The largest Kia model on sale in the UK, now fitted with plug-in hybrid power. The Kia Sorento may only qualify as ‘mid-sized’ in America, where it sits below the gargantuan Telluride, but on these shores, it’s one of only a few seven-seat SUVs capable of zero-emissions driving.

The Kia shares its 1.6-litre turbocharged petrol engine with the self-charging Sorento Hybrid, but gains a more powerful electric motor and a 13.8kWh battery pack that promises up to 35 miles of electric range.

With a combined 261bhp sent to both axles via a six-speed automatic transmission, this is the most potent version of the fourth-generation SUV, while CO2 emissions of just 38g/km also make it the most environmentally friendly. It qualifies for an 11% benefit-in-kind tax rate after 6 April, which should appeal to company car drivers.

All PHEV variants ride on 19in alloy wheels, versus the 17s found on the vanilla Sorento, and all come just as well equipped, Even entry-level 2 cars get LED lights, a digital instrument cluster, heated seats and a heated steering wheel as standard. Top-spec 4 models get extra niceties such as a head-up display, glass roof, Bose speaker system and larger, 10.25in infotainment touchscreen, and it is expected to prove more popular with private buyers, although the cheaper self-charging hybrid is likely to remain the best-seller overall.

The Sorento impressed us with a well-equipped interior and mostly comfortable ride when we road tested the hybrid version earlier this year, and this plug-in version sits relatively unopposed: the Ford Kuga PHEV makes do with five seats, the Volvo XC90 T8 costs considerably more, and the similarly sized Skoda Kodiaq is limited to combustion power only. 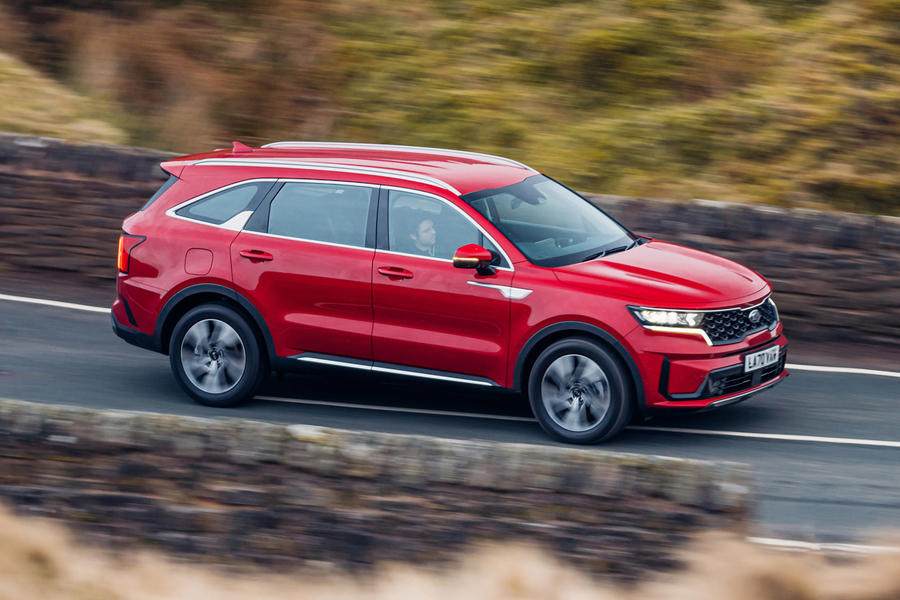 Just as substantial as the standard Sorento, both inside and out, yet it makes only the smallest of concessions to the self-charging hybrid model on boot space. Adults will continue to find the third row of seats perfectly usable.

The PHEV’s more powerful 90bhp electric motor is a far better match for the Sorento’s weight than the 59bhp unit found in the self-charging hybrid. Pulling away and driving at city speeds doesn’t require an especially light foot to prevent the petrol engine from kicking in. We comfortably managed 29 miles of electric driving on our mixed test route, so the average commuter shouldn’t struggle to get to work solely on battery power.

It of course runs silently when in EV mode, and once you’re at a cruise, the handover between electric and petrol is fairly subtle. Things become far more intrusive when attempting to overtake, though, arguably more so than in rival plug-ins.

Rolling acceleration is very good, given the Sorento’s bulk, but it is often indecisive at junctions as it chooses between petrol or electric power. This is less of an issue in Sport driving mode, where both motors work in tandem, although even here it feels quick rather than truly rapid. It's a shame this mode also makes the steering excessively weighty, which doesn’t play well with the overly keen lane assist function: intentionally steering over a lane dividing line can create an at times alarming elastic feel. And given how sluggish the wheel-mounted paddle shifters are to change gears, there’s little to be gained from truly pressing on.

This remains an SUV best enjoyed at a moderate pace. Larger wheels mean the ride isn’t quite as relaxed as in other Sorento versions, and body control can still wallow over more uneven surfaces, but it copes far better with the kinds of roads that SUVs like it tend to call home.

The raised driving position suits the Sorento’s character well, and the combination of metal-effect plastic and angular switchgear gives the cabin a premium appearance - even if it doesn’t necessarily feel like it to the touch. While the 12.3in digital instrument cluster is comfortably on a par with pricier rivals, the base model’s more basic 8.0in touchscreen feels a little off the pace, but there’s always Apple CarPlay or Android Auto if you prefer. 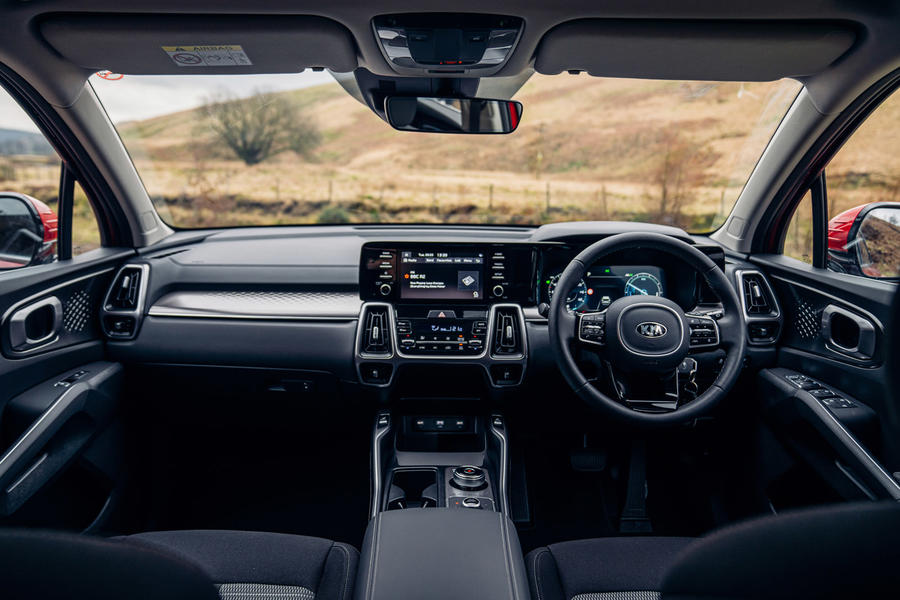 Anyone that requires seven seats and has the capacity to plug in at home would be wise to consider it. Current rivals may match the Sorento PHEV for efficiency or price, but not both.

With a thoroughly modern interior and even lower-grade models getting plenty of kit as standard, it better competes with more expensive alternatives than the previous generation did.

The maths may not add up for anyone unable to get the most from that battery pack, though, which might make the self-charging hybrid a more affordable alternative in the short term. 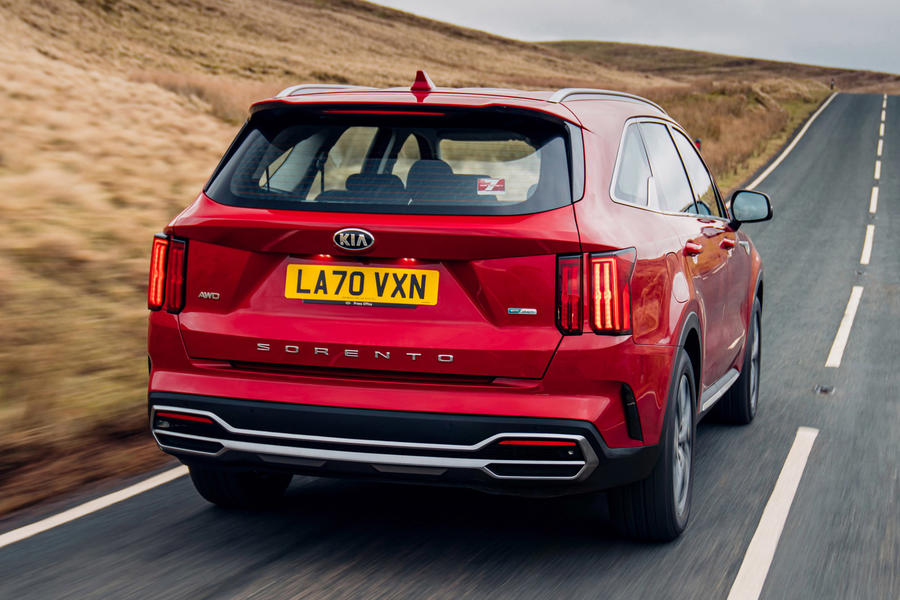 I'm surprised Autocar don't refer to the Discovery Sport PHEV as a rival? Smaller but 4x4 and 7-seats. And if you're going to mention the Kuga PHEV as a rival, why not also list the Peugeot 3008 PHEV, Citroen C5 Aircross PHEV or Vauxhall Grandland X PHEV? Or the 7-seat Peugeot 5008 PHEV which is coming soon?

FastRenaultFan 26 March 2021
Oh Nimmler your arragants knows no bounds. You really do not have a clue do you?
Kia are now one of the most reliable best built cars you can buy. They are decent to drive and very well equipped too as well as well designed. I have seen the new Sorento up close and it looks even better in the metal. The interior is very classy.
KIA have indeed made huge progress in the last ten years and definitely 20 years. You would have to be blind not to see that.
As for you saying they will only sell 3 of these you are so wrong. I would say they sell easily that many in a couple of hours so 3 × 12 so 36 a day maybe depending on the country. Maybe more inother countries and less in smaller countries but it is a huge success already and rightly so.
si73 25 March 2021
A typically handsome Kia that is competitive in its sector but in this case also happens to be cheaper than many as well. Not sure why some consider Kia as an unreliable brand, they fare better than most including many premium Europeans.
View all comments (9)