The Kia Optima GT, slated for introduction in UK showrooms in autumn 2017, is the most powerful production model that Kia has sold in Europe.

Part of the gradual process of moving the perception of the Kia brand upmarket and giving its cars more of a ‘developed in Europe’ handling feel, the Optima GT will become the second official performance derivative from Kia after the Ceed/Proceed GT of 2013. But it’s also the first such model to benefit from the influence of recently installed Hyundai-Kia performance car supremo Albert Biermann. And Biermann’s last job, in case you’d missed the rather eye-grabbing appointment, was engineering boss of BMW’s M division.

The story goes that Biermann asked to drive the latest prototype of the Optima GT when informed about its existence by his team of engineers in 2015 – only to be told he was actually driving it at the time of asking. “This is not a GT” is reportedly how he responded, promptly sending the car back through the development process and ordering a more transformative job to be done on the car, including suspension, braking, steering, engine, transmission and interior.

The Optima GT just launched in European markets is what has resulted: a car available as either a saloon or estate, with a 242bhp 2.0-litre turbocharged petrol engine, front-wheel drive, a near-150mph top speed and the potential for sub-7.5sec 0-62mph acceleration.

All of which may not quite sound like the stuff of boyhood dreams, but for Kia, it’s a bold effort to take on the brand equity and development expertise of some of Europe’s biggest industry powers in a market niche that it wouldn’t have contemplated entering 10 years ago. 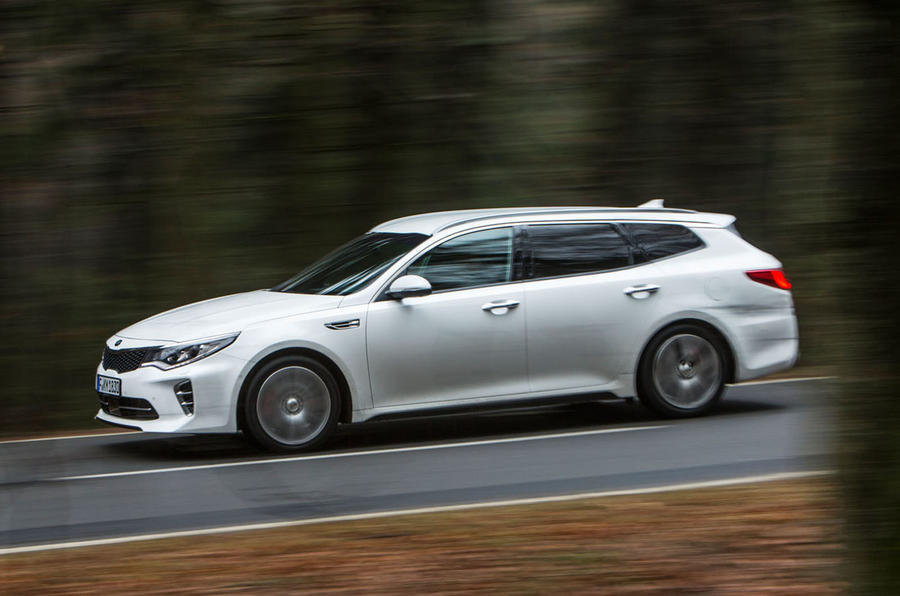 The Optima GT breaks ground for Kia by adopting a new proprietary adaptive damping system, whose re-engineering for right-hand drive is the reason for the car’s relatively late arrival in the UK. The suspension springs have also been shortened and stiffened relative to that of a normal Optima, its front anti-roll bar stiffened in line, its electromechanical power steering set-up retuned for greater responsiveness and feedback, and its brake discs enlarged and uprated.

Kia’s go-faster upgrade for the cabin is apparently less wide-ranging, though – and it does little for an interior that looks plain in as many places as it plays up to the senses. The ‘GT’-stitched leather seats seem somewhat hard and flat in the cushion and lack width in the squab, failing quite to grip you like a sports seat really should. The instruments are rather dowdy by performance design standards, too. In other respects, the Optima GT’s cabin is roomy, comfortable and well equipped, but it could just as easily belong to a high-output diesel.

The 2.0-litre turbo petrol engine starts at the press of a chromed starter button and idles quietly, but it wastes no time in raising its voice as the car sweeps up to town speeds. You’ll quickly sense why this is on your first trip beyond medium revs: it’s not engine noise you’re hearing but rather the overtures of Kia’s dashboard-mounted Active Sound System ‘sound actuator’ (as if avoiding calling it a speaker somehow makes the electronic skullduggery more acceptable). This a pretty brazen attempt to make the car’s four-cylinder engine more rich and interesting on the ear, but both in Normal and Sport driving modes, it’s simply over-cooked. It's loud enough to sound decidedly awkward and contrived. And, unfortunately, there’s no volume knob – nor an ‘off’ switch. 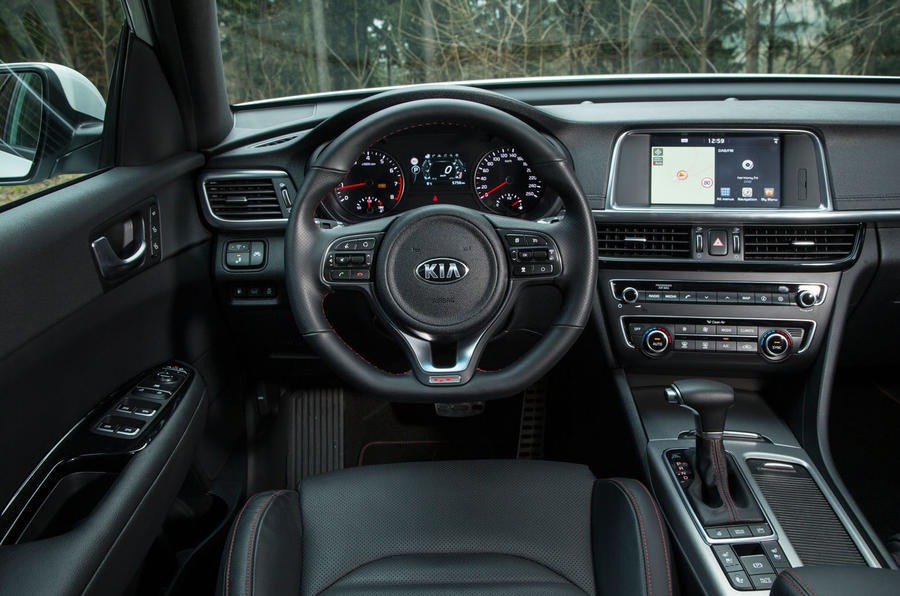 The engine itself is more than potent enough to give the Optima a brisk turn of speed. It revs freely to beyond 6000rpm, but it’s a fairly conventional four-cylinder turbo in as much as it’s at its best hauling the car along from lower-medium revs.

But the engine is paired to Kia’s own six-speed automatic gearbox (there’s no manual option), which seems a bit stretched when asked to handle a performance application. The transmission works respectably well in part-throttle roll-on acceleration, but its speed of operation and lock-up characteristics are inconsistent. At low revs, it can feel slushy and elastic, and in manual mode, it often handles downchanges in a delayed and abrupt fashion. It’s a gearbox that doesn’t respond well to being driven keenly, although it does a decent job when you’re in no particular hurry.

We’ll keep impressions of the car’s ride, handling and steering short and sweet here for two reasons. Firstly, because the 18in rims of test car were fitted with winter tyres and UK cars will come on proper European-specification sporting rubber; and secondly, because the adaptive dampers will receive a bespoke software tune for UK roads.

On the European suspension settings, the Optima GT’s ride is quiet and fairly compliant in the car’s Eco and Normal modes, but there’s always a firm, niggly edge to it that’s quickly exposed by an uneven surface. In Sport mode, the picture gets firmer and more fidgeting still – and bothersome enough to begin to undermine the car’s credentials as a long-distance cruiser.

The grip levels of our test car were limited and its steering feedback muted, as you’d expect on those winter tyres. However, body control was respectable enough to suggest that the car might feel significantly different on its original-fit tyres.

Kia insiders suggest that the Optima GT will be sold in two trim levels, the cheaper of which should give it a list price a whisker away from £30,000. Which sounds reasonable enough. Sporty family saloons of this size don’t amount to the thriving market niche they once did when the likes of the Ford Mondeo ST220 and Honda Accord Type R were around, leaving the car few direct rivals.

Few – but not none. Even at that fairly affordable level, there are the likes of the Skoda Octavia vRS and the Audi S3 saloon to keep the Kia honest. And on this evidence, the Korean firm has a way to go before it’ll finally achieve its ambition and beat the Europeans at their own long-practised performance-fettling game.

Admittedly only on first acquaintance and with much about its true dynamism still to be established, the Optima GT feels very much like a car from a manufacturer still feeling its way into one of the more sophisticated and challenging parts of the European car market. It’ll clearly take more than a high-profile fugitive engineer from Bavaria to change that.

I love the design of the Optima and enjoyed a US version as a hire car last year.

Kia is charging to much and will fail.

Remember Skoda? For a long time their cars were cheap because, although they were great, they still had to convince those of us that grew up with the Estelle!

Kia needs to make this cheap to get people driving it. Once they do, and assuming they like what they get, word of mouth will allow them to charge more for the next version. It's not as though the last Optima as a massive success.

As other comments suggest there is much better out there for this money.

I had high hopes for this car, but the co2 rating isn't great - although I guess the mpg will be near enough correct unlike other brands.

Shame - I was looking forward to it but on this report it needs work. Maybe there will be a refresh before it hits our shores, also testing it on winter tyres isn't going to help.

Biermann needs time. This model was already on the road when he arrived and he hauled it back and gave it some cred. But I think we will need to wait three years for the real M chasing Optima. Kia is ambitious. The basics are there. Fit and finish (not mentioned in this rather torrid report) is as always excellent. Paint finish is nigh on perfect and the car will be rattle free and under normal driving conditions rather pleasant. But as the man said "This is NOT a GT" we will have to wait. Wifey is chuffed to bits with her new Soul which on winter studded tyres gives her great security on ice and snow covered 120km round trips daily for work
View all comments (9)