From £90,0858
Share review
Super-saloon is super slick, dynamic, luxurious and fast in a straight line, but the XJR 575 lacks the modern sophistication of its newer, fitter rivals
Open gallery
Close

Following a left-hook drive in the aspirational climes of sun-drenched Portugal, we’re now sampling the XJR 575 (as in 575PS, or 567bhp) in right-hand-drive form in the more pragmatic context of a slushy December morning near Slough.

As a refresher, the XJ engine line-up includes two 3.0-litre V6s: a 296bhp diesel and 335bhp petrol, both of which can be had in standard-wheelbase or long-wheelbase form, the latter with an extra 125mm between its axles. Then there are two versions of the evergreen range-topper, the 5.0-litre V8 with a twin-vortex supercharger: the 503bhp LWB Autobiography and the SWB 575 we’re driving today.

All models use 8HP-series eight-speed torque converter automatic gearboxes from ZF and are only available with rear-wheel drive in the home market.

In addition to the extra, ECU-liberated grunt, the 575 is differentiated from the previous XJR by the likes of special kick-plates, diamond-stitched leather upholstery and ‘575’ badges inside and out. 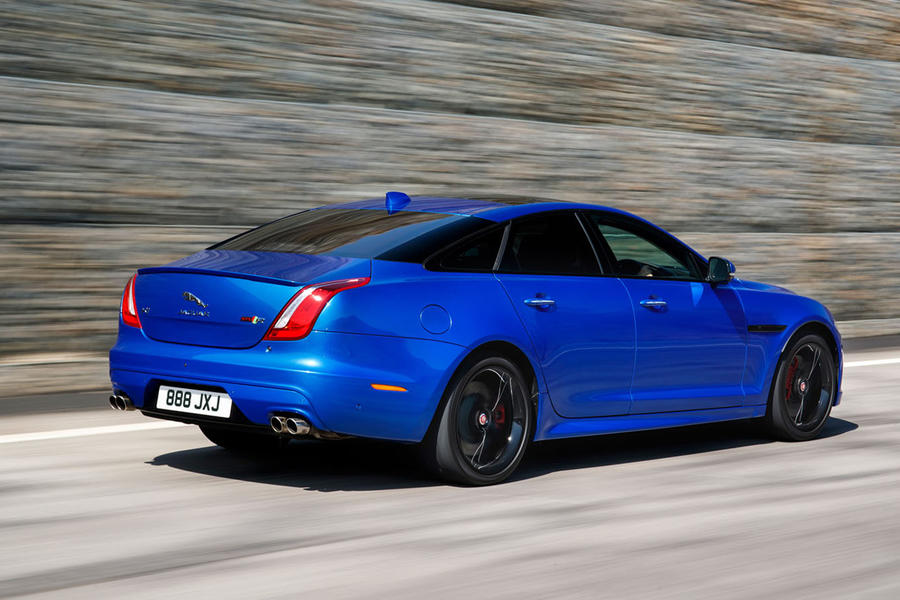 Alumni of early 1990s video gaming may recall a ripping piece of work by Bitmap Brothers called ‘Speedball 2: Brutal Deluxe’. The latter two words sum the XJR 575 up nicely. Few would have bemoaned the previous XJR’s pace, managing 0-60mph in 4.4sec with an electronically limited 174mph top speed, but the 575 cuts 0.2sec and adds 12mph to those respective figures, yet still provides a ritzy interior and impressive comfort.

The adaptively damped XJR may shuffle around on quite tatty roads, but even big ridges fail to cause significant disruption, while long-wave bumps are taken with the accomplished nonchalance that you’d hope for from a 5130mm-long limo.

The steering is even more polished. Electrically assisted since 2015, the tiller is slick but suitably heavy for a car of this size and even provides decent road feel, yet is reassuringly settled at a cruise. Turn-in isn’t razor sharp but still usefully swift, while body roll is very tidily curbed, surely thanks in part to the car's half-sensible, sub-1900kg kerb weight.

In a turbocharged age, the XJR’s supercharged V8 is a real indulgence, for its ready throttle response as much as its generous power band that extends from 2750rpm to the 6500rpm redline. Acceleration is enormous, but the blower makes power delivery predictable, too, which is a blessing on today’s cold, wet Tarmac, on which the rear tyres regularly scramble for traction. The soundtrack remains relatively muted, but its pleasing growl-and-whine duet majors on quality more than volume. Downshifts could come sooner after you’ve tapped the left-hand metal paddle, but upshifts happen more quickly, and the ZF ’box generally marshals the powertrain well.

The XJR’s interior is full of leather, Alcantara, carbonfibre, gloss black plastic and chrome. It certainly looks the part, but it can’t be spared the agonisingly regular reference to German superiority when it comes to quality.

The newly reupholstered seats, which can be set brilliantly low for a large saloon, are plenty adjustable and lend lots of lateral support. Rear space is merely passable for a six-footer sitting behind another, though, with only fair leg room, just enough head room and a big old C-pillar next to your face that conspires to make it a darker space than you’d prefer. Boot volume is very similar to that of the Audi A8, BMW 7 Series and Mercedes S-Class, although its shape is somewhat irregular and its aperture could be wider. 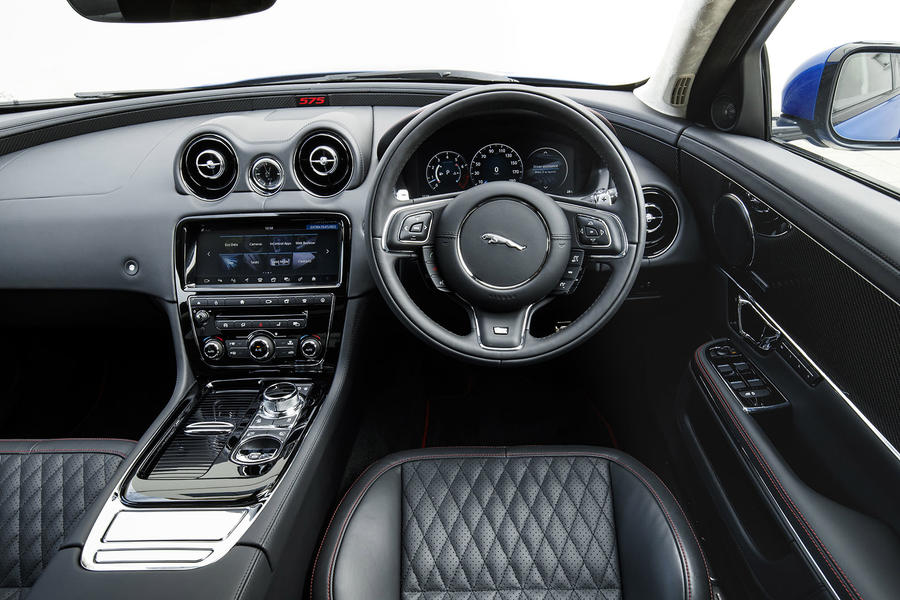 If the XJR was already on your radar, the 575 only enrichens the proposition. For just £1055 more than before, it’s quicker – without affecting fuel economy or emissions, says Jaguar – and, like the rest of the revised XJ range, benefits from an improved infotainment system with a larger, 10in touchscreen featuring pinch and zoom, 4G wi-fi for up to eight devices and new driver aids including lane departure warning with lane-keeping assistance, forward detection warning and fatigue sensing.

The closest S-Class, 7 Series and Porsche Panamera are cleaner, cheaper, newer and more technologically advanced, but the XJR 575’s charismatic powertrain and combination of handling, fluidity and comfort still make it a justifiable choice in this rarefied segment. 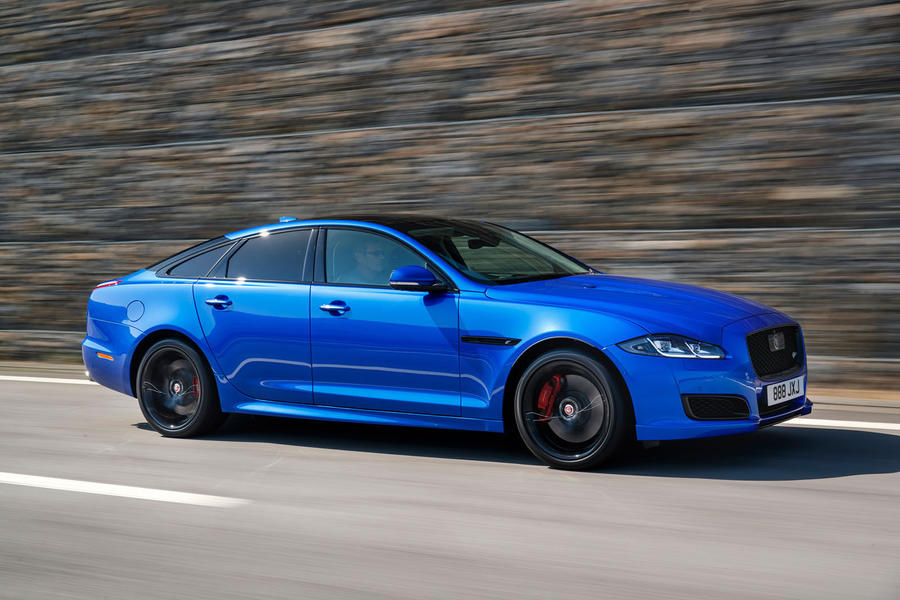 Saw one of these in

Saw one of these in Sainsburys car park the other day - to say it stood out from other cars is an understatement - real attitude in blue with darkened glass and dethroning.
dipdaddy 20 December 2017

I still feel it looks modern

I still feel it looks modern and fresh even by today's standards. It's a unique offering in style inside and out. the only issue I have is those quad exhaust - just get rid of them! they don't flow with the surface of the body work and stick out a bit too far. I'm sure they could do better than that.

I'm still no fan of the exterior. Still liking the style inside.

8 years after it's launch and I'm still no fan of the exterior styling, well from the B-pillar back, which I think is awful looking. As for the interior though, while the quality of the lot of the materials is really very poor for a car in this class (and that's from first hand experience), in terms of styling I like it a lot. Sure, it's looking dated but it still imparts style, desirability, luxury and warmth.