From £27,0657
Range-topping four-pot petrol motor doesn’t do much for Jaguar’s revised compact exec, but other engines might be the clincher for an improved package.
Open gallery
Close

Jaguar is a car maker so instinctively associated with saloons that it’s near impossible to imagine a future for the firm without them; and yet I bet there are plenty of product strategists at the company’s UK headquarters right now who are being paid to do exactly that.

Right now, Jaguar’s more traditional executive four-doors just aren’t doing enough business – and with pressure mounting on the firm to cut costs and only to back winners, the worry must be that the current XE, XF and XJ may never hit the sales heights necessary for all of them to be worth a place in a rationalized, revitalised range of future models.

And so for the maker of the original XJ and mkII of the 1960s, both celebrated, formative, world-class four-doors of their day, the great modern saloon-car gamble by which it dared to square up to its German opponents is looking increasingly at risk of being declared a dead loss. The XJ barely managed 5000 units last year. When the XE was launched in 2015, it was notable that chief among the saloons whose sales it stole was its bigger brother – the XF. Global production of XF and XE both only narrowly made it beyond 30,000 units in 2018. None of it makes particularly heartening reading.

So what new success can Gaydon’s 2020-model-year XE bring to the table, to prove perhaps that the company’s latest confident swing at the compact executive saloon market wasn’t such a misguided one? Well, to be fair, it needn’t sell like a Mercedes C-Class (nearly 400,000 units in 2018, since we’re counting). Another couple of 50,000-unit years, however unlikely that outcome may look now, would probably earn it a reprieve from the chop. And perhaps with that kind of achievable success in mind, Jaguar’s mid-life update for the car looks like a very carefully considered and targeted one.

The most important constituent part of that update may yet prove to be a revised 2.0-litre, 178bhp Ingenium diesel engine with European ‘RDE2’ diesel NOx emissions certification, which means that – for a while, at least – the all-important diesel XE will dodge the four percent company car tax penalty generally imposed on diesel fleet cars, and which its rivals currently all fall foul of.

Styling changes to the exterior are limited to headlights and bumpers. That’s because it’s the XE’s interior that has occupied the lion’s share of Jaguar’s facelift budget and attention – and rightly so, since it was probably the pre-facelift car’s biggest weakness. 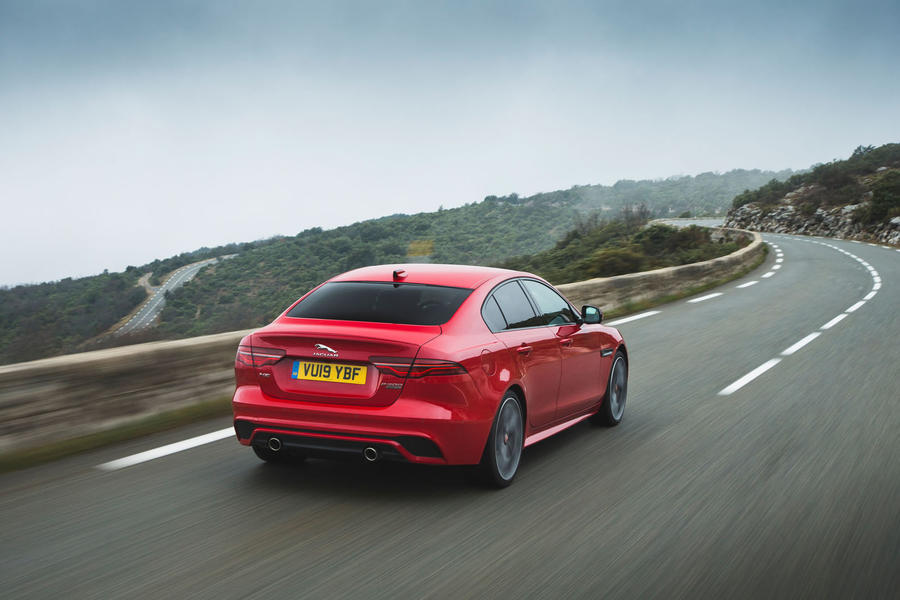 The new XE gets more soft-touch materials, more expensive veneers, a new centre console design, a new steering wheel, a digital instrument binnacle, and (as an option) a double-deck ‘Touch Pro Duo’ infotainment setup closely related to the one on the i-Pace and the Range Rover Velar and Evoque.

It’s all made a significant difference to the car’s sense of ambient perceived quality, technological sophistication and luxuriousness, without making enough of a difference to attract worried looks from the class’ governing German oligopoly. The XE’s cabin is now one ridden of almost all of its cheaper materials, and not without a few tactile, expensive ingredients such as aluminium shift paddles, ‘metalised’ indicator stalks or the F-Type-sourced gear selector lever. It’s not a car that stands out for its interior classiness, in the way that an Audi A4 or Mercedes C-Class does; but neither is it any longer a car, like the Alfa Romeo Giulia, that you’d criticize for seeming low-rent. It has progressed.

Another key part of Jaguar’s interior rethink was a redesign of the car’s interior door panels, done in order to make some extra lateral space in a cabin that has always needed every extra inch it can get. The effort has yielded some success inasmuch as your elbows and needs don’t feel so closely confined in the car as once they did; but headroom is still tight up front, and the back seats remain usable only for smaller adults and children, really.

Jaguar has cut down on the number of engines in the XE range: where there used to be six, for now there are three – and there’s nothing larger than two litres and four cylinders to be seen. The car was made available exclusively in range-topping ‘P300’ 296bhp 2.0-litre four-wheel drive petrol guise for our initial test drive; a car, it turns out, significantly different from the supercharged, rear-driven, six-cylinder XE S that marked out the highest rung of the XE hierarchy a few years ago, and which helped earn the Jaguar such praise from keen drivers.

There’s a purposeful growl but little richness or smoothness apparent from that four-pot engine when you extend it. The car’s outright performance level is strong, but not outstandingly so; I would guess a BMW 330i, some 40 horsepower down on the XE on paper, is just as fast on the road, and an Alfa Giulia Veloce perhaps a shade quicker. Both rivals are, after all, notably lighter.

But it’s actually the XE’s four-wheel drive, eight-speed automatic transmission that’s the greater obstacle to your enjoyment of the driving experience than that engine. The gearbox can be a little bit slow to shift in manual mode, and also annoyingly indecisive and given to hunt when left to select gears by itself. Moreover, it seems to impart a slight but noticable treacly sense of drag to the car’s every response to a demand for greater speed, and feels a bit rough and clunky when changing ratios at times; as if unnecessary force was being wound into the driveline somewhere, never to quite make it out onto the road.

It’s a sense that the XE’s real-world fuel economy would tend to confirm. Over several trips, all of which included both quicker driving and slower, we failed to see more than 25mpg returned - which is the sort of economy you might have indulged from the old V6 S, but would likely be less inclined to of this car.

It’s a good job, therefore, that the XE’s four-wheel drive system leaves the car’s calling card – its fluent, balanced, entertaining handling – unharmed. Even allowing for the shortcomings and limitations of the powertrain, this remains a really absorbing car to drive on a twisty stretch of road.

It feels a touch heavier, softer and less naturally agile than an Alfa Giulia, but it’s more supple, tactile and progressive-handling with it, so you can place it more instinctively. Jaguar’s four-wheel drive system might make for a less sweet on-the-limit handling balance than the XE S once had, meanwhile, but I dare say most drivers would accept that in trade for the added traction and security it brings. 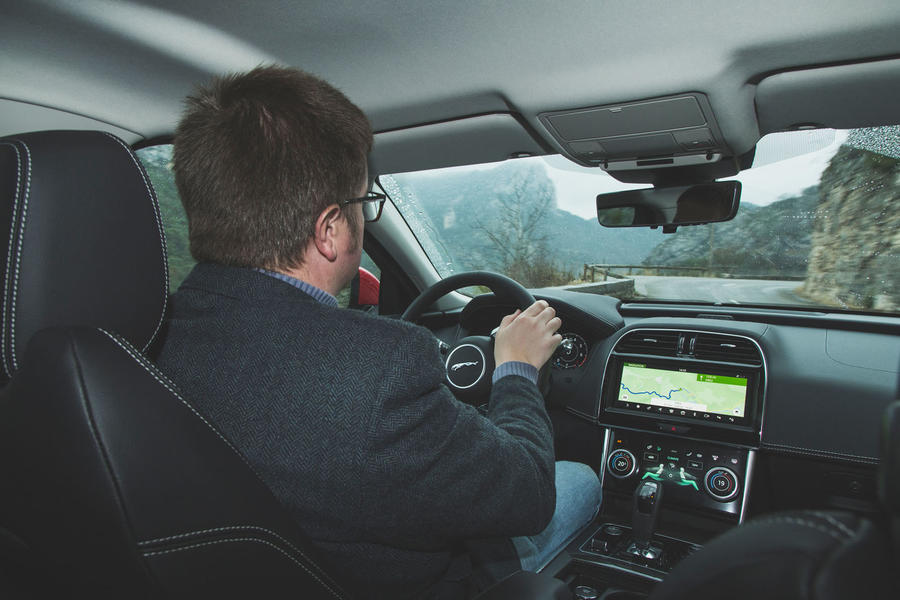 All up, much as I’ll admit to being disappointed by the XE’s range-topping powertrain for a few reasons, I’d say the versions of the car more likely to be on the average customer’s shopping list should be better-placed to impress than they used to be; and that the XE’s suitability for lifting the mood of your everyday motoring, while still not without caveat, ought to be stronger, too.

On this evidence there’s good reason to hope for that – but we’ll see.

A lot will depend on that revised diesel engine, on which we look forward to reporting when we can. Until then, much as life will be tougher for this car than ever it used to be, it seems all may not be lost for Jaguar’s junior exec. Here’s to holding your nerve. 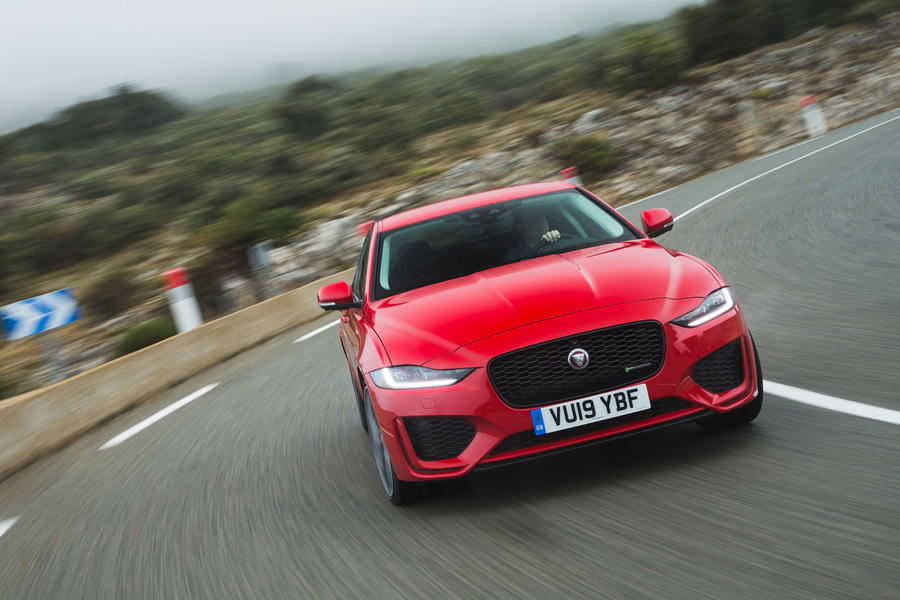 I went on to the Jag website in order to configure one of these. I thought it was very expensive for what it is. Interestingly, according to the website, the 200bhp version was not mentioned. Still many extras required to spec it up (imitating the Germans!).

Clearly made to battle the giulia

After driving and test driving this whole set of cars- BMW 330i, Audi S4, Jag XE, I plumped for the Alfa Giulia Veloce. It leaves all of these for dead in the driving stakes- seriously. Of all of them, the jag felt the most leaden, heavy and dull. Felt nice, looked great, but felt like a transit in comparison. The BMW was good, but not many superlatives you'd add. The Audi was solid and felt quick but there's so many of the german cars that I wanted Jag or Alfa.

The Alfa has definitely got under the skin of JLR as they've spent millions on the crazy "road (ish) legal" verson to get the N Ring record and now this, matching in every way the giulia veloce. However a drive of both will leave you going for the italian I'm sure.

After driving and test driving this whole set of cars- BMW 330i, Audi S4, Jag XE, I plumped for the Alfa Giulia Veloce. It leaves all of these for dead in the driving stakes- seriously. Of all of them, the jag felt the most leaden, heavy and dull. Felt nice, looked great, but felt like a transit in comparison. The BMW was good, but not many superlatives you'd add. The Audi was solid and felt quick but there's so many of the german cars that I wanted Jag or Alfa.

The Alfa has definitely got under the skin of JLR as they've spent millions on the crazy "road (ish) legal" verson to get the N Ring record and now this, matching in every way the giulia veloce. However a drive of both will leave you going for the italian I'm sure.

Interesting what hat you say about the Alfa. I didn't have any luck trying to test drive a petrol version but did have a go in a diesel. Not that I wanted a diesel. Steering was excellent. In the end bought another Audi because couldn't be bothered having to wait.

A missed opportunity. One third of sales of the OLD BMW 3-series were hybrids; do Jaguar take no notice of the outside world?

The WLTP figures will surely rule this car out for most company car users.

A missed opportunity. One third of sales of the OLD BMW 3-series were hybrids; do Jaguar take no notice of the outside world?

The WLTP figures will surely rule this car out for most company car users.