From £27,0658
3 Series chaser now has greatly improved looks and equipment, and is better in other ways too
Open gallery
Close

This is an extremely important car for Jaguar: the carefully crafted mid-life revision of a compact executive saloon they launched in mid-2015, full of hope, to challenge the BMW 3 Series and Audi A4.

Despite its sleek shape, excellent dynamics and some class-leading engineering content (an aluminium body shell, an ultra-sophisticated rear suspension), the Jaguar XE failed to set the market alight. Reviews were positive, but buyers have continued to prefer German products.

Though the car’s poor sales coincided with a general decline for saloon models, it still mystified the company and dealers alike. Everyone who drove it agreed this is fundamentally a good car. But the company – doubtless with helpful reactions from early users – eventually put the difficulty down to the exterior’s similarity to the larger Jaguar XF, and to a lack of style appeal. And against rivals it has seemed drab inside. 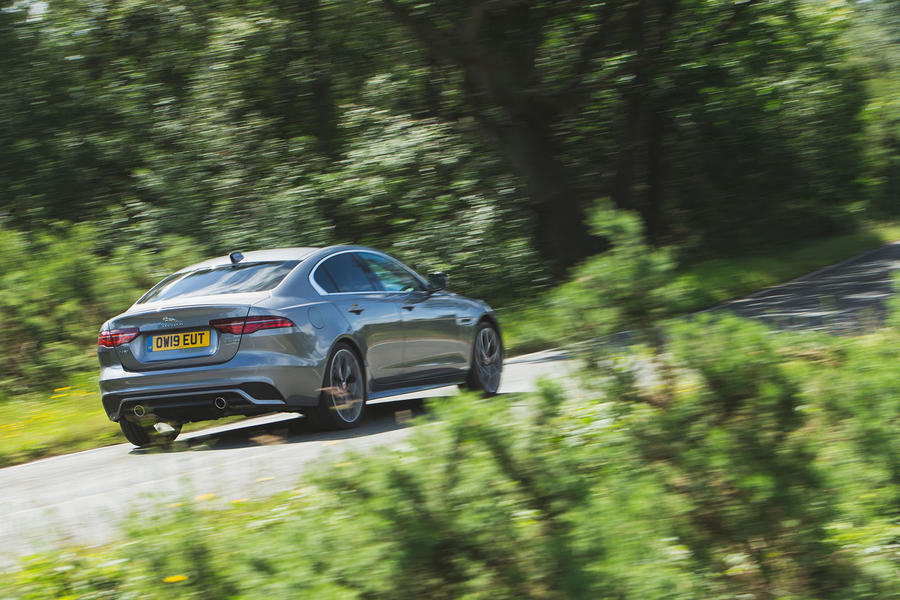 First, the exterior visual impact has been abruptly improved. Sportier bumper designs and new LED lights front and rear have made the car look sportier, more planted and above all more modern. The latest XE also introduces a new 'chicane' tail light style which will flow through the range.

Inside, the XE adopts JLR’s Touch Pro Duo infotainment system which introduces a 10.2in screen to mid-dash, and supports it with a smaller touch-screen below. This treatment simplifies and modernises things markedly. The 'twist' gear selector gives way to Jaguar’s sportier and more intuitive central lever. There are upgrades for both the interior and seat materials (owners felt that in the outgoing XE version the need to cut costs was made too obvious) and there’s a new richness about the trim that improves its apparent value. One drawback remains: very confined rear seat space. Kids and very small adults are the best it can comfortably do.

Under the skin little has changed – or needed to change – though EXs are now offered with only three 2.0-litre turbo Ingenium engines (one 178bhp diesel; petrol units producing 247bhp and 296bhp) and all models get ZF’s efficient, market-leading eight-speed automatic. The highest output engine comes as standard with Jaguar’s unobtrusive intelligent all-wheel-drive system that usually biases torque towards the rear wheels (for handling balance) but directs it forward when rear-wheel grip is limited. According to the maker’s spec, the system adds only 85kg to a full-house XE’s kerb weight (1650kg vs 1565kg) so there’s little change in the car’s feeling of all-conditions agility.

Our 2019 test car was a P300 AWD, a 296bhp edition with the standard all-wheel-drive transmission, capable of a 0-60mph sprint of just 5.4sec, and a governed top speed of 155mph. The XE’s sleekness and low driving position give it the 'cheap Jagaur Jaguar F-Type' character we’ve spoken of before, especially since the precise, perfectly weighted steering is as good as Jaguar’s best. The car felt instantly familiar alongside our outgoing edition (2wd, 198bhp) except for two key matters: engine response and ride quality.

For a 296bhp engine packing 295lb ft of torque (between 1500rpm and 4500rpm) our sub-1000-mile powertrain felt inert, a serious concern until we remembered previous advice from JLR engineers that this car’s major components – engine, gearbox and AWD system – need a few thousand miles or so to give of their best. That was certainly the case for our outgoing 198bhp version, which felt quick and free-revving when it left us with 10,000 miles on the clock.

Though Jaguar says it has made very few changes to the suspension, the new XE feels more refined and quiet, offering improvements to rolling comfort, to the level of road noise and to the absorption of big bitumen bumps, so common on UK B-roads. Even on 20in wheels and performance-oriented Pirelli P Zero tyres, the car now feels much more premium, and considerably more comfortable over long mileages. 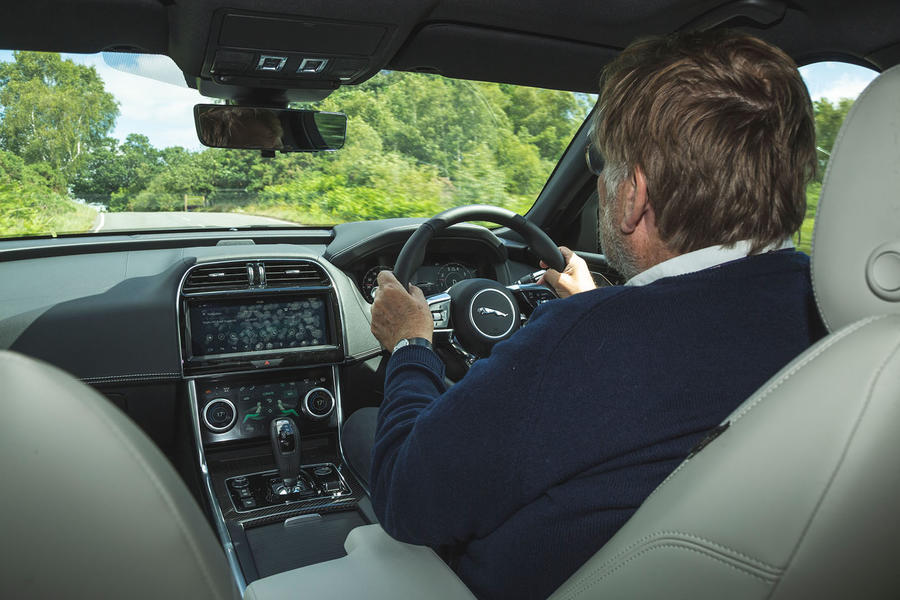 There has always been a good case for owning a Jaguar XE, and now there’s a better one. The revised car’s exterior now has far more presence, while the interior conveys value (and has the benefit of the more advanced infotainment system), The steering and handling that contribute so much to its driving enjoyment are unaltered, but there’s a new level of ride refinement.

In short, Jaguar has not harmed any of the XE’s previous points of appeal, while adding important new ones. 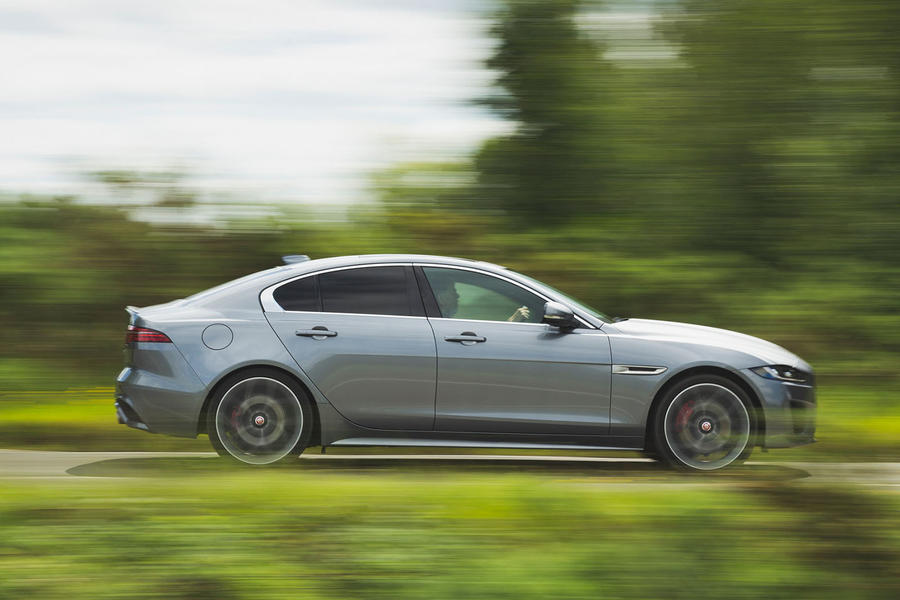 Have had a XE R sport for 3 years, faultless and reliable, great on a long drive, much better than a C class on a drive, seats are way better in the jag, and the suspension is better than the beemers, I had a 6 series and have driven others, currently we have a C class Amg cab as well and had a previous one.

Have just ordered the XE R dynamic P300 in grey to replace my white one.

Plenty of space and reliable

As the owner of  a new  pre facelift xe 20t  since October I have had zero reliability problems no rattles or sweaks and for the record came from a Mazda 6 tourer so was used to more space and that's never been an issue my wife and twelve year old or any other passenger for that matter have never complained about space infact friends who have a BMW 320d and Mercedes cla both say how much nicer the interior is compared to their cars. My daughter took up double base the week after my car came  and it fits in the boot with split seat down fits my families needs perfectly.

Jaguar need to market differently and get bums on seats as when my wife and I test drove it we were sold BMW Mercedes and Audi are now the rep company car the new mondeo and vectra of or time if well engineered. Apart from the Mazdas I have had the BMW Audi and volvos of the past have all had many faults and visits to the garage so in my experience so far the jaguar xe is reliable and well built !

@6th.replicant I think the cabin quality is what they have really concentrated on this time around. I don't think it is stylish, but the percieved quality is supposed to be higher.

Personally, I the problem with the XE is the looks and image. I really want to love the XE, but I just don't. It has never looked right, and the update doesn't improve enough. I remember thinking the rear looked like a 1990's Honda Accord, and it still does.

There has been no proper halo model either, the SVO aside, where was the M3 rival? And why has there not been an XE coupe? Or Estate? My mate's dad has own XF's and XE's, and he percieves Jaguars as old man cars, even still. And that is a big issue for many.

Another issue is the XF. It is bigger, but it looks identical. You know the only way I can tell if one I see on the road is an XF or XE? By the XF's extra side window. I play a game to see if I can guess which one it is that is approaching me, and I nearly always get it wrong! I know BMW/Merc/Audi all do the russian doll styling, but there is a lot more small details to deferiantiate them on the road.