From £27,0658
Even with a downsized four-cylinder in its lowest state of tune, the XE continues to deliver dynamics better than any rival
Open gallery
Close

By now you’ll be familiar with Jaguar’s very first junior sports saloon, which is seen here in 2019 model-year guise, equipped with the entry-level petrol engine.

In fact this is the only petrol engine now available in an XE, the old supercharged 3.0-litre V6 having died a death from stringent new emissions regulations and poor sales. It means there’s no 375bhp XE S for those who want to just about keep in touch with a BMW M3 but do it without the animalistic looks – and that’s a shame.

Alas, we’re now limited to a downsized four-cylinder option offered in three states of tune. That means 197bhp, 247bhp or a range-topping ‘30t’ 296bhp. The last of those is lifted from the baby F-Type and also features in the new four-wheel-drive XE 300 Sport – the variant intended to cast across the range a much-needed halo effect and that we’ve already driven, and liked.

A drop in demand for diesel may have resulted in Jaguar trimming production at a key plant to three days a week but it still accounts for half the model line-up. Just as for petrol, there are three versions of the 2.0-litre Ingenium turbodiesel, ranging from 161bhp to a twin-turbocharged 237bhp. We’ve had misgivings about the refinement of these engines in the past, but if fuel economy is still your priority, the base diesel’s combined 58.9mpg comfortably exceeds the 39.2mpg of its petrol equivalent.

Elsewhere, for 2019 the changes are subtle, as you might expect with a proper facelift arriving next year. All XE models are now equipped with Jaguar’s 10-inch Touch Pro Infotainment system – previously a £1610 option – and there are metal treadplates, chrome switches for the seats and a frameless rear-view mirror. And that’s it. 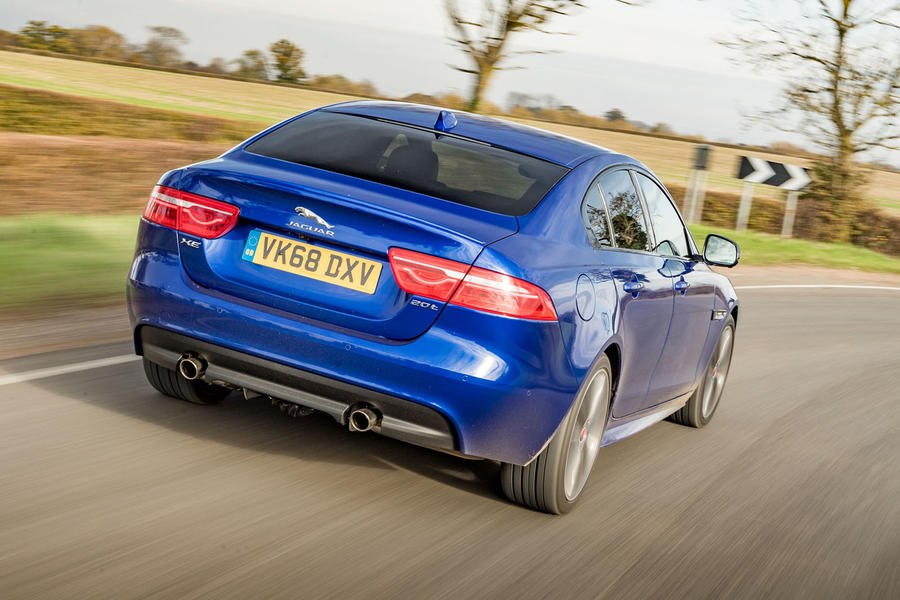 Still handsome, and still excellent to drive. The Jaguar XE has been with us for nearly four years and there are things – chiefly dynamic – it continues to do better than any rival.

The steering action is light but crisp and for an electrically assisted set-up strikes a fine balance of communication while filtering out interference from our pitted roads. Those familiar with a 3 Series will find it wonderfully damped and controlled and yet there’s little of the numbness you’ll find in the comparable Audi or Mercedes. Granted, a slightly smaller rim and a traditional hydraulic set-up would be even better, but those fuel-consumption targets aren’t going to hit themselves.

This chassis – with its double-wishbone front and integral-link rear suspensions – also remains at the sharp end of the field. The XE doesn’t change direction as flatly as some rivals, or develop quite as much grip, and yet it’s probably the most satisfying to put around a corner because it never relinquishes an overt rear-driven balance. The roll-rate is well judged, too, and makes the car a painless pleasure to flow along a wide range of British roads. So far, so XE.

R-Sport models come with passive dampers but the set-up is sweet enough to make you wonder why you would bother with the adaptive option. Even on this car's optional 19in wheels – an inch larger than standard – rarely if ever does the XE crash but there’s also precious little float unless you’re carrying considerable speed. The manner in which it’ll becalm a B-road really is remarkable, and Jaguar also seems to have diminished the effects of road-roar and engine chatter with its improvements to sound insulation.

Performance? With an eight-speed ZF auto smoother than it is quick, it’s good enough for easy overtaking but nothing more, as you might expect of a 1600kg saloon with the same output as the latest Ford Fiesta ST. Alfa Romeo’s Alfa Romeo Giulia 2.0 – identical in terms of power – is a whole second quicker to 62mph, so Jaguar has work to do on this front, and the four-cylinder engine in the new 330i is not only more powerful but far less thirsty, at 44.8mpg combined. Were the race to the red line in the XE an electrifying affair, we might accept those compromises, but it isn’t, and we shouldn’t.

The interior also feels slightly adrift of what the Germans are offering – both in layout and in perceived quality. The driving position is class-leading, not least because there’s generous adjustability in the steering column, but why should the place feel a touch claustrophobic? Those who crave the sporting vibe might like that, but a greater sense of space would complement the XE's long-legged qualities. 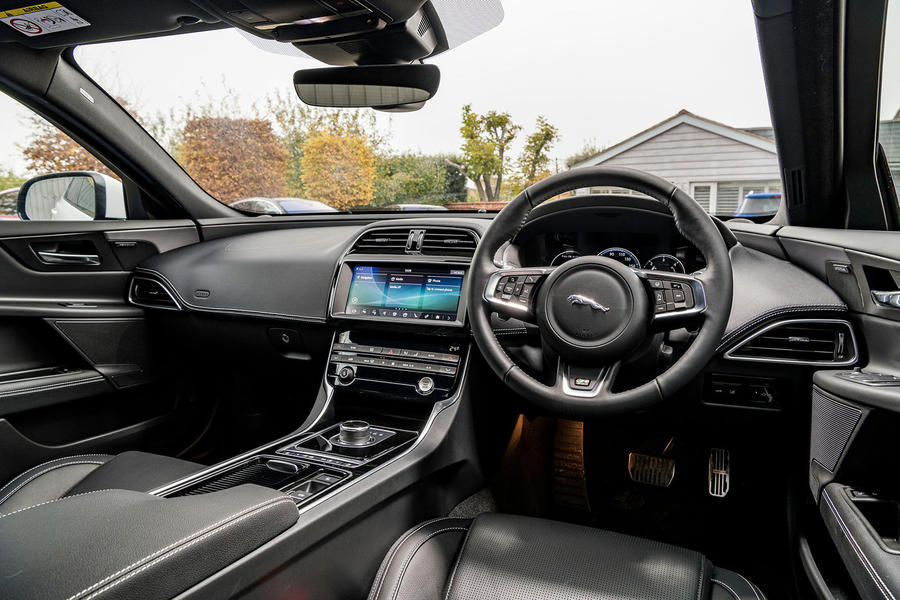 A new 3 Series arrives next year. It’ll be lighter and stiffer than before, and with extra attention lavished on the suspension. Given BMW wants this car to land an emphatic riposte to the handling appeal of the Jaguar and Alfa’s excellent Alfa Romeo Giulia, it’s worth waiting for.

In fact it’s worth waiting even if you’ve set your heart on an XE. The facelift will be with us in the summer with meaningful updates to the exterior design and, more significantly, to interior materials quality and technology. Mild hybridisation courtesy of a 48-volt system should also address the XE’s lagging fuel economy, though that seems something of a sticking plaster next to the Ingenium engine’s inherent inefficiency. A bit more rear passenger space would be helpful, too.

As for the chassis, Jaguar must tread carefully with the XE. It’s an absolute peach, and no other car in this class carries off such a blend of poise and refinement. 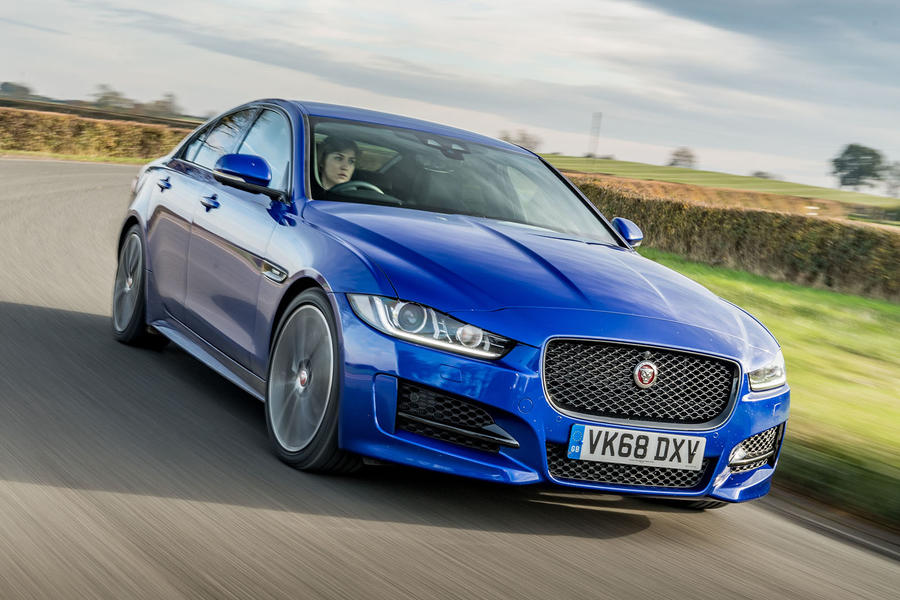 Please confirm if this can be done legally .?

..there ain't a strix, what is all this with 4 cylinders same goes for the Alfa and any others...no, no, and no. I could live with a dated interior etc if the ride and handling are above average but with a hatchback engine...sorry no can do.

Rodester is a comic genius

I always look forward to your posts - brilliant!