From £32,1658
The all-wheel-drive version of the Jaguar XE gets a new range-topping 236bhp Ingenium diesel engine in a bid to take on the powerful oil-burners from the likes of Audi, BMW and Mercedes-Benz
Open gallery
Close

Jaguar Land Rover’s new range of Ingenium diesel engines, first seen on the Range Rover Evoque and Land Rover Dscovery Sport, have now made their way into the other half of the business.

The range-topping unit is a 236bhp four-cylinder twin-turbo, which has been fitted to the all-wheel-drive version of the class-leading Jaguar XE saloon. That AWD version was introduced last year as Jaguar’s next step to expand into markets dominated by the likes of Audi, BMW and Mercedes-Benz.

As before, the drive system is rear-biased, diverting power to the front wheels when needed. And, as before, there’s a cost to the AWD system: weight. In fact, adding in the twin-turbo and extra bits of the engine means this version of the XE weighs 1650kg; an increase of 35kg over the 178bhp diesel that previously topped the range. But this is offset by that extra 58bhp, which increases the top speed from 140mph to 155mph and, at 6.1sec, is 1.8sec quicker to reach 62mph. 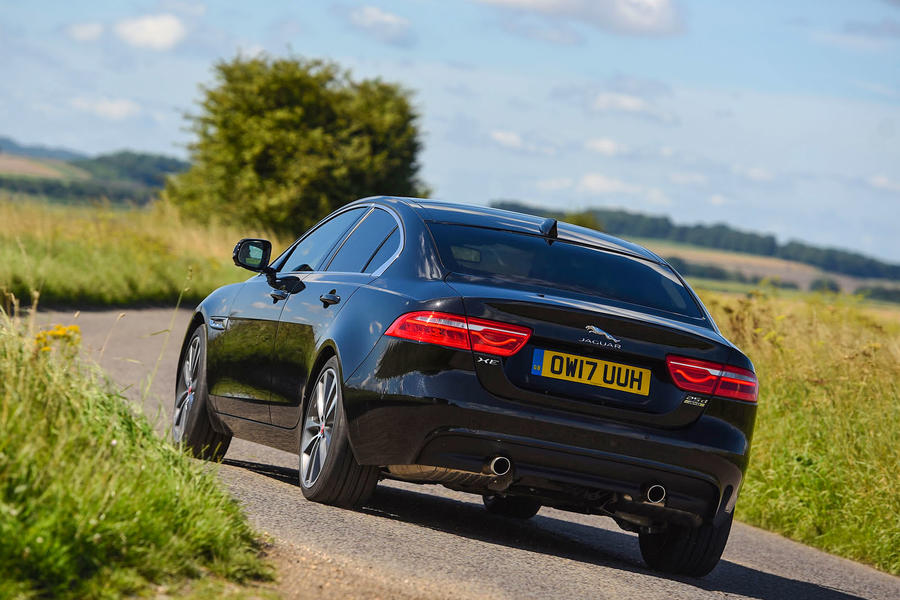 Even with the AWD system and a new engine, on the whole this Jaguar XE retains the familiar feel of the car, which is a very good thing. It’s effortless, pleasing and rewarding to drive; the class-leading dynamics of the car continue to shine through.

On our test drive, held in largely dry conditions, it was hard to feel the influence of the AWD system that often, but then it was rarely needed.

The twin turbocharged diesel has been designed by JLR to offer high power and torque, the two turbos working in sequence to smooth out the acceleration.

That said, at slow speed, the engine feels a little hesitant and languid. But when the power does arrive, it’s generally smooth, untroubled and refined. The eight-speed automatic gearbox complements it well and is generally as smooth as the powertrain.

Once you reach an A-road or a motorway, the Ingenium engine comes into its own. It cruises happily at speed and rarely feels strained. If you really ask for it, there’s a decent kick of power, although it’s not the sort of engine that ever thrusts us firmly further back into the comfortable embrace of our Portfolio trim test car’s brogue leather seats.

Instead, the engine matches the XE’s handling dynamics: it’s pleasing; relaxing, even. The engine is also perfectly suited for cruising on long journeys. It’s capable of effortlessly eating up mileage while remaining engaging enough to always offer an enjoyable drive – and capable of delivering a more engaging one if you seek it out. With an official combined mpg of 54.4, this is also a car that remains a relatively economical choice for regular long journey usage.

That refined, comfortable feel was evident in our test car’s Portfolio trim, which comes with the latest version of Jaguar’s InControl infotainment system, digital dashboard and head-up display, along with a range of driver aids and safety systems. If the interior isn’t necessarily class-leading, it’s certainly up there in the mix. 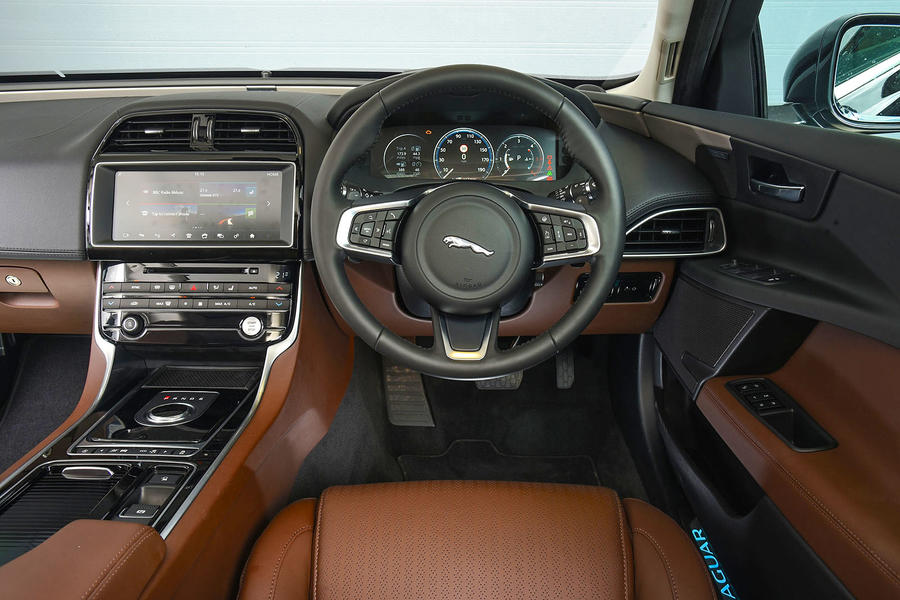 The extra power and performance of the new engine ensures the XE remains a compelling choice for anyone seeking an AWD saloon or an economical and rewarding long-distance diesel cruiser. It’s competitively priced and blends comfort with performance. 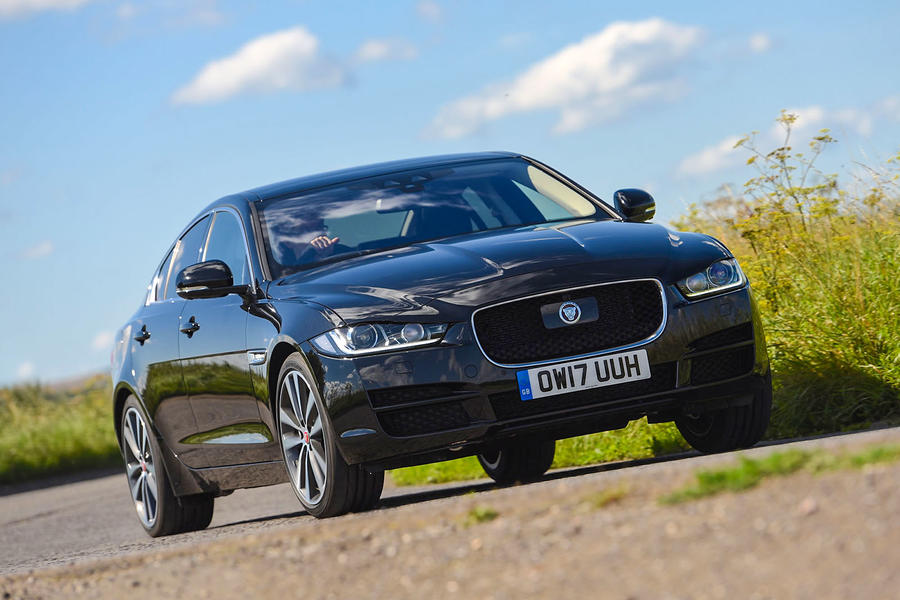 What is the point of this?

What is the point of this? Diesel is done, yesterdays fuel. This car is in company car territory so why would anyone take this over a 330e with it's 249 BHP and (this year) 9% BIK? Even private buyers would hesitate at buying a diesel now. I really want to like the XE but it misses the mark every time.

if diesel is done so is petrol

Considering that diesel is a bye product of petrol just less refined you do not get one without the other, at least that is what I am told from a colleague in the petroleum business.The thing with diesel is ignoranceand lack of education,co2 way less than petrol, nox with euro six nearly the same but to get to this staage you need add blu etc and is uneconomic for under 2 litre cars hence the rush to low cc petrol as is cheaper to manufacture.On this site a few weeks agoit stated that these very high compression petrol engines may in fact be far worse than diesel so goodness knows if in x months or years the _hit will hit the fan on petrol again,then we will here the ev's future talk about polutuin to get the cobalt and lithium for all those batteries, I suppose we will have to invade DRcongo to get the cobolt.There is not the material available to economicaly supply 30 million or more ev battery packs each year untill some one can reconstruct a battery with cheaper  non polluting materials.

Considering that diesel is a bye product of petrol just less refined you do not get one without the other, at least that is what I am told from a colleague in the petroleum business........

....On this site a few weeks agoit stated that these very high compression petrol engines may in fact be far worse than diesel so goodness knows if in x months or years the _hit will hit the fan on petrol again,....

, I suppose we will have to invade DRcongo to get the cobolt....

Can't have petrol without diesel, really, you wouldn't throw it you'd use in trucks and control burn it in power stations. Makes you wonder how Asia and America get by with hardly any diesel cars

Suggest you come up with some facts about high compression petrol engines first before throwing mud and repeating rumours.

Invade DR Congo, like we are doing next week to South Afica to get platinum for Cat Convertors?

In fairness to Jaguar , BMW have been building a variation of the 3 series since the 1960s , if it's not good after 50 years then I would say that's a problem...this is actually Jaguars first attempt at a small saloon with a mainly rwd range , so to come so close on first attempt at toppling the Germans is pretty good going . I find it odd and sad the self loathing some people have for British built products even when they are pretty good .
Ski Kid 12 August 2017

nothing speciasl about the BMW engines and audi interior either

To be honestmy friends and  I have had most  of the major premium brand cars and I do not think that the 3 series is any more refined than an ingenemium the 3 seies two litre I thyink ir rougher certainly on idle and the interior is quite plain and A4 along with other Audis must be based on  vauhhall Cresta from the 70's hardly sets your heart on fire.Agree that the XE ,XF and F pace could do with some design improvement.although is ok.