8
Yes, this is entirely new, not from the 1950s – and no, it definitely isn’t a Jaguar C-Type
Open gallery
Close

Sorry to start on a downer, but George Orwell’s gloomy admonition in Nineteen Eighty-Four that “who controls the past controls the future” has gained an unlikely relevance when it comes to famous cars.

That’s why the Ecurie Ecosse LM-C definitely isn’t a Jaguar C-Type, even though it looks like one. Jaguar has confirmed that it will be building 16 C-Type Continuations, each a near-perfect copy of the sports racer that won the 1953 Le Mans 24 Hours. While the LM-C, built by a company that takes its name from a famous old privateer racing outfit, is without official sanction or any hint of Jaguar branding.

Given that Jaguar successfully sued the maker of another C-Type replica on copyright grounds, the careful legal distinction being made here is doubtless a prudent one.

But it also reflects a deeper truth – one that I struggle to spot even after carefully comparing the LM-C with pictures of genuine C-Types. This car is substantially bigger.

According to Ecurie Ecosse’s Chris Randall, the LM-C is 100mm longer and 50mm wider than a true factory car, but the proportions are so spot on that the change is almost invisible.

The difference is down to a fundamental switch in purpose: unlike the C-Type, the LM-C was designed for road use, rather than purely motorsport, so the changes free up considerably more space in what would otherwise be an uncomfortably tight-fitting cabin.

Not that the real-world mission feels particularly likely on the day of my test drive. In contrast to the stirring Scottish background of the images you see here, I experience the car in rural Oxfordshire in wet, wintry conditions. Beyond a silly-looking borrowed flying helmet and goggles, weather protection comes from nothing more than the LM-C’s cut-down Perspex screen and a much smaller pop-up glass wind deflector. 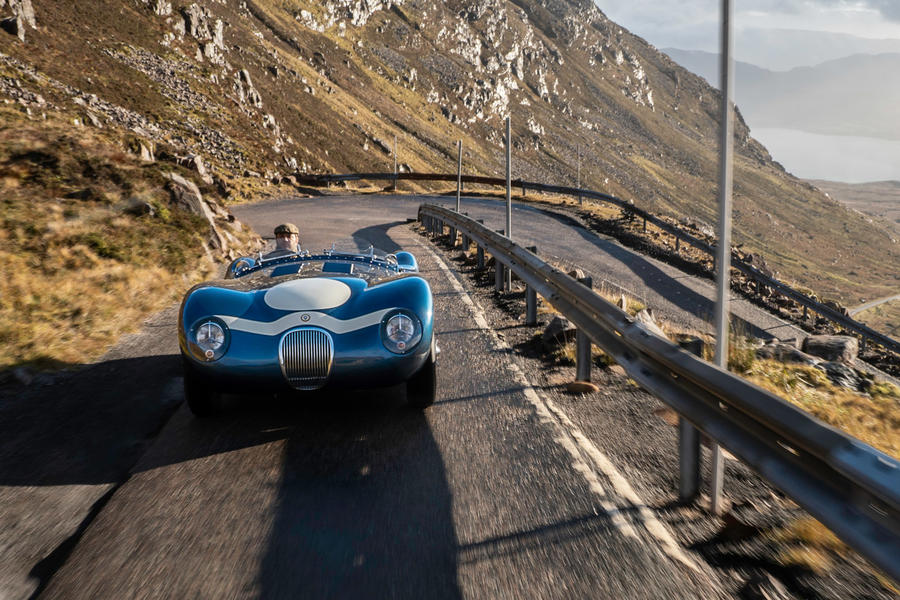 Under the skin, there’s plenty of differentiation. Like the C-Type, the LM-C has hand-formed aluminium panels over a chassis fabricated from steel tubing, but it benefits from non-prototypical strengthening plates and different suspension mounting points.

The engine is a Jaguar XK straight six, naturally, although with capacity increased to 4.2 litres and all of the fuel-injection and emissions control gear necessary to pass the IVA test added (see above right). It makes an entirely respectable 300bhp, which is delivered to the rear axle through a five-speed Tremec gearbox similar to the one found in late-era TVRs.

At just 1000kg, the LM-C has a potent power-to-weight ratio – especially given the 185-profile Avon Turbospeeds charged with powering, steering and stopping it on the cold, soggy asphalt that fate has dealt me. Ecurie Ecosse hasn’t added any modern electronic safeguards.

This is a car with a low tolerance for inexperience. The engine’s lumpy idle is sometimes harmonising, sometimes seeming to slow down to countable beats; and the sharpness of the accelerator response and the abrupt clutch take some getting used to while passing through Henley’s one-way system.

Yet my trepidation doesn’t continue much beyond the first derestriction sign. Scrabbling traction indicates the rears have only a limited capacity to produce longitudinal grip and corners confirm that lateral loadings aren’t going to be much higher.

But the LM-C flags its limits as clearly as pretty much anything I’ve driven, and the unassisted slack-free steering delivers both proportional front-end response and what feels like unambiguous feedback, even though much of this is about growing slip angles.

Reassuringly, the back end grips harder than I expected, following the front faithfully unless deliberately provoked. The accelerator pedal’s sensitivity makes this easy to do, too – but the joy of driving is definitely in managing the relationship between the axles while trying to get the best out of both at fairly modest speeds.

Even though the cockpit is larger than the C-Type’s, it’s still a snug fit. The materials are far plusher, with a leather dashboard facing where the C-Type has painted metal, a pair of period-appropriate Tag Heuer stopwatches mounted to it.

The switchgear is clearly more modern than the 1950s inspiration but is mounted unobtrusively in an offset panel on the right-hand side. A wood-rimmed steering wheel sits between a tachometer and a speedometer, with the needle of the former sweeping anti-clockwise, as in the C-Type.

The rest of the driving experience is similarly no-nonsense. The manual gearshift has a solid action and nice weight, and although the all-disc brakes require hefty pressure to wake up, they bite hard and effectively once they do – much more than my experience of actual 1950s classics had led me to expect.

The engine sounds great all of the time, even through the padding of my Biggles outfit, but it soon becomes clear that there’s little point making anything other than occasional trips to the 5800rpm redline, as the car is happiest when riding the upper reaches of its mid-range.

Sitting low, the aero screen is surprisingly effective at deflecting rain and spray when you’re travelling at reasonable speed, but slowing down means getting wet.

While it seems unlikely that any buyer will regularly use this car for winter work, it copes impressively well with the unlikely challenge. It’s one of those cars that makes any journey feel like an adventure, although, given free choice, I would definitely opt for warmer and drier conditions. 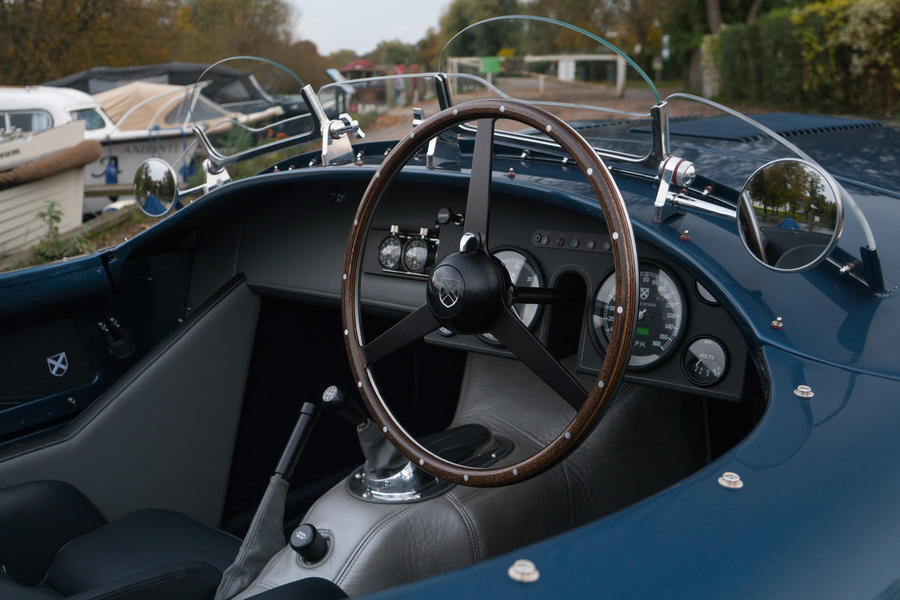 The usability is the key difference from the C-Type Continuation, the Jaguar being intended for historic competition rather than road registration. The LM-C’s design clearly comes from the same starting point, but its ability to wear numberplates is the key difference. It’s not a true original, but it is a hugely entertaining car.

Ecurie Ecosse will produce only a very limited run of the LM-C (beyond that, it’s planning more cars inspired by the outfit that it’s named after), and while £516,000 is a substantial price tag, it represents a significant saving from the undisclosed seven- figure sum required for the C-Type continuation. Arguably further proof that the next part of Orwell’s famous line was right: “Who controls the present controls the past.” 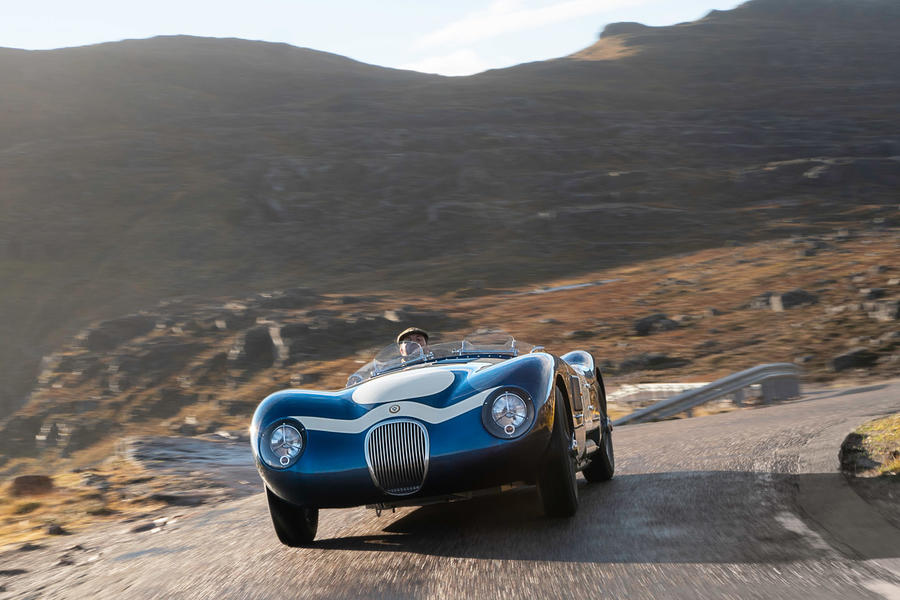 Terribly expensive for a suicidal car