9
Fastest F-Pace feels rather more than the sum of its parts. If this is how Jaguar’s internally combusted SUVs go out, it’s on a massive high
Open gallery
Close

Crikey this is good. Call it home advantage if you like, picking up a Jaguar F- Pace SVR in Warwickshire within sight of the garages it was engineered in, and heading out into the Cotswolds on roads on which its dynamics were developed and signed-off. But I think it would play away pretty well, too. They’ve got it right.

Apparently the F-Pace SVR hasn’t really stopped being developed since Jaguar first put a 5.0-litre supercharged V8 in its big SUV in 2014. It went on sale as the SVR in 2019, well after the regular model, but was due for this update at the same time as the rest of the range. The changes are detailed but plentiful. The new bonnet, now without an uncomfortable shut-line across it, improves aero and allows bigger grilles, with more cooling for both the drivetrain and brakes (the same 395mm discs but with different pads).

The V8 is the same but adoption of the torque converter from the Project 8 means it’s now allowed to make its full 516lb ft in all gears. That, plus a reduction in aerodynamic drag, drops the 0-60mph time from 4.1sec to 3.8sec. I doubt you’d notice but three looks better, no?

What you should notice are suspension changes, to make the SVR more mature and rounded, without losing its dynamism, or while improving it, even. The adaptive dampers, roll bars and spring rates are unchanged but 70% of bushes are new, as are rear toe-links, front control arm links, rear spring aids and more. Stuff that people don’t pay attention to but would notice.

To recap, the F-Pace sits on Jaguar’s largely aluminium modular platform with a rear-drive bent. In the Comfort drive mode this 4wd car, with a centre differential and electronically-controlled limited slip diff at the rear, defaults to 70% rear-drive; put it in Dynamic and that heads to 90%. It’s variable too, but even in Snow/Ice mode it’s default 50% front:rear, and no more than 50% ever goes to the front wheels regardless of how slippy it is. 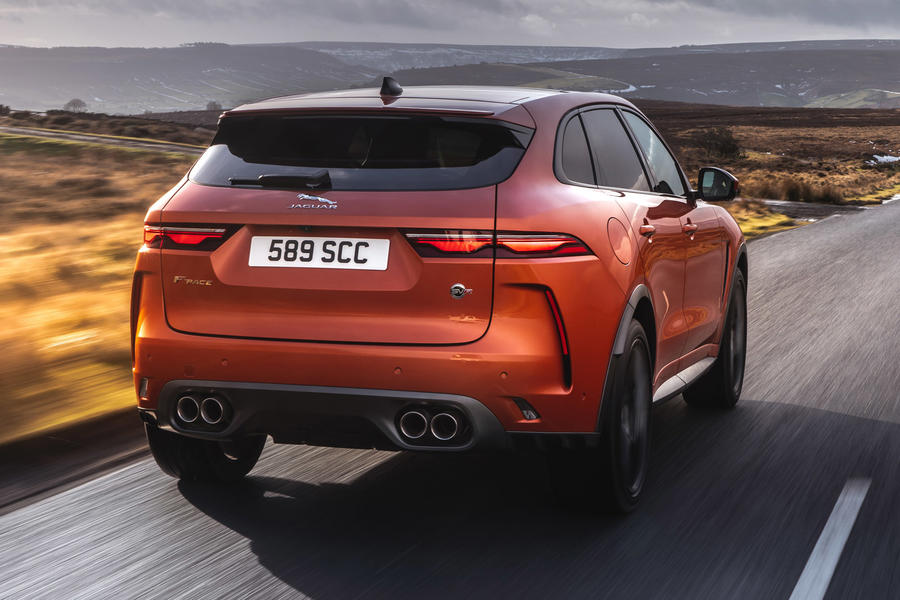 From a user’s perspective perhaps the most notable change to the F-Pace is that all of these functions, plus the rest of the comms and information, is controlled by a new infotainment system.

The electronics architecture has been brought across from Jaguar’s electric vehicle platform and, as in the latest Land Rover Defender, it has transformed the speed, functionality and usability to the point where the infotainment is as good as anyone’s. (Although that’s not strictly one-way; the mass adoption of touchscreens means some makers’ functionality has come towards Jaguar’s, too).

I also like this car’s level of tech: big round dials remain dials; there are two selectable stages for steering, suspension, gearbox and engine, no more. It doesn’t overload you with options and info. Call me an old codger if you will, but if I’m driving, there are only so many functions I can take.

And it drives really terrifically, with the caveat that this is a 2.1-tonne SUV, and obviously that brings a number of limitations with it. But name any rival: Alfa Stelvio, Mercedes-AMG GLC63 or Porsche Macan Turbo and the F-Pace steers, rides and handles with the best abilities of any of ‘em.

Flicking from Comfort to Dynamic drive modes is one quick of a switch on a not-overloaded console and you’d happily use both on a varied drive in the UK. They’ve clearly been selected by engineers, not marketeers.

I don’t like tend to feel comfortable with ‘driver’s’ SUVs, figuring that a 4x4 is happier being a 4x4 and a sports car more contented as a sports car. But I get why people want both and they really shouldn’t overlook the Jaguar. If its all- weather capability was enough for me, I’d take one over all others, or a Range Rover Sport, or an Aston Martin DBX. 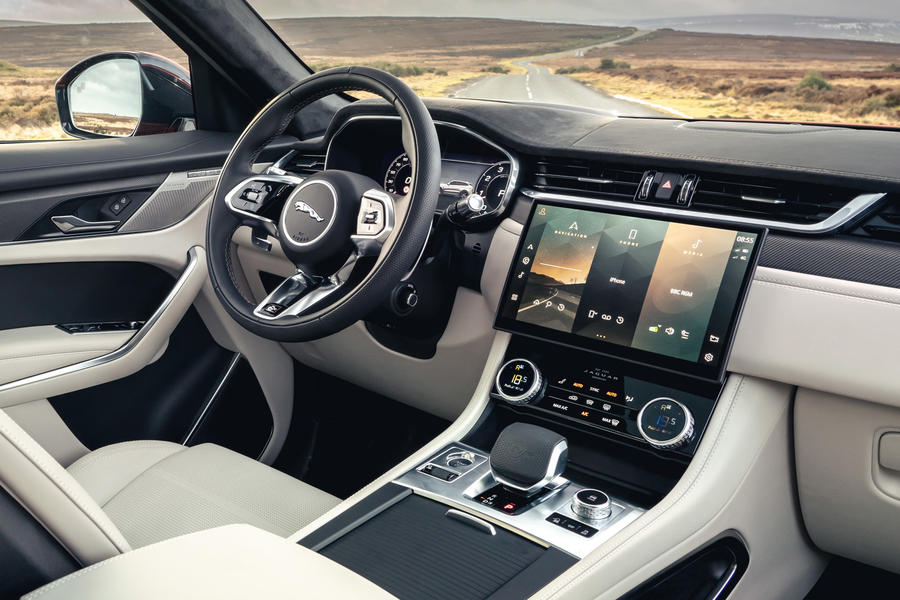 Does it feel very 2021, though? A Jaguar with a 542bhp supercharged V8 launched two weeks after Jaguar announced its future was all-electric?

I guess not, but as hobbyists one day we’ll remember the slight ridiculousness of yesterday’s things, and fondly recall the gems. I think this’ll be one of them. 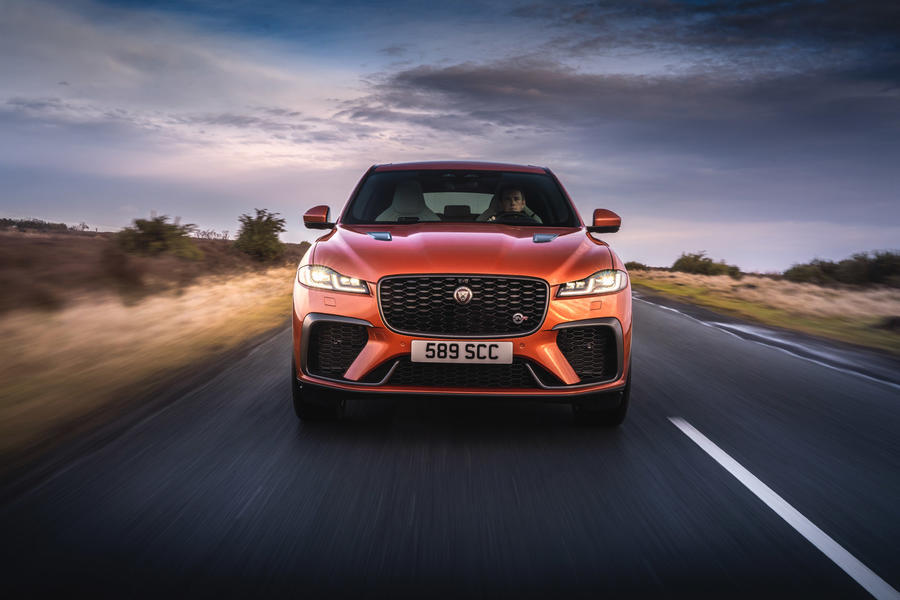 Awesome car. My absolute dream at the moment is the new Defender 90 V8 but £100k ? It's March the 1st, not April, so this now eclipses it and is - relatively - good value.

I do worry about Jaguar in the next four years, how will they continue to sell XE's and XF's with the sword of Damoclese over their heads, probably E-Pace too ? I think the F-Pace will sell - but not enough - because at least the average buying customer can SEE it's a comprehensively new model. The switch to a new platform or one 'bought in' is very weird when they've spent £100's of millions on the new RR XJ architecture, so sadly sounds to me like they're separating the brands right down to the design and production level - another famous brand likely to be flogged off to China.

One question - what on EARTH are SVO doing to justify their existence ? The operation in facilities and salaries alone must be costing £5-10m a year and all they've launched recently is the Velar SVA - now off the price lists - and this new F-Pace, which is only tweaking the previous SVR in line with the factory facelift... I think they need to get some new product out there. The SVO version of the F Type has gone and the new Defender V8 isn't SVO.

I always thought the SVR, SVAutobiography - marketing department gone mad, and one SV too many - and SVX was good in theory but they have just diluted - and confused - the message. Learn from M, RS, AMG...

RightSaidFred 1 March 2021
Jag at its best - max out every attribute. Joyous automotive hedonism. Shame so few people get to experience it, the brand would be much stronger if they could.
Bimfan 1 March 2021

This is what Jaguar do really well. Concept cars and bells and whistles performance cars for the press to fawn over, but for the mass buying public don't really make any sense.

As usual, it is 5 years too late, too thirsty (I know from experience this engine averages 13mpg round town) and too expensive to sell in anything but tiny numbers to oil rich states and oligarchs.