This is the all-new Hyundai i20, which is now in its third generation following the launch of the original in 2008. Previous models have played the value-for-money card, eschewing the style or fun of rivals in favour of eye-catching prices and a five-year warranty. Yet with this latest version, the Korean brand is being a little more ambitious.

For starters, it’s the first recipient of the firm’s bold new ‘Sensuous Sportiness’ (yes, that really is a thing) design language, which aims to inject desirability and glamour and continue Hyundai’s relentless push upmarket from its more bargain basement roots.

Sharp visuals aren’t the only elements of this ambitious attack on the extremely crowded sector of the market, because the i20 also promises a more roomy and upmarket interior that leads the way for technology and connectivity, plus there’s a huge list of driver safety aids and the now obligatory mild-hybrid engines, in this instance packing a big-car 48V supply plus Hyundai’s Intelligent Manual Transmission with its electronically controlled clutch.

The range has been rationalised (there’s now SE Connect, Premium and Ultimate, with a sporty N Line to follow), while prices have been hiked, but there’s more kit and those 48V hybrid bits are claimed to boost fuel efficiency by up to 4%. 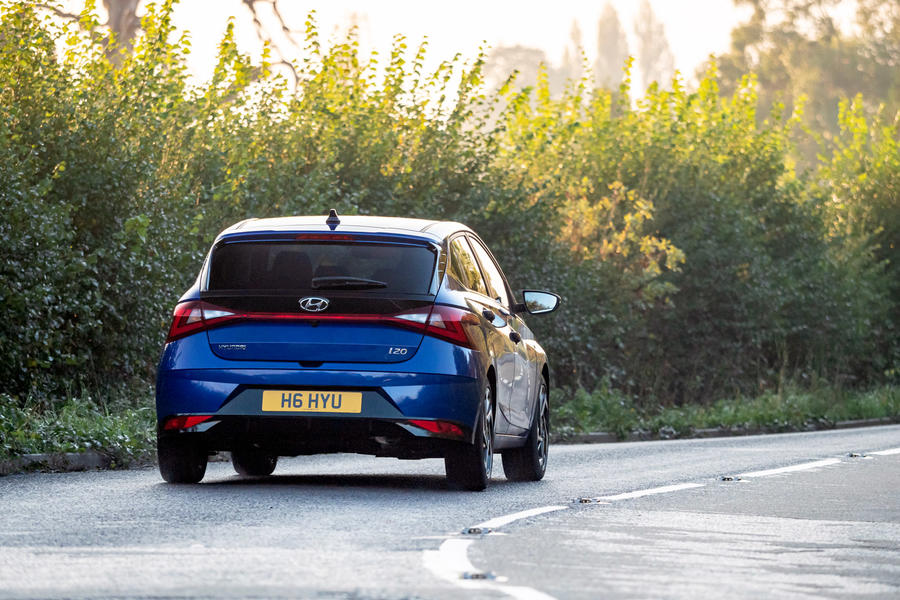 Style is obviously subjective, but in the near-range-topping Premium guise tested here, the i20 certainly stands out. There are sharp creases, bold lines and a two-tone roof treatment, plus LED signature daylight-running lights front and back - although the full-width rear lamp treatment already looks dated to these eyes.

This third-generation car is 30mm wider than before and has a wheelbase that’s been stretched by 10mm, which means there’s more space inside. Even taller adults won’t feel short-changed when riding in the rear, despite the roofline being 24mm lower than before.

The cabin looks the part too, with a curvaceous-design, easy-to-use 10.25in infotainment screen that’s backed by online services with a five-year subscription as standard. A full TFT instrument cluster is standard across the range, although the graphics have a very Mercedes look about them, particularly in Sport mode when the dials get a chequered backing that’s pure AMG. Speaking of similarities, the new four-spoke steering wheel wouldn’t look out of place in an Audi.

Oh, and of course there’s more kit than you can shake a large executive saloon at - there’s not much that isn’t standard on this Premium version. Less impressive is the quality of the plastics used throughout, which are either hard and scratchy or hard and shiny. There’s not a soft-touch piece of trim in sight. Not very premium.

Starting the i20 is a bit of a faff as you’ll need both the clutch and brake depressed plus the gearlever in neutral before the 99bhp turbocharged 1.0-litre three-cylinder will fire into life, but once you’re moving, it’s a likeable unit. The electrical assist gives a useful slug of torque at low revs, helping the Hyundai feel surprisingly brisk despite rangy, emissions-friendly intermediate gearing (second runs to 70mph). There’s a characteristically thrummy soundtrack, but the engine revs smoothly and keenly, although it does its best work in the mid-ranges where a useful 127lb ft of twist action is available from just 1500rpm.

A pleasant surprise is that high-tech six-speed gearbox. The shift action is a little notchy, but the drive-by-wire electronically controlled clutch feels natural to use and works well, with the added benefit that it can disconnect the driveline automatically for efficiency-boosting coasting on the motorway - either with the engine at idle or switched off completely.

Yet this feeling of sophistication is undermined by the i20’s firm and brittle ride. At urban speeds the suspension is stiff-legged, thunking and crashing over sharper imperfections, while mid-corner bumps cause it to shake and shimmy. Some of these symptoms could be exacerbated by the Premium’s larger 17in alloys, but not all of them. Bigger, more smoothly surfaced undulations are dealt with more adeptly, but it’s a world away from the plushly damped Fiesta.

It’s a shame, because there’s a decent chassis lurking somewhere underneath the Hyundai. The steering hasn’t got a lot to say, but it's quick and precise enough to allow easy placement of the car, while grip is strong and the i20 takes on a nicely four-square stance when pushing on. Carry too much speed into a corner and the Hyundai will start to wash wide, but lifting the throttle causes the car to tuck in quickly and obediently. There’s certainly some agility here and the raw material on display offers a glimmer of hope that the heavily breathed on N hot hatch could be a cracker. 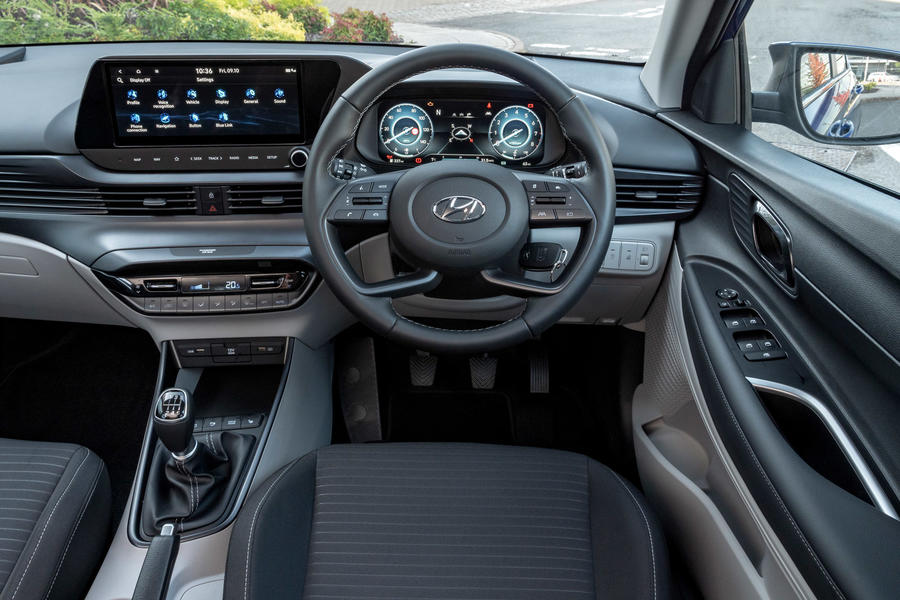 You’ll need to look elsewhere for driving fun and a composed ride, but the latest i20 is eye-catching, roomy and well-equipped supermini.

Prices have been hiked for the new car, starting at £18,595 and rising to £23,345, but in return you get more space and standard kit, while Hyundai are also promising VW-bashing residuals. Factor in the firm’s famed five-year warranty and there’s lots here to appeal to the head, if not the heart. 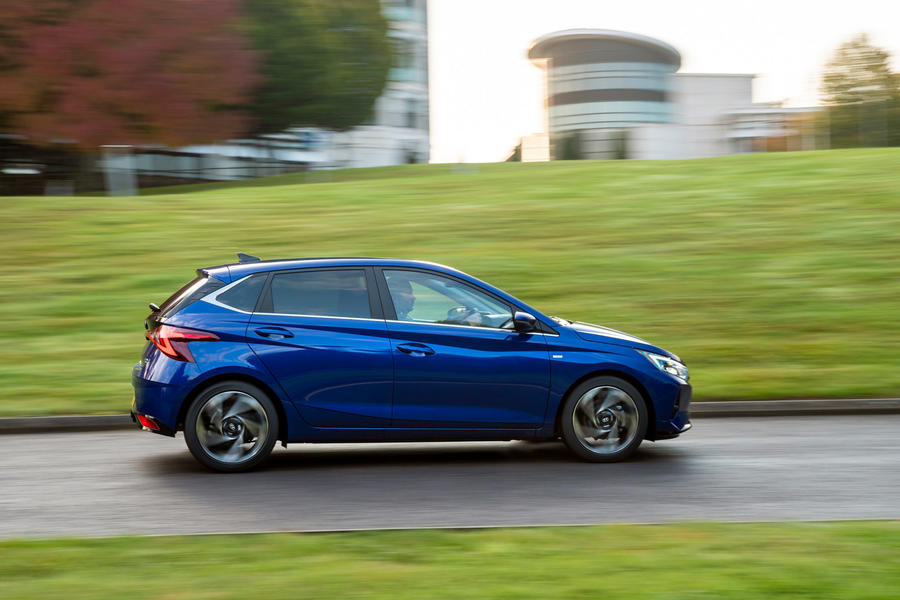 And Autocar don't seem to think that detracts from its "premium" status..

I like it, disappointing regarding the crashy ride but otherwise it seems a cracking little very highly specced car.
The distaste for the lack of soft touch plastics always annoys though, saying that the quality is lacking and not very premium, when the traditional German premium brands often also have hard plastics and soft plastics do not mean high quality.
In the past the German brands have always been described as the benchmark for interior quality whereas Japanese cars have always been criticised for hard plastics, yet it's the Japanese cars interiors that tend to wear better and prove rattle free for longer in my experience. So I personally wouldn't be put off by the lack of soft touch plastics in this.
Deputy 21 October 2020

Too often perceived luxury is confused with quality.

Good competition for the Skoda Fabia....

@ A34 It is true, if you look at entry price point. Not much car touch the Fabia on that. However, I wonder what a spec for spec price comparison would look like.  I would imagine that it would be much closer, but probably still in the older car's favour