From £18,4758
Share review
Saloon bodystyle gives the Civic a more upmarket feel, without compromising its moderately engaging drive. Is that enough to make it more than a niche proposition?
Share
Open gallery
Close

After three years without a single saloon in its UK line-up, Honda has bolstered the Civic range with a new four-door bodystyle.

Customers see the Civic as synonymous with the brand, Honda says, and a saloon should help broaden its appeal. It also has to tempt Accord customers, who have been without a direct replacement since that model went off sale in 2015.

The elongated, coupé-like styling is certainly more restrained than the polarising hatchback, with a more discreet rear bumper and a roofline that slopes smoothly into the C-pillars. Overall length has grown 125mm to 4644mm, with the extra dimensions increasing boot space to 519 litres, versus 478 litres in the five-door.

The launch line-up is limited to two engines: a 127bhp, 1.0-litre i-VTEC three-cylinder turbo petrol in six-speed manual or CVT automatic guises, and the 118bhp, 1.6-litre i-DTEC diesel, tested here with manual transmission but also available with a nine-speed automatic - a first for any diesel Civic. For the time being, the more potent 1.5-litre petrol is staying exclusive to the hatchback.

The diesel is expected to outsell the petrol 3:2, with an even split between manual and automatic transmissions. And even then, Honda expects the hatchback to continue to make up the majority of Civic sales. 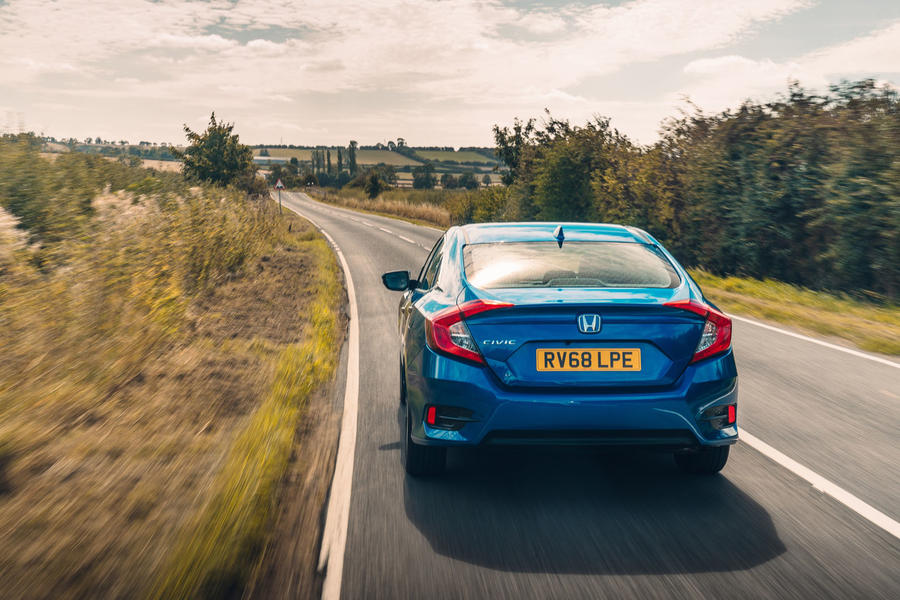 Front and rear passengers will find little difference between this car and the regular Civic, with plenty of leg room and the same low-slung driving position.

As big as the newly separated boot may be, though, actually using the space is made trickier by the smaller opening. It may be wide, but the boot opening isn’t as tall as the hatchback, and it can be harder to store bulkier items.

The mid-spec SR trim of our test car includes a 7.0in touchscreen infotainment system as standard but, compared with rivals, the Garmin-supplied navigation graphics feel outdated and cumbersome. Thankfully, both Android Auto and Apple CarPlay are available for an improved sat-nav experience using your smartphone.

Overall interior quality still isn’t quite up to the same standard as Volkswagen or Mazda, but the soft-touch plastics and sensibly laid-out dashboard continue to make a good impression here. The digital instrument cluster is particularly slick compared with similarly priced rivals'.

On the road, the four-door Civic is just as engaging as the hatchback, with direct and nicely weighted steering, and a chassis that’s responsive to your inputs. The saloon uses a version of the dual-pinion power-assisted steering found on the Civic Type R, specifically tuned for the four-door model with a focus on secure handling.

There’s no disguising the car’s size but, whereas saloon-like handling was a detriment to the hatchback, it makes more sense here. Grip is sufficient enough to carry plenty of speed through corners, and the whole car feels reassuringly planted on the road.

The firm suspension doesn’t lean too far towards sporty, managing to soak most bumps without ever becoming crashy or transferring shocks to the passenger compartment.

There’s plenty of pull from the 1.6-litre engine, although it lacks the same burst of torque you’d get from some of its rivals. The six-speed manual gearbox may provide a satisfyingly precise shift, but the engine isn’t particularly rewarding when pushed.

It begins to sound harsh early, with little extra shove to show for it at higher RPMs. Things become more refined at cruising speeds - even if road noise still makes its way into the cabin. 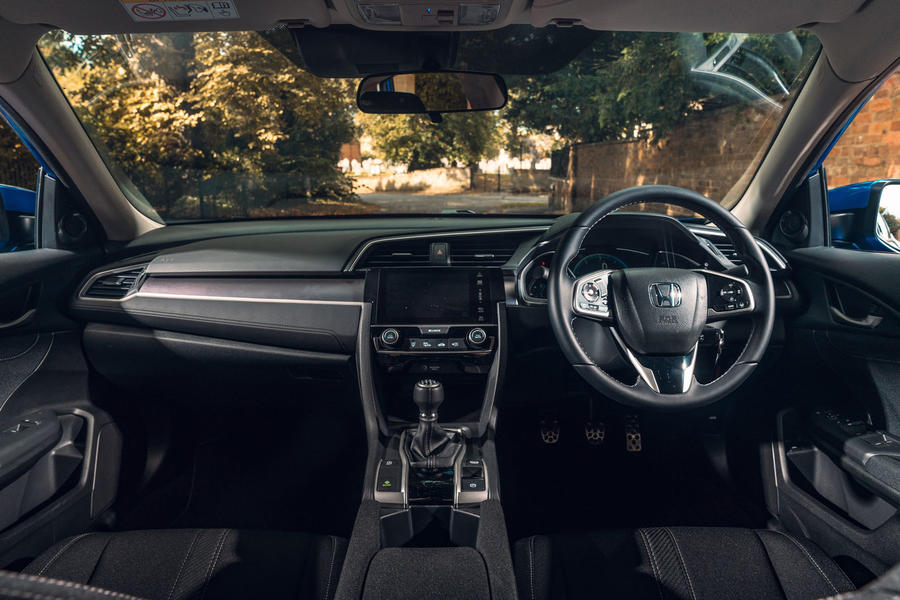 The saloon may have all of the regular Civic’s strengths, but also has less mainstream appeal - at least here in the UK, where hatchbacks are still the bigger seller.

Improvements in luggage space and interior leg room are only minor, with practicality taking a small hit in the process. Starting prices are some £500 higher than the five-door, which was already more expensive than its main rivals.

Still, with an equally engaging drive and slightly more grown-up looks, the four-door isn’t without its charms, and this diesel variant can achieve excellent real-world economy.

It takes what was already one of our favourite hatchbacks and merely tweaks the formula. As such, if you’ve already decided on a Civic, which to opt for will largely depend on which you prefer the look of. 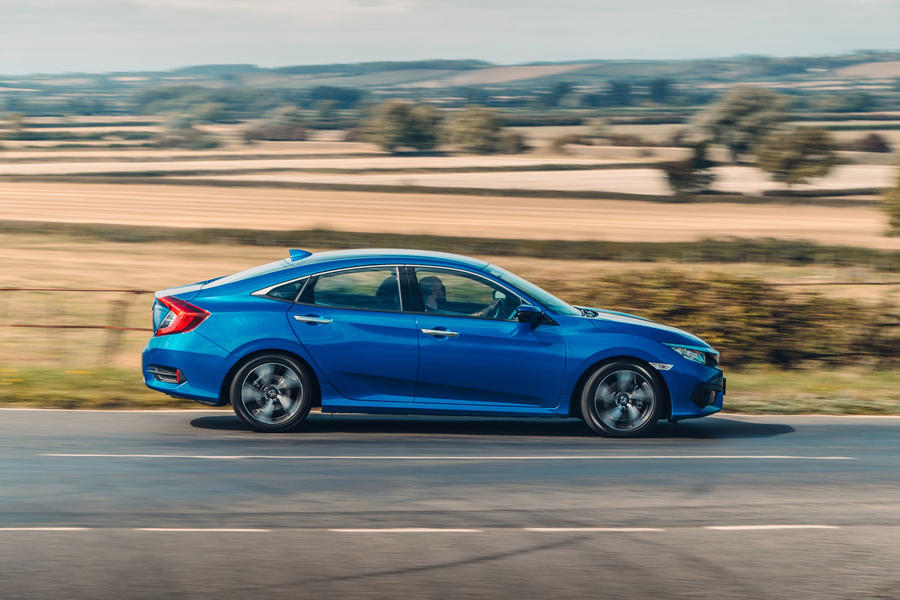 "Went off sale" ???? Do you mean was discontinued? Does Autocar no longer require it's journalists to speak English?

Its a whole 11mm longer than the current 3 series

The Wheelbase, and maybe some of the naff colours the non metallic Grey is just plain aweful, I’ve seen Mini’s in this color too, maybe it’s that?

The Wheelbase, and maybe some of the naff colours the non metallic Grey is just plain aweful, I’ve seen Mini’s in this color too, maybe it’s that?

Agreed, that grey just looks like the painted it in primer, and forgot the top coat

So big is this car, that I cannot see how it can be a continuation of the Civic line. It's growth rate is far beyond that of the Golf.

The civic 5door hatch and saloon that was also the Rover 400/45  was also a fair bit bigger than the golf of its time, civics have often been slightly out of the norm size wise.

So big is this car, that I cannot see how it can be a continuation of the Civic line. It's growth rate is far beyond that of the Golf.

It is ugly and the interior is far to sombre

I have grown to quite like the looks of the current Civic as i see more out and about, and the tamed down bumpers of the saloon are an improvement here. A further plus is no ugly kid glass, but why not let us have the 1.5 with a little get up and go?