From £22,2446
Share review
Ford transforms the Ranger into a plush £40k rival to the new breed of more road-focused pick-ups – but it can't hide its roots
Share
Open gallery
Close

While most new pick-ups want to give an illusion of being a true alternative to a big SUV, the Ford Ranger is unashamedly a pick-up truck. Ford’s marketeers will probably still try to convince you otherwise, but the Ranger is as rough and tough as pick-ups come.

Since this generation of Ranger arrived in 2012, it’s had a series of updates, culminating in this latest, plushest Wildtrak X range-topper, designed to take the fight to the likes of the Mercedes-Benz X-Class and Volkswagen Amarok – each a truck too, of course, but aimed at the more ‘lifestyle’ minded buyers who are migrating to pick-ups in larger numbers.

Ford will be hoping to woo 1000 of them with this Wildtrak X limited to that number, the special edition getting a few visual styling tweaks, an exclusive blue paint colour with lots of black trim to go with it, a locking cover for the tray, 18in alloy wheels and extra convenience and safety kit. 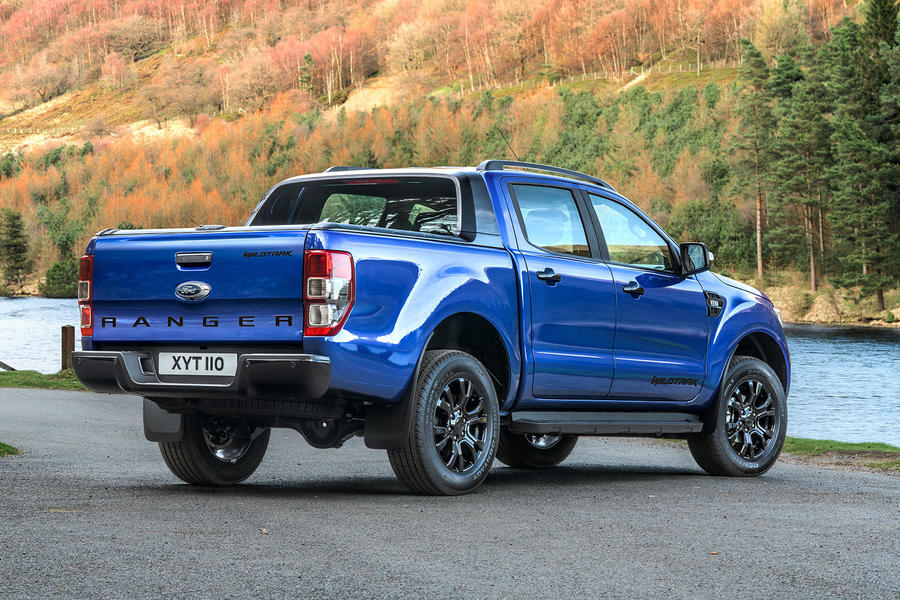 While rivals can carry off an impression of a car quite well, the Ranger can’t. It’s a dyed-in-the-wool truck, no matter how many toys are in the cabin, or how pleasing it is to the eye with its nice new paint, trim and addenda.

While we commend Ford for the honest approach of the Ranger and its effectiveness at what it was set out to do, it can also be used as a stick to beat this Wildtrak X version with. Ford quotes £38,574 for it, rising to £40,350 for our test car with a smattering of options.

That’s a lot of money for something that really doesn’t wear such a price tag comfortably, sitting alongside V6 versions of the X-Class and Amarok, which are more car-like in their cabins and on-road performance.

Toyota’s top-spec and even-better-appointed Hilux is rougher and tougher still, beating all comers in our pick-up off-road test earlier in the year. You’ll also get as much as £10,000 change from even the top-spec Nissan Navara or Mitsubishi L200, models the Ranger would find more comfortable company in usually.

So as a £40,000 vehicle the Ranger must be judged. There are no dynamic changes in its evolution into a Wildtrak X, so whereas when it was first launched in 2012 it was the standout on-road performer in the segment, rivals do now ride and handle more car-like than ever and have surpassed the Ranger.

When you’re carrying no load, the low-speed ride is as crude as you’d expect from something with such a chassis. Its best, most comfortable work is done at about 60mph on faster, smoother roads – here it settles nicely, and the high driving position and commanding view of the road make the Ranger a surprisingly relaxing companion.

It still handles better than you’d expect, with body roll well controlled and the steering competent and at least feeling connected to the body, something that wasn’t true of pick-ups a decade ago. It’s not a car you’d ever want to push on with, but it’s no disgrace either.

Everything about the engine exudes workhorse, from the grumble at idle to the surge-like sound whenever you press the accelerator pedal. A V6-powered Amarok is considerably more refined. Yet the Ranger’s engine feels strong and rich in torque, and connected to a transmission with a very short first gear to help get those heavy loads moving. Up to speed, it’s flexible, and its power and torque reserves are easily accessed. While lacking refinement, the engine is entirely in keeping with the Ranger’s workhorse brief.

The Ranger itself is a big motor, too. An X-Class (and its Nissan Navara donor car) feels big, but the Ranger feels half a class bigger again. That’s reassuring if The Walking Dead suddenly came true, less so when squeezing through a width restrictor into Morrisons car park.

The Wildtrak X brings with it an interior that has much more in common with Ford’s passenger cars, albeit from a generation before. The material mix is a nice blend of comfort and quality where you interact with it, and robustness where it’s likely to take a kicking and get a bit mucky. 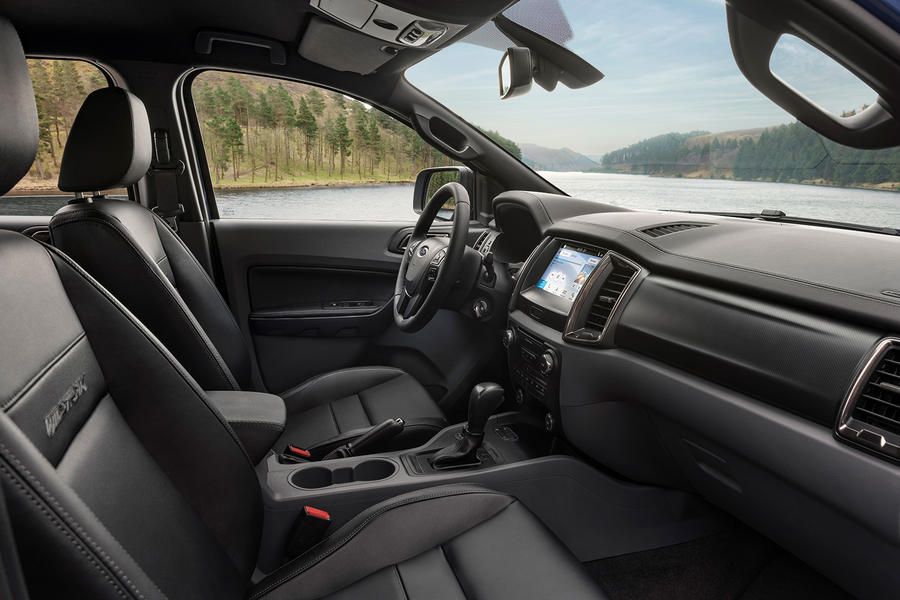 We like the Ranger – it’s honest, approachable and entirely fit for purpose. Yet while the Ranger was once one of the best of the breed on the road, the pick-up sector has since exploded with new and ever more credible rivals that have gone past it as a true big SUV alternative.

No matter how much window dressing Ford does to the car and how many toys it sticks on it to create versions like the Wildtrak X, its best work is done much lower down the range. So as a £20,000-£30,000 pick-up, the Ranger can give the plusher pick-ups a bloody nose – yet as a £40,000 model, it’s made to look rather exposed. 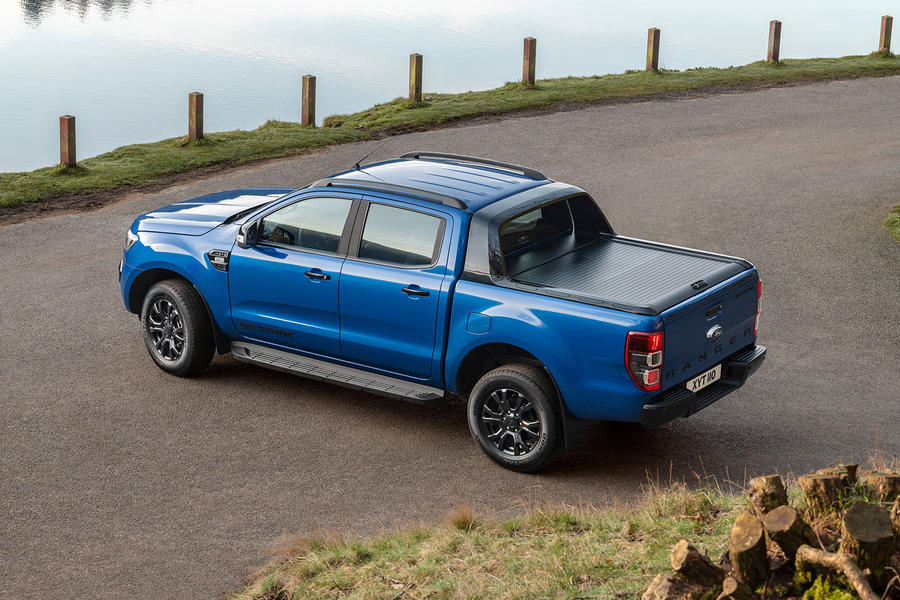 19 December 2018
I do like the double cab pick up class but if you want car like handling buy a car or a Luxury SUV eg Range Rover. A lot of these SUVs make me question the buyer why????? The boot is no bigger than a Golf estate (I'm thinking Tiguan class etc) for example. The ride height is only an inch higher if your lucky, they always get 2wd why???? The modern 4wd systems don't guzzle any more fuel. I just think it's similar to buying a Ferrari & saying I don't want the V8. I want a 1.0 60 bhp engine, it looks the part though.Rant over.

The 'Capri of trucks'

19 December 2018
So those deluded rip-off merchants at Ford are up to their old tricks, trying to flog us wide-eyed Brits a tarted-up mid-size truck for the price of a fully-loaded V8-powered F-150. It's the old Mustang/Crapi trick all over again. If the company is serious about selling us the dream, they should give us the real thing.

Hope it’s better than the previous Ranger series with the defective oil pump. Ford have stopped producing the original oil pick up priced at around twenty pound and now want to charge over £200 for the parts to rectify the problem which they knew full well was a design issue from the start. Hundreds of blown engines resulted but no recall and on a design less than five years old. Ford are a bunch of shysters and you trust them at your peril particularly where the Ford Ranger is concerned.

Pick ups aren't my thing at

Pick ups aren't my thing at all, but I get 'luxury', up-market ones such as the X-Class or Anorak even less. I would have thought that half the appeal of a truck would be to have something a bit rufty-tufty, less refined,maybe a bit harder and more involving to drive. Something like a more basic Hilux or L200 would appear to fit that bill better. But that's just me, I guess the buyers after these top end models are just interested in the look and the tax breaks.

40 grand for an old truck made in Thailand???

Another one of Ford's rip-off the British motorist stunts. This is made really cheaply in Thailand & sold at premium prices. (To compenate for the losses they make from selling cars made in high cost Germany)

Are bought by VAT qualifying businesses/self employed. That is the reason the convention of quoting prices '+VAT' should be kept. For the private new buyer these things are ridiculously expensive.

Second point is that the Ranger is over the unladen weight for a dual purpose vehicle to retain most national posted speed limits. On most non-motorway roads it is limited to 50mph max speed unless the posted limit is less. Speed camera van computer systems do take this into account, so be at least aware of this.

Thirdly, contrary to some misinformation here, this pickup does not come from Thailand. For the UK the T6 and newer variants have always been made at Ford's South Africa factory. Even the engines are made there.

Until very recently the 3.2 Wildtrak automatic  could be bought, after all available new car discounts, for £22,000 + VAT, at which price it makes commercial sense considering the other tax advantages of a commercial vehicle as opposed to a car for a business.