From £22,2448
A uniquely capable off-roader, albeit with minimal drama in the engine department
Open gallery
Close

It’s a Ford Raptor, but not the Ford Raptor - you know, the American big pick-up with the engine from the Ford GT.

This is the more Euro-friendly Ford Ranger Raptor, a compact truck rather than an F-150, with an engine from Dagenham. But it’s still a ‘Ford Performance’ vehicle, so it’s claimed.

It’s better sized for our roads than an F-150, for sure, although these things are still relative, what with double-cab pick-ups being large cars generally, and this one being larger than the standard Ranger.

At 5398mm long, then, this Baja-inspired truck is 44mm longer than the standard worksite wagon, 2028mm wide (up 168mm) and 1873mm high (up 52mm), all because it’s beefier off-road. And how. Its separate ladder chassis has been strengthened at the front around the shock towers, along the front rails, and completely redesigned at the back, where the old leaf springs have been ditched, and there are coil springs and a Watt’s linkage to help locate the live rear axle and stop it swaying. There are uprated springs all around, and Fox motorsport dampers. It has been tuned to be at its best, off road, at speed, without loads. A rough track sports car, if you like.

That means ground clearance is now 283mm, up 51mm or 30%, approach and departure angles are improved and there are 17in alloy wheels bearing BF Goodrich KO2 tyres. As such, the Raptor, sitting atop the Ranger range and available with a double-cab body only, costs £48,785 on the road including VAT – £10,000 more than the next most expensive Ranger. More on which in a moment.

Power comes from a twin-turbocharged four-cylinder 2.0 diesel rather than that more eager V6 petrol, slightly disappointingly, but such is life; move to the States if you want displacement. This is the first application of the twin turbo unit and it develops 210bhp and 367lb ft, which drives two or four wheels in high ratio, or four wheels in low ratio, through a 10-speed automatic gearbox with titanium flappy paddles, and is good enough to propel this 2510kg high-performance vehicle to 62mph in, er, 10.5sec, and onto 106mph. High performance in truck-speak is apparently not the same as high performance in the passenger car world.

But if it looks the part, that’s because, in the chassis department, it is. And as with a high-performance passenger car where, sometimes, chassis changes or big exhausts limit boot space or towing capacity, something has had to give here, too. The Ranger Raptor’s payload capacity and towing limit have both taken a dive, from over a tonne to 620kg, and from 3.5 tonnes to 2.5 tonnes respectively, which probably wouldn’t trouble too many owners, but does mean you can’t claim the VAT back in the UK because it’s no longer a commercial vehicle. 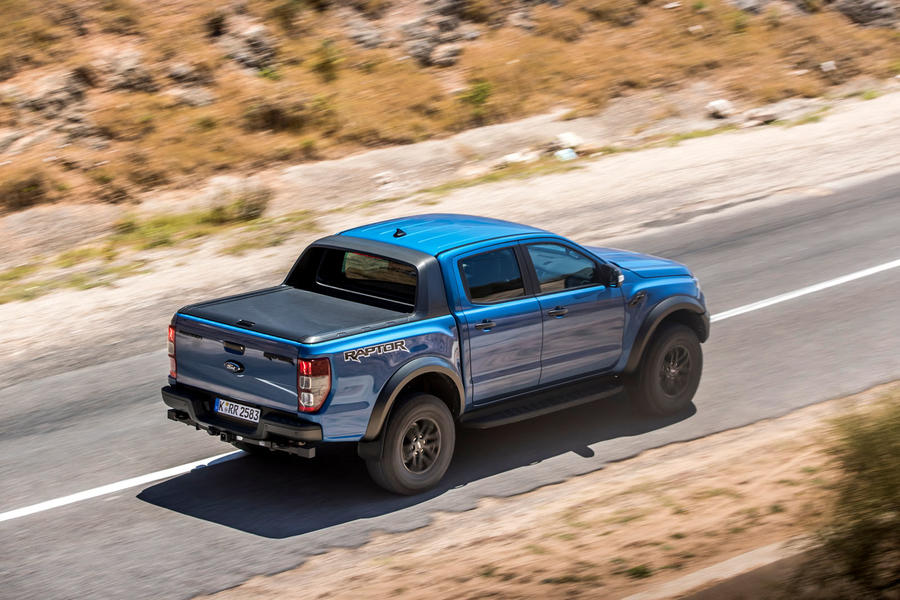 It’s quite a curious car, this. The route on which we’ve been able to drive the Raptor so far has been incredibly demanding but reveals it’s exceptionally capable.

We’ve found in the (gratuitous self-promotion alert) videos we’ve made that separate chassis/body SUVs and pick-ups are best off road, but the difference with the Raptor is that it’s happiest going there at speed. On rough tracks, the dampers are better if you go faster, the chief engineer tells us, and on trying it, it seems he’s right. The Raptor is a kind of five-seat Ariel Nomad with a decent boot. The inspiration for the entire Raptor project came from seeing off-road rally recce vehicles, so I suppose that shouldn’t be a surprise.

The steering’s light, you’ll find paddles attached to the wheel should you choose to use them, but the engine and gearbox are responsive either way. Given the modest straight-line performance, though, they’re far from the main action. Even deliberately so: there’s active noise cancellation in the cabin, so a muted thrum from ahead is the most you hear. This is not a hot rod.

Body control is good – considering this is still a 2.5-tonne vehicle – and wheel articulation really impressive. It’ll go places only the most serious off-roaders will go, and it’ll go there faster than all of them, I’d have thought. So in the right place, it’s terrific fun.

None of this will matter in Godalming town centre, of course, but you could say the same about taking a Ferrari away from Fiorano. Similar deal here, really: it’s an off-road sports car.

The rest of the Raptor package is quite serviceable. There are new seats, nicely but not overly figure-hugging, and some more upmarket trim arrives, in places, to help justify this being a near-£50k pick-up truck, which it just about gets away with. Ford’s infotainment remains fiddly but will mirror your phone, there’s reasonable rear-seat accommodation. And not much else to report: the action happens when it’s moving. 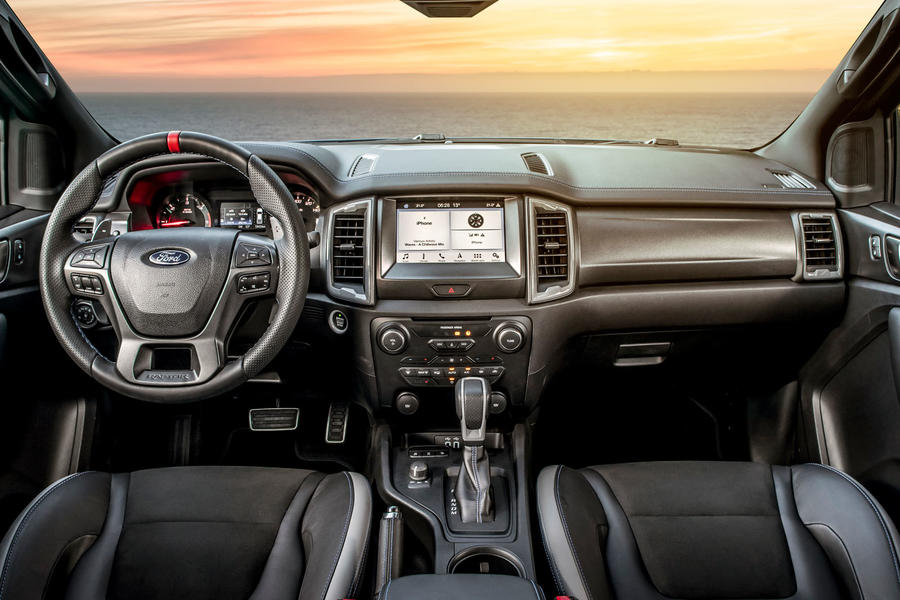 There is an argument, and it’s one I understand, that the Ranger Raptor should have an engine more in tune with its chassis performance, rather than the equivalent of, say, putting a 1.4 diesel into a Toyota Supra and pretending that’s fine. This is the only performance car in my recent memory with a 0-62mph time of over 10 seconds.

But when you see the raw chassis in the metal, you realise how much work they’ve put into it, and when you bang it down a gravel track at a speed that would eject you clean through the window of a standard Ranger, it’s easier to understand the path they’ve taken.

Yes, Ford could have just dropped a 3.5 V6 with 400bhp into a regular Ranger, fitted big tyres and called it there, and I suspect it would have made just as many ripples. But the chassis mods are the expensive bits on an extremely capable car: to say you just want a big engine instead is, in a way, to call for less integrity, rather than more, and I’m not sure I’m prepared to do that. Besides, we all know slow is the new fast.

So the more I think about it, the more I rather warm to a total oddball whose appeal is rather more than skin deep. Certainly there’s nothing else quite like it, and trying to convert a regular pick-up into something similar, while interesting, would probably cost you more. Ford has, basically, created a small new market niche, and it’s a car I find a lot more interesting than yet another premium crossover.

So should you buy one? I’ve no idea. I feel like it’s recommending a Morgan 3 Wheeler or an Ariel Nomad or a Rolls-Royce Phantom: if you want one, sure, go for it. You’ll have bought one of the most intriguing cars on the market today, and there’s merit in that alone. 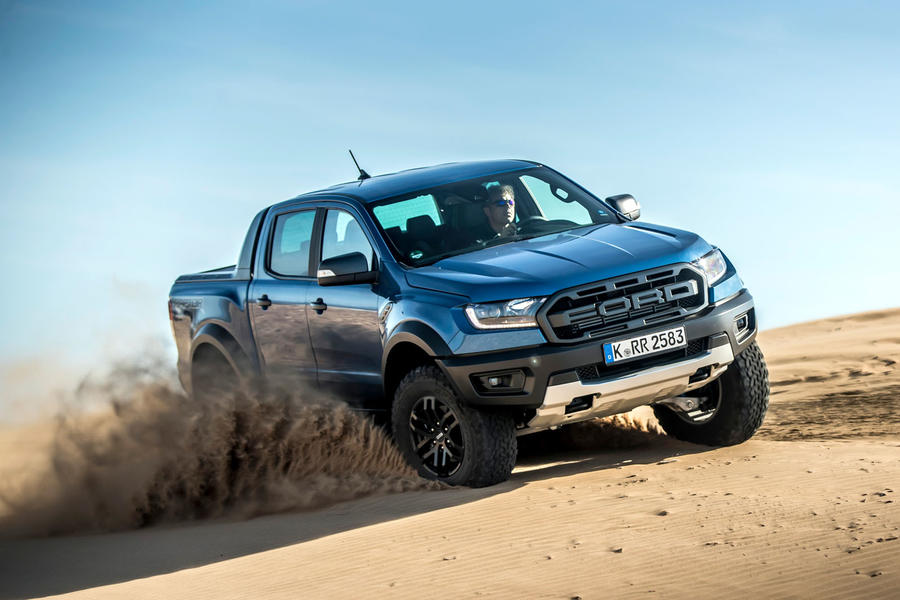 In the states they get the Ranger with the 2.3 Ecoboost. Not sure if it's the one from the Mustang or Focus RS but either way it packs a decent punch and could make a useful compromise between this diesel and a full fat V6 Ecoboost. It's even rated at 21mpg city, 26mpg highway (US gallons) which isn't terrible considering the power on offer and the weight its dealing with.

Why are British consumers - and motoring journos - so damn supine? Ford must think we're all mugs and/or imbeciles if they seriously expect us to pay £50k for a 4-cyl diesel truck that would struggle to pull the skin off a rice pudding. Why aren't we protesting outside Ford's UK HQ? Why aren't we writing furious letters to Dearborn? And Mr Matt 'such is life' Prior, why are you so relaxed about the situation? Where's your campaigning zeal?
When Ford started selling RHD Mustangs over here - having inflicted the 1.3 litre Crapi upon British roads and kept us waiting half a century for the real deal - I really thought the bad old days were behind us. Sadly it seems I was wrong. Ford needs to get a grip of reality and stop treating its UK customers like second-class citizens. We have the internet now, we can check prices and specifications in other countries. And we can see when we're being ripped off.
kboothby 2 May 2019

The people get what the people want...

Not all of us are fodder for the Jeremy Kyle generation, blindly following trends.  I like these crew cab pickups, looking at one as my next company car if the BIK remains reasonable. What I WILL NOT DO is rant on about how ill-informed, selfish and wrong someone elses choice of transport is as so many commentators on here do with such venom and spite. You can almost see them foaming at the mouth as they hammer the keyboard with their puerile, hate-filled responses.

I am currently on my second ranger and absolutely love them you get a lot of car for you money, I would be too worried about getting the boot dirty in a Range Rover. I have been wanting Ford to do a Ranger Raptor version for years ever since I clapped eyes on the F150 Raptor over in the states so to say I am just a little disappointed in the engine/power output from the Ranger Raptor  is an understatement!!!!!

But will I get one hell yeh just for how it looks.