From £15,1206
New Ford Ecosport is an improvement on its predecessor, but the small crossover game has moved on significantly, too
Open gallery
Close

This is the new Ford Ecosport, which appears broadly similar to the model it replaces but has work to do if Ford is to capitalise on the vast sales potential of the UK supermini-SUV segment.

How much work? Rather a lot, truth be told. Consider that the opening gambit of our road test verdict on the original ‘global’ Ecosport, put upon us in 2014 and built on the same platform as the Fiesta, read: "It’s a been a long time since a new Ford was as bad as the Ecosport".

It wasn’t a judgment we took pleasure in delivering, but the interior felt cheap in a way contrary to the asking price, and when it came to handling and ride, this was a car beset with incurable problems. Flat-footed while at the same time lacking grip, the chassis was criminally under-damped, falling well below the often industry-leading standards set by Ford. Performance was merely adequate at best, too.

Positives were scarce, even if the Ecosport was decently spacious and its raised ride height meant it had a greater wading depth than the all-conquering Land Rover Defender (we didn’t see that one coming, either).

And so, to the new Ecosport, which Ford unsurprisingly sees as something of a fresh start. The cartoonish – ‘cheeky’, Ford calls it – looks remain, although the overall demeanour undoubtedly has a harder edge. The LED daytime running lights are new and frame a large, notably more aggressive grille flanked by piercing headlights. The front and rear bumpers have been tidied up, there are plenty of new paint colours on offer and the designs for the larger wheel options – 17in or 18in – are new (there’s also the option of a boot-mounted spare). In entry-level Zetec trim, the Ecosport still rolls on 16in wheels.

Mechanically, the new Ecosport sports the same basic layout as the original, with a MacPherson strut front axle leading a torsion-beam rear. Ford has, however, now tuned the car ‘specifically for Europeans', so the claim goes. That means the springs, dampers, steering and ESP have been tinkered with to yield – you’d hope – a more composed ride with body control that doesn’t leave you wondering whether Ford has somehow misplaced the engineering staff responsible for satisfyingly sharp Ford Fiesta and Ford Foccus hatchbacks.

There are also two major additions for this 2018-spec Ecosport: a new 1.5-litre Ecoblue diesel engine and Ford’s Intelligent All-Wheel Drive system, which can adjust the torque split between the axles to the extent that 50% is directed to the rear almost instantaneously. Alas, you can only get the latter of those technologies if you opt for the former, and AWD cars aren't expected to arrive in Ford showrooms until the middle of 2018.

That new engine develops 124bhp and 221lb ft and is joined by the older Ford Ecosport 1.5-litre TDCi oil-burner, which makes 99bhp and, frankly, wasn’t much cop in the old model, with poor mechanical refinement and equally disheartening fuel economy.

But more people will be lining up a petrol model as uncertainty over the future of diesel mounts, and Ford’s much-admired Ecoboost engine is available in two specifications. There's a 1.0-litre turbocharged three-cylinder unit tuned to deliver either 124bhp or – new for the Ford Ecosport - a range-topping 138bhp. Claimed fuel economy is a combined 54.3mpg for both, though equipping the less powerful engine with the optional six-speed automatic gearbox (unavailable on the more powerful car) drops that dramatically to 48.7mpg. 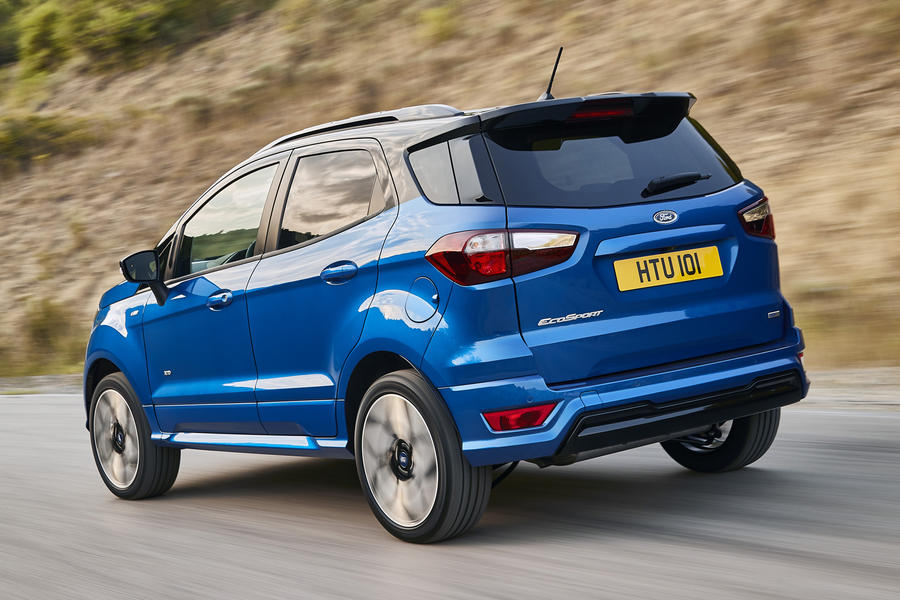 The interior is a big improvement, with simpler switchgear and a central infotainment screen (6.5in as standard, 8.0in for Titanium and ST-Line models, both with Android Auto and Apple CarPlay) mounted at eye-level. The Ecosport isn't entirely free of the hard, scratchy plastics that blighted its predecessor, though. The seats are softer, more supportive and slightly perched, giving good visibility. A leather steering wheel is standard. Overall, it’s a good start.

The Ford Ecosport's Ecoboost engines are expectedly likeable, too, and although our preference would be for the more powerful variant, the 124bhp version is fit for purpose, even if its 0-62mph time of 12.7sec does seem slow.

The six-speed auto 'box is characterised by perhaps the smallest shift paddles in existence, mounted on the wheel. If you’re merely pottering, the 'box tends to upshift smoothly enough at just beyond 3000rpm, but if you call for a downshift to execute an overtake, there’s often a frustrating pause before the lower ratio is engaged. The issue here is that the three-cylinder engine, while willing enough to rev out, isn’t particularly torque-rich, and so this scenario is a frequent occurrence. The six-speed manual not only remedies this lag but serves up more involvement, making it the better bet.

Now, the chassis. There’s no doubt that Ford’s alterations have improved matters, but the long and short of it is that the Ecosport trails the class-leaders, such as the Seat Arona, by a fair margin when it comes to ride and handling.

Canter along smooth roads with little in the way of direction changes and there’s little to criticise here, apart from an ever-so-slight fidgetiness. Indeed, hook the gearbox into sixth and the car takes well to motorway duties, wind noise from the thin-framed wing mirrors notwithstanding.

However, on smaller, more corrugated roads, the Ecosport crashes over ruts and through compressions, with the suspension then requiring a second bite at the cherry to get the car's tall body back under control. The ride quality also lacks finesse low speeds – town driving, in other words – which is tough to forgive in a supermini-SUV.

Lateral roll is adequately contained, which we couldn’t say for the previous Ecosport, but those hoping for an elevated Fiesta – and with it, you’d imagine, a new dynamic benchmark in the supermini-SUV segment – will be disappointed.

That said, two areas in which the Ecosport is true to Blue Oval type is in its steering, which is nicely weighted, consistent, accurate and surprisingly feelsome, and its brakes, whose level of assistance seems just about right for this kind of car. These make the Ecosport pleasant enough to drive until you’re going quickly enough for the chassis’ issues to surface.

Another first for is the availability of sporty Ford Ecosport ST-Line trim, which Ford reckons will take 35% of sales. This adds sports suspension, more belligerent bodywork, plenty of dark trim and a few luxuries inside and costs £800 more than the mid-ranking Titanium trim. But while the sports suspension improves matters, it doesn’t raise the chassis out of its inherently soggy state. The Ecosport was difficult to recommend in its previous incarnation, and while Ford has made gains, the game has moved on commensurately, leaving the Ecosport once again adrift.

Its interior is now a match for any rival, and there’s an impressive array of technology as standard, but the less characterful, more competent Seat Arona looks prettier and rides with the composure and class of a model from a larger segment.

It’s still the class leader and the rival that the Ecosport has failed to match. 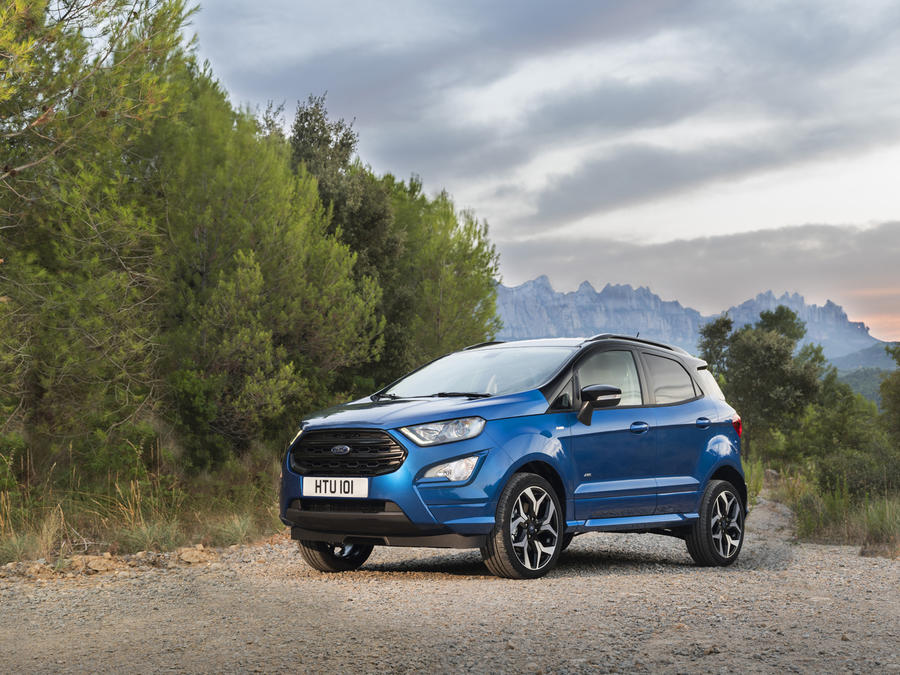 in a class of horrible. In a fight to the death with the Nissan Puke as the most pointless ugly car on sale today. It will go the distance and to the judges. Maybe a points win for the Puke.

The Bentayga is a £150k version of this pile.

I'm surprised how many

I'm surprised how many Ecosports I see on the road, and always feel sorry for their owners and what they are having to make do with. Ford certainly dropped the ball with this one, spending all that time and money on the engineering for the now defunct B-Max, when they should have been putting their efforts into a small SUV. Other manufacturers saw the demand for this type of vehicle coming, how come Ford's product planners didn't?

I'm surprised how many Ecosports I see on the road, and always feel sorry for their owners and what they are having to make do with. Ford certainly dropped the ball with this one, spending all that time and money on the engineering for the now defunct B-Max, when they should have been putting their efforts into a small SUV. Other manufacturers saw the demand for this type of vehicle coming, how come Ford's product planners didn't?

I thought they did with the suv esq fiesta fusion, this should have improved upon the fusion but being a budget car from india like the new ka+ meant it was hobbled from the start. A wasted opportunity.

Sorry but I'm not sure why Ford have bothered updating the Eco Sport again,it's still nothing that special the introduction of the new engine and the availibility of an AWD version is too little too late. The asking price of well over £17k is beyond belief especially when you consider it's built in India, £ for £ the Ssongyang Tivoli or even the MG ZS is a much better prospect than this, if Ford is serious about selling this knocking four grand off the sticker price might be a start

The asking price of well over £17k is beyond belief especially when you consider it's built in India, £ for £ the Ssongyang Tivoli or even the MG ZS is a much better prospect than this, if Ford is serious about selling this knocking four grand off the sticker price might be a start

I like the car for what it is; a hardy little SUV and see it as a Dacia-type model. However, the prices are quite steep.