From £18,7006
Can the updated Ford Ecosport improve its reputation and become the small SUV of choice, or is it another misguided effort from the Blue Oval?
Open gallery
Close

This is the updated version of Ford’s troubled Ecosport, a compact SUV that was given a rather rough time when first reviewed by us back in 2013.

We’ve already sampled the 2018 model in Portugal, but now we’re putting it under the microscope on home turf for the first time.

Ford will no doubt expect to see the Ecosport's popularity increase. SUV sales in Europe continue to grow, and the manufacturer predicts that one in every three new cars sold by 2020 will come from this segment, with compact models accounting for a generous portion of that figure.

Rival firms haven’t been lazy when it comes to launching their own contenders, either, which only makes the Ecosport’s job of standing out even tougher.

Ford is keen to point out that the revised Ecosport features 2300 new parts, although the basic layout remains largely the same.

For the suspension, that means independent MacPherson struts up front with a torsion beam at the rear. However, Ford says that it has now tuned the Ecosport’s chassis specifically with European drivers in mind.

A familiar engine line-up is also present. Kicking things off is the 1.0-litre Ecoboost petrol, which is available in both 123bhp and 138bhp guises, while a 98bhp 1.5-litre TDCI is the sole diesel offering. A four-wheel-drive 1.5-litre Ecoblue diesel model will join the range mid-year.

The most noticeable change, however, is the revised exterior. Where the original Ecosport looked overly cutesy and cartoonish, this new model looks far more purposeful. The trapezoidal grille has been enlarged, while angular foglight housings help complete a front three-quarter profile that Ford claims was inspired by rucksack straps. Supposedly these hint at the Ecosport’s “adventurous character”. Make of that what you will. 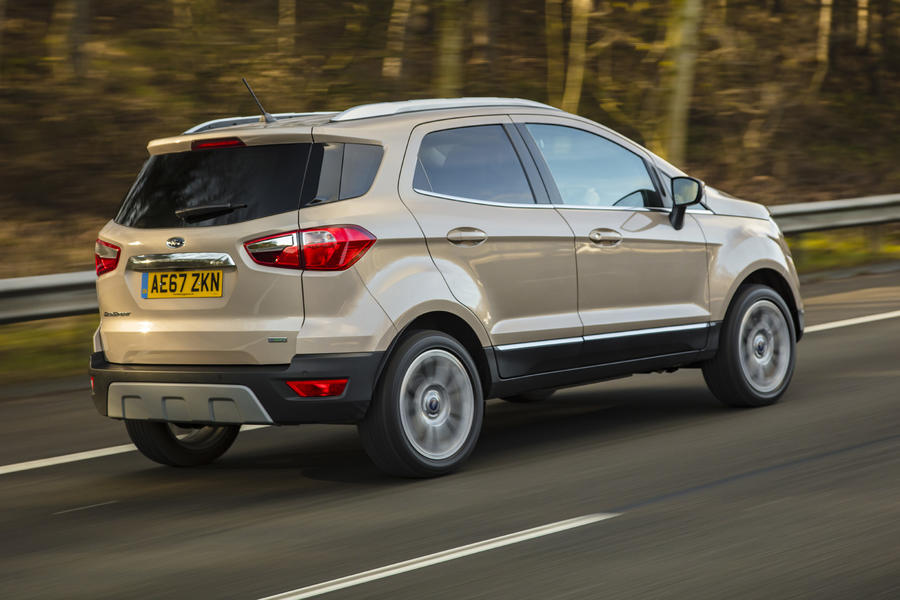 Petrol variants, particularly the 123bhp Ecoboost, will make up the vast majority of Ecosport sales in the UK, so that’s what we’re driving here.

Our test car was in entry-level Zetec trim, which will set you back from £17,495 and includes standard features such as 16in alloys, a 6.5in infotainment touchscreen, a DAB radio and Apple CarPlay and Android Auto smartphone mirroring.

While we didn’t have too much cause for complaint so far as equipment is concerned, the same can’t quite be said of the way the Ecosport drives – European tuning and all.

Now, Ford can make a good car - just look at the excellent new Ford Fiesta - but the Ecosport apple seems to have fallen rather far from the proverbial tree.

There’s no real environment in which this car truly feels in its element. Around town, the ride is noticeably firm - even on the 16in alloys of our test car - while on faster country roads, there's a worrying sense of skittishness that meant you can never feel properly confident in the car’s dynamic abilities.

The uneven surfaces that are so prevalent here in Britain only serve to further upset the Ecosport, while undulations create noticeable vertical movement. Sudden directional changes expose considerable amounts of lateral roll and cause the Ecosport to feel decidedly top-heavy.

This body roll is mitigated ever so slightly by the sports suspension fitted to the ST-Line model, but this has the adverse effect of making the car feel even more nervous over pockmarked roads. The Ecosport is by no means dangerous in its set-up, but next to rivals such as the Seat Arona, it's left wanting dynamically.

Out on the motorway, the Ford Ecosport settles down considerably. The only real complaint here is a good deal of wind noise around the door mirrors. This is drowned out by road noise if you go for the ST-Line model with optional 18in alloys.

The Ecosport isn’t without its merits, though. The steering, for instance, is consistent and well-weighted, while the pedals are sensibly spaced and easy to operate. Adult passengers won’t feel uncomfortable when sitting in the back either, with decent head and leg room.

Ford's Ecoboost engines are also impressive. We sampled both 123bhp and 138bhp variants, and neither feel like they aren't up to the task of getting the Ecosport up to speed.

And the six-speed manual gearbox, while a bit long in the throw, feels direct and purposeful in its action. 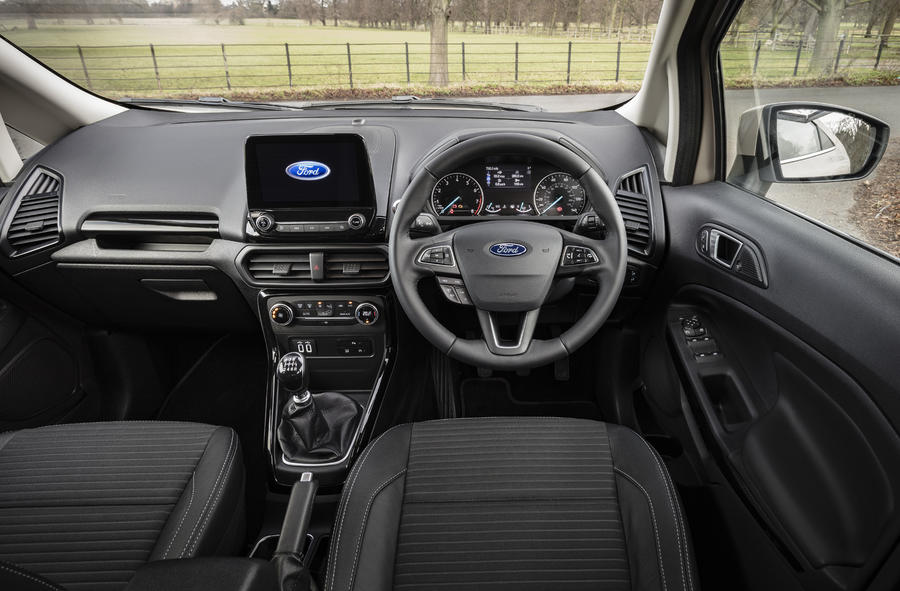 The Ecosport remains a tough car to recommend. Sure, it’s relatively spacious and well equipped, but so is a Volkswagen Polo, which not only costs more than £1500 less on a like-for-like basis but also offers a far better drive – if a little less power.

If you’re really set on the idea of a compact SUV, Seat’s class-leading Seat Arona is the current go-to model, owing to its composed ride and more attractive looks.  And even if you’re absolutely adamant you want a small, high-riding Ford, it's probably worth waiting for the forthcoming Fiesta Active, which will arrive later this year. 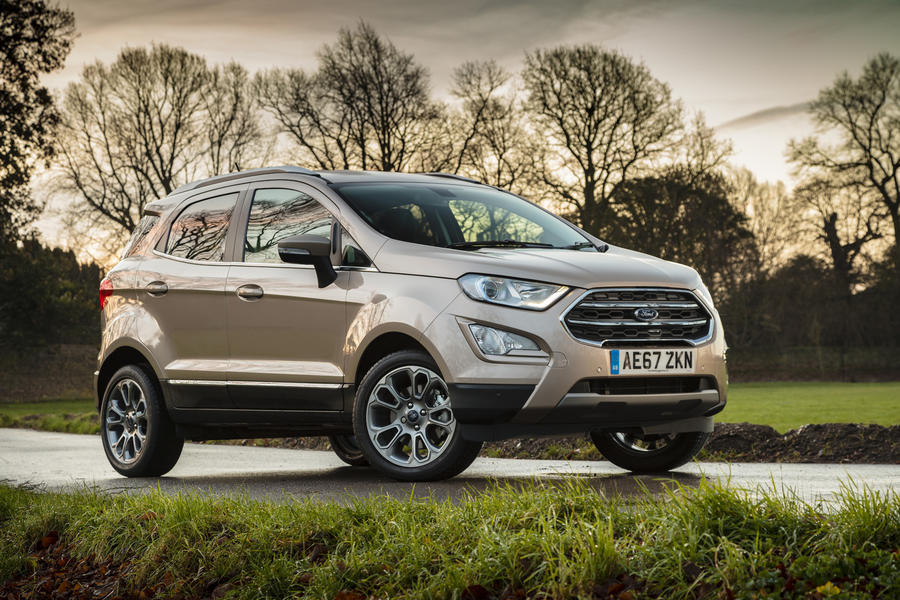 Utterly contemptible effort by Ford at a small SUV. Late to market and poorly implemented, the competition have nothing to worry about.

You have to wonder what Ford

You have to wonder what Ford's product planners were doing a few years ago, when they spent all that time and money developing the defunct B-Max, and didn't seem to notice the market obsession with SUVs coming. They are certainly trying now with this one, but it will never be great.

You have to wonder what Ford's product planners were doing a few years ago, when they spent all that time and money developing the defunct B-Max, and didn't seem to notice the market obsession with SUVs coming. They are certainly trying now with this one, but it will never be great.

Well exactly. Ford are very risk-averse but even so i have no idea why the Focus hasn't been used as the basis for a C-segment x-over. Everyone else has been at the party for years.

turd it is, along with cmax

Ford have lost their way getting rid of the family jewels ie JLR,Volvo Aston.They try to sell an over priced and hyped Vignale or whatever the wretched thing is called in each range.Ford if Fiesta and Focus full stop with a few suv's.You hardly see a cmax these days the previous model was a popular family  choice .