Suzuki’s ongoing electrification efforts mean that every car it sells now offers some form of hybrid assistance. The Swift Sport is the latest to join that list, turning what was once one of the last naturally aspirated hot hatches into something of a pioneer for the class.

It gains a 48V electric starter/generator and battery, instead of the 12V system seen in Suzuki’s other models, which promises to cut emissions and boost fuel economy while also filling in the 1.4-litre turbo four-pot’s torque gaps below 2000rpm.

Going hybrid has seen a not insignificant drop in power, from 138bhp in the outgoing car to 129bhp here. Top speed stays the same, but this new car takes a full second longer in the 0-62mph sprint. And while the Swift Sport remains light, the added electronics means it can no longer claim to weigh less than a tonne.

The biggest change is the price, which now sits north of £21,000. What was once one of the most affordable hot superminis is now so close to an entry-level Ford Fiesta ST that it would barely make a difference to your monthly payment. A Volkswagen Up GTI is some £6000 less. 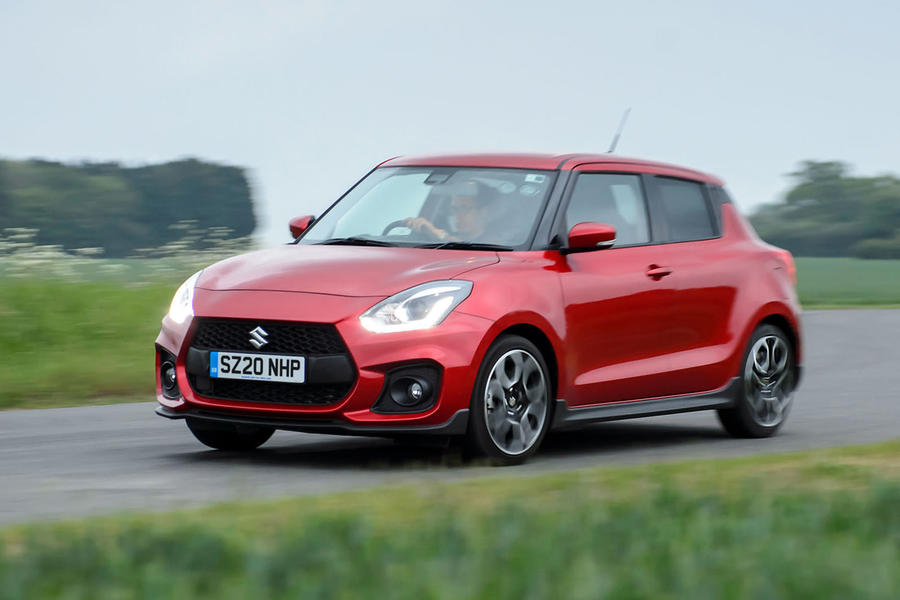 Mild-hybrid power hasn’t had a transformative effect, with the electric motor never directly driving the wheels, but the torque assistance lower in the rev range helps acceleration feel a little more progressive than before. It may not be quite as urgent off the line as the outgoing car, but in-gear pace remains very good.

Less in keeping with the junior hot hatch brief is the way it recuperates energy, the regenerative braking system aggressively stripping off speed whenever you lift off the throttle. For a car that’s largely about maintaining momentum, it’s just a little too intrusive and there’s no option to dial it back.

The six-speed gearbox has fairly short ratios and the Swift will cruise along at 30mph fairly happily in sixth. The gearshift action isn’t all that satisfying, although the well-positioned pedal box does at least make heel-and-toe changes easier to pull off.

As before, the Swift Sport’s firmly sprung suspension and chassis set-up allow for high approach speeds and late turn-in through corners, making it an entertaining drive - even if the artificially heavy steering rack doesn’t provide much in the way of steering feel. It also means the ride jostles over even fairly smooth roads in a way that can get tiresome over longer journeys.

The battery is located under the front seats, so there’s no reduction in interior space, although it does mean the driving position remains more perched and upright than perhaps we’d like from a peppy supermini. As before, the rear seats are best reserved for children on anything other than short trips.

The Swift Sport remains well equipped for the class, with a full complement of safety systems, adaptive cruise control, collision avoidance and traffic sign recognition. The infotainment system might appear basic, but you get DAB radio, satellite navigation and smartphone mirroring as standard.

The low-resolution digital instrument binnacle packs in a surprising amount of detail, like boost pressure and even a G-meter. It can also show what the hybrid system is doing now, though the single button on the steering wheel makes it a bit laborious to toggle through the multiple screens. 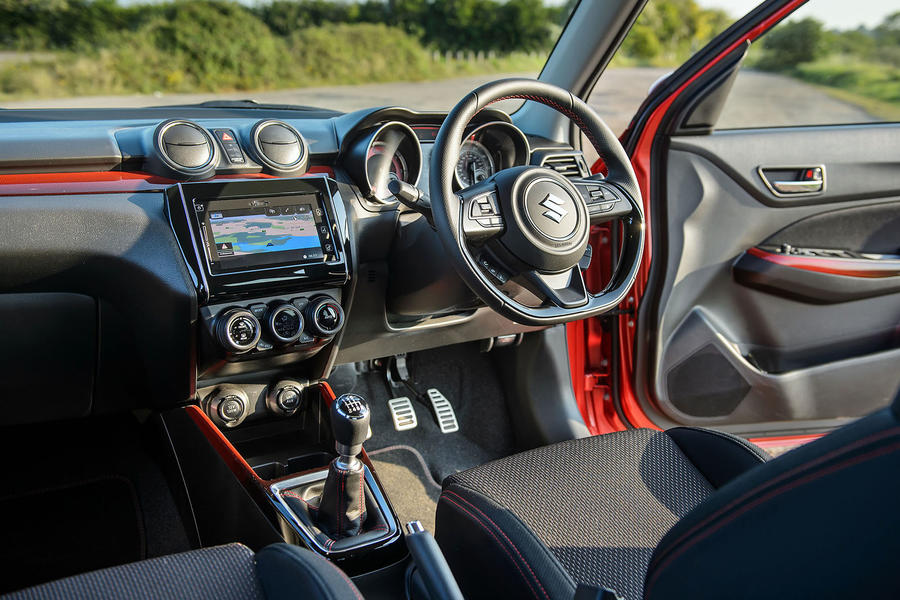 Suzuki may insist the Swift Sport is less an all-out hot hatch and more a car to have fun in at lower speeds, but the increased costs associated with going mild hybrid now put it among more focused rivals. A VW Up GTI is significantly cheaper and the Fiesta ST is a more capable performer all round. An RS line Renault Clio, merely a warmed-up hatch rather than a hot one, is just as quick and almost as efficient.

It remains a fun small-scale driver's car after electrification, but with value no longer on its side, it’s harder to make the case for ownership - however much fun you might have behind the wheel of one. 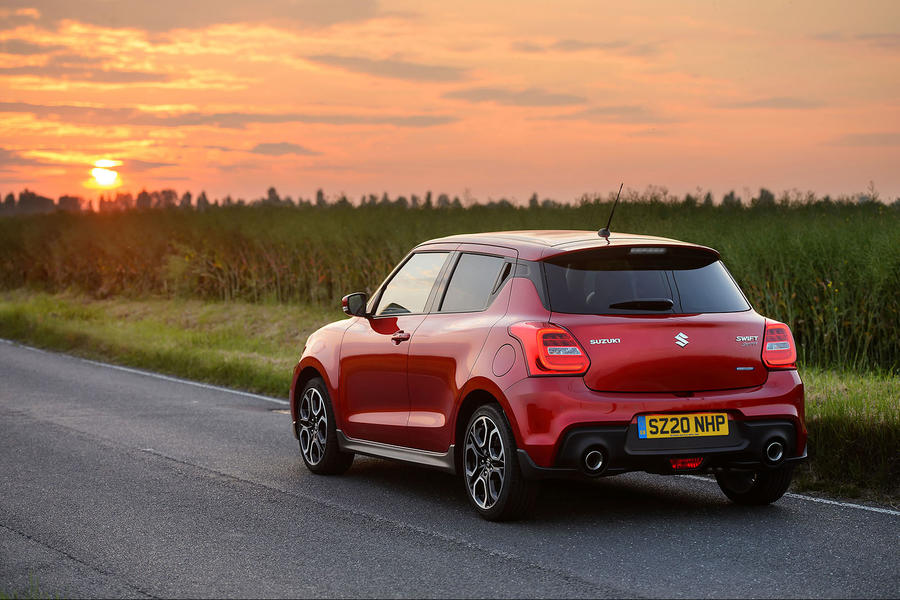 This update brings the car into the hybrid age.

With another 2 brand new cars and Hybrid S Cross & Vitara to come this year Suzuki is on a march.

I just don't understand posts like the one from whiteliner.

'Ok price hike...' What?! 3 grand to make something slower, heavier, less sporty and more complicated to fix when it goes wrong - sounds ok to anyone in a lunatic asylum.

'...but wait till ford, vw etc catch upwith not so small price increases.' They already have and then some - have you seen the recent price hike on the Up Gti (despite no changes, they just reintroduced it after taking it off the market for a while) and all jacked-up car prices from everyone?! They're ludicrous!!!

'This update brings the car into the hybrid age.' Why?! Hybrids have no bottom line benefits to the customer, they are just heavier, slower, more complex when going wrong and much more expensive (in addition to no government incentives now as classed the same as normal ICE cars). But you might get 1mpg more out of it - yippee!

'With another 2 brand new cars and Hybrid S Cross & Vitara to come this year Suzuki is on a march.' No they're not!!! They've gone from makers of good, bargain cars (who could be forgiven certain quality control issues for the price) to grossly overpriced also-rans - they'll lose their customer base for sure now. The model of Vitara I had my eyes on during lockdown cost around £16,500. That same model now costs a shade under £21,000 WITHOUT the hybrid gubbins!

If not an easily fooled consumer tricked by finance deals, they must be a car salesman or dealership owner.

Hybrid ruins one of the best

This car is now trash, not fit for it's Sport suffix or someones near 22k of hard earned.  It's not even that economical, 50mpg 127g/km is what the far heavier and bigger Golf 1.5 registers.  Suzuki shame on you, and I reckon deep down the dealers feel the same.

I think I'm only the one

I think I'm only the one pleased for the arrival of this new model.  It's what allowed me to pick-up a 2019 demo from a dealer just a couple of weeks ago for under £12k. I doubt this new model is trash though, the equipment remains epic and there's already YT videos online of this new model doing 0-60 in the 7's.  But anybody paying full price for this model (or the last model) has rocks in their head.

I think I'm only the one pleased for the arrival of this new model.  It's what allowed me to pick-up a 2019 demo from a dealer just a couple of weeks ago for under £12k. I doubt this new model is trash though, the equipment remains epic and there's already YT videos online of this new model doing 0-60 in the 7's.  But anybody paying full price for this model (or the last model) has rocks in their head.

This is happening a lot - new models often cost as much as 30% more than the previous ones - how much of this is due to currency devaluation and costs of extra tech is open to debate - but does this mean that someone buying a late previous model could see relatively little depreciation?