From £199,2857
Ferrari's new V8 GTC4 Lusso T has the noise and poise to excite, but as a long-distance tourer it makes a less convincing case for itself
Open gallery
Close

This is the recently facelifted and rather clumsily relabelled Ferrari FF in new, smaller engined form as a lower-priced, less complex alternative to the four-wheel drive V12 GTC Lusso. It’s the first time Ferrari has ever offered a choice of engines in one bodystyle, this slightly more affordable GTC shorn of four cylinders, the front-wheel drive element of the V12’s all-wheel drive transmission and 88bhp.

Gains include twin turbos, intercoolers and extensive plumbing that explain a 55kg weight saving more modest than might be expected, a potentially more entertaining 46:54 front:rear weight distribution than the V12’s 47:53 apportionment and the surprising bonus of a 47lb ft net gain in torque, the 561lb ft peak more generously spread between 3000 and 5250rpm. There’s also a 32% fuel economy gain, while CO2 emissions fall substantially from 350g/km to 265g/km.

The GTC V8 (why didn’t they call it that?) is also less expensive at £199,285, a price few will pay given the scope for rampaging through an extensive options list that includes an illuminating acre of panoramic roof, an instrument screen to terrify your passenger and multiple chances to demonstrate the scale of your wealth through the medium of carbonfibre.

However, the essence of the GTC remains unchanged, its unusually proportioned body providing impressively generous space for four, a powered hatchback, folding 40:20:40 rear seats and a not quite so generous boot. Rear-wheel steering, an e-differential and Ferrari’s driver skills-enhancing side slip control are among your arsenal for Tarmac attacks, along with a fine set of forged Y-spoke 20in rims, perfectly positioned paddleshifts and Ferrari’s excellent manettino which does not include a track setting for this grand touring car. 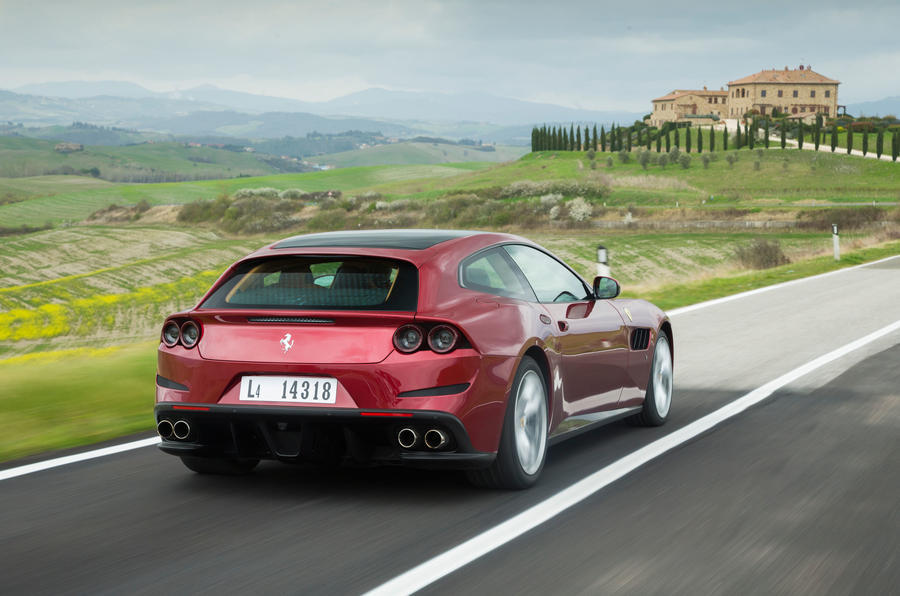 If you’re wondering whether the removal of four cylinders would choke the GTC’s go, worry not – it will smash 62mph in 3.5sec (3.4sec for the V12) and double that speed in just 7.3sec for a 10.8sec assault on 125mph. That should be fast enough for most. You’ll hunt hard to uncover any turbo lag too, the V8’s rev-happy demeanour and an intelligently marshalled seven-speed dual-clutch auto masking any low-rev indolence from the twin-scroll turbos. The transmission’s throttle-blipping downshifts and tremor-free upshifts are also a joy, although the ‘box is sometimes slow to kickdown when left in automatic mode, even with the manettino set to sport.

One potential benefit of the lighter V8 and its altered weight distribution is greater agility - which is duly delivered. Steering geared high enough to demand acclimatisation makes the GTC feel almost nervously agile at first, but familiarity and your rising cornering speeds uncover terrific front-end grip – rear-wheel steering helps - and satisfying precision. Grip from the other end of a lengthy wheelbase is somewhat less secure if you’re eager, the ESC warning light quite often flashing, its brain noticeably staunching the power supply in tight turns. Turn the ESP off and you’ll enjoy more instant supplies of corner-exiting thrust, and the occasional drift with it. Wet weather will doubtless turn those drifts regular and potentially palpatory, given the GTC’s size. 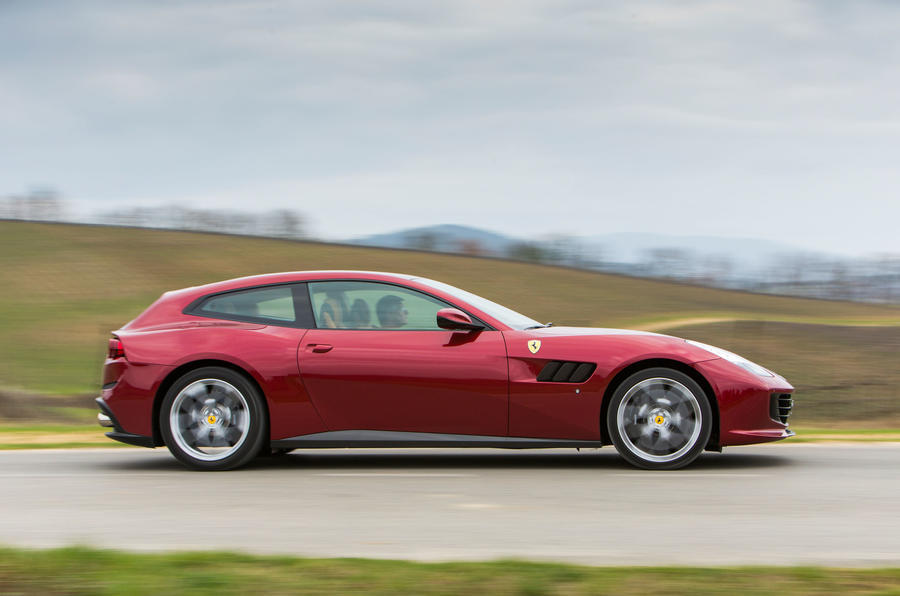 Despite this, it’s easy to build up an immensely satisfying rhythm vaulting from one corner to the next, your rising pace sometimes prompting you to question the effectiveness of the brakes despite their (standard) carbon-ceramic hugeness. That said, they never showed signs of actually beginning to quit, but they could provide more biting reassurance. Your wide-eyed passengers will feel more reassured still if you keep both hands on the wheel at all times, the GTC’s urge to dart down the dip of a falling camber prompting the occasional lunge for the edge of the road and beyond if you don’t get a grip.

Run in comfort with the electronic dampers in their softest mode and you’ll sometimes encounter unexpected float, easily banished by firming them up with a stab of a steering wheel button. You’ll stab the inventively unusual indicator buttons a lot more often, not least because they need a firm prod to fully engage. But difference like this is good. Less good is the GTC’s high-speed cruising refinement, an admittedly turbulent autostrada uncovering a ride lacking long-travel absorption, and more of those camber-triggering jinks. The suspension is not the quietest either which is less of a surprise given the GTC’s agility and tyre width. 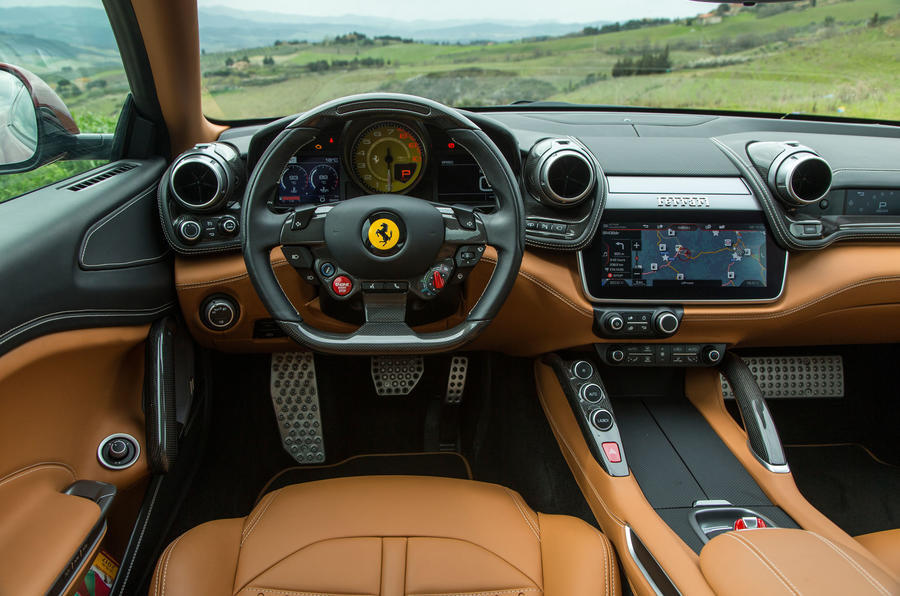 GTs – and GTCs – are supposed to be lightly practical, civilised mile-crushers of athletic bent and eye-arresting elegance. This Ferrari delivers thrillingly on the agility, impressively on comfortable passenger carrying - if not their luggage - and it certainly makes an arresting sight with the scale of its cab-rear, long-bonnet masses. But it’s certainly not Ferrari’s most elegant GT, nor its most space efficient – the mid-front-engine V8 almost looks lost in its bay – and it certainly isn’t as relaxing a long-distance machine as the Bentley Continental Maranello cites as a competitor.

But as a thrilling ride for four, it’s almost unparalleled. Unless you’re planning regular long-distance trips to your villa/yacht/business, this V8 GTC is a terrific drive. If it were smaller, prettier and a less busy cruiser, it would be brilliant.

Ii enjoyed reading about another super-car that I can't afford... tough luck! Maybe when I win the Lottery...
Now, at the bottom of this message, if it is published, there will be an old message sent to Autocar; the complaint therein has been addressed but the message is still there: how can I get rid of it? any ideas from learned commenters? thanks!
bowsersheepdog 25 March 2017

Ii enjoyed reading about another super-car that I can't afford... tough luck! Maybe when I win the Lottery...
Now, at the bottom of this message, if it is published, there will be an old message sent to Autocar; the complaint therein has been addressed but the message is still there: how can I get rid of it? any ideas from learned commenters? thanks!

I don't like that lip across the tailgate between the tops of the rear light clusters. Nor the tiny rear side windows, obviously. But overall I think it's a decent looking estate-ish car. While not practical in a general sense, by the standards of Ferraris, Lambos, Paganis, Koenigseggs, McLarens and so on it does pretty well.

While potential customers may consider the likes of a Panamera or Continental as an alternative, those cars weren't really designed to same kind of brief, and can't be classed as direct competitors. Similarly to how somebody looking at a Toyota GT86 could consider a Golf GTI as an alternative.

It’s the first time Ferrari has ever offered a choice of engines in one bodystyle,

What about the 308 GTB? That was available in Italy as a 2 litre turbo at the same time as the 3 litre V8. Yes it was called the 208, but it was essentially the same car, and certainly the same bodystyle but with a different engine. I am an anorak and I claim my prize.

If I was in the market for a

If I was in the market for a car like this, I'd be looking at a DB11 or 570GT instead - far better looking, cleaner interior and less pretentious (this coming from a life-long Ferrari fan)
View all comments (14)