Before you can mount any kind of serious attack in life or business, you need a leader, which is why the UK team seeking to establish a foothold for Stellantis’s luxury DS marque in this country are keen (and somewhat relieved) to launch their DS 9 flagship model, due in showrooms in September.

It’s an E-segment four-seat saloon, sized and pitched against BMW’s 5 Series and Audi’s Audi A6. Although DS’s UK boss, Jules Tilstone, isn’t bidding to match those majors in volume (success will be measured “in hundreds”, he says), the new model undoubtedly brings a better shape to the whole DS range, which will now consist of four models (DS 3, 4, 7 Crossback and 9), and sharpens the marque’s offer of luxury, quality materials, classy customer service and French ‘savoir faire’.

Although DS hasn’t done well so far in this country, its 9 and recently arrived 4 herald a new determination to expand in the UK, a market that spends generously on high-spec cars.

A current total of 28 UK retailers have been established, with more planned. And as well as attempting to offer class-leading customer service, DS intends to trade on its relevance to modern conditions: all models are already available in electrified form, 30% of 2020 customers chose an electrified car and DS’s CO2 fleet average last year was just 83.1g/km, a figure many rivals would die for.

The 9 is a big car, similar in major dimensions to its A6 and 5 Series rivals, with a 4.93m overall length. It is built on the largest version yet of Stellantis’s EMP2 architecture, giving a generous 2900mm wheelbase whose main effects are to smooth the ride quality, increase rear knee room (class best) and improve the size of the rear doors, which afford better access than many low-roofed rivals.

The car uses a mostly steel monocoque structure with a transverse front-wheel-drive powertrain – in our test car’s case, a 178bhp 1.6-litre four-cylinder direct- injection petrol turbo engine assisted by a 110bhp electric motor. An 11.9kWh battery pack is carried under the rear seats, offering a claimed 34 miles of electric-only range.

There are two trims: Rivoli+, whose all-leather accent is mostly on luxury, and the slightly cheaper but still plush Performance Line+ with an Alcantara interior. A choice of three powertrains is offered with each: a petrol 225 set-up, an E-Tense 225 PHEV and, coming later, a 360 E-Tense 4x4. Our test car was a front-drive E-Tense 225 PHEV Rivoli+.

Prices range at present between £40,000 and £50,000 (our car cost £49,200) but there’s a chance to pay more for an Opera interior that offers ‘watchstrap’ nappa leather for its seats and fascia. And the forthcoming 360 4x4 will be priced well into £50k territory. Even so, for size and equipment, the car compares well with rivals, especially since its Chinese-built quality appears on early inspection to be a good match for that of the Germans and Japanese.

There isn’t really an entry-level 9: all cars are very well equipped with niceties such as matrix headlights and radar cruise, and the plug-in hybrids all get DS Active Scan suspension, an infrared camera that looks down the road for irregularities and configures the adjustable shock absorbers to minimise them. 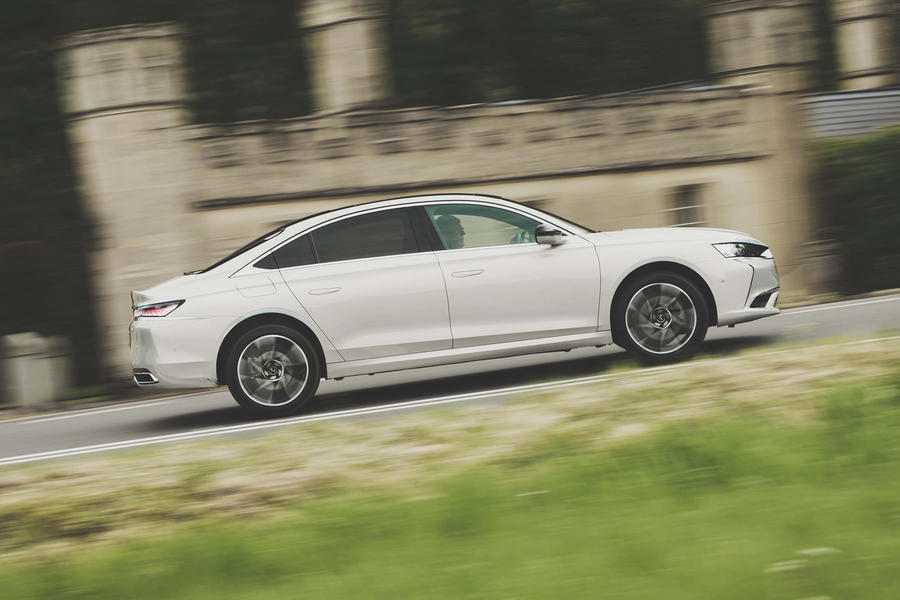 As you approach the 9 to drive it, it appears to be a pleasant mixture of conventional and avant-garde. The sleek body outline is quite Audi-ish, but the details – such as the complex 3D grille, angular headlights, ‘cut-glass’ tail-lights and turn indicator repeaters high on the rear pillars – are all executed with quality and don’t disturb a relatively graceful shape. The wheels are 19in, with different styles for Rivoli and Performance.

Inside, the fascia is full of elaborately designed angular switches and details, not especially cohesive or pleasing to my eye but well executed and undoubtedly a matter of taste. This car isn’t intended to please everyone, DS people point out, and even among hacks who reviewed the car on the same day as us, reactions varied from negative to wildly positive. The interior and instrumentation are well laid out and comprehensive, the cabin is spacious, rear leg room is very generous indeed and head room is fine everywhere. The front seats are firmly comfortable, with excellent adjustable lumbar support and built-in massage functions.

On the road, the 9 gives an enjoyable account of itself, turning a decent 0-62mph time of 8.3sec. There are four drive functions: Economy, Sport, Electric-only and Hybrid (the last biased towards electric town running). Sport sharpens the throttle response and stiffens the ride, although the margins are smaller than in some rivals and you have to try it a few times to feel the difference.

Our preference was Comfort, because that introduced a pleasant suppleness over ever-present British potholes (with occasional loss of wheel control in the big ones) while the look-down-the-road suspension control gizmo seemed to deliver welcome body control on slow and deep undulations, just where supple cars usually suffer from too much ‘heave’.

The steering feels good from the gearing and effort points of view, although it isn’t in the BMW street for accuracy around the straight- ahead (and the car can tramline on longitudinal ridges). The brake pedal feels a mite soft on attack, but the stoppers are strong and easy to modulate, especially allowing the car to be brought smoothly to a halt.

The powertrain’s various modes are notably well integrated. This is a car built primarily for comfort, and if you drive it that way (which doesn’t mean dawdling), you’ll enjoy the way it glides away from rest electrically, and avoids intrusive bursts from the engine that affect other cars of this kind. The propulsion has three modes: near-silence when you’re driving normally, a slightly disappointing four-cylinder noise when you go a bit more briskly and a pleasant although remote snarl when you give it everything.

The standout feature for me was the 9’s refinement. All models use 3.6mm-thick acoustic glass, which noticeably dulls exterior noise. Mechanical noise is low, as reported, but the best feature is low road noise on the coarsest of UK bitumen surfaces, a major advantage over German competitors.

Spend time just driving and it dawns on you this car is a prime example of what PHEVs are supposed to be: an economical and ultra-clean car in town, with the comfort, refinement and long legs for day-long journeys across the country. 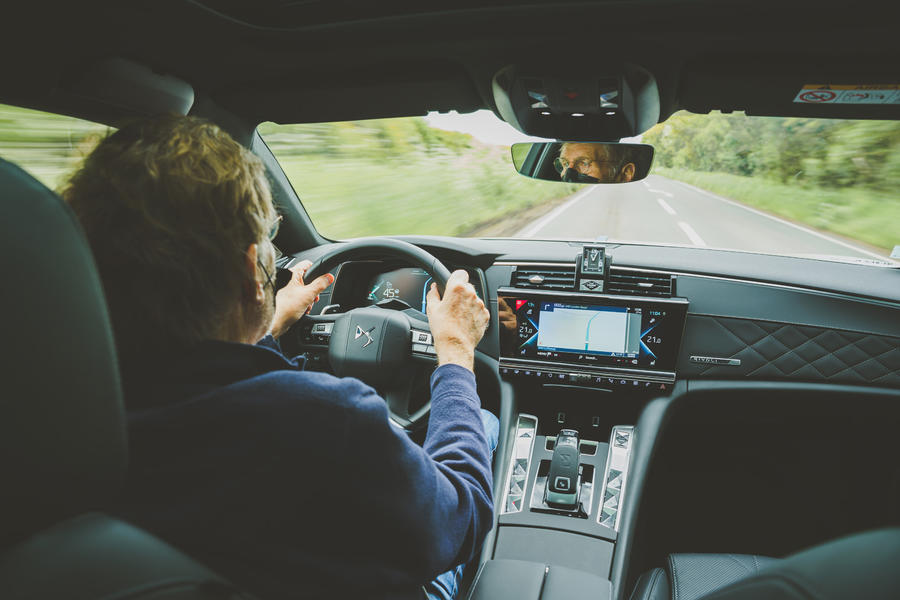 DS’s people face some pretty stiff challenges to establish their marque in the UK and attract the (80% business) customers that could just as easily opt for a BMW.

But they have two weapons with which to fight: the offer of freedom from the same-again syndrome that affects many fleet buyers, and a good car. 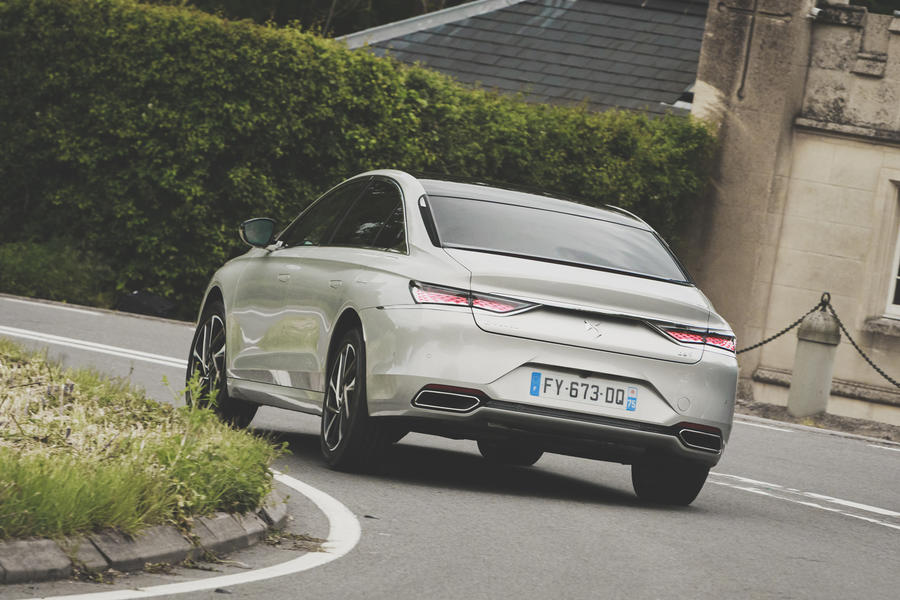 Log in or register to post comments
Commenter 6 June 2021
A comparison test with it's many predecessors like previous features of the 3 series would give guidance on how much progress has been made since the old and big 508, 607, c6, and GM engineered generations of insignia.
russ13b 2 June 2021

I don't get it. Citroen made the 2cv, DS and SM at the same time, and everyone was ok with it. Why does DS need to actually exist? Also, if this will be regarded as a success with sales in the hundreds, why couldn't they just dust off the C6 tooling, and make that again?

I really like it.  At £30-35k it would be a great rival to the A4, Passat, Superb and Insignia but the asking price of £49k is way too ambitious to tempt the badge snobs amongst us.  Does the average buyer even know that DS is a brand?  I doubt it.