From £32,5608
On the face of it, this appears to be a better-looking, cheaper and potentially sharper VW Golf GTI Clubsport. So is there a catch?
Open gallery
Close

On acquaintance, the new Cupra Leon is a puzzling car.

Toffee-coloured trim liberally applied both inside and out might be the aesthetic calling card of the newly formed Cupra sub-brand (no longer is this the Seat Leon Cupra, but simply the Cupra Leon), but it is suggestive of style over substance. Yet when you slide aboard and onto the soft leather of the thickset semi-bucket seats, there it is: the poker-chip-sized button that turns off the ESP, sitting in pride of place, dead centre of the transmission tunnel, begging to be noticed.

It makes you question whether the toffee accents are any more indicative of this car’s true personality than the awful coloured cabin vents you sometimes see on Porsche 911s. Which is to say, not at all. Fingers crossed, eh?

In fairness, this would not be the first time styling chintz has been a red herring when it comes to quick Cupra models. The 276bhp Leon Cupra Ultimate Sub 8 of 2015 (when these cars were technically still Seats) went in hard on the orange details but semi-slick tyres, superb brakes and an expert blend of agility and balance made it one of the finest hot hatches in recent memory.

And while the branding may have changed and six years have passed, many of the same personnel from back then are still involved today, so the knowhow certainly hasn’t vanished into thin air. Along with the almost belligerent positioning of the ESP button, it’s more cause for optimism.

So what exactly is the Cupra Leon? First and foremost, it’s a hot hatch whose power and torque outputs place it right at the sharp end of the front-wheel-drive field. Figures of 296bhp and 295lb ft are only just shy of what you get from the Honda Civic Type R’s revvy, oversquare engine and are an exact match for those of the new Volkswagen Golf GTI Clubsport. Which is no surprise, because this Cupra uses the same EA888 four-cylinder engine as its corporate cousin, in the precise same state of tune – even down to the scope of the peak power and torque windows.

The EA888 in the flagship Golf R makes a little more on both counts, and delivers each over a broader spread of revs, but clearly the Cupra hasn’t in any way been denied the propulsive goods. Eventually, a detuned version with 242bhp will join the range (offering an alternative to the regular Golf GTI), as will a four-wheel-drive estate with 306bhp, which ought to lop roughly a second off this car’s 5.7sec 0-62mph time.

Downstream of the engine sits a standard-fit seven-speed dualclutch gearbox that feeds torque to 19in front wheels shod with 235/35 Bridgestone Potenza tyres (a wheel and tyre package you’ll pay extra for on the GTI Clubsport). However, the crucial ingredient is a version of Volkswagen’s Vorderachsquersperre (VAQ) electronic limited-slip differential, which isn’t an LSD in the traditional sense but achieves a similar effect by having a clutch pack (as it engages, it mimics the ‘locking up’ of an LSD) between the gearbox and the right-hand driveshaft.

Adaptive dampers adjustable through 16 presets are another element of the Cupra that you’d need to pay extra to have on the GTI Clubsport. 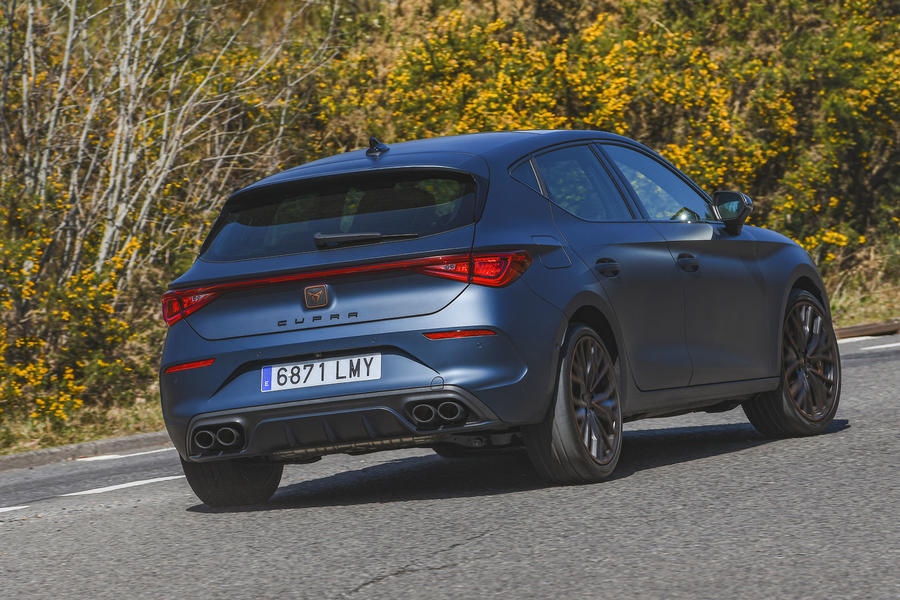 Get going in the hottest Leon and the car is quick to show its personality. Here, you don’t have the same sense of lightness and feedback found in the Civic Type R, not least because, at nearly 1500kg with fuel, the Cupra is quite a bit heavier than its Japanese rival. However, the taut low-speed ride and firm, thin-gauge rim of the usefully small steering wheel do give an immediate feeling of intent.

On start-up, the true engine note is also heavily overlaid with a deep synthesised burble – especially in the liveliest ‘Cupra’ mode, which is easily selectable via one of the two copper-ringed buttons that hang from the steering wheel – but the hairy-chested routine really isn’t necessary here. The Cupra does enough elsewhere to feel decently serious, which is nice because the new exterior design, while quite elegant from certain angles, isn’t quite as cut-throat as that of the old Lamborghini-tinged Leon.

Like almost all modern performance cars, there are plenty of modes to get your head around, beginning with Comfort and moving through Sport and into Cupra. Comfort is fine for pootling and motorway work, but only by the skin of its teeth: on its much shorter springs compared with the regular Seat Leon, the Cupra’s suspension can thump and fidget on poor surfaces unless you have the dampers in or near their most relaxed state.

Sport mode tips the ride quality into feeling brittle and Cupra is plain brutal on British roads. Thankfully, there’s an Individual mode, and we found the best B-road combo is to leave the dampers in Comfort (or, on the new sliding scale, perhaps even a notch softer than Comfort), set the steering in either Comfort or Sport, crack the engine into Cupra and finally pop the engine sound into Sport. (Cupra elicits an implausible, almost V8-flavoured soundtrack.)

Now the car is really ready to be driven, and boy is it quick. Cupra has reportedly worked to improve the shift speed of the DSG ’box, but even if you stripped it of half its ratios, you could still cover ground at an absurd rate. There are three main reasons for this. First, almost 300lb ft is delivered from just 2000rpm, and although we’re now accustomed to this kind of performance from hot hatch engines, it never gets any less effective.

The second bit is that the VAQ LSD-alike seems to kill almost any trace of torque steer, to the extent that the Bridgestones will happily take full throttle in second or third gear, even on thoroughly tractor-dredged back roads. Occasionally, there’s a little scrabbling, but the steering – accurate and geared for confidence, but still too uniform in weight – is mostly incorruptible, and the car explosively quick in a straight line.

Finally, there is that suspension, which really hits its stride when you ask a lot of it. It gives the Cupra an especially good blend of control and absorption once you’re up near the national speed limit on challenging roads, keeping the body flat and resisting much in the way of float, but doing so with surprising finesse. The positivity and response in the brake pedal, which controls Brembo calipers and a pair of 370mm drilled discs, also deserves credit.

Criticisms? This isn’t the most playful or communicative hot hatch. It’s rewarding to drive because it responds consistently and capably, but it doesn’t get under your skin in the same way the Civic does. Or the Ford Focus ST, whose 2.3-litre motor has more of the character that the Cupra’s unit so desperately wants to replicate.

The Ford’s slightly elasticated steering and looser handling take more getting used to, but once you’re on its terms, the car is malleable and expressive in a way the Cupra simply isn’t. There are also times – mostly when the Cupra is fully loaded up on the exit of bends – when you have to imagine a proper LSD would operate more cleanly and effectively. That’s quite marginal, though. 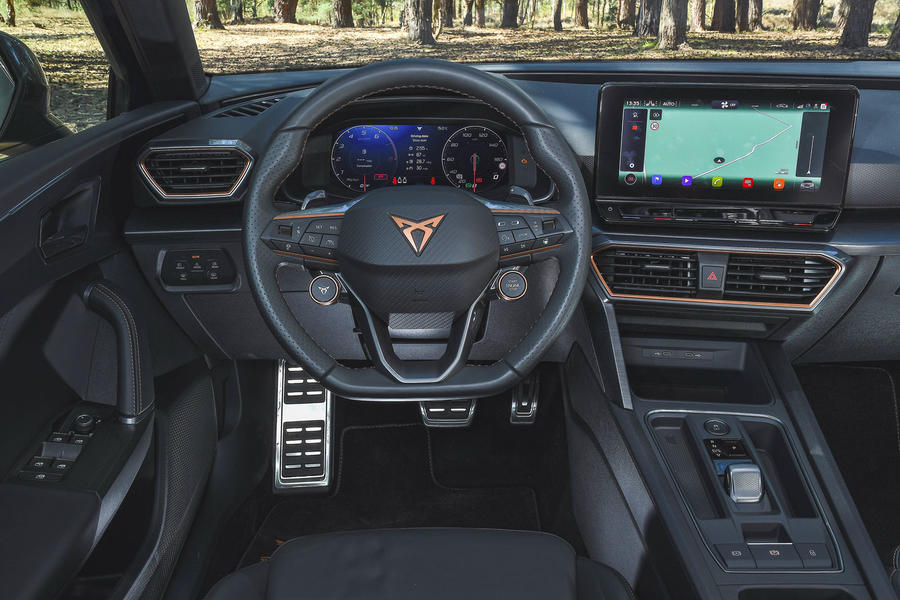 The non-Clubsport 242bhp Golf GTI should be much more concerned.

Assuming you want the VW with the DSG gearbox, the amount you’ll save compared with the 54bhp more powerful, far more comprehensively equipped (both mechanically and in terms of cabin amenities) Leon amounts to just £10. Yes, 10.

That the Cupra is also the more spacious of the two cousins and has plenty of premium feel only hardens its case. Either way, this Cupra is a welcome addition to the class. 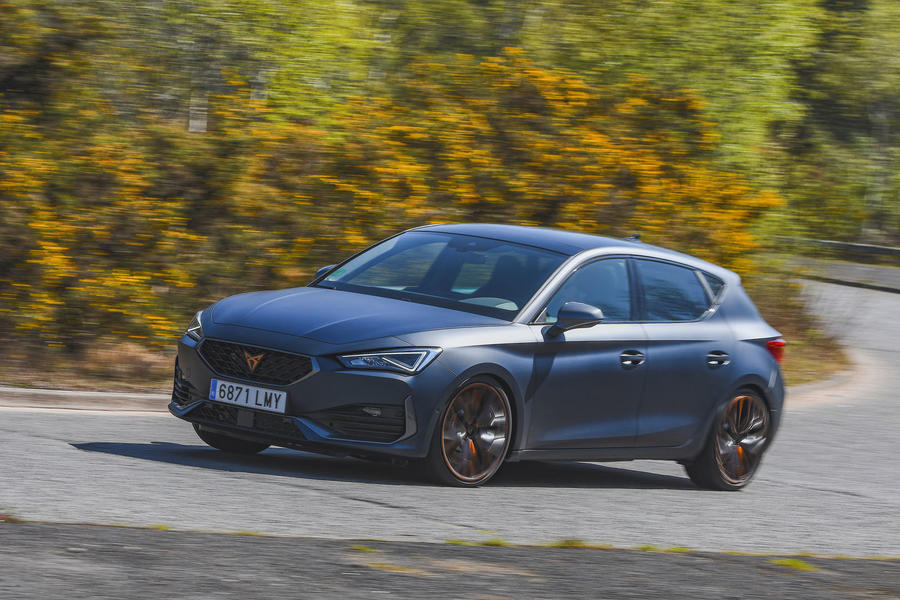 Log in or register to post comments
AddyT 15 May 2021
My Mk7 Golf R is a DSG because the manual has a well known chocolate clutch. As for the performance difference of the Cupra versus the 7R DSG on 0-60. 4WD in the R is likely the answer and without checking I think the Cupra probably weighs more.
lightbody 14 May 2021
I have a golf GTi which came with 19" alloys, and i simply don't think this wheel size is suitable for British roads. I also end up with the adaptive suspension set permanently to comfort.

I'm planning on downgrading it to the 17" wheels which are standard in other countries where the roads are poor.

5.7sec 0-62mph time? That almost a second slower than a MK7 Golf R with the same power and DSG gearbox. Why is that?