Two or three years ago, Citroën explained to us how it was going to give its future cars an SUV look while avoiding the SUV drawbacks of a large frontal area and heavy weight that create more emissions. It had decided it would try to give some rough looks without the frontal area and big ride height, and here is the first example of that plan being put into action: the new C4.

Quite interesting-looking, isn’t it? At 1520mm, it’s 25mm taller than the Ford Focus, and it runs here on 60-section tyres, which are positively balloonish by recent standards. There’s also lower-body cladding for fuller effect and a fastback sort of roofline. Are you convinced? It’s a little shorter than the Toyota C-HR, itself barely a crossover, and again by about 25mm. Who knew the BMW X6 would be so influential?

This has a less aggressive take on things, mind; Citroën is a company that’s often willing to make its cars look a little unusual, and I don’t think that does the C4 any harm.

Similar is true inside, where there’s a wide variety of materials and finishes, from traditional graining to modern technical graining and fabrics, including a bold sash down the door. There’s also a funky new digital dial pack, which is quite small, reminiscent of the one in the Ariel Atom, with a little rev counter and water temperature gauge but a clear speedo, nestled among coloured squares that look like the Breaking Bad logo against gentle backlighting.

When I say this car might rapidly date, I mean it as a compliment, in the way that old Citroëns now have a bit of charm and class. There are hints of GS about the rear three-quarter view, aren’t there? Squint a bit.

More thrillingly, the C4 gets heating and ventilation controls separated from its infotainment touchscreen. Praise be. The screen itself can mirror your phone, and you may find that preferable to navigating the system itself.

The driving position is sound, there’s quite generous space in the rear and the boot capacity is a competitive 380-1250 litres. The C4 is 4.35m long, so not huge for a car in the Volkswagen Golf class. The C4 sits on the PSA Group’s smaller family car platform, which means you get a choice of an internal combustion engine or a battery-electric vehicle powertrain, like you do with the Peugeot 208, Peugeot 2008 and Vauxhall Corsa; the bigger platform offers a choice between ICE and plug-in hybrid.

The C4 could have gone either way, as the next Peugeot 308 still might. I’m told each PSA brand gets to make its own call, and perhaps Citroën’s choice of BEV over PHEV will look the better choice as time goes on. I wonder if it has a higher proportion of private buyers to company car drivers than is typical in Europe, as their lower mileages and more regular routes lend them more easily to a BEV.

Anyway, here we’re driving the ë-C4, which brings with it a 50kWh battery beneath the floor and a power transfer kit under the bonnet and is front-wheel drive. On the WLTP test cycle, that gives it a range of 217 miles. Avoid starting with a cold battery or doing a lot of high-speed miles if you want to get anywhere near that, as per usual. And it has a maximum charging rate of 100kW. 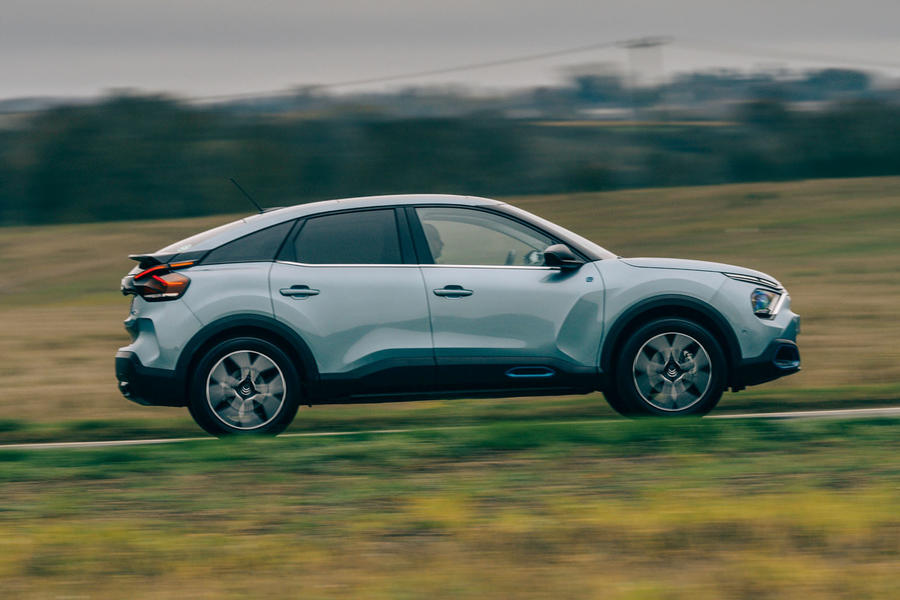 To drive, the ë-C4 is very much an EV with some Citroën feel. You sit in a position not unlike that in the Berlingo: not tall-tall but a little tall. There are two pedals and a small, simple gear selector plus the option of a B mode, which gives greater lift-off deceleration but doesn’t allow for one-pedal driving; there’s always creep at low speeds, like in an auto.

Those fairly generous sidewalls plus the rolling comfort that Citroën says it’s aiming to put into its cars, rather unashamedly and endearingly, mean the ë-C4 rides relatively gently, but with a little head-toss and cabin shake too, so it hasn’t been totally unsuccessful.

The steering is light, short on involvement and feel, as is the rest of the drive. This isn’t really a driver’s car for the likes of you and me. It gathers, retains and loses speed well enough, though. It has 134bhp and a claimed 0-62mph time of 9.0sec, but step-off always feels brisker than that, and there’s very little torque steer to speak of too.

There are three trim level options, each around £1000 apart. The ë-C4 seen here is the middle Shine, which is well-equipped. The government’s £3000 grant for EVs leaves it just over £30,000, so in the same realm as the Nissan Leaf and Volkswagen ID 3. 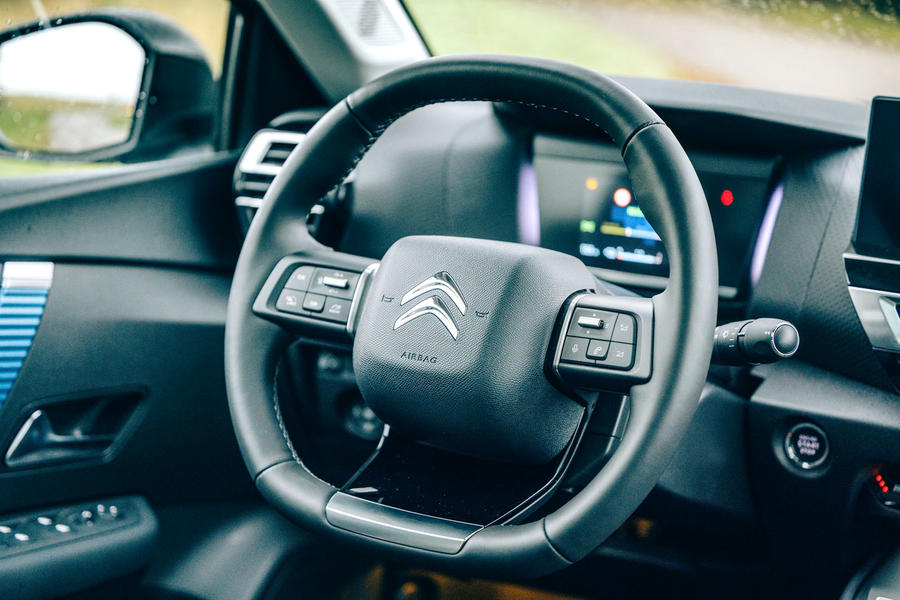 In terms of interestingness, the ë-C4 is probably halfway between those two in terms of both looking at and sitting in it. And with a 50kWh battery, it should go further between charges than their base variants, but it’s not quite as nice to drive as either.

Ultimately, though, not unlikeable. 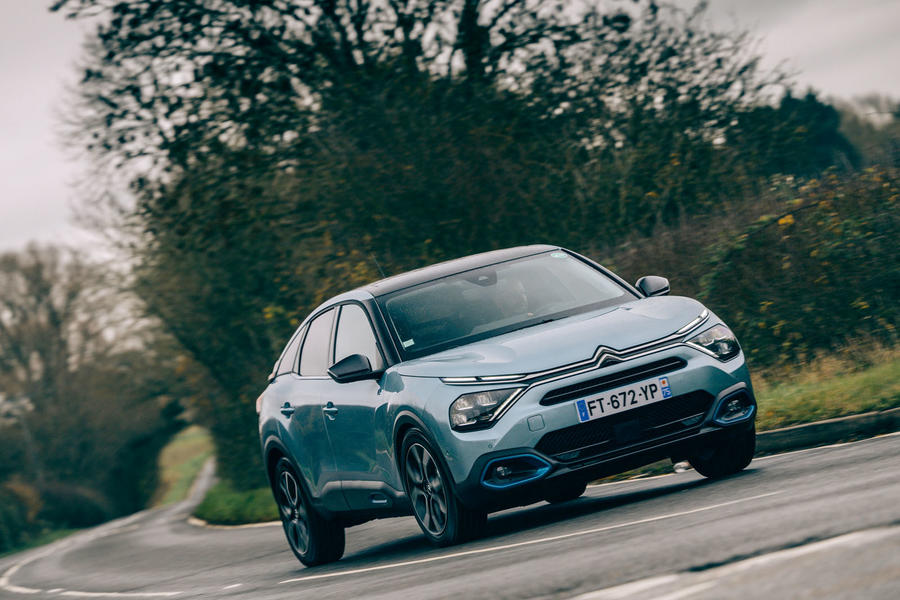 Typical autocrap review. Sorry I don't need a car that is uncomfortable and needs a race circuit to enjoy. Get real, a car like this is a domestic appliance and you hate having to do a job you are half heartedly doing. All you want to do is sit in and drive expensive toys and pretend you are some 2nd rate racing drivers. Thank god for library apps rather than buying comics such as this rag. You can't even be bothered to root out the spam all these comments sections seem to gather.

I rather like this. It isn't pretty, but it is very different to the alternatives. I like that Citreon are doing their own thing, and being a little off beat again. I hope this is a success for them.

As a silhouette it looks ok, but the detail is just awful - a pretentious melange of mismatched shapes and angles that lacks any cohesiveness or beauty.

Yep, I know where the current Honda Civic designer went after he was fired.