8
We get behind the wheel of the 2018 iteration of the Chevrolet Camaro ZL1, and it's impressive – making it all the more depressing that it won't be made available for the UK market
Open gallery
Close

The ultimate pony car, for now at least. The Camaro ZL1 combines the supercharged 6.2-litre V8 from the Corvette ZR1 with the marginally increased practicality of its cramped four-seat cabin. It’s also sold at a substantial discount, $62,500 for the regular ZL1, and $71,300 for the more track-focussed ZL1 1LE.

With 641bhp the mighty V8 outguns the current top-spec Mustang GT350 by 115bhp, but the more important statistic for GM’s engineers is the 7:16 Nordschlieffe time a 1LE posted in 2017. Not only is it massively cheaper than any other car to have posted comparable performance, it also achieved that time with a manual gearbox.

A 10-speed autobox is also available, and we drove both a ZL1 auto and a ZL1 1LE manual on the roads of Michigan. Both feature styling that turns the aggression of the standard Camaro to something close to a steroid rage, with a huge front splitter and the bonnet’s power bulge finished in raw carbon fibre. The 1LE adds extra winglets and aerovanes, plus a huge rear wing; it also gets user adjustable track suspension as standard. 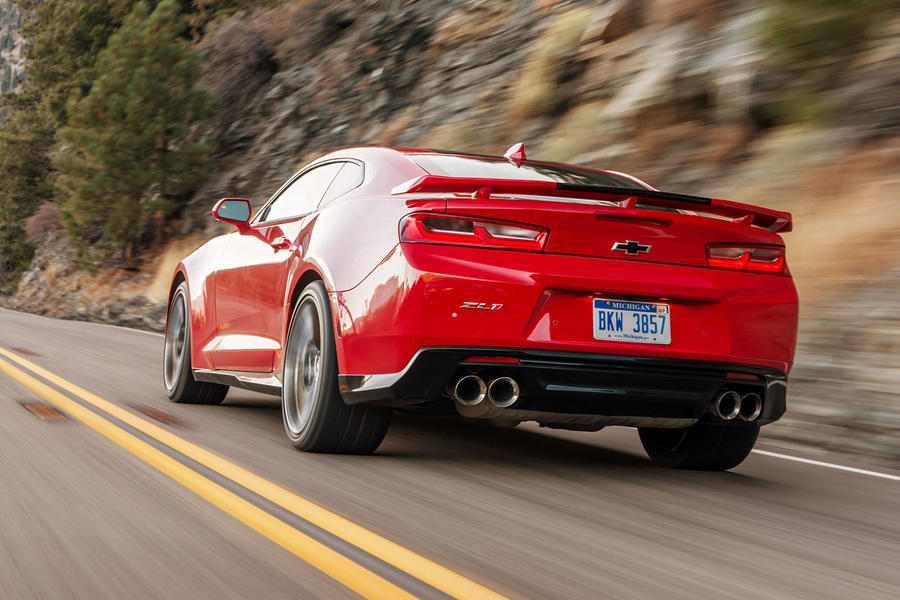 Fast enough to stretch your adjectives, yet also impressively usable for something so brutal. The V8 delivers huge urge whenever you want it, the supercharger starting to blow hard from around 2500rpm and overlaying the already brawny low-rev soundtrack with a whine reminiscent of a Mad Max film. It pulls harder and harder to the 6500rpm limiter, with the top end savagery that means throttle-pinning opportunities in normal use will be few and far between. It leaves no doubt of its ability to match GM’s claimed 3.5-second 0-60mph time, with U.S. magazines having run quarter miles in under 11 seconds.

Yet it’s far from being the sort of crude muscle car that can only deal with straight lines. I didn’t drive it on a track, but the regular ZL1 coped well with some of Michigan’s rough and heavily cambered backroads, the chassis finding serious grip and impressive traction for a fair percentage of those horses. The handling balance is predictably rear-led, even with the stability control fully on the rear end tenses and sometimes squirms under load. But it’s not wayward and gives the Camaro a sense of excitement even at a scant percentage of its potential. The ride is predictably firm, even with the adaptive dampers in their softest “Tour” setting, but the ZL1 remains impressively compliant for something so hardcore.

The steering rivals the engine as the Camaro's star feature. The fat Alcantara-trimmed wheel feels heavy, but every bump and contour of the road is passed through it outstandingly, and the ZL1 can be placed with an accuracy that belies the savagery of its performance.

The ZL1 1LE is much more hardcore and, away from its natural track habitat, much more of a handful. The track-biased suspension loses the compliance of the regular ZL1, even in what is supposed to be its road settings thanks to motorsport grade spool valve dampers which deliver every bump into the cabin unfiltered. It will be truly mighty on a circuit, but on normal roads I preferred the better compromise of the standard car.

The 1LE’s manual gearbox also illustrated the key dilemma facing ZL1 buyers – which gearbox to choose. The manual is one of the best out there, with a nicely weighted action and mechanical precision that makes it a tactile delight, but it undoubtedly carries a speed penalty over the optional auto. Under gentle use the 10-speed torque converter box does a stellar job of taming the supercharged engine’s power delivery, although at the cost of constantly shuffling between its many ratios. But adding pace transforms the gearbox’s character, delivering shifts with a twin-clutch rivalling snap and – in the punchier Sport and Track modes – cutting fuel on upshifts to give a satisfying exhaust pop. It’s good enough to have even dedicated fans of clutch pedals wondering whether to keep the manual faith, especially as the V8’s heavy flywheel makes it hard to rev-match on downshifts with the six-speed ‘box without activating the throttle-blipping system. 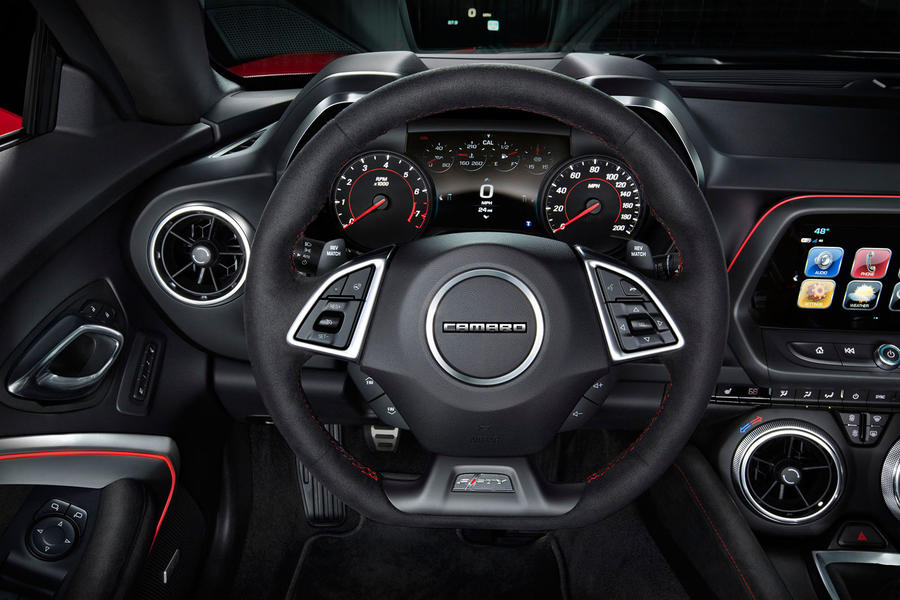 If you’re reading this from the United States, or one of the few other chosen territories where GM sells the ZL1, then the answer is “yes, immediately” – then gloat about your ability to enjoy what is – on a dollar per horsepower basis – probably the world’s outstanding performance bargain.

Sadly for the rest of us the only option will be through the trouble and expense of grey importing. It is still possible to buy both the 2.0-litre turbo and V8 versions of the Camaro through the UK’s sole official dealer – Ian Allen in Surrey – albeit in left-hand drive form, and for substantially more than a straight translation of their U.S. prices. But the ZL1 will remain unobtainium, the sweetest and juiciest of forbidden fruit. 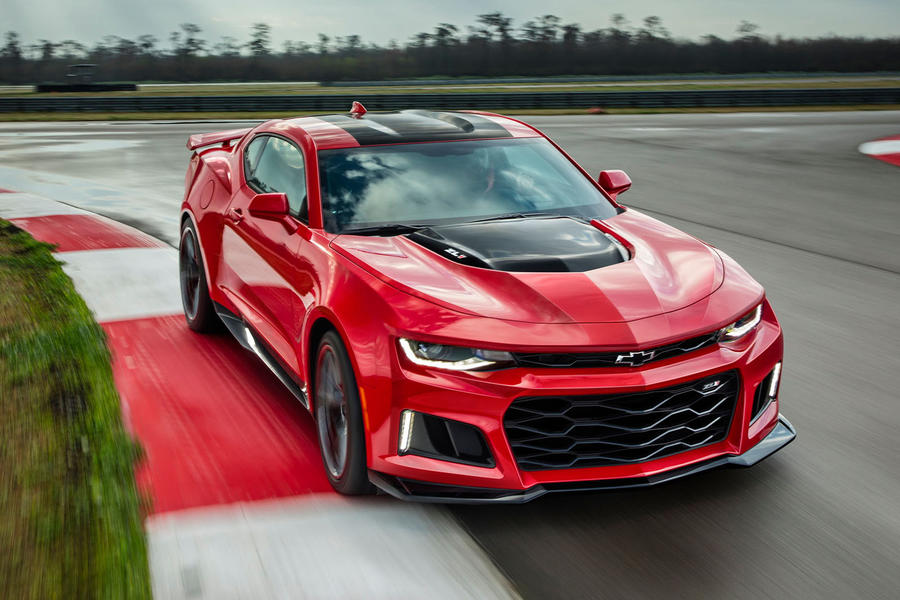 "The ultimate pony car, for

"The ultimate pony car, for now at least."

Surely the Dodge Challenger Hellcat is the elephant in the room?

Has the Camaro been engineered for RHD? if not what are Holden going to do for a performance car when supplies of the new Commodore (aka Insignia) run out due to the PSA takeover of Opel. Surely they're not going to roll over to give Ford Australia a free run in the performance car market with the Mustang?

if you have a LHD in the UK, and it’s got three four hundred horse power you could adopt the Police pursuit method...?, which is......move out completely onto the wrong side if clear bury the throttle and go....!