If you’re currently staring out of your window at the blue skies and sunshine, itching to slide behind the wheel and go for a blast, we can help.

Instead of jumping on your favourite online shopping portal and ordering yourself something from Airfix, Lego or Tamiya as a temporary distraction, why not pick up the ultimate lockdown construction kit of them all: the new Caterham Super Seven 1600.

Indeed, you can still get Caterham to deliver an entire car in component form and with the right tools (handily available for £375 from Caterham), it’ll take around 80-100 hours to put together. Alternatively, those less au fait with the innards of a toolbox can spend another £2395 to get it built for them and delivered to their local dealer fully registered and ready to use on the road.

What exactly is a Super Seven? Following on from the raging success of the limited-run three-cylinder Sprint and Supersprint, this is another retro-themed Seven. This time the four-cylinder 270 is the base model, but you’ll find traditional flared front wings instead of wheel-hugging cycle-style items, a spare wheel on the back to highlight the fact that this is a retro-tourer rather than a modern racer, and a pair of K&N filters to enhance the induction bark from the twin-throttle bodies.

That retro-tourer feeling is cemented inside by leather seats (black as standard, with other shades available at a cost) and the option of a tiny, thin-rimmed wooden Moto-Lita steering wheel. You even get a choice of two chassis sizes: the original or an SV version that’s longer and wider to give larger individuals a bit more room.

Despite the Super Seven piling on a few pounds over the regular Seven 270, the tweaked 1.6-litre Ford Sigma engine can still propel the car from a standstill to 60mph in 5.0sec, even though its naturally aspirated status means it delivers a mere 135bhp at a heady 6800rpm. Compared with the rather breathless Suzuki turbo triple found in the Sprint, it’s also a far more enjoyable engine to interact with. 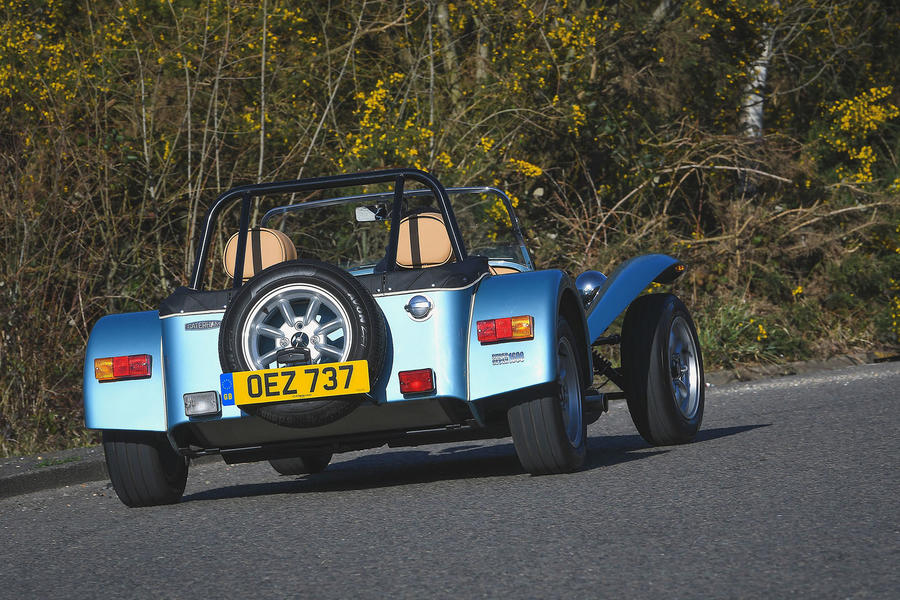 It certainly fits right in with the retro experience, with the Twin 40s throttle bodies under the bonnet giving a fluffy, carburettor-fed engine response as you roll onto the throttle at low engine speeds. Drop a cog on the short-throw – and deliciously mechanical-feeling – five-speed gearbox and the motor clears its throat and picks up cleanly, delivering an induction roar to die for in the process as it spins freely to the limiter.

With no power assistance for the steering, or indeed the brakes, you need to be prepared to put the effort in to get the rewards. But what rewards they are: the super-fast steering is continuously sending little messages about the road’s surface to your palms and tells you everything about the front tyres’ grip in corners. Few sports cars, in any class and at any price, are this talkative.

Naturally, the Super Seven requires more effort than something like an Alpine A110. Its heavy steering makes low-speed manoeuvring a real chore, although it requires only a bearable amount of muscle at higher speeds. As for the brakes, they don’t require a great deal of pressure to slow the car in a normal fashion, but they need a hard squeeze before they really show what they’re capable of.

Unlike the A110, Mazda MX-5 and pretty much every other new car, there’s no anti-lock braking system and no traction or stability control. Not that you should be too nervous: on a dry day at least, the tall, narrow tyres find a surprising amount of grip and need to be pushed hard before they relinquish it. Even when you do give the accelerator pedal a bit too much of a squeeze, slides are so well telegraphed and easily caught that they’re something to be enjoyed rather than feared.

Unsurprisingly, there’s not much in the way of body lean, and although the suspension has little travel, it’s just about supple enough for battered British B-roads. With such a low weight, the Super Seven changes direction with an immediacy that’s almost impossible to find in other cars.

As for refinement, it’s exactly as you’d expect it to be. Although you sit low, the wind whips around your head even with the optional side screens installed. Add the optional roof and you’ll still feel plenty of little breezes as air enters through gaps in the fabric, and there’s still tonnes of wind noise. You’ve also got the engine screaming away when you’re doing 70mph and a bit of tyre roar, too. In other words, buy earplugs and forget in-car conversations when you’re travelling at high speeds. An MX-5 is a much more relaxing long-distance companion.

As we’ve mentioned, you can have your Super Seven in a couple of different sizes. However, not even the larger, more practical SV variant tested here could be described as large or practical inside. For a start, you’ve got to manoeuvre yourself into the car, something that’s fairly straightforward with the roof off but nearly impossible with it on, unless you’re especially short.

Even with the SV variant, it would be an understatement to call the Seven’s interior cosy. This feels like a tiny, narrow car, although at least the seat can go back a long way and you don’t feel too hemmed in at the sides. In fact, shorter drivers might find the seat doesn’t go far enough forwards, while the seat adjustment itself requires plenty of brute force.

And while the optional beige leather trim (around £2000 extra and fitted to our test car) looks great, there’s no hiding how basic the interior is. After all, this is a car without instrument stalks, using a toggle switch for indicators and a row of switches for lights, wipers and everything else that probably could have come from the 1970s.

With no storage space up front, there’s only a small, vinyl-covered luggage area behind the seats that’s accessed by unpopping some press studs. There’s enough room for a squishy bag or two in there, but the roof takes up much of this space when it’s folded. Yes, you’ve guessed it: the A110 and MX-5 have bigger, more secure boots, and both have modern infotainment systems. The Super Seven doesn’t even get a radio. 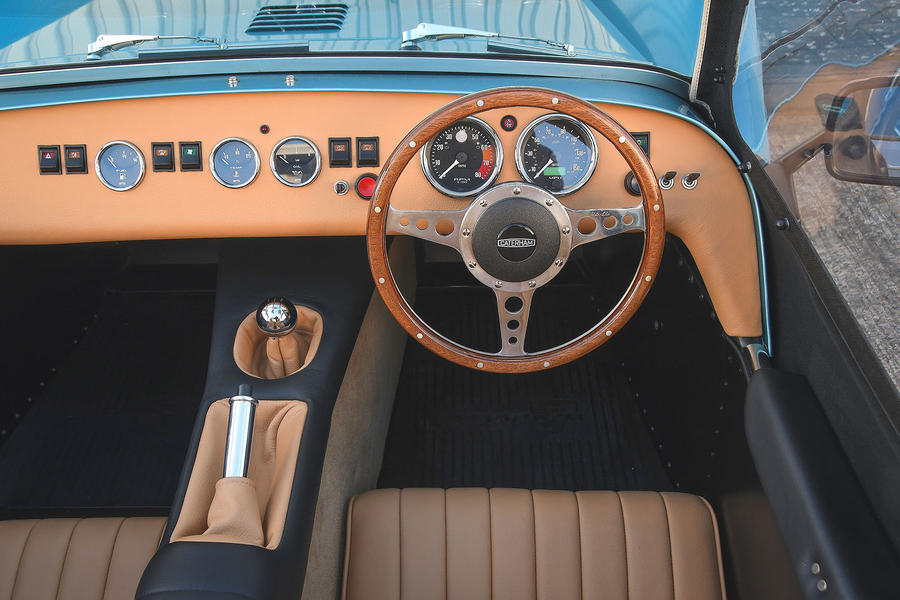 There’s no sensible reason for buying a Caterham, be it a Super Seven or a more modern-looking version. Even by sports car standards, it’s loud and impractical, and then there’s the safety. There’s nothing but your own skill to prevent you from getting into trouble and then very little to protect you should there be an accident.

No, this is a car you buy for the way it drives and the way it makes you feel – a car that you go into with your eyes wide open, knowing all the pitfalls, foibles and sacrifices. For the vast majority, Mazda’s MX-5 instead will be a better fit. It’s not as fast or as raw, but it’s cheaper and hugely entertaining to drive, plus it comes with the creature comforts and safety standards that we’ve come to expect.

But, for diehard driving enthusiasts who are looking to burst their bubble and properly interact with the machine under them, the Caterham Super Seven is an intoxicating – if expensive – device that rewards like few others can. 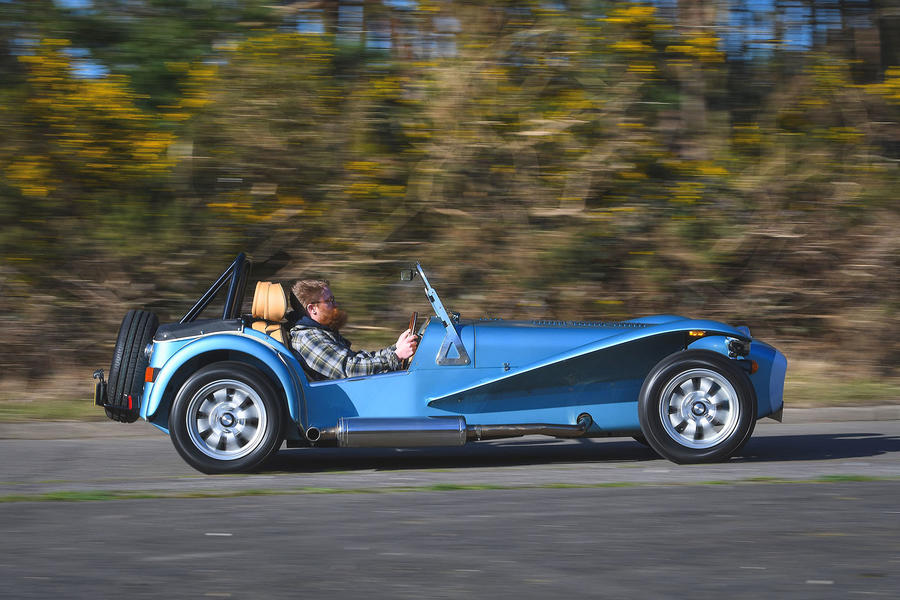 Yep £40K is a bit silly. I get the purity and simplicity, and that does work with a high-price when you go down the performance route (600R etc) but this should be 30K tops.

I suppose this would be much more sought after below 30K, 40K is simply insane for such a basic car

i just don't get it

it's twice the price that the 160 was, more expensive than better specced caterhams are, and those front wings are really draggy and lifty. i can't work out why someone would choose it. Is it really too hard to get a daihatsu copen or honda s660 engine to fit the type 9 gearbox? if they made the 160 again - but did it properly this time - i'm convinced they'd sell plenty of them