From £90,8308
Performance SUV-coupé gets a fresh face, but the bigger changes are to be found underneath
Open gallery
Close

It is only two years since BMW launched the X4 M Competition as a rival to the likes of the Alfa Romeo Stelvio Quadrifoglio, Porsche Macan GTS and Mercedes-AMG GLC 63 Coupé. Yet it's already ringing the changes on the rapid performance SUV – and in a sign of the strength of the high riding competition, they’re more significant than what we’re used to seeing from BMW at mid-life facelift time.

BMW claims the new front bumper brings a reduction in high-speed lift together with improvements in both engine and front brake cooling efficiency. The styling changes also help to visually differentiate the X4 M further from the standard second-generation BMW X4, which has been given its own, altogether milder, styling update.

The changes at the rear aren’t quite as striking: there's more heavily structured LED tail-light lenses with altered graphics, a new high-gloss black spoiler lip and a restyled bumper featuring a new-look lower section housing a redesigned diffuser that's flanked by a pair of round tailpipes either side.

The reworked M car also receives a fresh range of alloy wheels, including new 21in M Competition items that are claimed to bring a 2kg reduction in weight at each corner.

Under the bonnet is a reworked version of BMW M’s S58 engine. The twin-turbocharged 3.0-litre straight six has adopted a new forged crankshaft and revised software among other detailed changes. Power remains the same as before, at 503bhp, but peak torque has been increased by 37lbft to 479lb ft between 2750rpm and 5500rpm.

Drive is channelled through a recalibrated eight-speed torque-converter automatic gearbox with steering wheel-mounted shift paddles and BMW M’s fully variable xDrive four-wheel drive system, which is shared with the M3, M4 and M5.

There's a bewildering number of driving modes available via the standard Drivelogic function. They allow the driver to alter the characteristics of the engine, gearbox, xDrive system, suspension, steering and DSC (dynamic stability control) independently of one another.

The double-wishbone and multi-link suspension that underpins the X4 M has been retuned as part of efforts to answer criticism of its harsh ride. Changes to the so-called Adaptive M set-up include revised adaptive dampers that are aimed at providing greater levels of compliance in both Comfort and Sport modes. Our test car rode on 245/45 R20 front and 275/40 R20 Pirelli P Zero tyres, one of a number of choices offered to customers. 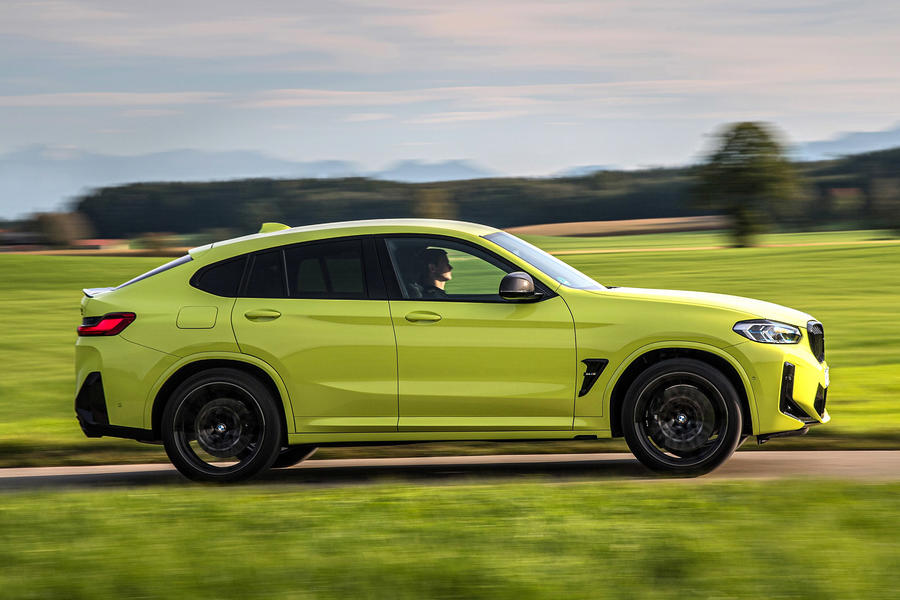 Step up into the facelifted X4 M and you discover a number of detailed changes. Most noticeable of all is the new 12.3in BMW Live Cockpit Professional digital display. This replaces the analogue instruments of the previous model, bringing with it M digital graphics.

The centrally mounted 12.3in Infotainment touchscreen also receives BMW’s latest iDrive operating system with new menus, cloud-based sat-nav and over-the-air software-update functionality. You can also specify a new head-up display with M-specific graphics, as seen on our test car, as an option.

The multifunction sports steering wheel (with red M1 and M2 buttons) and body hugging sports seats (with illuminated M logos) are brought over from the old model, but there's a new centre console, similar to that seen in the latest M3 and M4. It houses a shorter gear selector, a new iDrive rotary controller, new controls to provide direct access to the Drivelogic functions and a red start button.

The central vents and air conditioning controls have also been revised in look and operation, while a Harman Kardon sound system now comes as standard.

It's a very agreeable driving environment with a higher level of perceived quality than with the old X4 M.

Accommodation isn’t exactly generous, especially in the rear, which is compromised by the plunging roofline and space-robbing transmission tunnel running back through the cabin. But with a nominal 525 litres of luggage space, extendable to 1430 litres when the 40:20:40-split fold rear seats are stowed), the new model does offer reasonable versatility.

We tested the new X4 M on roads around BMW M’s headquarters in Munich, Germany. Predictably, its revised engine – the same unit found in the M3 and M4, no less – continues to steal the show, with marvellously muscular and linear properties. The sheer response and overall flexibility makes for a high degree of drivability, even in Efficiency mode around town.

Switch into Sport Plus on more open roads and the twin-turbocharged six-cylinder delivers huge mid-range shove as it spins with great zeal up to the 7200rpm redline on a loaded throttle. It's terrifically determined and, with a fully variable exhaust flap, it sounds the business when worked hard.

The resulting performance really is quite something, providing the 2010kg X4 M with a 0-62mph time of just 3.8sec. This is 0.3sec inside the time quoted for its predecessor, making it the fastest-accelerating SUV model from BMW M yet.

The eight-speed gearbox, meanwhile, accommodates the X4 M's increased torque terrifically well, with generally smooth and fact acting qualities. It's all backed up by outstanding traction from the M xDrive four-wheel drive system and its integral M Active Differential.

Rapid? You bet. But what will impress prospective buyers even more is the overall precision and agility. The X4 M Competition delivers a great sense of control and confidence-inspiring dynamic qualities. There's a good deal more heft to the steering than you find in standard X4 models, along with tauter body control, outstanding grip and, when the conditions allow, the sort of cornering adjustability offered by the very best M cars.

The problem, at least in everyday driving, is its firm ride. BMW’s efforts at introducing greater compliancy into the suspension have improved impact harshness to some extent and there's less annoying tyre roar than before. Still, it remains unforgiving with a fidgety feel and quite a lot of high-frequency vertical movement at lower speeds around town. It improves a bit once you’ve progressed to typical motorway speeds, but the inherent firmness and general lack of ride refinement remain. 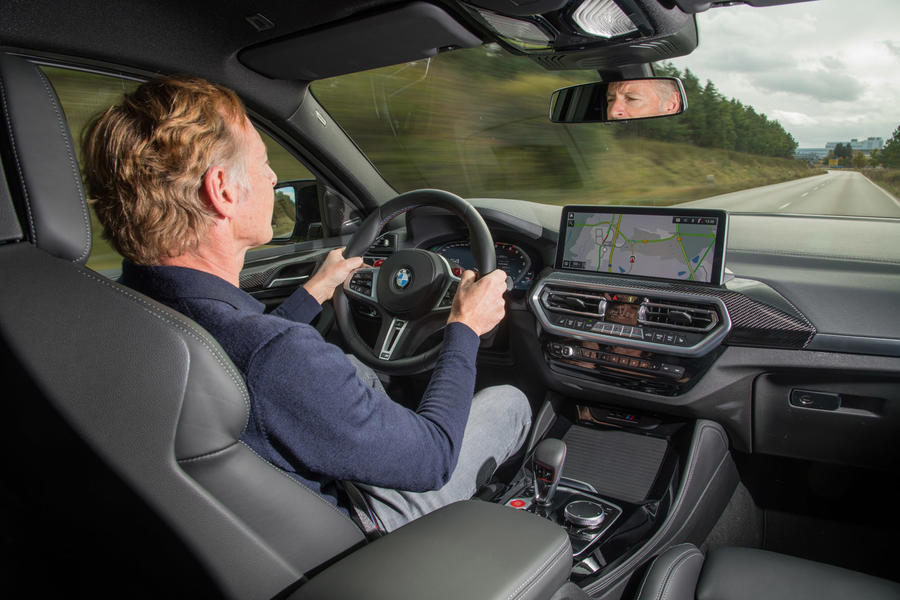 Be in no doubt: the £86,860 facelifted X4 M is a serious driver’s car. It drives much like you would expect a high-riding M4 to, with great response, wonderfully accessible performance, engaging precision and confidence-building control.

It reflects a high degree of technical prowess, delivers a devastating turn of speed and is hugely compelling in the right conditions. But it continues to lack for overall ride refinement and ultimately fails to offer the sort of interior space delivered by some performance SUV rivals. 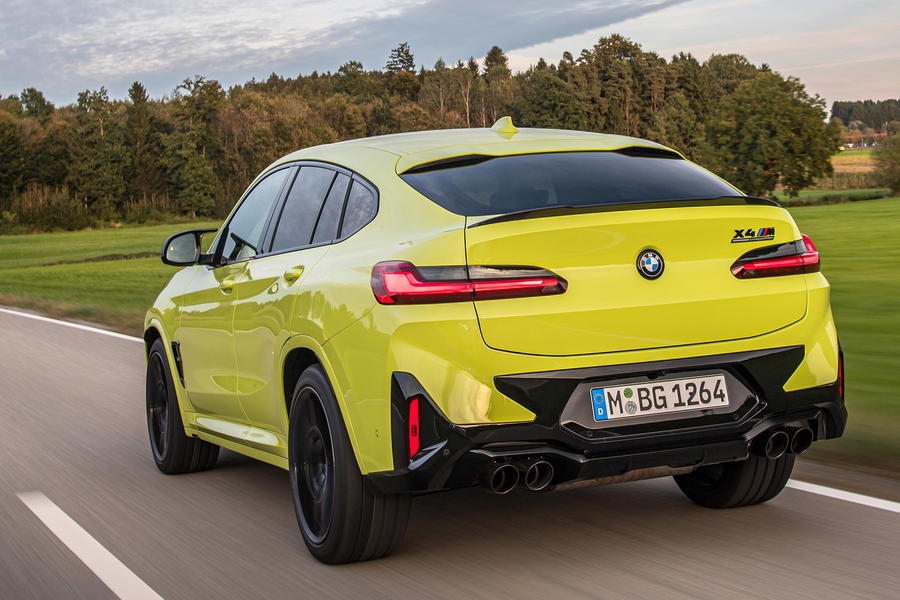 Imagine if we liked all the Cars, but we can't, how boring would that be?, a BMW might not be your choice , but it's someone else's,and they are happy with, just like you would be with yours.

I long for the day when these hideous automotive high-heeled sneakers cease to be a fad.