This is the other new M Division performance SUV – except that BMW prefers to describe the X4 M Competition as a ‘sports activity coupé’. In this case, that means it retains a five-seat interior but has a plunging roofline that trades passenger space for perceived exterior style and gives up a little bit of boot volume to the equivalent X3 M Competition.

The X4 M uses the same brand new turbocharged 3.0-litre six-cylinder engine as the X3 M and has a near-identical drivetrain and suspension specification but for a slightly wider rear track. It's marginally lower and longer in the rear overhang than the X3 M, but it has the same claimed kerb weight and performance.

BMW UK will charge a premium of just under £3000 for the X4 M, with the only material differences between it and the X3 M, aside from the ones we’ve already covered, concerning colour and optional equipment. You can add a load retention net for the boot, backrest angle adjustment for the rear seats and rear sunblinds on the X3 M but not here, however. 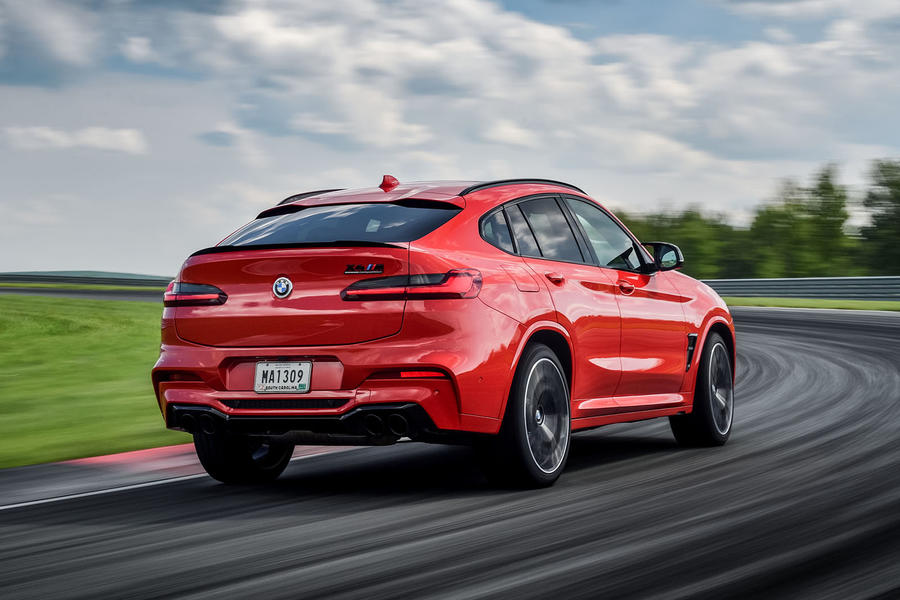 On the basis of what back-to-back testing was possible on the international press launch, the X4 M is all but indistinguishable to drive from the X3 M. As you may have already read, that means a strong, super-flexible straight six, a usefully configurable four-wheel drive system and impressively taut, precise and even slightly throttle-adjustable handling are all strong selling points. Meanwhile, a noisy, fidgety ride over rougher roads, a shortage of the dynamic versatility you get from rival fast SUVs and a certain reservedness of character compared with some opponents are there to be seized upon by critics.

The interior of the X4 M remains inviting, luxurious and decently practical, even though it’s not quite as spacious as the X3 M. Adults can sit comfortably in the back row provided they’re no taller than 6ft, and long-distance touring comfort is good thanks to sports seats that are discreetly supportive but still soft and easy to berth in and out of. In that respect, the car certainly offers better occupant space than the Porsche Macan and a very similar amount to the Mercedes-AMG GLC Coupé.

Like the X3 M, the X4 M has BMW’s last-generation iDrive multimedia system and digital instruments, the latter being more readable than the newer set-up you’ll find in the new 3 Series. BMW’s palette of materials, meanwhile, includes a two-tone orange-on-grey-leather option that's smart and would look like it belonged in any modern M car.

The new-generation engine seems more akin to a laser scalpel than the lump-hammer you’ll find in some rivals, but it seldom fails to make the X4 M a fast car, either on road or track. It doesn’t gush with vocal charisma like an AMG V8 or Alfa Romeo V6, but it has plenty to be going on with. It feels very responsive under your foot and about as smooth, flexible and linear in its power delivery as any turbocharged engine of its kind.

It’s an engine to be admired in gear, under load and in use, in other words, at both middling and high revs, rather than when burbling away at a halt or cracking affectedly on the overrun. And you interact with it through an eight-speed torque converter automatic gearbox that’s good enough to seem like an improvement on BMW M’s old seven-speed dual-clutch unit in almost every way that matters.

The X4 M's ride and handling can be tailored and adapted a little bit using the familiar mode selector buttons for steering, adaptive damping and engine calibration – although not as widely or as effectively, it must be said, as some fast SUVs allow. If you're anything like us, you’ll spend most of the miles with the suspension and steering dialed down and the powertrain dialed up. That’s because the ride is a bit short, tetchy and given to thumping even with the dampers in Comfort mode, while the variable-ratio steering picks up a bit too much weight and pace in its more aggressive settings to feel either fluent or intuitive.

The X4 M doesn’t quite have the sense of compactness and agility necessary to make it easy to thread quickly down a narrow country road, but it flows well enough along smoother, wider ones and feels flat, taut and controlled in its bigger body movements, with an assured and commanding level of grip.

To drive it to the limit of grip on a circuit is to take it to a place that most owners almost certainly won’t, but when you do, you’ll discover that the car’s body control survives well. It only begins to run out of composure under extremes of lateral load and in its firmer damping modes, when it can begin to hop on its outside rear wheel and feel slightly untidy and unforgiving if you seek to adjust the car's attitude.

Keep the X4 M in its comfort zone, however, just below the limit of grip, and it handles like a modern BMW M car should: with unerring precision, plenty of grip and useful feedback. It's capable of putting on speed urgently, shedding it powerfully and robustly and always really involving its driver. 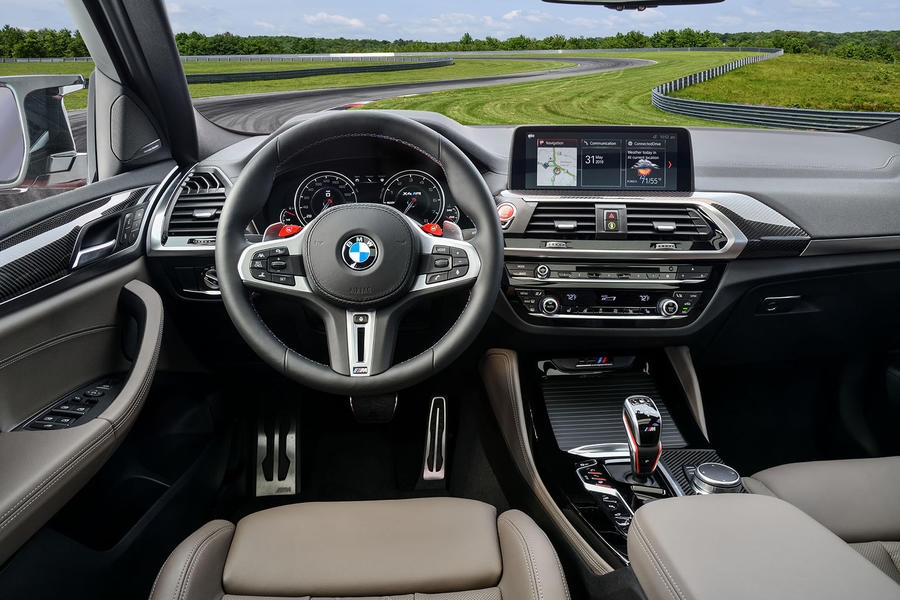 Like the X3 M, the X4 M is an effective but unusually serious and uncompromising driver’s car by fast SUV norms. That means it doesn’t have the breadth of ability of, say, the Jaguar F-Pace SVR or Macan and probably doesn’t do quite as much to extend the reach of the M Division model range to people who want a semi-luxurious everyday family car as some might expect.

The relative practicality limitations of the X4’s body design also erodes that sense of overarching convenience and usability a bit, and it’s questionable whether the added exterior style and desirability you get in return for giving that up is worth the trade.

If you feel differently, though, and you like what you see in this car, there’s every chance that you’ll enjoy the sporting driving experience you find at the X4 M's steering wheel. Neither four-wheel drive nor a high-rising body profile prevent it from feeling like a proper M car. 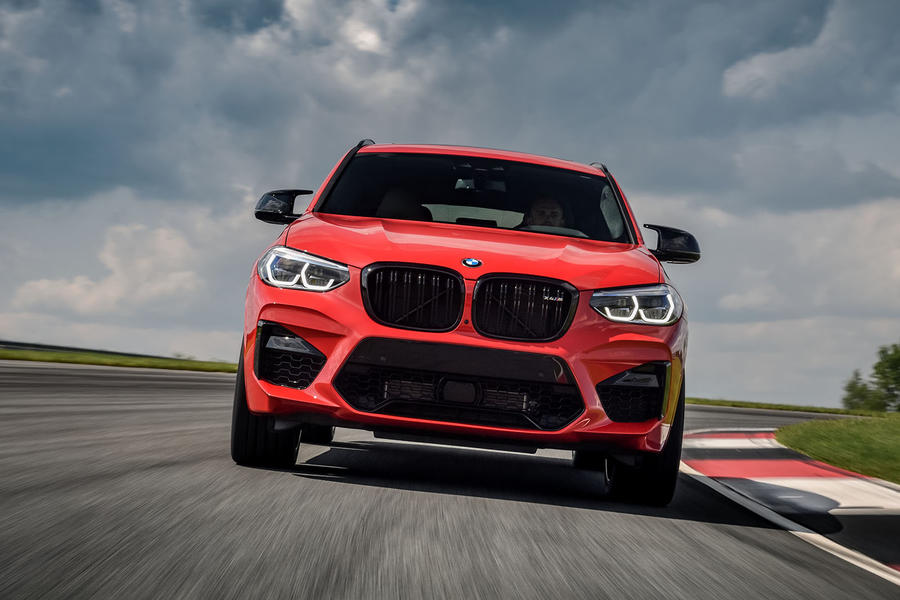 In all that is holy, this answers another question asked by no-one, anywhere

If I was being kind I'd call the front bland, but the rear is on a different level. Simply hideous.

Why is this a separate review?

It's the same car yet even worse.
View all comments (5)