BMW has never made a Clubsport version of its long-lived M5 super-saloon before. This first one is a car with a walloping 626bhp, a £140,000 price tag, and a 0-62mph claim of 3.0sec flat. It’s nothing less than the most potent road car that the M Division has yet built.

But, contrary to my expectations at least, it also feels important; like a turning point for the M5, rather than just some cynical exercise in limited-numbers ego massage for the chosen few. With this car, BMW has gently corrected the development course of the F90-series M5 and addressed (rather effectively, as we will come on to explain, but also for quite a price) its various dynamic shortcomings.

The F90 M5 made a memorable first impression when it was introduced to UK roads back in 2018. The standard 591bhp version had an outright handling agility that you rarely find in a car of its size, and the versatility of its clever four-wheel drive system gave it remarkable adaptability, too.

But it didn’t arrive on the market perfectly formed. Its tetchily firm and insistent ride and its slightly fuzzy-feeling electromechanical steering and by-wire braking systems both left room for improvement of the sort that tends to be wrought upon performance cars like this as they're lead through so many special editions and model-year revisions.

When the 616bhp M5 Competition arrived in 2019, though, with its even stiffer suspension and tweaked running gear, it only obfuscated what we had seen (and liked) in the original version.

The 2020 facelifted M5 Competition (by that time the only M5 that UK customers could buy) began to redress the car’s dynamic balance towards pragmatic real-road suitability, but only little by little. 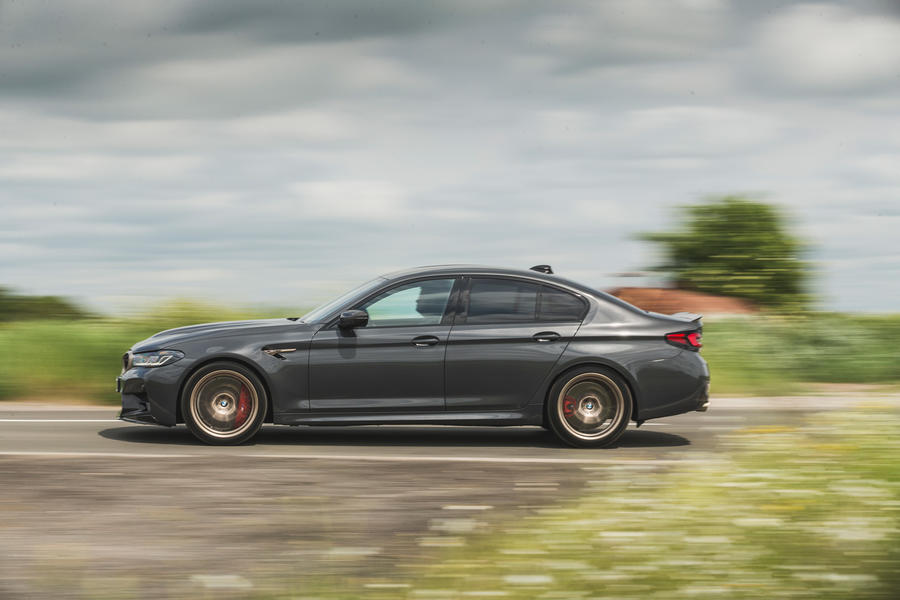 Well, praise be: the M5 now feels very much like a fast four-door whose development is heading in the right direction. Credit to Munich, then, for realising where the most worthwhile dynamic gains for this heavyweight bruiser might really be made - and for resisting the temptation to add attention-grabbing power or to dial in extra track performance, neither of which M5 owners would have much use for.

The M5 CS isn't a four-door executive saloon that thinks it’s a Porsche 911 GT3 RS. It doesn't have a roll cage that makes its back doors, back seats and about a quarter of its overall length almost entirely redundant. It is, in fact, just a better super-saloon, and still a very usable one.

It has only 10bhp more than the M5 Competition and the same outright torque output, but it has been made to weigh a little bit less than it used to and, more importantly, to ride, handle, steer, sound and communicate quite a lot better also.

The car's weight-saving is worth 70kg overall, and it comes partly from a smattering of new body panels in carbonfibre-reinforced polymer. Forged 20in alloy wheels contribute too, as do standard-fit carbon-ceramic brakes (both of which represent big savings of unsprung mass). Carbon-backed lightweight sports seats are standard. And so the M5 CS weighs 1825kg in running order, which is actually within 75kg of Jaguar’s much smaller, track-ready XE SV Project 8.

The M5 CS's power gain comes from revised induction and fuel injection systems for its 4.4-litre V8 (the former getting a new indirect charge air intercooler and revised turbochargers and the latter running at higher pressure) and a new active exhaust. It makes peak torque over a greater band of revs than the regular M5 Competition. It revs to the far side of 7000rpm really freely, but it also seems to respond to mid-range requests with less of a wave of boost and with less elasticity of feel under your right foot than other F90 M5s have thus far. It has a really potent but also now a notably sharper-feeling power delivery.

This car is monstrously fast; any more grunt would, as BMW correctly concluded, have felt totally absurd. But, to these ears, its V8 also sounds more genuine than any F90 M5's has hitherto. There’s more natural exhaust roar from behind you under a wide-open throttle when you’re in the sportier driving modes; a bit more induction hiss from up front, too; and less digital ‘vroom’ noise coming from the audio speakers. 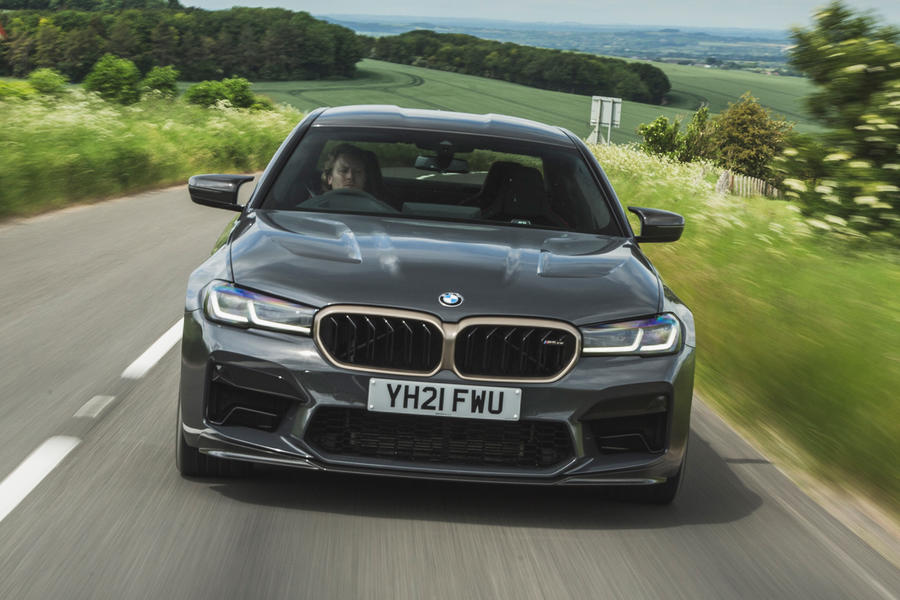 BMW has reworked the M5’s suspension pretty widely, adopting the dampers developed for the 2020 M8 Gran Coupé, which lower the car’s ride height by 7mm, and then picking new spring and anti-roll bar rates to match. It has also stiffened the engine mounts significantly, which has the effect of stiffening up the whole of the frontal structure.

What a difference that makes. Despite having less apparent wheel travel within its arches, the M5 CS rides twice as well as the M5 Competition. Comfort damping mode conjures up plenty of outright compliance and also a fluent, stable fast B-road ride that banishes the memory of the often fussy, reactive, camber-sensitive feel of the regular M5’s ride. On smoother surfaces, Sport damping makes the M5 CS tauter and a shade more composed over long-wave inputs; but even here, vertical body control never feels overbearing.

The steering shows a matching improvement. It has none of the muted, slightly rubbery feel of the regular M5’s rack and, on the Michelin Pilot Sport 4S tyres of our test car, even filters a useful amount of contact patch feel back to the driver where the old rack managed so little.

And so, with a front-end so much more tactile and feelsome than the regular M5’s and a rear axle that feels so much better-connected to the road, the M5 CS is a significantly more effective driver’s car than its lesser relations. It shines a real spotlight on the predictability and feel that have been missing from the F90 M5’s dynamic recipe thus far.

It has the same versatility and adaptability of the regular M5, but it’s capable of greater driver reward when you simplify its character, disengage its front driveshafts and start feeling for its limits. Those limits are high but not unbreachable on the road; and so the car can be really interactive and playful at road speeds, which is the last thing that you might expect a modern BMW Clubsport model to be. It’s not hardcore, but it is tactile and special; not particularly overblown or misguided and all about qualitative improvements to the driving experience rather than objectively measurable, quantitative ones.

What’s more, when you get used to negotiating the car's driving modes using the M1 and M2 quickfire shortcut buttons on the steering wheel (rather than by individually tweaking a suspension setting here or a steering mode there), you feel like you can get more out of the car as the road ahead of you changes. In this respect, the M5 CS isn’t any different from the M5 Competition or even an M3 or M4. But the way that BMW has learned to make the complexity of the driver-configurable systems in these cars so manageable of late really is impressive. For us, it’s beginning to lift the appeal of the cars above their rivals by a clear margin all on its own.

Saving your own preset configurations of engine, drivetrain, suspension, steering and stability control setting is just so easy. Tweak a couple of systems, press and hold your thumb on one or other of the orange toggle buttons mounted on the spokes of the steering hub and your selected mode is locked in. You don’t fall victim to that looming frustration that you preferred the setting you had before but can’t quite find it again.

The new BMW M Division way of managing all this feels like cooking with micro scales and an oven thermometer for the first time. And then, once you’ve developed and refined the combinations you like best, you can flick between them instantly and so easily, like a teenager switching weapons on a PlayStation first-person-shooter. That sounds very much like 21st-century digital entertainment, I realise; but in a modern car, rather than a video game, it's quite the thing to experience. 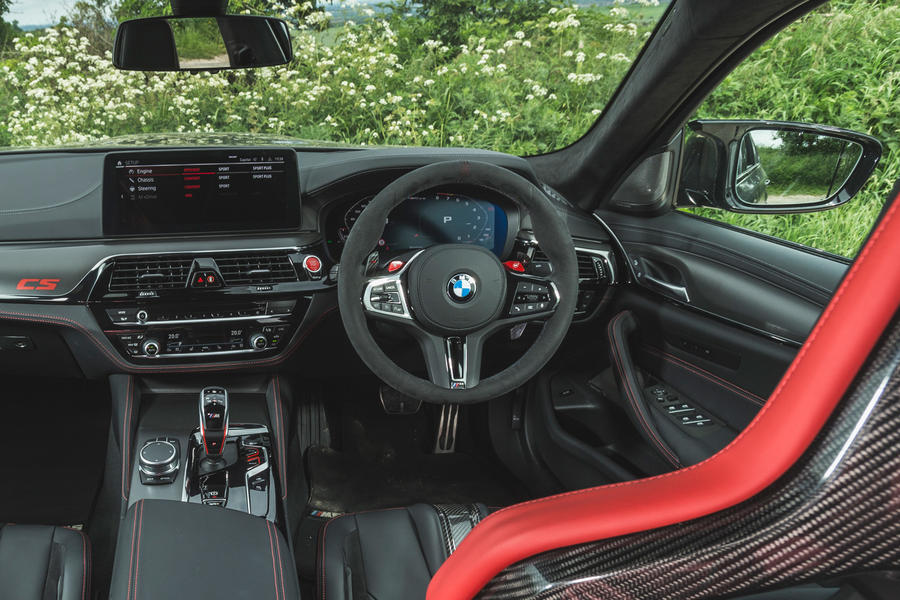 If you want to buy an M5 CS, you will have to get your head around the idea of a £140,000 M5 first. That’s not easy, and I dare say that it might be all the harder if ownership of an earlier F90 M5 has already cost you a hefty five-figure sum in depreciation over the past few years.

Much as the M5 CS clearly isn’t trying to do a Porsche GT3 impression in terms of the way that it drives, it could certainly do with some GT3-level residual values. However limited its numbers may be, you wouldn’t bet on it producing them - not least because M5s exist to be used, not collected and fawned over. That’s as it should be, but it will always make such an expensive M5 an even more expensive ownership proposition.

Still, even if you do struggle with this car’s price, you wouldn’t argue having driven one that it’s not exactly the kind of CS treatment that the M5 needed. If this ever-rapid but newly rewarding, ever-usable performance saloon is BMW’s idea of the ultimate M5, that's good news for the future health of this car, and it's worth celebrating. 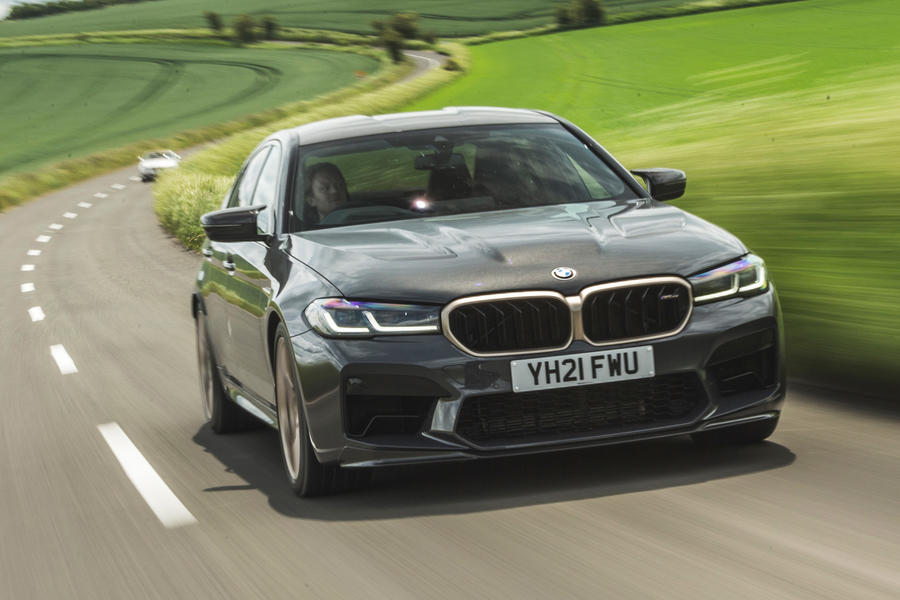 @Peter, please reread my post. Why is it you only find fast BMW's acceptable whilst other fast cars makes are unacceptable.

Ever driven one Peter? And by the way, if you drive either of these vehicles on the roads in the manner you suggest you would belong in Jail. Just an aside as well. Teslas hold their value quite well thank you if you ever have a peek on autotrader. You would be astonished at how much M5s lose their value.