From £88,8808
More power, lower and firmer suspension and sharper steering inject even more driver reward and drama into the M5
Open gallery
Close

Another week, another Competition version of a BMW. But unlike the M2 Competition we reviewed last week, the M5 Competition is an addition to the range rather than a replacement for the regular M.

There are a few prongs of thinking on this one. The biggest is that an M5 has a broader range of use than an M2 anyway, so there’s a reason for keeping both models in the line up. The standard M5 is for those who just want to potter around in a fast approximation of comfort and the M5 Competition is for those who want a bit more focus and driving keenness. Not many M5 owners are track-day goers, unsurprisingly, given that it’s a 1940kg, five-metre-long saloon car.

BMW reckons that, typically, 50% of a market will drive hard enough to pick the Competition version, though. A bit less in the UK: 30% is the estimate.

Other lines of thinking: I suspect there’s rather more margin on an M5 than an M2, so you can sell ’em both. And it’s not like there’s much of an engine difference between the two, either. 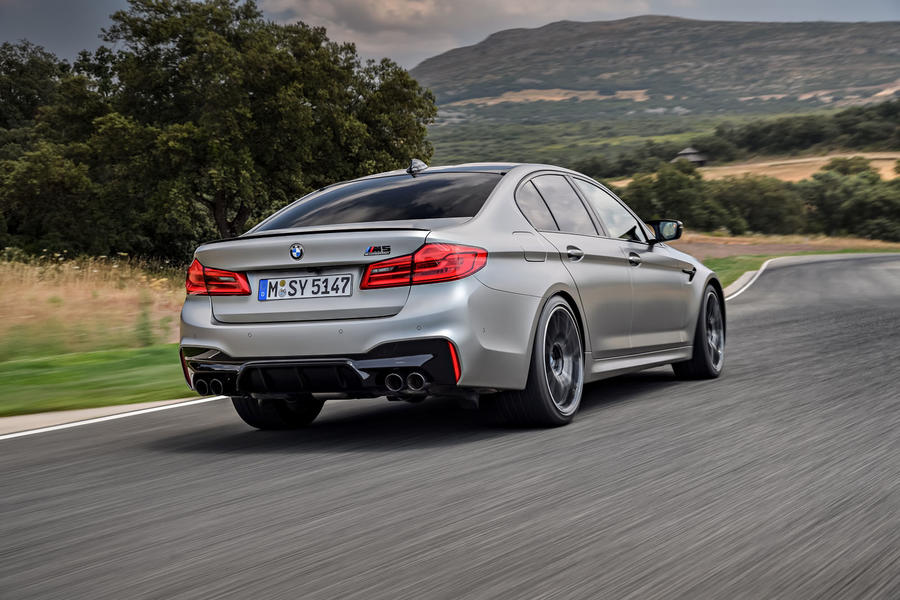 The engine is largely mechanically the same as it was. A bit of additional cooling accounts for the 10kg extra the Competition weighs over the standard M5 but, like the additional poke, I doubt that’s what you’ll notice the most about this new variant.

More likely is that you’ll feel the 7mm drop in ride height and new damper hydraulics and springs that are about 10% stiffer all round and are combined with an increase in camber at the front, with modified toe-links and anti-roll bars at the back. It slots into the range straight away and costs £96,205, which is £6500 more than the regular M5.

We rather like the regular car. You can read about one quite often, as we've got an M5 as a long-term test car and we’ve pitched it against its rivals a fair few times for videos, road tests and features, too. 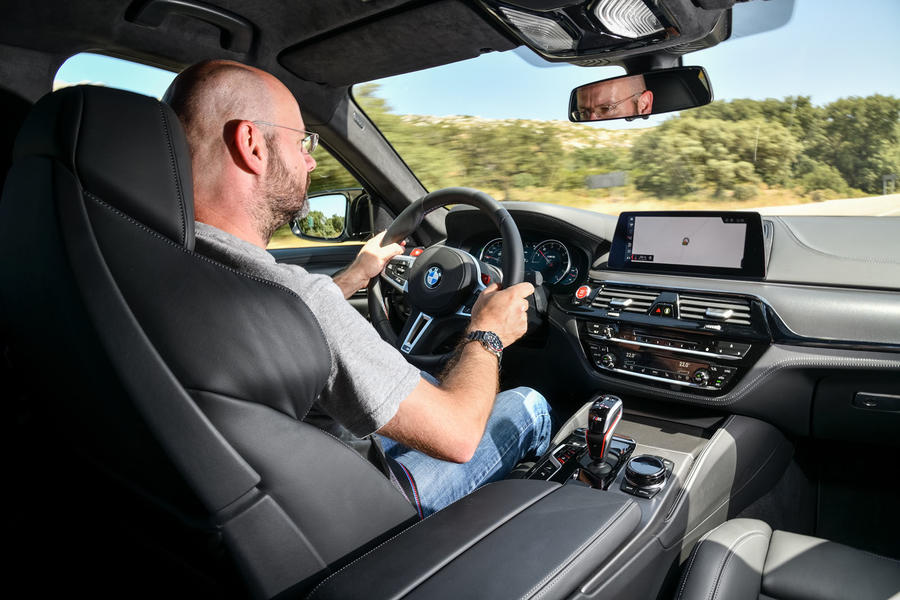 What it does especially well is take you from one place to another very quickly and in quite a lot of luxury. If you want to overtake, or filter into faster-moving traffic, the oomph arrives in reassuring surges, so the capability makes it a particularly easy car to rub along with.

But it ain’t a sports car. I hesitate to use the words ‘sports saloon’, really. Nothing of this size really can be, but some do the noises and responses that make you go gooey better than others. And so far there has been an argument that a Mercedes-AMG E63 does that slightly better than the BMW. I’ve felt that the BMW is a more accommodating and easygoing, and ultimately a more capable car all round. But that AMG V8 makes the right noises.

And I think that’s what BMW is trying to address with the Competition. It has worked.

We’ve tried the M5 Competition in two places: first, a very long, very warm race track, half of which comprises corners. Second, on some very narrow, quite bumpy roads around it. Neither is the autobahn or wide, sweeping Germanic country road that would be best suited, you imagine, to an M5. (But they did quite suit the M2 Competition we tried in the same place.)

The surprise, then, was that it was great. I know, I know: you’re not going to take it to a race circuit. But do, just once, please, to be amazed at what it can do.

If there’s another 1900kg-plus car that can seat five people and yet go and stop and corner like an M5 Competition, and come back after six laps and tinkle and ping away in the pit lane like you’d just taken it to the shops, I’ll be amazed. You can have carbon-ceramic discs as an option on the M5 and, usually, given it’s predominantly a road car, I’m not sure I’d bother: they’re seven grand, and unless you stand on the anchors often, they squeak like a dozen hungry guinea pigs. But they resist fade and deal with the tremendous temperatures generated by a saloon that can go from standstill to 62mph in 3.3sec incredibly well.

And the Competition is good fun, too. Not just in reminding you what feats it’s possible to make heavy engineering do. It’s well balanced, it steers quickly and keenly, and its four-wheel-drive system feels predominantly rear biased, but quickly and relatively smoothly pushes power to the front when it starts to slide, to give reassuring, smooth, handling neutrality.

On the road, though, is where it matters and where there’s also some extra welcome keenness. Ride comfort doesn’t feel like it has taken too much of a dive – although if you make the adjustable dampers any firmer than Comfort on the road, you’re bolder than I am. But it’s different, rather than worse. Body movements in the M5 Competition are sharper, but they’re over and done with more quickly, so in a way, the body feels flatter, and the worst edges are still rounded off.

The most striking thing was driving over some really poor surfaces in an M2 and then an M5 Competition: that’s where you can feel what great work the adaptive dampers are really doing to keep the body mostly flat.

The steering’s sharper and keener as well. The steering itself is the same, but the camber increase, plus the lower, stiffer suspension just brings with it much better precision to a rack that’s usually pleasingly weighted but doesn’t give much back. There’s still not ‘feel’ here, but there is lovely self-centring and a positivity and accuracy to it that you’d usually go to Alpina to find.

So, in short, the M5 Competition turns up the excitement and involvement where you’d want it to, and doesn’t turn down the comfort too much while it’s at it. I’ve always thought that if you just want rapid comfort from a 5 Series, you’d be better off without an M. So if you want the best super-saloon and, perhaps, something approaching a sports saloon, the Competition is the M5 variant to have. 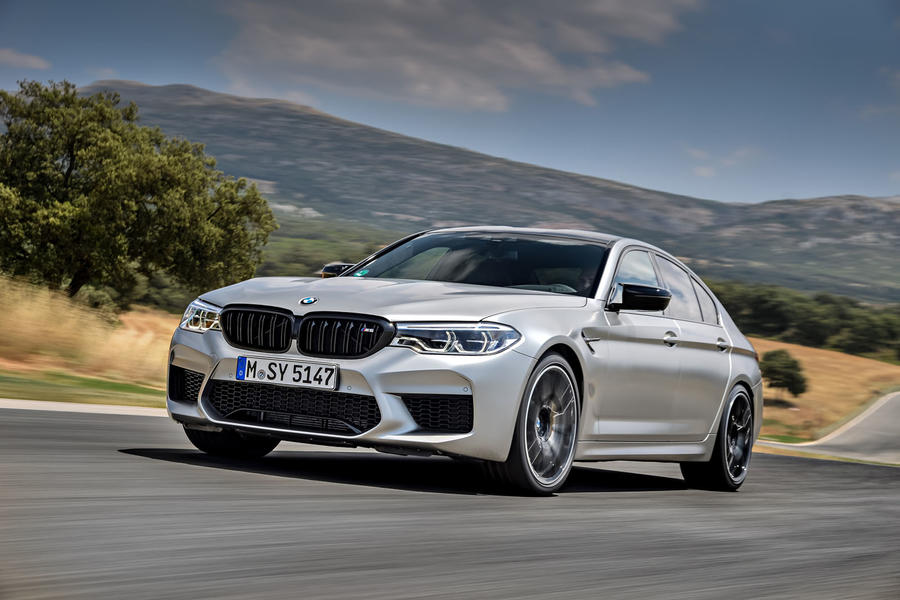 what a complete and utter

what a complete and utter glorios machine this thing nearly has 700hp, what a beast!!!!!!

I would have expected less...

The article went "south" the minute the chap mentioned a gain in weight which is the real "challenge". Sport really means light as possible and as stiff as possible so why not get rid of all the excess weight and have a more focused car, these cars have lost the plot and have just become a "hectors house / gin palace" when they should have been shorn of electric windows and any other weight inducing devices..wind up windows etc. In any case the 4 star rating is the outcome.

Yet another hi-po car looking for a reason to exist....