From £88,8809
Super saloon deploys four-wheel drive to improve every facet of its driving experience. Faster and more capable than any, and more exciting than most, of its celebrated predecessors
Open gallery
Close

The sixth-generation BMW M5. The car to which, somehow, BMW’s M Division has added the driveshafts and controllers and clutch plates and joints and everything else necessary to so contentiously switch its long-serving super saloon idol from two driven wheels to four. That has also been made larger in every dimension than the car it’s succeeding; that has a more powerful, torque-laden turbocharged engine, too, and the most sophisticated electronic chassis control system that any of BMW M’s performance saloons and coupes have ever had.

All of that is true - and yet this car is also lighter than its simpler, rear-driven immediate predecessor. Admittedly, only by 15kg – but still; it’s lighter. That’s where we are. You can replace a two-wheel drive performance car with a four-wheel driver in 2018, and save weight. My ghast is well and truly flabbered.

But will it stay that way? And would yours, after a good, fast cross-country blast on British roads in this 591bhp fast four-door? Has the aforementioned big switch been made with the delicacy and care we’d all hope for?

If you’ve been a follower of the M5 for the better part of its remarkable three-decade-long history, you can look forward to a full Autocar road test workout on the new car and a separate group test get-together with a couple of likely adversaries in the coming weeks. By the time both are done and dusted, there will be no room for doubt in any important area. 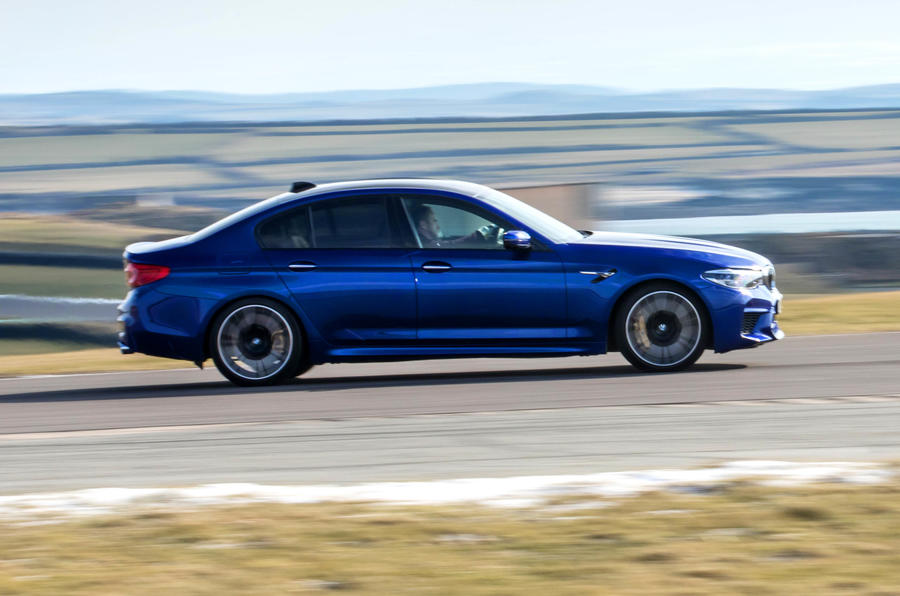 As regards first impressions, BMW laid on a couple of hours at Anglesey circuit to provide those, along with a couple of hundred miles on Snowdonian roads – many of the latter having been made to feel particularly narrow by a saloon that now measures more than 2.1 metres across the mirrors (a McLaren 570S supercar is narrower).

Both tests, nonetheless, were rapaciously devoured by a car of truly extraordinary pace, traction, agility and composure for something so practical – and one whose purity of balance and vividness of driver appeal seems to have suffered not one iota as a result of what’s been done to its drivetrain. Considering the car in the round, in fact, I fail to see how anyone could claim that both aren’t major improvements on the standards of the ‘F10’.

This isn’t our first shot at explaining exactly how much is new and interesting about this near-600-horsepower BMW; after the reaction to Munich’s announcement of the car’s adoption of four-wheel drive, a test of a prototype in 2017 delivered our first taste of what might be expected, followed by a drive review from the car’s European press launch in Portugal later in the year. The message to take away from both is simple: in practice this car can use its four-wheel drive system as little, or as much, as you choose.

And now? I was certainly surprised at not finding quite the dynamic breadth-of-ability in the M5 as our earlier reporting suggested. Earlier we told you that it “could slide into your life as easily as a 520d”; on UK roads, that sentiment could stand a bit of tempering.

This is a firmly sprung car – has to be, I suspect, to produce the handling dynamism those M Division bosses targeted for it. It’s never a harsh- or really uncomfortable-riding one – but make no mistake, it’s no turbo V8 armchair. And nor would you want it to be, by the way: the M5 is a car of much greater purposefulness and pedigree than that.

Use ‘comfort’ mode on the adaptive dampers and there’s certainly less bite about the vertical body control, but it remains a wee bit tetchy at low speeds and over a less than smooth surface. ‘Sport’ produces better-matched spring and damper rates, a more harmonious and responsive kind of high-speed close ride control, and is the setting I’d pick for most road driving. And that goes not just for the suspension, should you be wondering how you’d ever navigate so many configurable systems (steering, gearbox, engine map, exhaust, four-wheel drive system, stability control). See: where BMW adds complexity, let Autocar bring calm.

On the track and at the limit of its grip, meanwhile, the standout feature of the M5’s showing is how balanced, nuanced and interactive its handling is, even without needing to activate its ‘2WD’ mode. Moreso, I would say, than a Nissan GT-R or an Audi R8, you can steer this near-two-tonne saloon delicately into and through corners with power, using its rear wheels as your chief vectoring point, and with the car’s drive system set to ‘4WD Sport’ and, if you prefer it that way, even with the electronics on, but dialled down, in ‘M Dynamic’ mode.

There is that much balance and adjustability with room to spare – not to mention now truly enormous traction and acceleration, and crisper mid-range throttle response than in the ‘F10’.

The M5, to put it simply, makes four-wheel drive feel like rear-wheel drive precisely when you would prefer it that way. Application to a four-wheel drive saloon has somehow given the BMW M active rear differential a greater starring role than it has ever had before.

That dynamism isn’t really accessible on the road – but here, the M5’s keenness on turn-in and mid-corner poise, and its superb vertical body control over testing crests and through compressions, really come to the fore; they make a big car feel light and spry, even if they can’t make it feel small.

On the motorway, meanwhile, the car is surefooted and supremely stable, hitting big speeds in the blink of an eye and ultimately making them feel small. Ultimately, that is, but not immediately. The car's outright performance level is unrelenting and yet unimposing.

The M5 has one of those accelerator pedals you tend to tip into, only to feel the car take off at a rate that's faster than you needed or expected it to go straight away. So you instinctively check yourself; ease off with your right foot; take stock. But only a moment later, with your next dive, do you realise there was so much more to come.

And so getting to the bottom of that accelerator pedal is something you do by degrees and with repeat visits - followed, at least initially, by childish bursts of laughter. 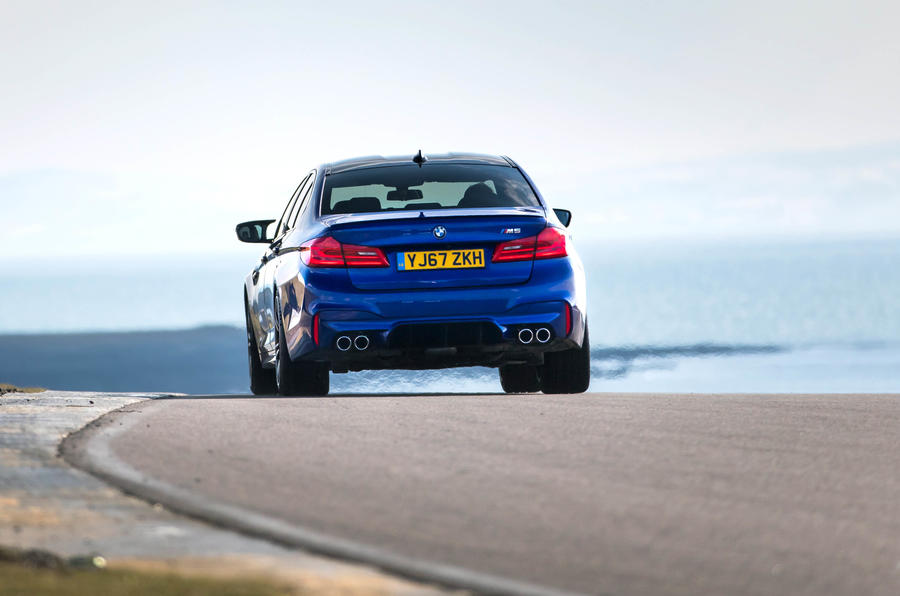 This is a four-wheel-drive super saloon of amazing real-world pace, range and finesse, but if it isn’t quite perfect, it may only be because it doesn’t suit your personal tastes.

For me, there’s too much variety and choice with which to engage when you’re driving the M5. While a road tester’s perspective always exacerbates the problem (because we’re in and out of new cars, and seldom become familiar with them like an owner would), I simply don’t like the notion that, by operating via mutually discrete ‘comfort’ and ‘sport’ modes for its many controls and systems, you’re always switching and fiddling with the M5 and never feel like you’ve found that ideal, everyday, middle-ground compromise. Even after a couple of hundred miles, I was still fiddling.

But that’s a complaint I’ve had with BMW M cars for a long time, and not exclusively either; it’d be totally unfair to criticise the M5 for it in more than a passing mention, when it's such a remarkable achievement. This is a car that’s just become even more capable, even more usable, even faster and even more exciting than it may ever have been – a combination driver's cars so very rarely manage. And if it’s isn’t the very best car of its kind right now, the beating of it should be nothing if not memorable.

The answer to a question nobody asked.

Phenomenal machine .. but it gets me wondering about its actual purpose. If I wanted a vehicle with this level of performance and handling, I'd probably choose a sports car, rather than a 2-ton 5-seater - I can't imagine many considering this for track-day thrills. Conversely, if I wanted a 2-ton 5-seater for practical reasons, I doubt my passengers would appreciate being subjected to the sensual onslaught the use of anything approaching its potential would deliver, which in any case would be way beyond any sane road usage.

If your buying one you choose your exterior/ interior from the individual Pallette, like the one on the Sky Tv advert which is a special Paint job with a Matt Black grill, inside my preference would be a Black Leather, hides the stain if you wear Jeans a lot,and I don’t mind the aluminium machined fascia, it’s cool to the touch,and I’d spec Carbon ceramic Brakes also, my money my choice, what’s yours..?

The interior is available in

The interior is available in different colourways, people. Like saying you wouldn't buy a house because you don't like the colour the lounge is painted.

I rather like it but would prefer an estate, which they probably won't build. Alpina it is.