8
Share review
How much of a driver’s car remains when you take the roof off the M4?
Open gallery
Close
by Illya Verpraet
19 November 2021
Share

First, it was the manual gearbox that fell by the wayside. Then it was rear-wheel drive. So your only choice for a BMW M4 Convertible today is a four-wheel-drive automatic. And you know what? That’s great.

The powersliding enthusiast can still buy a rear-drive coupé, or just put the xDrive system in rear-wheel drive mode, and the purist is likely to be catered for by the upcoming M2. What you’re left with is a drop-top M4 in the spec that most people were going to order anyway.

The big news with the convertible M4, or to give it its full name, the M4 Competition M xDrive Convertible, is the same as with the regular 4 Series Convertible: gone is the metal folding roof. Instead, you get a fabric top. You might hope that saves weight, and BMW does claim the roof itself is 40% lighter than the old model’s. However, because the 4 Series has grown so much and gained that four-wheel drive system, the whole car is actually heavier than before, weighing a portly 1920kg. That’s also 145kg more than an M4 xDrive Coupé.

More so than the weight, the fabric roof benefits the styling. Since the boot no longer needs to hold three metal roof sections, the whole rear deck can be lower, more shapely and more like the coupé. The roof itself can also have a more attractive shape. Indeed, in the metal, it’s quite an elegant shape and a lot sleeker than the slightly saloonish old model. And yes, it has The Grille. Has enough time passed yet that we can admit it looks quite good? The fabric roof also enables more boot space – up to 300 litres when the top is folded, 80 more than in the old model. When the roof is up, that increases to 385 litres.

As with most convertibles, the majority of the additional weight comes from bracing to get back some of the fixed-roof equivalent's torsional rigidity. As such, the M4 has an aluminium shear panel in the front-end structure, underfloor bracing elements and a rear axle subframe with a rigid connection to the body. 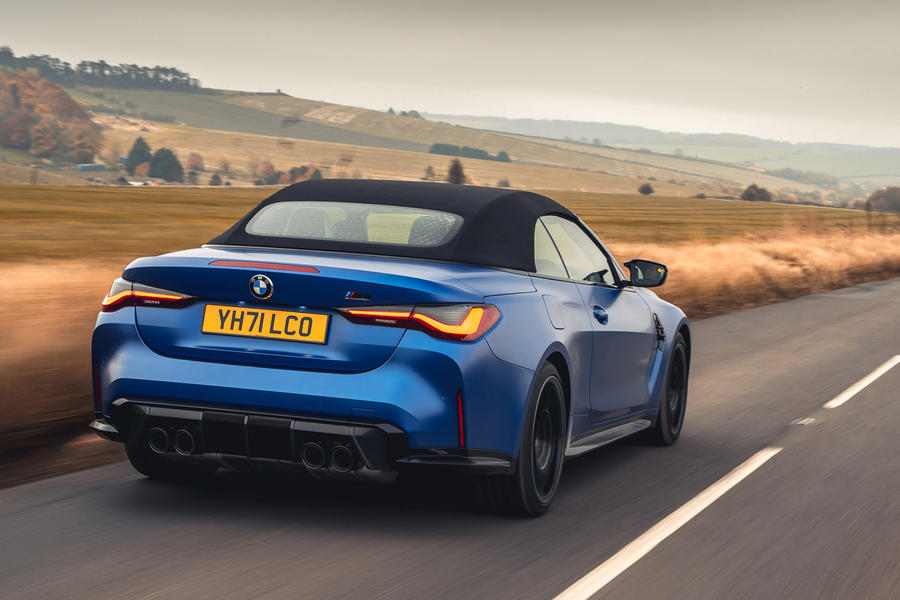 Those specifications suggest quite a hardcore, serious performance car, so the question is how that lies with the more relaxed, cruiser character of a convertible.

Superficially, it feels very similar to any other M3 or M4. You’re looking at the same dashboard, and the beautifully made and user-friendly interior and iDrive system; you’re sitting in the same brilliantly supportive but slightly silly carbon bucket seats (more normal seats with an Airscarf-type system are standard); and there is the same firm ride and relatively high level of road noise.

It’s still a car you would be very happy to use every day, though, and having a fabric roof rather than a metal one changes very little in that respect. You would be hard-pressed to notice the 0.2sec penalty in 0-62mph acceleration compared with the coupé, because it feels just as unusably accelerative.

The xDrive system is also perfectly integrated. Leave everything in Comfort mode and traction is absolute, but engage M Dynamic mode and, particularly on a cool autumn day, it will feel as rear-wheel drive as you could ever want on the road. Out of tight corners, a wiggle of the hips can be enjoyed with total confidence because it’s nice and progressive, and you’re never on your own. As with other xDrive M cars, you can turn the stability control all the way off and put it in rear-wheel drive mode, but given how playful it already is in the halfway mode, that’s something best left for the track.

Where the M4 convertible can come undone is on particularly uneven roads. Here, you can feel the lack of torsional stiffness as the steering column feels like it’s moving about and the whole car gets messily deflected by bumps in a way that the hard-top version doesn’t. The steering precision and feedback that are normally there come and go with the terrain, too.

We’ve said previously about the coupé version that the stiffer suspension settings are worth using because the body control gains outweigh the small reduction in absorbency, but in the convertible, they just exacerbate the body stiffness issues. 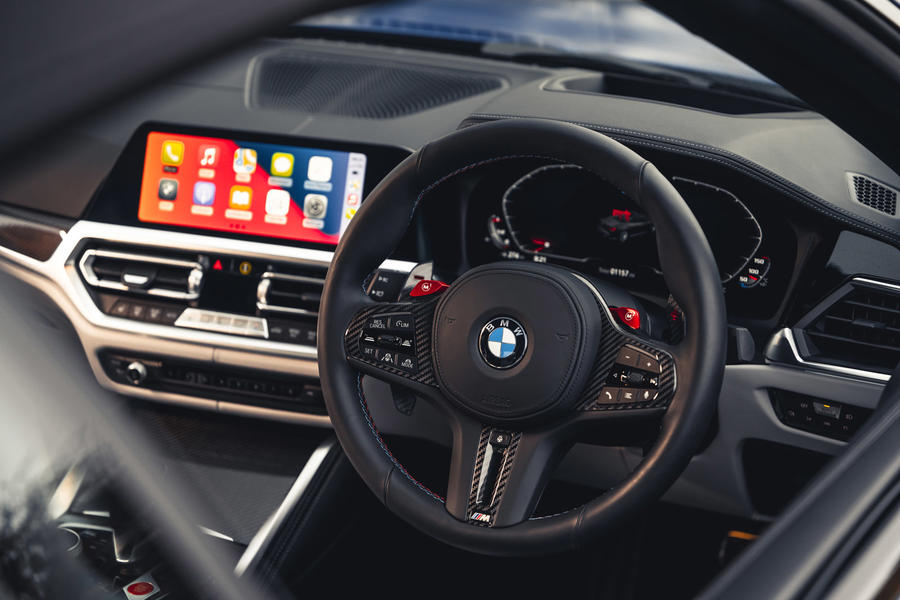 Most of the time, the M4 Convertible is what we’ve come to expect from the latest generation of M cars: fearsomely fast and supremely balanced but as easy to drive and almost as painless to live with as any 3 Series. However, on a typical fast B-road, it lacks the final element of precision that you want to confidently place what is now quite a large car with the capability to move extremely quickly. In fairness, that’s still the norm for big convertibles.

The new M4 Convertible starts from £83,355. Considering that the previous generation cost a whopping £20,000 less when it was introduced, that seems like a lot of money. However, it’s actually less than a Mercedes-AMG C63 Cabriolet, which is still the outgoing model because we’ve yet to see AMG or convertible versions of the latest C-Class. A Porsche 911 Cabriolet will set you back at least £97,130, and that’s for a Carrera without all-wheel drive and considerably less firepower. There hasn’t been an Audi RS5 Convertible since 2016.

Even though the M4 Convertible is somewhat compromised as a driver’s car, in that light, you’re still getting an awesomely capable and entertaining drop-top for the money. 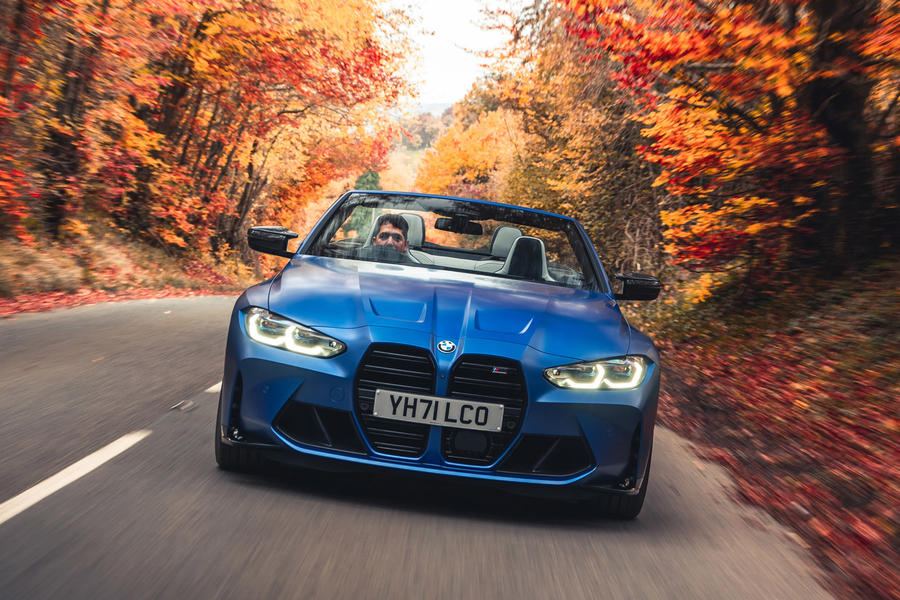 Hans, how many creases can we get in the bodywork?

As many as we can away with, those body repair shops will curse us damn Bavarians!

Erm, no I am German so I don't find things funny (apart from laughing at all those non-german f^ckwits who will buy any old sh!te off us because it has the right badge on it ha ha ha )...

Nope it doesn't look good. We're just getting used to it. If only this had a better resolved, more appealing design.

"A Porsche 911 Cabriolet will set you back at least £97,130, and that’s for a Carrera without all-wheel drive and considerably less firepower."

That's really overstating things, the 911 Convertible has 444bhp, down just 59bhp so it's NOT "considerably less firepower". Plus, the 911 is significantly lighter which negates the power deficit.

I'm not a 911 fan by any means but Porsche's 911 models have always shown power isn't everything; ergo, the Jaguar F-Type R from a brand you guys fanboy about. Much more powerful but much heavier and still not as quick overall....