From £55,9259
The CS meters out ruthless performance with clinical control. It’s questionable value for money, but a stellar drivers’ car, and a fitting finale for the F80 M3
Open gallery
Close

The taut, indigo form before you represents BMW the end of line for the F80-generation M3. It’s called the Club Sport, and it uses the clout of internal combustion alone to drive the rear wheels.

That’s obvious, though, isn’t it? Since its conception in the late-eighties, every 3-Series breathed upon by BMW Motorsport GmbH has been the same: propelled mainly by six cylinders, but occasionally four or eight, but always pushing and not, heaven forefend, pulling.

But that might soon change. When the G20-generation car arrives in a couple of years from now, it could well employ an electrified powertrain to reliably take total output closer to 500bhp while allowing BMW’s red-hot junior saloon to more easily conform with a stricter new Worldwide Harmonised Light Vehicle Test Procedure. Following in the footsteps on the latest BMW M5, the successor to the F80 might also deliver drive to its leading axle, changing the habit of a lifetime.

Nothing is certain, of course, but these would represent wholesale changes to the M3 recipe. Neither is it any stretch to imagine how popular, or otherwise, such a development might be with those who considered even forced induction a deplorable departure following the gloriously free-revving atmospheric V8 of the E90. M Division boss Frank van Meel talks about how an M3 will always feel like an M3 no matter the hardware, but commercial and regulatory objectives mean he has little time or need for nostalgia.

Autocar readers might just feel differently, warmly referring on occasion to the last ‘proper’ this or that. That’s where this car comes in, because as far as the M3 is concerned, the Club Sport could be ‘the one’.

It means this lightweight, track-ready saloon is significant before you even get to the nuts and bolts, the composites and aerodynamics – and before you consider how uncommon a sight it will be on the road. BMW The M4 coupe will remain in production for some time to come, but the last M3 of any description will go down the line in June, its tenure lightly truncated by the WLTP test cycle.

The M4 was always intended to last a little longer and will benefit from a new particulate filter to facilitate that. The upshot is that no more than 1200 examples of M3 CS will leave BMW’s Regensburg plant, and there’s also a price tag sure to cement its rarity. You’d have to wholeheartedly buy into what is rather a niche corner of the automotive world – the one inhabited by factory-prepared trackday saloons – to stump up the best part of £90,000.

What you’ll get in return is the same black-accented aesthetic formula you’ll find on the M4 CS released last year. The body features a wickedly profiled carbonfibre Gurney flap to match a similarly aggressive front splitter.

Painted on top but naked underneath, so too is the bonnet wrought of carbonfibre-reinforced plastic – it’s 25 per cent lighter than that of a standard M3 – and if you sidle up to an M3 CS eventually a broad, sunken vent ahead of the brutal powerdome will reveal itself. It gives the car’s snout a DTM-style rake, something of a rictus snarl.

And forget a finger: you could barely get even a cigarette-paper between the rear wheelarches and the semi-slick Michelin Pilot Sport Cup 2 tyres. They’re wrapped around lightweight forged alloys wheels of 20in at the rear and 19in at the front. On a Competition Pack M3 – until now the most focussed variant – you’ll find the larger wheel size at the front too, though the CS dials down the glamour for greater steering response.

Even so, not since the M3 CRT of the noughties has the spiritual cornerstone of M Division’s operations held such deliciously serious visual appeal. 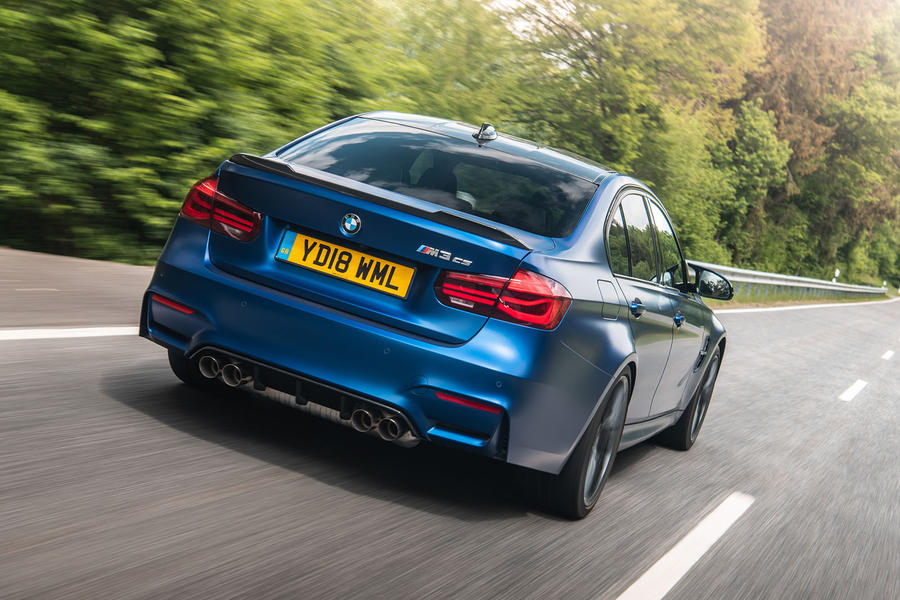 And so you climb aboard and sink low into sinuous two-tone seats complete (or rather, incomplete) with cut-outs. Where the new BMW M5 places its occupants a fraction too high, the driving position here remains an utter peach, your eye-line grazing a Alcantara-clad three-spoke steering wheel that true to BMW form is still a strangely generous in girth.

There’s also Alcantara on the centre-console and dashboard, which is pared-back in terms of switchgear but with no apparent lack of functionality. You could live with this, happily. There’s climate control and BMW’s iDrive-operated Professional infotainment system, and a Harman Kardon sound system is fitted as standard.

The persona is satisfactorily hardcore, even if you don’t get the lightweight door-cards from this car’s M4 sibling (a bonus, perhaps, as those slim-line pieces don’t offer any storage – there’s still no central armrest, mind).

Despite the wincing asking price, BMW’s S55 3.0-litre twin-turbocharged straight-six doesn’t benefit from the water-injection system of the M4 GTS. It doesn’t need that technology, developing only 10bhp more than the 444bhp you’ll find in a M3 Competition Pack.

And honestly, does a saloon capable of dispatching 62mph in just 3.9sec and running on to a limited 173mph need to be any quicker? It does not, but it can always be lighter. Strangely, this car’s substantial use of CFRP results in a saving of only 10kg over the Competition Pack, but the centre of gravity is said to be usefully closer to the road.

Today those roads are in the shadow of the Nürburgring. They’re almost as challenging as the Nordschleife itself, only with more of the mottled surface that’s limited to the jowl-tugging corner known as Karrussel. Given the tyres in question, warm weather plays heavily into this car’s hands, and straightaway the precision with which an M3 CS turns into corners is startling, even if you’re familiar with the Competition Pack on which it is so heavily based.

Indeed, it’s only the trio of steering modes, those lightweight wheels and sticky tyres, and the calibration of the electronic stability control and the active M differential in the rear axle that separates Club Sport from Competition. The rack and its gearing remains unchanged, as do the spring rates and suspension geometry, so there remains BMW roughly 0.5deg more negative camber than on the standard M4.

The collective effect of these minor alterations is considerable, however. This is now a chassis of extraordinary composure, resulting from deeper reserves of tightly controlled pliancy than you might imagine. With less unsprung mass there’s a predatory manner to direction changes, and a palpable feeling that the chassis sets itself a touch earlier during the entry phase than a Competition Pack does.

Though it was hardly required, it feels as though a veneer of inertia has been peeled from the car. Owing to its B-pillars, the M3 CS is also fractionally stiffer than the M4 CS and that’s not hard to detect if you drive the two in succession.

Anybody who has driven a McLaren will recognise the pedal-feel of the brakes, too. On our test car they use BMW’s optional carbon-ceramic discs (denoted by gold calipers) and feel pleasingly light on assistance, biting firmly and progressively and permitting you to lean increasingly hard on a front axle that only wilts into understeer only once during an entire afternoon’s committed driving.

Such are the adhesive properties of the tyres, in fact, that third-gear sweepers can rapidly boil down to mind over matter, and you get the gratification of feeling that differential, recalibrated for vast grip, subtly nudging the nose inwards under power. The M3 CS then explodes out of corners with just a hint of squat and almost mid-engined poise.

Aside from a seven-speed dual-clutch transmission that seems reluctant to downshift early, therefore limiting the opportunity for engine braking, our only objective complaint is that while the sensory relay from contact patch to steering rim is improved, it’s still a marginal affair. A clearer line of communication runs to the backs of your thighs, however.

But what of this engine? It’s never been the most affable device, though in this application it barks viciously through a sports exhaust rounded off by a quartet of stainless steel tips. It also seems to punch harder through the mid-range than ever before, which is the result of an improved map rather than any hardware changes. Just like the M4, in the face of more powerful rivals the M3 has long wanted for greater in-gear shove at moderate crank speeds, and now it has it.

With all that balance and grip, this car’s limits are stratospherically high – too high, perhaps. Mind you, were a useful degree of temperature to be worked into the tyres on, say, a damp day back in Blightly, it would likely satisfy its driver in a way few others can, not least because M has slackened off the stability-control parameters both in normal driving and when you select M Dynamic Mode.

BMW This F80 M3, which began life with a capricious dynamic character, has become deeply intuitive and is no small way likeable. 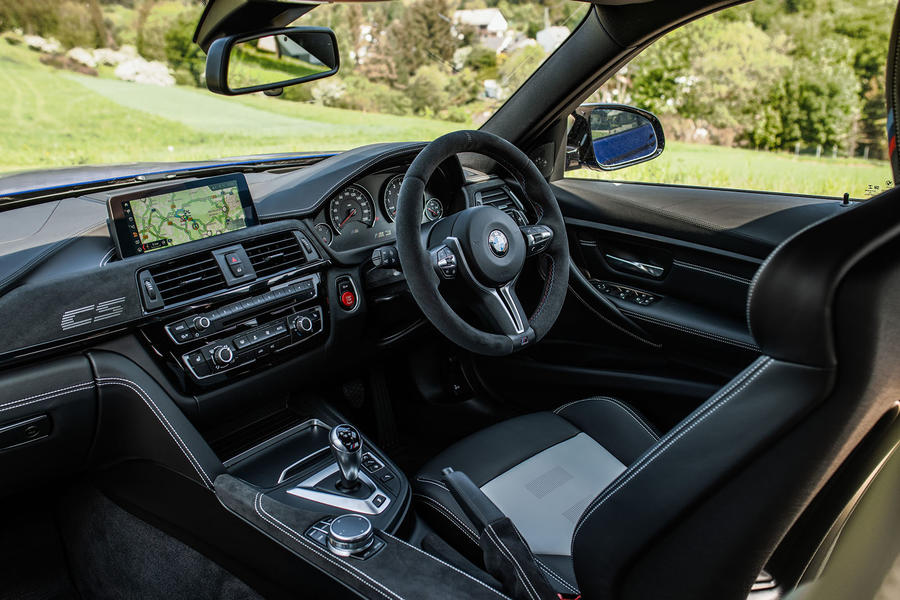 As you may have surmised, from a driver’s perspective the M3 CS is the most rewarding product M Division currently offers.

It is a deadly serious product, less affordable or playful or extroverted than an Alfa Romeo Giulia Quadrifoglio or Mercedes-AMG C63 S but equally usable and, in its own way, absolutely as fulfilling. It would then proceed to run rings around those cars at a trackday.

In the cold light of day even such a phenomenal bandwidth is not enough to justify a circa-£30,000 premium over an M3 Competition Pack that’s already terrifically capable.

Then again, the contentment of owning ‘the one’ would linger long after the sting of that early expense had faded. 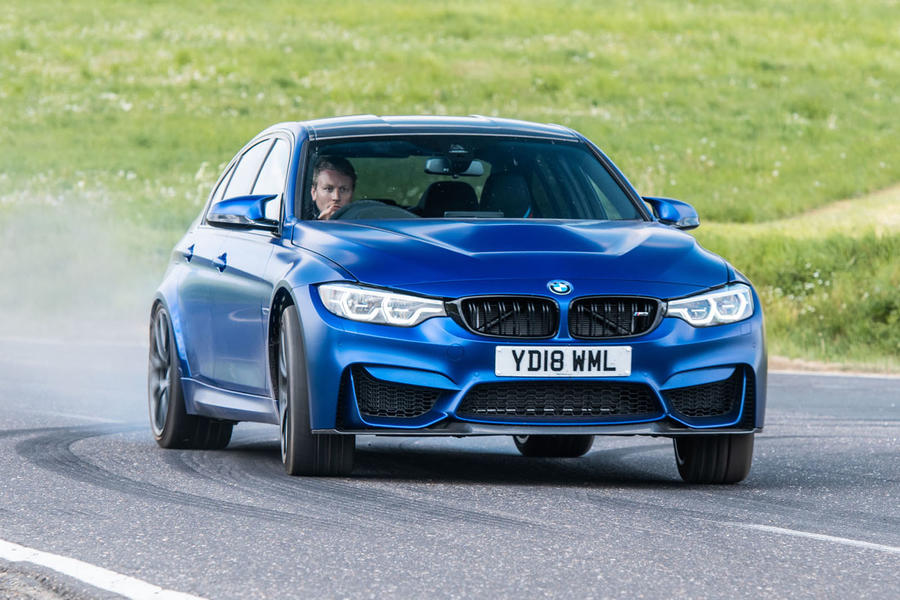 99 cent domain godaddy You can locate the most recent arrangements on domain name benefit with $1 domain Godaddy. You can purchase a domain name at a shoddy cost by visiting webhostingjoin.com.

We drive the new BMW M3 CS, the ultimate expression of the M3's heritage. First Drive Review  May 2018  Photos By The Manufacturer.essay services uk | essay services