From £130,4109
Our 700-mile drive from France to the UK proves the new BMW 760Li xDrive is supremely comfortable and entertaining in equal measure
Open gallery
Close

This is the very first UK drive of the all-new, all-powerful BMW 7 Series M760Li xDrive, but it didn’t start out that way. You see, we’ve driven this car as it should be driven, and as one would assume many prospective buyers might: a full international tour from Megève in the French Alps over 700 miles back to Blighty. It’s a tough job, but when you’re as dedicated as we are at Autocar, sometimes you simply have to put in the hours behind the wheel.

We’ll let you know what it’s like to drive in a moment, but first let’s touch upon the M760Li’s modus operandi. As you may be aware, it’s no M7, but it is the closest we’ll get to one; think of it as a 7 Series with a patina of ‘M-ness’ daubed over it, rather than woven intrinsically into its DNA.

The previous range-topping 7 Series was the 750i, but for some, eight cylinders simply doesn’t cut it. So, the M760Li borrows the 6.6-litre twin-turbo V12 of the Rolls-Royce Wraith, and which may yet end up in the next Phantom. It’s been detuned for this car, but still, 601bhp wouldn’t look out of place in a supercar. And I’ve just checked: the 590lb ft of torque all but matches a John Deere 6175R tractor, although the BMW V12's twist peaks earlier, at just 1500rpm. 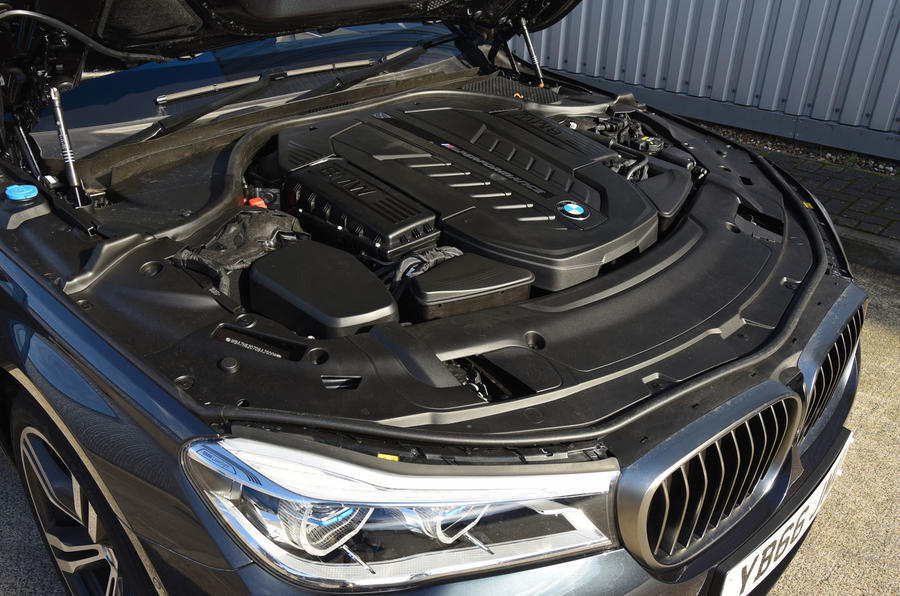 This car has everything thrown at it, so you get four-wheel steering, active anti-roll bars, an active exhaust, air springs tuned by M Division and an xDrive four-wheel drive system set up to push more power rewards than regular xDrive 7 Series models. Oh, and huge M Sport brake discs front and rear, gripped by distinctive blue callipers.

I absolutely adore V12s; even starting them is a cause for celebration. It’s the consitent whirr as those twelve compression points provide an almost turbine-like evenness when cranking, as opposed to the raggedy ‘whar-whar-whar’ of lesser-cylindered engines.

Once rotating under its own steam, the M760Li's N74 engine settles into a silent and utterly smooth idle that would pass the time-honoured 50-pence-piece balancing trick with ease. And that’s the way it remains during normal driving: relaxed and barely entering your consciousness. Switching to Sport mode enhances its timbre. And, with a little added intensity as well, just the right amount of howl percolates into the cabin without it ever sounding unbecoming. Purists won’t appreciate that some of this noise is synthesised sound that's drip-fed through the car's speakers, but I promise, it still comes across more classic V12 than classic Kraftwerk.

Of course, the performance is epic. Not just the outright accelerative force that tries to wrench your face off, but also the wonderfully progressive nature by which this colossus delivers its surge. Unlike the Alpina B7, which has a noticeable moment of lag, the M760Li is more responsive low down, then builds with controlled aggression all the way to its near-7000rpm limiter. Be careful lurking around this zone, though, because whatever gear you're in, you’ll already be going quickly, and in the blink of an eye yet more pace will be added as the eight-speed torque converter automatic gearbox discretely glides up a gear, carrying you on to ever-dicier speeds. 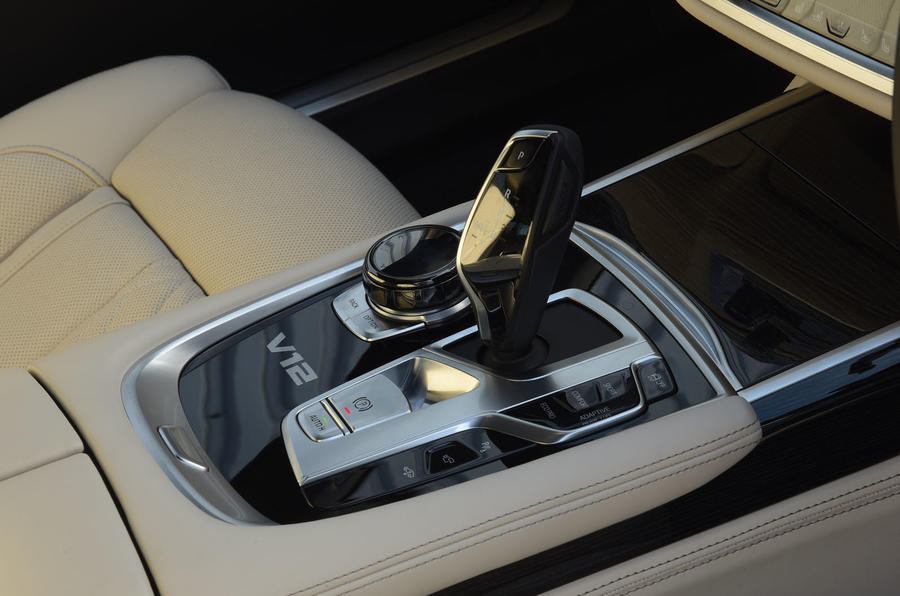 However, it’s only losing your licence you need to worry about, because the M760Li is totally infallible whether you’re climbing a snowy Alpine pass or circumnavigating a drenched M25. It’s this ability to transmit that tractor-like torque so effectively that separates the big 7 Series from its twitchier, rear-wheel-driven Mercedes-AMG S 65 rival.

Don’t think for a moment it’s boring, though. Switch off the traction control and suddenly you can start hanging the tail out on this two-tonne-plus car with ease. It’s quite bizarre how quickly it shrink-wraps around you, feeling barely any bigger than a 5 Series as you scythe left and right through the countryside.

That’s down to remarkably good body control, which in Sport mode limits roll while still keeping enough elasticity to retain stability over peaks and troughs. The rear-wheel steering plays its part as well, making the M760Li far nimbler than its enormous bulk would suggest it should be. And even though the steering is weighted lightly and lacking any real sensitivity, it’s quick, accurate and feelsome enough to let you guide the car's nose with confidence. 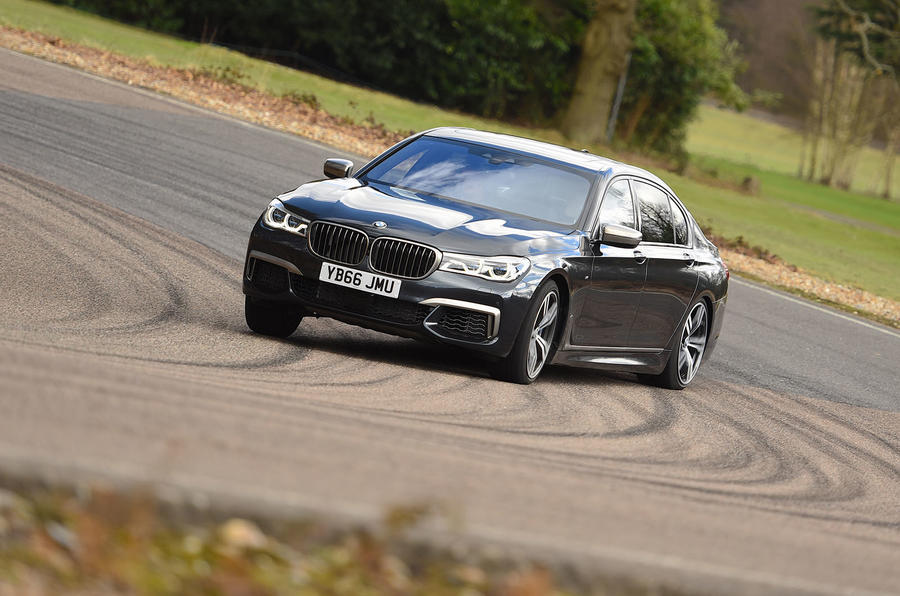 But what about the M760Li's other role, as a luxobarge? Well, in Comfort or Comfort Plus mode, it does that pretty well, too. Blasting through France it eats up kilometres with the detached serenity of a Eurostar train, gently floating along with barely any tyre noise and just the merest flurry of wind noise from its wingmirrors to let you know you’re making headway.

Then we hit the M20 this side of the channel, and began to wonder if it is the same car: suddenly there is more fidget, a little more roar from those fat 20in tyres and dull thuds through the cabin over sharp-edged intrusions. But these aren’t the M760Li’s failings; they’re created by our failing roads, and in any rival with similarly skinny rubber, the results would be similar. 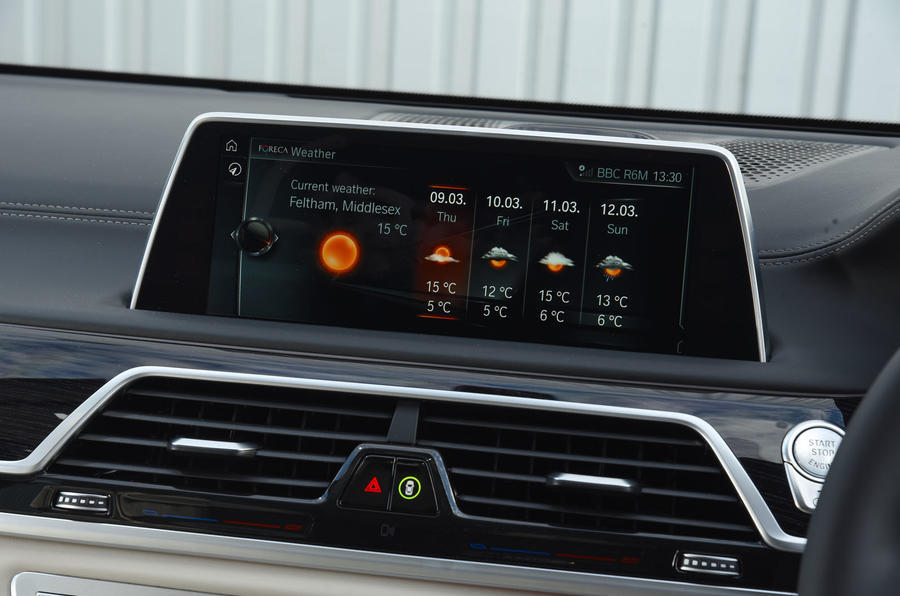 The interior might not look as fanciful as an S 65’s, but it’s still a wonderful place to sit for a twelve-hour drive, either in the front or the rear. We’ve tried the array of gadgets before in other 7 Series models: some work well, some don’t. The iDrive infotainment system is as intuitive as ever, the clarity of its 10.25in display flawless - as is the fidelity of the Bowers & Wilkins stereo, for that matter. Then there are the massage seats, which support you admirably, while giving you an invigorating, full-body pummeling.

Yet the point of iDrive's gesture control is still confounding, other than for trialling technology that if developed heavily might prove useful down the line. And the ionising air freshener? Perhaps I need to blow my nose more.

No one needs a BMW M760Li in their life, but then we could erase many a car working on that principle. So, accepting that it’s a little unnecessary and that a 730d would be the far more sensible choice, if you can afford one, should you want one?

Hell yes. As a car for crossing large distances in total comfort, it’s a gem. And when you arrive at your destination, if the roads are treacherous it’ll cope, and if the roads are a treat, it will delight. Next to the S 65 it’s a bargain, too, and while it might not quite match the Mercedes-AMG for comfort or kerb appeal, it’s easily a more engaging driver’s car.

And because you can't buy the xDrive version of the Alpina B7 in the UK (only the rear-wheel-drive model), you’d have to say the M760Li is a more appealing choice than that, too. We even matched the official claimed average fuel economy of 22.0mpg without trying - not that that will matter to most buyers, of course.

Good car for the price, This one will fit bloggers

A Jag XJ would be much better

A Jag XJ would be much better though since it doesn't look like a blown-up version of a photocopier salesman's 3 series.
Einarbb 13 March 2017

Sounds to me, somewhat wonderful

Sure wee bit less refined than the comparable Mercedes, but I don't see how that matters - except to a person for who refinement is everything, when the car has such a completely effective second personality.
View all comments (9)