From £28,3509
Share review
Arguably the most important model in the new 3 Series line-up proves diesel, and the Ultimate Driving Machine, are alive and well
Open gallery
Close

We live in times, most honest road testers will tell, when it can occasionally feel a touch overwhelming. So much metal, so many niches. Strange cars of weird shapes, weirder sizes, powertrains of unproven efficacy, answers to questions of which few even thought, let alone asked.

Sometimes you wish you could just press reset. If only there were a ‘revert to factory settings’ button, somewhere you could go where, just until your brain fills up with clutter again, everything seems normal. And there is: it’s called the BMW 320d saloon.

For successive generations, the 320d has sat calm at the centre of our universe while ever increasing amounts of madness have swirled around. Or at least it has for people with real needs and real limitations to their lives, be they budgetary, geographical or logistical, who crave a car that works on all levels, none more effectively than its ability to appeal to the enthusiast driver within us. You know where you are with a 320d. Six gears (in the manual), five seats, four doors, three boxes, two driven wheels, one 2.0-litre turbo diesel. Simple.

And yet I felt with the previous, F30-generation model not so much a blurring of the picture as just a slight fuzziness around the edges. Maybe it wasn’t helped by Mercedes-Benz taking such a strong step forward with the now very dynamic C-Class, but I felt the 320d’s default position as the absolute weapon au choix for normal enthusiasts living in the real world threatened as never before.

This new one came into my life shortly after a Dacia Sandero and Lamborghini Aventador SVJ had departed and I was feeling more than usually ready to reset. So I got up early and went for one of those delicious drives without destination, where the 320d would have no choice but to reveal all about itself and its suitability to our roads. 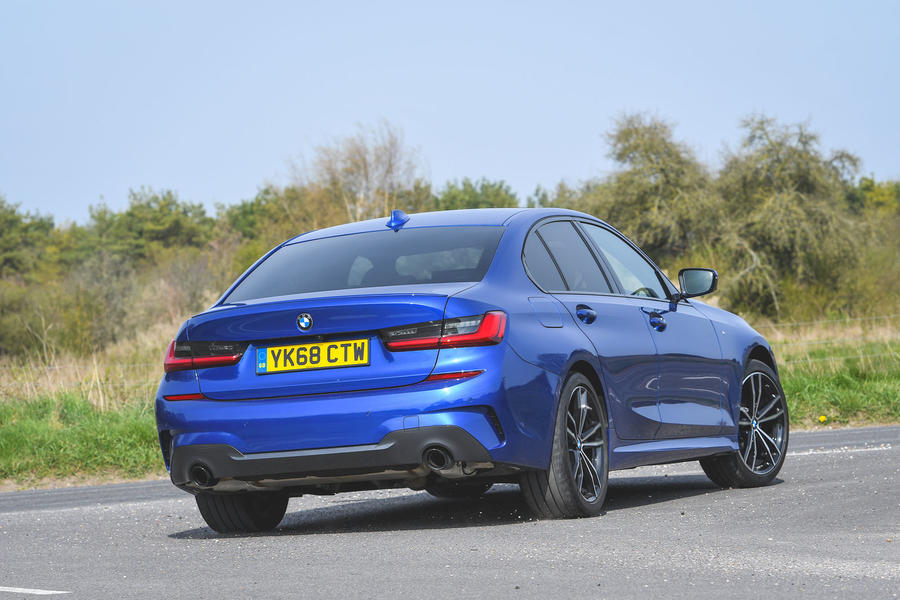 First impressions count and mine were mildly disconcerting. With only occasional exceptions (the iDrive-pioneering E65-generation 7 Series of 2001 springs to mind), BMWs have always come with superbly clear and intuitive operating systems. But the main instrument screen in the 320d seemed needlessly over-stylised, with the primary information for speed and revs registering around the edges, a fairly useless map in the middle and a splat of other data dotted about the rest.

Mercifully the iDrive console remains and is easy to understand, but the centre screen that goes with it has become more cluttered. In time, I got used to it but not once did I prefer it to the system provided by the F30 3 Series.

The car’s ride quality is reasonable at best, too, and that was a surprise. Indeed, it is my strong sense that the F30 would offer far smoother passage from one place to the next than the rather firm G20 that has replaced it. I didn’t mind that so much, just so long as there was a quid pro quo to go with it. But those who are softer of bottom might want to consider an SE model rather than the lower, stiffer M Sport I drove.

And don’t be drawn into thinking that paying extra for adaptive damping will somehow provide a magic carpet that also handles: I’ve tried it on another 3 Series and, even in baseline Comfort mode, that underlying firmness remains. If my primary use of such a car was commuting or long-distance driving, I’d think hard about that.

I’d think, too, about its size, which – surprise, surprise – has gone up again. Almost unbelievably, this 3 Series is wider and taller than was the original 7 Series 40 years ago, and it’s as long as a 5 Series from 30 years back. Small it ain’t. Just don’t expect a limo-like interior: crash structures, thick seats and accommodating all that tech take up a lot of space, and while I’d call it roomy for the class (I’ve done 40 minutes in a current 3 Series with five adults on board who seemed happy enough), you won’t be sprawling around in here. It’s premium economy, at best.

And yet there is something about this car that excites before you’ve reached the end of the street. Some clue to what it might be can be found if you rummage around in the technical details. There, you’ll find that although this car is larger than the last, so, too, is it lighter thanks to increased use of aluminium in its structure and body. Your backside will tell you that it’s more firmly sprung, but the details are interesting: a lower centre of gravity, a wider track, a structure stiffer by 25%, more camber on the front wheels and dampers with special anti-dive and anti-squat technology even if you don’t go adaptive.

There’s something about the 2.0-litre diesel, too, because although its headline power and torque figures remain unchanged, it hauls like the last one never did, and in a way that requires more than a 55kg weight drop to explain. In fact, BMW is reverting to the sequential turbo trick it first used on the 535d back in its E60 days, well over a decade ago. It combines a small high-pressure turbo with a large low-pressure unit to ensure near lag-free response at low revs and a penchant for headbutting the limiter that you rarely find in an oil-burner. With the optional eight-speed automatic fitted to the test car, that means 0-62mph in 6.8sec, which is about the same pace as an original M3.

Which is good, but not half as good as what happens when you reach a corner. Fact is the handling of this car is outstanding. I’ve read elsewhere complaints of dead steering, but unless they’re comparing back to the long gone days of hydraulic racks, I don’t agree: the 320d feels more alive in your hands than any allegedly compact executive saloon has a right.

It has impressive grip but that’s not really the point. What matters is the confidence the car imparts as you aim it into a corner. In so many cars, there is that fraction of a moment when you turn the wheel where you know only what should happen next. By contrast, the journey from entry to exit in the 320d goes always precisely as expected. Unfazed by bumps, undulations, camber or surface changes, it aims directly for where you’ve pointed it. Its body control is at another level to that of any other car in this category I’ve tried. At times, the idea that this level of composure comes in the form of a four-door diesel family saloon seems faintly absurd.

And are we really saying diesel is dead when this one can deliver such performance combined with over 50 genuine mpg in absolutely normal out-of-town driving with genuinely low CO2? It makes no sense to me. 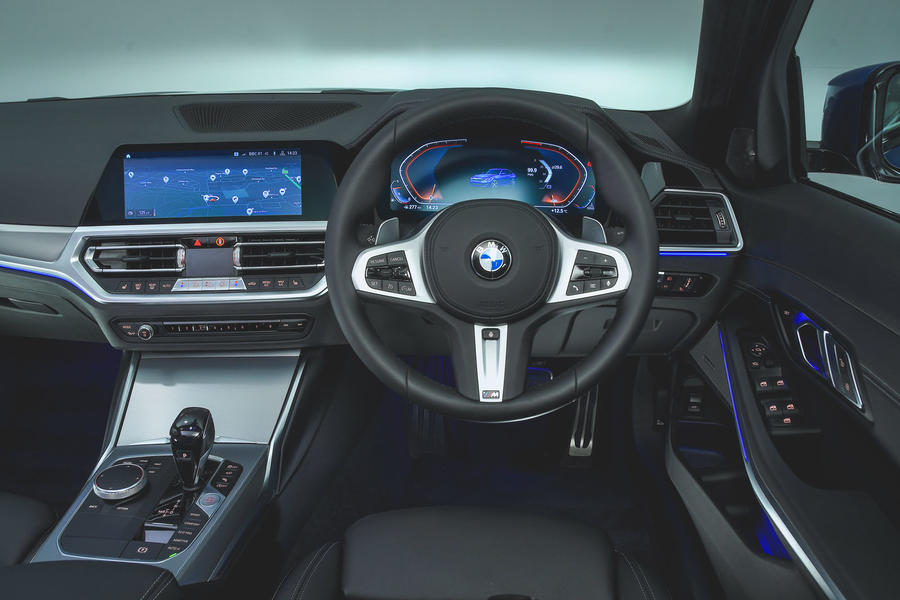 I’ll spare you the sermon and conclude like this. This new generation of 3 Series will likely be more divisive than the last. No question, the ride quality alone will put people off, although I’d like to drive an SE on standard springs.

But, to me, a more iconoclastic, driver-focused 3 Series is an entirely good thing because that’s what the 3 Series always was. The hitherto increasingly indistinct battle lines between it and the C-Class are crystal clear once more, so real choice is available again. The 320d is back at the centre of the universe and doing what it does best.

Some won’t like it but few, I imagine, who are reading this. I recognise absolutely this car’s failings but, to me, they are eclipsed by its ability to engage and enthuse the driver. The Ultimate Driving Machine? For the first time in a while, and in this class at least, the answer is you bet. 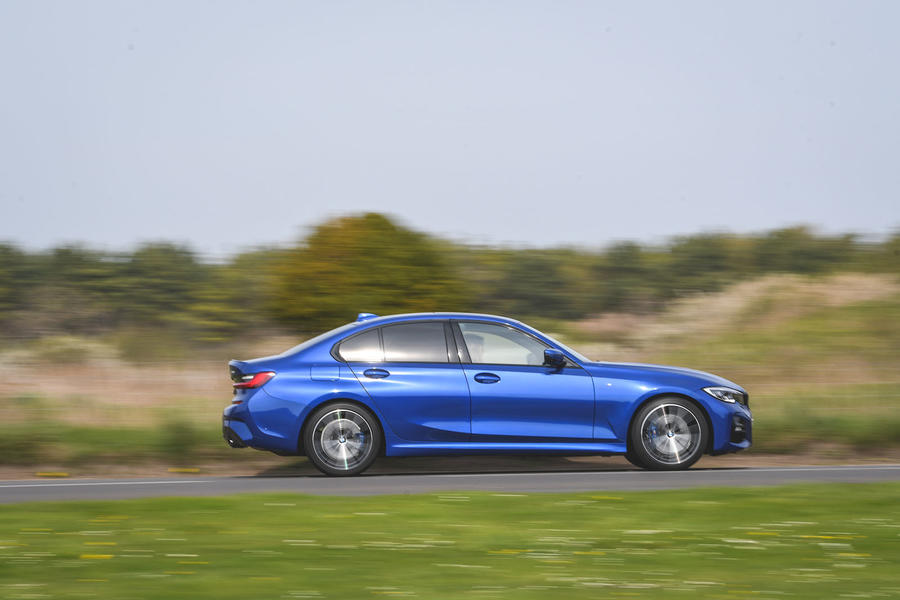 Late to the game i appreciate, but this review is significantly off mark. After owning this car for 8 months i can assure you the steering and accelerator are numb, the ride is rough (something i would happily forgive if i felt the same sensation through the steering wheel) and the automatic gearbox is an appalling slushmatic system that may well get you to 60 in 6.8 with a following tailwind, but can take 1-2 seconds to remember its job and select a gear at the lights or changing down, before taking 5 gears to get to 30mph, and reaching top gear at 50mph (handy for the occasion you want to suddenly accelerate, useless for the fuel economy that rarely tops 48mpg)!!! Needless to say this is infuriating when you finally get fed up with the automatic and try out the daft flappy paddle rubbish.

I use this car for motorways and a bit of B roads, and can assure any potential buyer that both were better in my old 13 reg Seat Leon than in this

I read with interest the review (5 star, no less) of the new 3-Series and all sounded good if perhaps a tad gushy, never mind...

When I eventually reached the data page at the end, I was staggered to see that there are no fewer than 124 versions of the car of sale! One hundred and twenty-four! And I may have made a mistake soewhre: cross-eyed towards the end...

A cat would not find its kittens in that catalogue! Are ALL these versions SO different from each other? ALL 124 of them?

The dash is a mess.  I always liked the BMW big round dials, but these games console look alikes don't do it for me, I guess I am too far past my 14th birthday.  Copying the pig's ear that is the new Merc dash board is not a good idea - OK, it's not quite as bad as the Merc.  Next is the typical BMW twisted driving position - looking at that footwell, it is not cured and may even be worse - what do they expect people to do with their left feet?  Lastly price - at £38k for the basic M Sport, this is looking very pricey, especially alongside the revised Jaguar XE - it is even expensive compared with the new Evoque - which I have priced and specced as a replacement for my 4 Series Gran Coupe - I can get a high spec. (new) Evoque for just under £40k - you won't do that with the BMW and then you can look forwards to £460 a year for five years on VED.