Get used to this: the launch of a new Audi Sport model. The performance arm of Audi is on a quest to double its sales over the next few years, with more models, many of them SUV shaped, and more markets in which to sell them.

Audi Sport is hardly small now. A couple of decades ago as Quattro GmbH, it was the maker of a very small number of interesting, all-weather, fast, four-wheel-drive performance cars for those in the know. Now, the range even before this expansion already runs into double figures, with the gravity moving away from fast estates and into super-SUVs.

Yet if there is a centre of the Audi Sport brand, it is with this, the RS6. Bespoke Audi R8 aside, it has always felt like the flagship as to what Audi Sport can do to Audis. The RS6’s bonkers past most famously includes a V10 engine and has amusingly mixed supercar-baiting performance with practicality over four generations now. It’s Audi Sport at its curious best.

You’ll recognise plenty about this new RS6 from Audi its RS7 sibling, which we recently tested in Germany. Audi Sport’s move into new markets brings us to the US to test the new RS6, a big deal for Audi because, surprisingly, it’s the first time the RS6 has been sold here.

Even by Californian stakes, the styling is no shrinking violet and quite a change over the classy Audi A6 Avant. Only the roof, front doors and tailgate are carried over to the RS6, with every part sculpted to look more aggressive, most notably the flared wheel arches housing the wider tracks and bigger alloys, new bonnet, rear spoiler, and front and rear bumpers. It looks more like a GT3 car than an estate with some of the addenda – and, to these eyes, brilliant.

The looks leave you in no doubt about what kind of engine powers the RS6: a big, powerful V8. Whereas the RS4 has switched from a V8 to a V6, a V8 is retained in the RS6 – and significantly upgraded with a larger turbocharger and increased boost pressure. The twin-turbo 4.0-litre unit produces a colossal 591bhp and 590lb ft and is hooked up to an eight-speed Tiptronic automatic gearbox and a proper Torsen differential-based permanent four-wheel drive. There’s also a torque-vectoring diff at the rear.

The engine itself is now a mild-hybrid unit, mated to a 48V system to boost energy recuperation (see separate story, right). It works for efficiency reasons only rather than performance, not that the RS6 is wanting in the performance stakes: 0-62mph takes a claimed 3.6sec, traction off the line aided by a new launch control system, should you feel the need.

Chassis-wise, height-adjustable adaptive air suspension is standard, the car sitting 20mm lower than the A6 Avant and a further 10mm lower above 74mph. Steel coils with Dynamic Ride Control (DRC), which is an interconnected hydraulic damping system, is included on the range-topping Vorsprung version. (There are three RS6 trims in the UK: the standard £92,750 car with 21in alloys, the £100,650 Carbon Black with 22s and the £109,250 Vorsprung also with 22s.) The active all-wheel steering system from the RS7 features here, as does the option of ceramic brakes over the standard steel set-up that also raises the top speed to 190mph if the brakes are specced on the Vorsprung trim.

There are fewer changes inside than outside, and less added aggression. The seats (very comfortable and supportive) are new, as is the steering wheel, which has larger shift paddles, but the capaciousness of the standard A6 Avant remains. Fido should be kept happy by the 565-litre boot, rising to 1680 litres with the 40/20/40 split rear seats folded flat.

Two customisable driving modes (RS1 and RS2) allow you to pick out the best bits of the standard Comfort, Auto, Dynamic and Efficiency modes that tweak all major dynamic components, including the engine and transmission management, suspension and steering. In the RS2 mode, you can also now turn off the electronic chassis control systems for the first time in an Audi RS model. 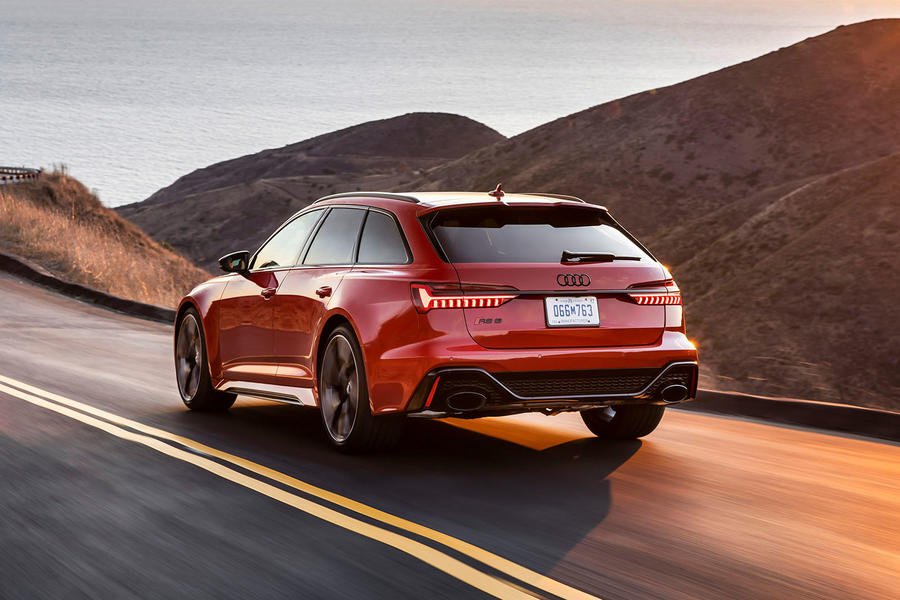 If that seems a rather extensive and complex specification, you’d be right: there are more than 40 ECUs in the RS6 talking to one another. So it comes as a surprise that the RS6 is so relaxing, comfortable and easy going as you roll down the road for the first time.

You’re almost left wondering if you’re driving the same aggressive-looking car you stepped into, such is its refined manner, which leans more towards comfort than sporty. On air suspension, the ride is reasonably quiet and cushioned, and even with large 22in alloys, it manages all but the largest scars and abrasions on the road well, those firmer abrasions causing the body to rock. The sports exhaust, even in the Dynamic mode, is fairly quiet and certainly doesn’t scream 600 horsepower.

Are you sure this is an RS version and not just a faster-looking A6, you find yourself asking? Ah – yes – you just haven’t really squeezed the throttle yet. And when you do, the RS6’s considerable straight-line pace is revealed. It’s not sledgehammer in its delivery in the way that a Mercedes-AMG is, nor raucous in the way of an Italian or British V8, but it’s supremely fast nonetheless. The refinement at low speeds isn’t lost when you push on, either.

The engine is extremely flexible and is happy to be revved all the way to the redline and on a wide-open throttle does finally exhibit aural charm, albeit not at the levels of an AMG V8. It’s your eyes rather than your ears that let you know how brisk your progress really is.

On tighter roads, you can happily use just second and third gear, such is the wide spread of torque and drivability. Gearshifts, whether manual or automatically controlled, aren’t the event they could be, even in the crispest shift mode. The quiet, efficient shift is a good metaphor for the drivetrain as a whole: the RS6 is a machine that likes to make progress in a rapid but ultimately fuss-free way.

It’s much the same for the chassis, which is improved over the previous RS6. It turns in more keenly and feels a good deal nimbler, the four-wheel steering at work here. Yet its sheer size and weight mean it never feels fully at home in slow corners and twisty roads in the way it does in faster, flowing ones. Nor does it ever really exhibit much feel through your hands on the wheel or your backside from the road below.

That sense of feel is improved in the steel-coils-with-DRC-equipped car we also tried, albeit that version lacked the air’s suppleness and gains in the handling were offset by a drop in ride comfort. Whatever the version, this test does leave a lingering doubt that the RS6 may prove to be too big and too complex to drive on UK roads to get anywhere near the limit of its abilities.

Still, the RS6 will definitely be suited to our weather. It is probably the most usable all-round performance car on the market, in that for more than half the year it’s cold and wet and there aren’t many things with almost 600bhp that you’d rather use in those conditions.

When you do floor the throttle midway through a corner towards the exit, the diff will always tuck the rear end in, which adds to the confidence and trust you feel to get on the power early and for the car to find traction, albeit again without that involvement. You’d have to be really pushing it to see the RS6’s playful side and even then it’s not a car that eggs you on to do so or really involves you in the process. You feel it’s showing you what it can do, rather than you controlling it that way. 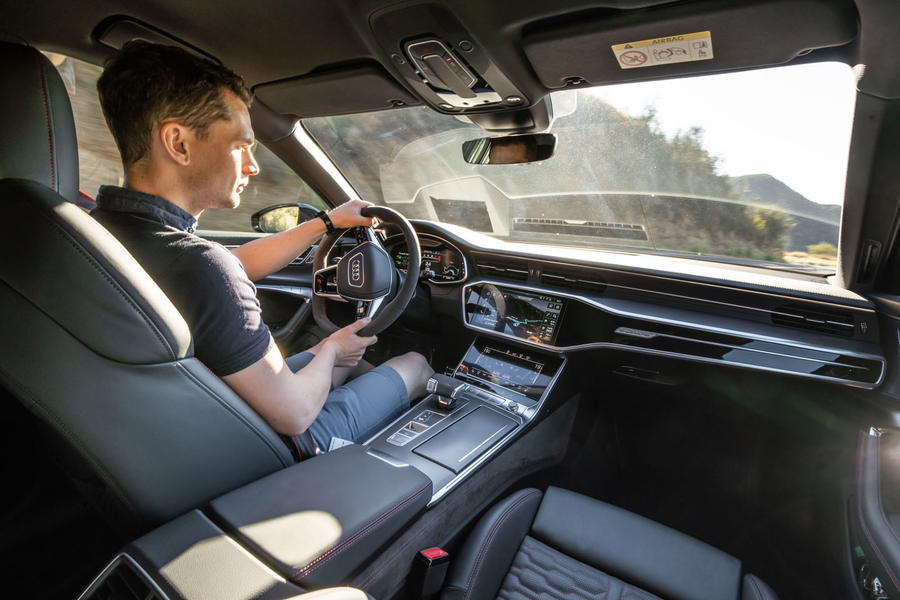 But then, it’s not really supposed to be. The RS6 is a car that impresses you rather than excites you and its key calling card is its sheer breadth of abilities, not just performance ones. Remember, this is a vast estate car that weighs more than two tonnes but has mighty yet undramatic straight-line and point-to-point pace, as well as space for all your stuff and brilliant, relaxed road manners for the 95% of drives when you just want to blend in and get where you’re going.

Its direct rivals – the likes of the BMW M5, Mercedes-AMG E63 Estate and Porsche Panamera Turbo Sport Turismo – all feel more engaging and have greater driver appeal, yet the RS6 feels more usable for more of the time and, as such, arguably makes for the more compelling ownership proposition. Which, you can imagine, is a position Audi would probably take not only for the RS6 but also for all the new era of Audi Sport models to follow. 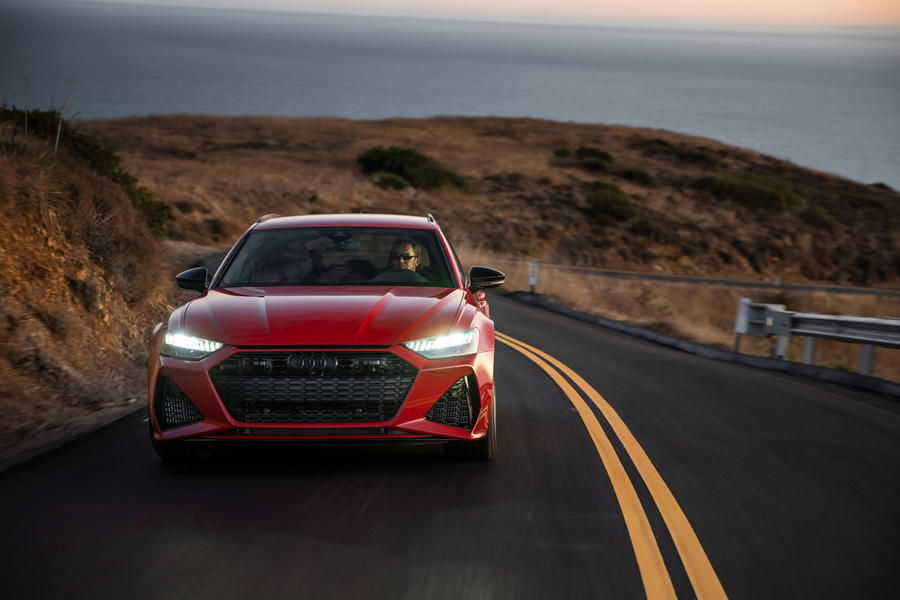 misinformation I would say...(in a way)

Sounds like a decent motor with the same issues as a lot (but not all - granted) of modern high performance cars - no engine/exhaust note to speak of.

I have a serious issue with the 'more usable more of the time' than its rivals point - The M5 is super comfortable in Eco mode and has a big boot so although its not an estate it IS useable in the same everyday way that a 520d is - and an absolute animal with everything turned up to 10.

Comment just in interest of balance - not having driven an RS6 yet however.

It does what it says on the Tin, that we can't deny, but, it doesn't do much more, sure it's fast, quiet when you want it to be, and some won't wince at the 21-22mpg figure, but, this is the icon car, the halo model,and a few won't mind shelling out between £92-103,000 for one, whether we like it or not doesn't matter, there's are car to suit all pockets they used to say.

the RS7 looks alot better especially from the back not just because this is a wagon, but the exuasts and bumpers stick out too far but the spoiler not enough. the porportions on the RS7 are just better in every way, although i would still apriciate one if they give it to me.

Alpina B5 please. Odd that

Alpina B5 please. Odd that Autocar doesn't mention it as a rival.