From £62,9008
Family-friendly version of Audi’s RS5 has landed in the UK and mixes greater passenger space with incredible cross-country pace
Open gallery
Close

A long time coming, that’s for sure. Despite being revealed at the New York motor show way back in March 2018, this is the first time the Audi RS5 Sportback has been offered up to the car-buying masses in the UK. It arrives alongside a newly WLTP-certified RS5 Coupé, is available exclusively in the Audi Sport Edition trim you see here and has the same £68,985 asking price as its two-door sibling.

Even though we’ve been waiting for well over a year for our first go in this elongated, four-door version of Ingolstadt’s fast coupé, Audi has announced that it will make only 250 examples of each bodystyle for sale in the UK this year. Autocar also understands that these 500 cars will be the final RS5s Audi Sport will produce before a petrol particulate filter is installed as part of a wider range update next year. So if you want one, you’d better get a wriggle on.

Until that updated car arrives, though, the technical specification of both variants of the RS5 reads much the same as it did before. The 2.9-litre twin-turbo V6 co-developed with Porsche still sits at the car’s nose and still develops the same 444bhp and 443lb ft as it did before. Peak power still arrives at 5700rpm and that mighty well of torque continues to be spread from 1900rpm to 5000rpm. And, of course, all of this puissance is still sent to all four wheels via a quattro four-wheel drive system. 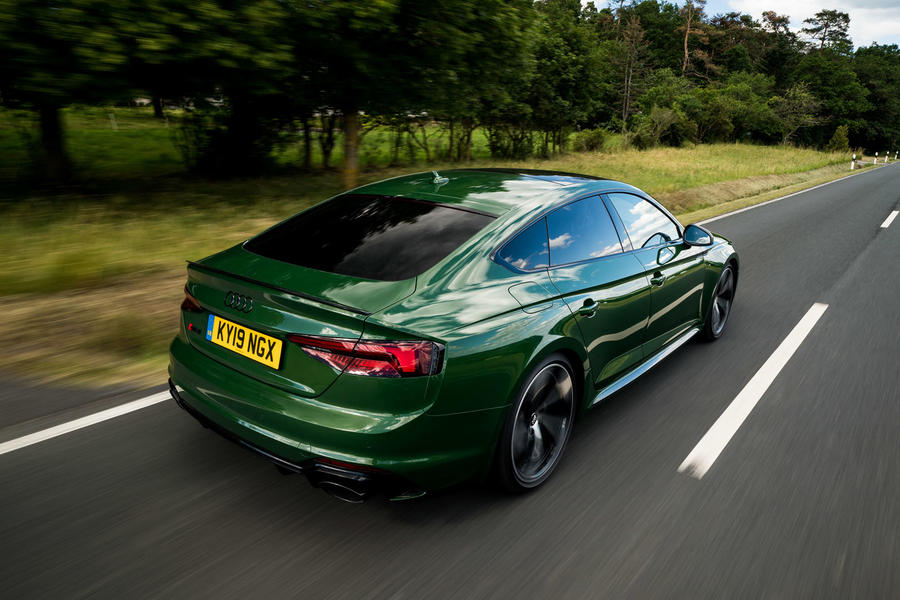 Unlike the occasionally antisocial-looking products from the likes of BMW M or Mercedes-AMG, Audi Sport’s fastest models tend not to look like they'd punch you in the mouth for no apparent reason. Their performance-oriented styling is usually subtler and more conducive to flying in under the radar. But while this RS5 Sportback would likely still come across as the more sophisticated member of a trio comprising a C 63 and an M3, the 20in alloy wheels, high-gloss black trim pieces and louder sports exhaust introduced as part of the Audi Sport Edition mean it can still turn heads.

The cabin, meanwhile, is as smartly appointed as ever and is home to all of the obligatory Alcantara and leather you’d expect from a ‘shporty’ German saloon. Without the new dual-screen infotainment system that’s being rolled out in Audi’s latest models, you might accuse the RS5 of looking a touch last generation, but you’d have to be a slightly miserable individual to make any great fuss out of it. Truth is, this is a nice car to spend time in. And a reasonably roomy one at that - even with that sloping roofline.

But is it a fun one? Over the past few years, the answer to that question as far as quick Audis are concerned hasn’t always been a resounding ‘yes’. A change of tack around the time Quattro GmbH relaunched as Audi Sport is probably partly responsible, when the brand decided it wanted to be known for making ‘premium sport daily drivers’ as opposed to a ‘super-sports firm’.

In any case, the second-generation RS5 Coupé wasn’t particularly memorable for being an engaging, tactile driver’s car. It was damn quick, and incredibly capable on a twisting mountain road, sure. But exciting? Nah, not really.

This new Sportback model can be summed up in much the same way. That V6 engine is impressively responsive and leaves no doubt about the accuracy of Audi’s claimed 0-62mph time of 3.9sec. It pulls hard from low down in the rev range and will continue to do so across a range that’s impressively broad, all the while being accompanied by shifts that are timely and executed with impressive dexterity. Its soundtrack is a menacing, if moderately subdued, growl that’s unmistakably sporty, but comparing it with the old 4.2-litre V8 from the first-generation model remains an exercise in futility.

The steering, meanwhile, is defined by that stereotypical Audi numbness and there are times when it can seem a touch inconsistent in its response to your inputs. Those issues aside, the RS5 Sportback inspires plenty of confidence in its dynamic ability, just not a lot in the way of endearment. But you can’t help but be impressed with just how sure-footed it is when you really push it. On the fantastically twisty roads that snake their way through the hills that surround the Nürburgring, it was devastatingly fast and impeccably composed. Not particularly expressive, but stable, secure and planted. 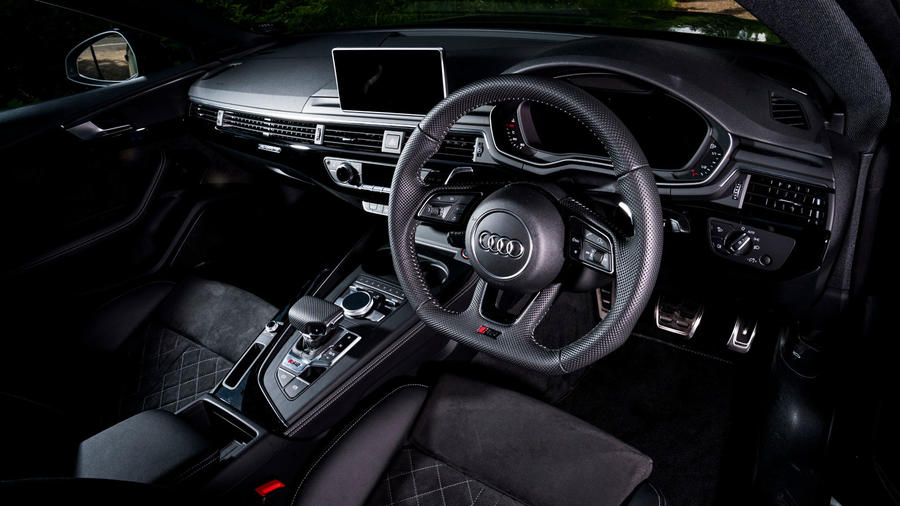 That really depends on what you’re after. If you want a reactive, thrilling sports saloon, you’ll be better served by a BMW M3, an Alfa Romeo Giulia Quadrifoglio or a Mercedes-AMG C 63. If you want a car that’ll just get on with the job of travelling very quickly and very securely with no fuss whatsoever over practically any stretch of road you care to point it down, then the RS5 Sportback has its merits.

I think it makes for a superior long-distance cruiser than any of those other rivals, too. On the drive back to the UK from Germany, it was quiet and comfortable and felt completely at home with the idea of travelling at high speed for a sustained period of time. It also rode well, provided you didn’t find yourself travelling over any particularly scarred sections of Tarmac.

Would I be inclined to buy one? If its steering was more tactile, its handling more playful and its engine more characterful, I probably would. If it could manage all of those things, I think it’d be a wildly entertaining car. But as it stands, it’s a bit too one-dimensional for my liking. 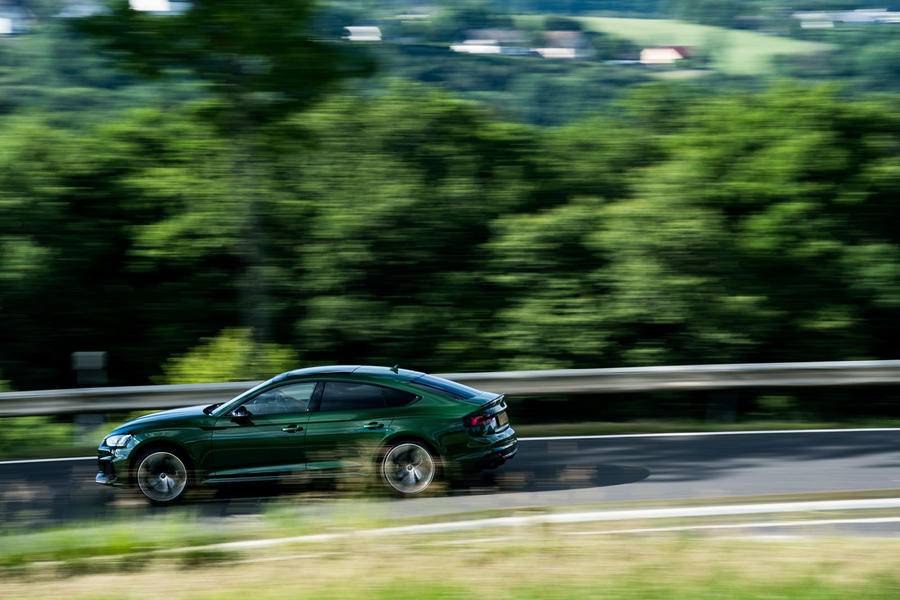 Risky colour for a press car, impressive feat for a car that good on the twisties yet still better than most on the motorways. As for the comments on fuel consumpion, I don't think an extra £200 a year will make much difference to the buyer looking for a sub 4.0 second to 60 V6 £69k 4 door salooon.

totally love this car but i just think it looks a little too chubby and it would be good to have more like 500hp and a more rear biased 4WD system as many people have said it understeers quite alot.