From £195,9508
Late-life changes make the Aston Martin Vanquish S even nicer to drive and put a bit of necessary air between it and the DB11
Open gallery
Close

The Aston Martin Vanquish S is a necessary revision. Aston Martin’s ‘second-century plan’ has just brought us the Aston Martin DB11 – and very nice, so it is – but it still has other cars for sale. You know what we used to say: sometimes they look a bit alike and do alike. Of them all, though, spare the biggest thought for the Vanquish, whose patch the DB11 encroached on most when it replaced the DB9. The Vanquish was Aston’s most powerful series production model and flagship super-GT, and it needs to stay on sale – and stay selling – until its replacement arrives in 2019.

Some at Aston feel it wasn’t totally on-message for the segment anyway. “It was more GT than super-GT,” says Aston. One problem is that the Vanquish’s non-Aston rivals include the Ferrari F12, which is rather loud, rather urgent and rather 731bhp. So Aston has looked to inject a bit more ‘super’ into the Vanquish’s GT mix.

A few tweaks, then. Given that they’ve got quite a lot else on, I don’t know where they find the time, but here it is. Power is up from 565bhp to 592bhp, and while peak torque stays the same at 465lb ft, it’s spread over a wider range. There are new exhausts and there’s more carbonfibre on the outside, including bits that reduce frontal lift, and there are suspension alterations.

I say tweaks, but even the smallest changes are rather in-depth. Front and rear springs are both 10% stiffer and rear roll stiffness is up by 3%, but that’s not even approaching the half of it. The dampers have been retuned so that while the primary ride (body control) is much improved, the secondary ride (over small imperfections) doesn’t take a hit.

Then the engineers started talking through the compression and rebound damping alterations and your correspondent smiled bleakly and nodded helplessly. The upshot is that there’s less understeer than before and the car feels more agile. The steering – still hydraulic – is said to offer better connection and a more progressive build-up in weight. Oh, and they’ve added an S to the name. 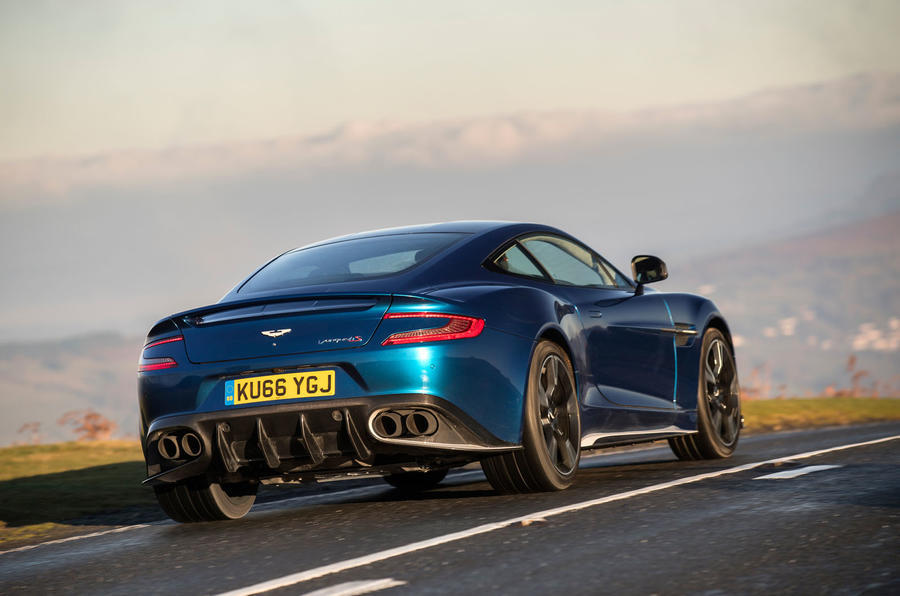 I haven’t driven a Vanquish for a while, but I can tell there’s more noise on start-up. More all the time, in fact, from the 5.9-litre V12. The note is a bit more howly and hollow, although, in three hours at the wheel, I never found it tiring. I rather like it at a subtle 3000rpm upshift or downshift – actually all the revs you need on the road most of the time.

Yes, the Vanquish is still down on the F12’s power, but I can’t imagine the circumstances in which 592bhp is insufficient. Unlike the turbocharged V12 of the DB11, you do have to work the motor a bit to get a huge shove in the back, but it rewards the effort.

The eight-speed auto is the same as before, but there’s a new, firmer coupling between the engine and the propshaft (the gearbox is at the back), which makes gearshifts feel much more urgent, positive and – although they aren’t – quicker. 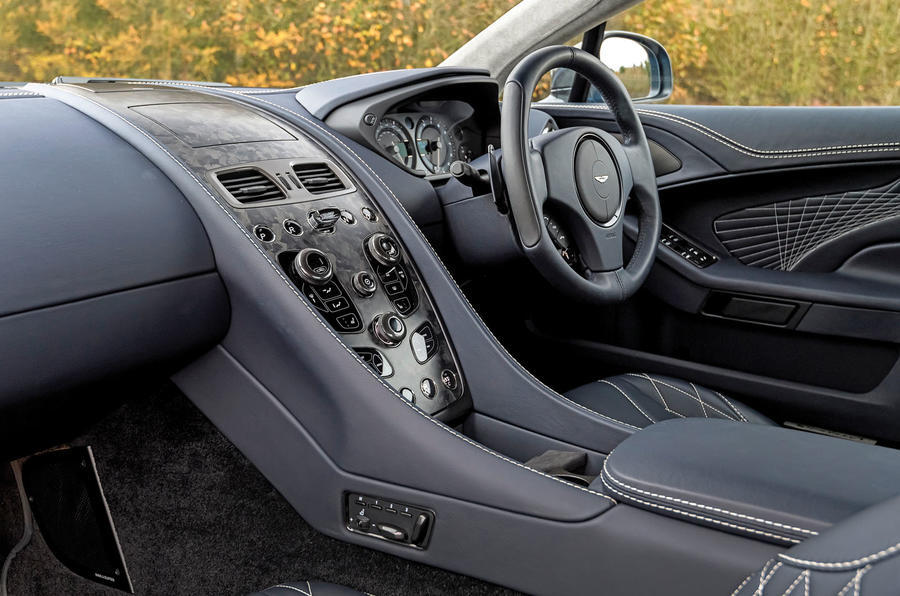 The chassis changes? Subtle, but real. The ride is composed and controlled, a little fidgety on pitted motorways and thumpy across cat’s eyes, but not to an extent you’d complain about. There’s a DB11 if you do. The steering is lovely, albeit delivered via a heavily squared ‘wheel’. These wretched things are the automotive equivalent of having your lunch served on a chopping board or slate which, as juices ooze onto the table, make you question what, precisely, was wrong with the less glamorous but infinitely superior ‘plate’. Still, once you’ve decided which one of its many sides to hold, the feel is great and it transmits messages about what turns out to be a lovely handling balance.

This time of year is a surprisingly good one to test very fast cars; a road covered in more muck and grease than my lunch table the other day (chopping board, see) undoes the efforts to give a car mammoth grip and traction, which you’d never run out of in the dry, and makes a car’s handling limits accessible at sensible speeds.

Whereupon you find the Vanquish S has the ideal balance of the best recent Astons: settle the nose, enjoy the steering as you turn and feel the chassis come alive as you squeeze the throttle on the exit. It’s a gorgeous thing to drive. 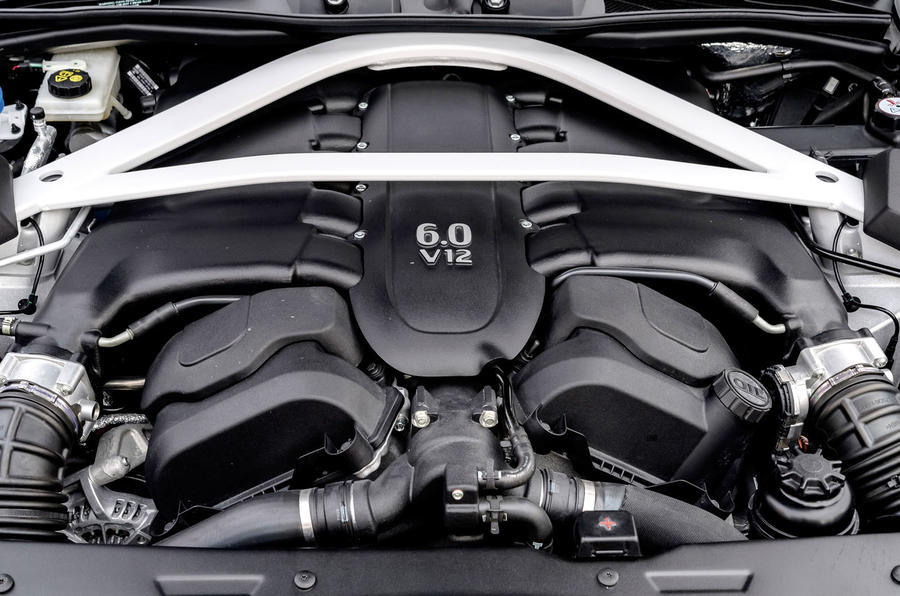 When the DB11 arrived, the Vanquish’s case looked shakier than ever, but these revisions set it far enough apart to warrant a Super GT tag like it didn’t before. Granted, if the DB11 teaches you anything, it’s that old-school Astons feel less gorgeous to sit in these days, but while the Vanquish S is ageing, it’s now doing it gracefully – and there is enough in these changes to tide it over for another couple of years, dignity and appeal intact.

The Vanquish is much more

The Vanquish is much more than "a DB9 by another name." The differences in the structure are very significant (lots of structural carbon in the Vanquish), the bodywork is clearly different (and carbon fibre on the Vanquish), and the driving experience is different. That's not being pedantic, it's being accurate.

On a different note, I disagree that "old-school Astons feel less gorgeous to sit in these days." IMO, they're rather more special and gorgeous than the DB11 is to sit in. The instruments in the Vanquish (and DB9 and Vantage) are gorgeous, and unlike any other cars'. Those who say they're difficult to read -- only the analog speedo is, and the supplemental digital speedo renders that a non-issue. All of the switchgear in the center stack is bespoke, and beautifully crafted. The DB11 has a beautiful interior, but the instrument screens are boring -- they could be in any other car. Worse, the center screen is stuck on the dash like an afterthought. This looks awful in a 40-grand Benz, never mind a 200-grand Aston. And the switchgear is clearly from M-B, nicely done, but not nearly as special.

Why change the name. Call a

Why change the name. Call a Vanquish again. Why bring DBS? They call it a Vanquish 4 years ago. So why don't stick with Vanquish or called V12.Virage.
Citytiger 28 December 2016

and you get the steering wheel from an Allegro, great sense of humour they have at Aston, or is that Austin Martin... ;)
View all comments (5)