From £63,0009
Share review
Last hurrah for the current B4 S Biturbo brings unprecedented athleticism for an Alpina, but it's limited to just 99 cars
Share
Open gallery
Close

The Edition 99 is a last-of-the-line special for the B4 S Biturbo – tiny Alpina’s equivalent to the BMW M4 CS, if you like.

But unlike the BMW, this is very much a limited-series car, with only 99 examples built and the majority already sold – mostly in a flattish grey or spectacular Fire Orange, which recalls the old Alpina-tuned Group 2 Jägermeister 3.0 CSL raced by Niki Lauda.

No matter the colour, anybody paying £73,100 is unlikely to be disappointed with the mechanical specification, even if it is largely unchanged from the standard B4 S.

In short, Alpina takes BMW’s 'N55' 3.0-litre straight six engine and recasts the aluminium block in order to fit a pair of faster-spooling turbochargers. There’s also a higher-capacity intercooler, and both the external oil and water coolers are substantially larger. Software specific to the Edition 99 then takes power from 434bhp to 446bhp and torque from 486lb ft to 502lb ft – a frankly vast figure that promises devastating performance through the mid-range.

Where the standard B4 S gets a stainless steel Akrapovič exhaust, saving 7.5kg, that on the Edition 99 is made from titanium, saving a further 7kg, and there's a matt finish for the four tailpipes. Along with the standard forged 20in wheels and black badging, it’s possible to make the Edition 99 stand out further still with a two-tone paint job and historical ‘BMW Alpina’ decals on the front wings. Just don't forget to bring your aviators.

As with all current Alpina models, there's no manual gearbox option, only a sharpened version of ZF's eight-speed automatic, but this is still a relatively heavy car. At 1690kg for rear-wheel-drive versions, the Edition 99 is no lighter than the standard B4 S and 110kg more than an M4 CS, which uses plenty of carbonfibre body panels. You can factor in a bit more for cars with four-wheel drive, even if the extra traction does drop the 0-62mph time from 4.2sec to 3.9sec. 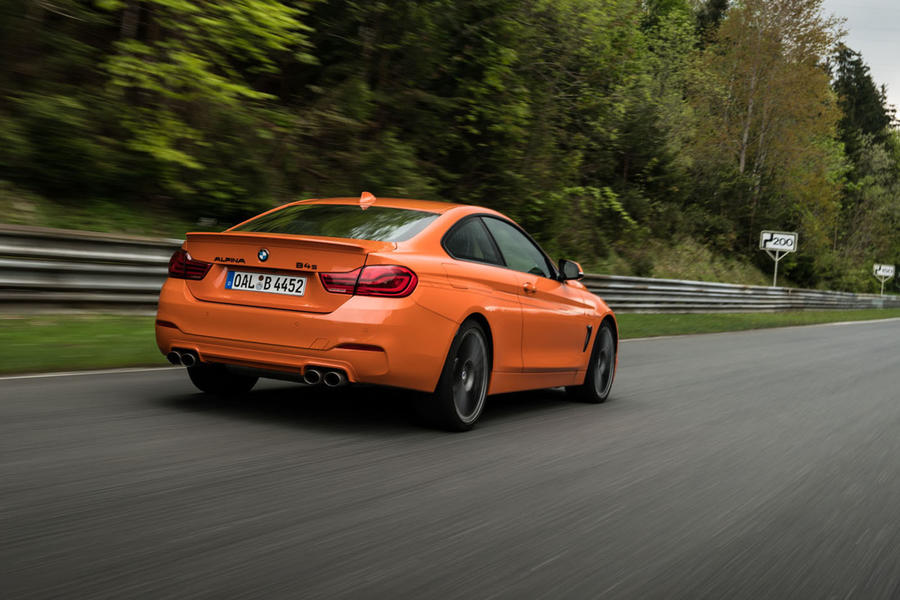 This isn't your typical Alpina fare inside. Instead of quilted cream leather and the like, what you get are the same Alcantara-trimmed half-shell seats found in some more hardcore M4 derivatives, and the traditional gearshift buttons have been replaced with a pair of lovely paddles machined – at great expense – from solid aluminium. The rim itself is also now clad in Alcantara, but through it you’ll see the familiar blue-backed roundels – now feeling thoroughly old-school but all the more charming for it – reading up to 205mph and 7500rpm.

Our time with the car was short, and we were limited to the bumpy confines of the Salzburgring race track. As the Edition 99 is still very much a road-biased machine (ours even has a sunroof), this isn’t by any means a conclusive test, but it does at least give us the opportunity to unleash the car’s rampant performance and experience the chassis alterations.

And that performance, for the avoidance of all doubt, remains a real highlight of the B4 S package. Alpina seems to have creamed off the benefits of forced induction – chiefly an elemental hit of torque through the mid-range – and disguised the drawbacks. The power delivery escalates beautifully and there's very little turbo lag. It's a nicely vocal engine, too, spinning with an increasingly frenzied mechanical rasp that's somehow as civilised as it is hard-edged. In Sport mode, you're also unlikely to miss having a dual-clutch gearbox, because this auto is more than quick enough and almost seemlessly smooth at higher engine speeds.

As for the dynamics, as ever with Alpina, the devil is in the detail, and this applies as much to the driving as it does to the specification. The spring and damper rates are up a touch, but peel open the boot floor and you’ll find an X-shaped brace bolted into the floorpan to reduce flex, and at the front the connecting links for the anti-roll bar are now made of steel, rather than plastic. The combined effect is to make the 99 Edition usefully stiffer than the standard B4 S, and you feel this most through the steering, which also benefits from increased camber. Those first few degrees of travel are reassuringly firm but also wonderfully alive in terms of response. In fact, your connection with the front axle is quite a bit more intimate than the best electrically assisted efforts from rival manufacturers with development budgets several times the size of Alpina's annual turnover. Bravo Buchloe.

Of course, with only subtle modifications to the B4 S chassis, this is still a softer device than an M4 CS certainly, and softer also than the garden M4 Competition. Through the tight opening chicance of the Salzburgring, we're sure those models would pull a car length or so ahead and then again through the third-gear esses that bring each lap to a close. However, the difference would be less clear-cut through the faster corners, because the Alpina's front axle is a model of stability and the overall balance so effortlessly neutral. In fact, the confidence the Edition 99 gives its driver seems never-ending, and no matter how much power you throw at the rear wheels, the car never relinquishes its composure, always adopting tiny slip angles with ease. It's a terrifically easy thing to drive hard, which is a good attribute for any road car.

Surprisingly, a torque-sensing limited-slip differential doesn't come as standard; with more than 500lb ft available from 3000rpm, for exiting corners quickly and neatly, Drexler's unit should be regarded as essential. And while we're at it, if Alpina intends to deploy the paddle shifters on future models, they deserve a more pronounced, engaging action to match their fingertip feel. 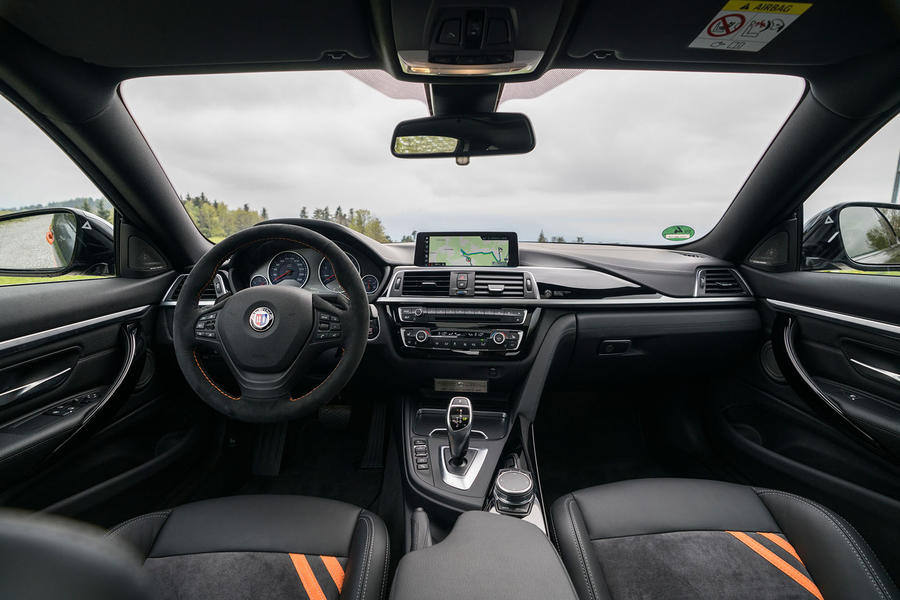 Where does the Edition 99 slot in among the coupé heavyweights of 2019? Can a product that feels behind the technology curve hold its own against the latest Audi RS5 and Mercedes-AMG C63?

We'd argue none of that particularly matters, because in typcial Alpina fashion, there's such an intrinsic, engineering-led feel to the B4 S Edition 99 that having the latest ultra-crisp digital displays and phenomenally complex, multi-mode chassis electronics et cetera simply ceases to matter. It needs no gimmicks, and although the interior is getting on, there's scant wrong with its ergonomics.

Meanwhile, the car's glorious powertrain, benignly neutral chassis balance and, in all probability, unmatched pliancy on rougher surfaces combine to make it very special indeed. As a fast road car you could use every day, in all weather and for longer journeys, it hits a sweet spot for dynamism and refinement. That it also remains a subtle device despite such crushing capability only serves to enhance its appeal.

Don't be surprised if those who buy these run-out specials keep them for a long time. 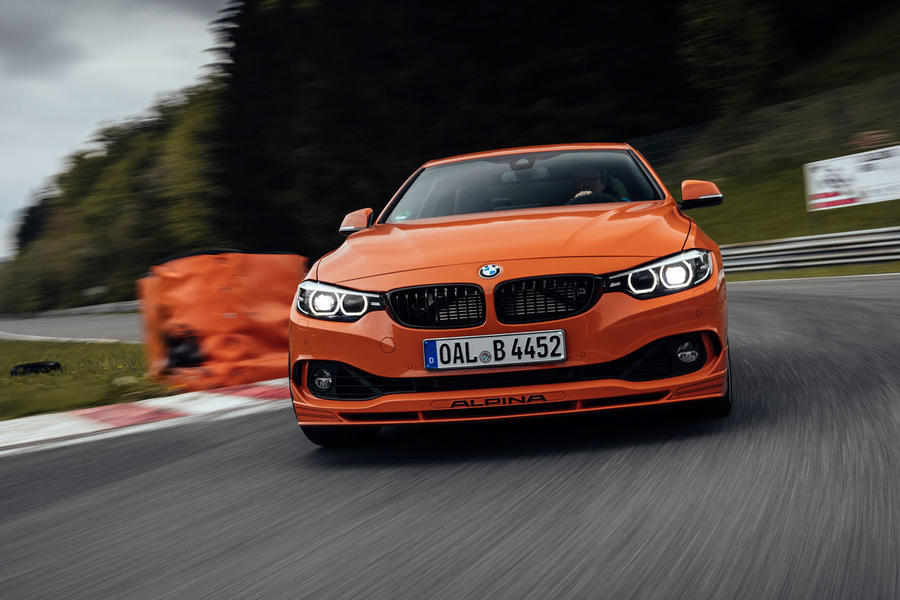 I'd take this over any of the other german brands including Porsche (a lot cheaper than 911). The way that Alpina engineers their cars is to be admired and I'm sure they would be extremely durable. Well written articles too by the way Autocar (this and the one on the B7)

Yep, I like the two tone paint job, maybe it’s the angles the Orange Car was shot at makes it look like it got a large derrière?, I’m not bothered if the interior isn’t loaded with the lastest gizmos, I just want to drive it,and, isn’t that the main thing?.