AC Schnitzer has been modifying all manner of BMW cars since an E32 7 Series conversion labelled ACS7 appeared at the 1987 Frankfurt motor show.

The Schnitzer name actually goes back much further than that, to 1963. Schnitzer Motorsport campaigned the BMW 2002ti as well as the 635 CSi and E30 M3 Group A racers in some of the best-loved touring car championships ever conceived. In 1999 it won Le Mans as a BMW Motorsport works team, running the V12 LMR. Then in 2012 the team returned to DTM with the nightmarish E92 M3 DTM and won the title at the first time of asking with Canadian Bruno Sprengler driving. All in, not a bad record.

But as far as the road cars are concerned, it starts in '87, since when there’s barely been a BMW that AC Schnitzer hasn’t in some considerable way modified. The question is whether there’s ever been a model with less room for improvement than the current darling of the M division line-up: the phenomenally good M2 Competition.

The short answer is that there probably has't, leaving Schnitzer’s mantra of changing what can be improved and leaving what cannot somewhat stuck in the lower gears. However, Schnitzer can't exactly not try, so here we have the new ACS2 Sport.

If the name is familiar, that's because Schnitzer applied it to its take on the original M2, released in 2015. Think of the Competition-based car as the ACS2 Sport MkII. As usual with any of these conversions, it’s possible to take certain elements and leave others. This particular car has everything: more than £25,000 of modifications. The Competition’s twin-turbocharged S55 3.0-litre straight six is now mapped to release not 404bhp but 496bhp, which straight away gives the ACS2 Sport a power-to-weight ratio that even the M4 GTS, with its hugely expensive water injection system and £120,000 price tag, can’t quite match.

That element costs £5110, to which you can add £490 for our car’s repainted engine cover. Add a further £2830 for the sports exhaust, which retains the car’s original particulate filters and electronic valving but uses a new silencer that, being smaller than the standard part, doesn’t droop down beneath the line of the rear valance like a pair of hip-hop pants. The big-bore, matt-finish carbonfibre tips won’t be to everyone’s taste, and you can have chrome or a dark ceramic finish instead, but visually the quality of the work seems very high indeed.

As it does for all the aesthetic changes, though, just so you know, the Sunset Orange paint job seen here is a BMW factory option. Schnitzer adds the front splitter, side skirts, rear spoilers (roof and bootlid) and the rear diffuser, all in carbonfibre. The total cost is £4635, although it’s possible to swap the spoiler for a proper stanchion-mounted wing (£2840), to which they can even add a gurney flap (£130). Schnitzer doesn’t make any claims for downforce beyond the changes being "meaningful".

In the face of all this, the most discernible and potentially controversial change once you're actually on the move seems cheap. Costing £2640, AC Schnitzer’s RS suspension is the first part of the package it honed during a six-month development period. Manually adjustable for bump and rebound, the dampers are tunable, whereas their passive countparts in the standard M2 Competition are not, and altogether this suspension setup drops the car’s ride height by up to 40mm, which is quite a lot. 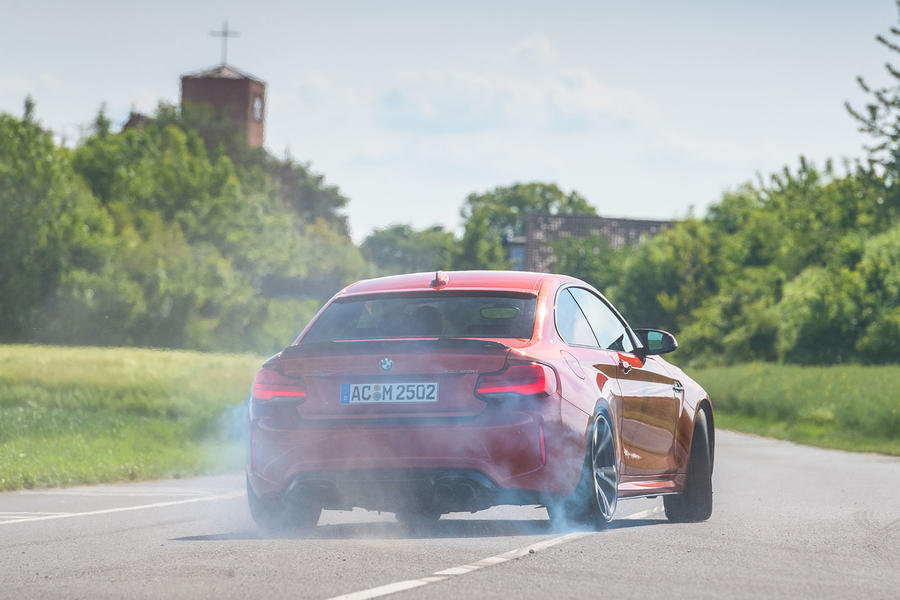 In the metal the ACS2 Sport is a total attention-magnet. The paint helps, but the M2 Competition is already a pleasingly thuggish car at a standstill, and Schnitzer’s version somehow ploughs even more of that into the improbably small footprint. What you really notice is the dropped ride height, which is exaggerated by forged 20in wheels that rise up to perfectly fill the wheel arches. We’ll come back to the wheels in a moment.

Inside, it’s restrained but with touches that – like everything – you can either take or leave. We’d leave the logoed handbrake cover but take the milled aluminium pedals and, possibly, the new gearshift paddles. As plates of thinly cut metal and drilled, they’re a bit Meccano to look at but satisfying to use. Everything else in here is from the factory, including the excellent seats. There’s no cage, no harnesses and almost no Alcantara.

It wasn’t so long ago that a brand new M5 had 500bhp. With the ACS2 Sport, we’re talking about a car not one class below that benchmark but two. And with 480lb ft, Schnitzer's tuned straight six also makes a fifth more torque than the high-revving V10 in the E60 M5.

Does it feel like a car that should accelerate to 100mph in around eight seconds? Not at first, although you can't really accuse the body of writing cheques the powertrain doesn't cash. The ACS2 is freakishly quick in a straight line, although as with the donor car, the engine’s delivery is now so linear that it all seems less dramatic than it might. The engine note – deeper, more booming, louder but more nasal than before  – is also still a bit uniform, although it fires the car to 150mph on the autobahn without hesitation. Is this a 200mph M2? With enough space, maybe.

The way this car handles matters more. The factory M2 Competition offers a terrific base for changes, with rose joints in the rear suspension helping to control the original M2's occasionally unsettled tail. The things you really notice are that suspension travel seems to have halved and the centre of gravity has dropped. It's still no Porsche Cayman GTS, but compared with the M2 Competition, the Schnitzer's character is now fractionally more that of a purpose-built sports car than a quick coupé honed to an impressive degree. In a word, it's tauter.

Feeding into this is the fact this particular car is currently set up for track days, albeit ones you might drive to and from. The dampers are therefore quite a bit stiffer than you'd normally choose for pure road use and there's a greater degree of negative camber at the front axle. The result is two-fold: the car's steering response is more resistive than you're expecting but joyously sharp and precise, and the ride quality on less than decently smooth roads is shockingly bad. You can usually cure the latter either with excessive speed, at which point the dampers begin to flow along nicely, but that won't help you at lower speeds. With the dampers dialled down a touch and on the standard 19in wheels, the ACS2 would most likely ride as serenely as Schnitzer's cars are famed for, but as it is, the chassis chews on potted roads with far too much enthusiasm.

Find a good surface and the ACS2 Sport can show genuine brilliance. It communicates grip levels better than the standard car and resists understeer for longer. It'll still slip into big slides with ridiculous ease and maintain them with excellent yaw damping and effortless balance – to such an extent that the steering tracks the trajectory of the front wheels almost unassisted. The decision to stick the same 265-section rear tyres was sensible of Schnitzer, because going much larger could well have killed the car's playfulness. As it is, the ACS2 Sport can be stroked into oversteer with surprising delicacy. 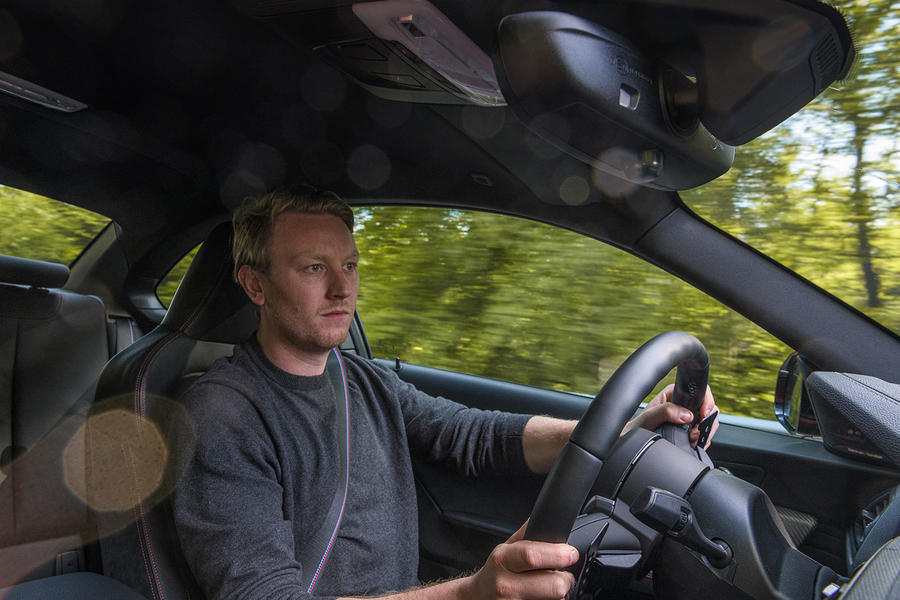 Something to note: AC Schnitzer reckons the standard M2 Competition is such a convincing driver’s car that it would have sold at a healthy rate even were the asking price well in excess of the current £51,030. It would therefore argue that an M2 Competition-based ACS2 Sport – one with a good smattering of modifications, if not all the available options – is still good value.

Another thing to consider is that not only are AC Schnitzer’s changes offered under warranty, but also the underlying BMW warranty isn’t necessarily voided by the new parts or software.

But here’s one more thing: you can buy the new Porsche Cayman GT4 for the price of the car we’ve driven here. Admittedly it’s nothing like as practical as the Schnitzer and won’t feel quite as unique on the road, but that’s the level of dynamic talent available on this budget and it’s a level the ACS2 Sport doesn’t match.

A factory M2 Competition is also a more sweetly rounded car than the AC Schnitzer and would put its softer chassis to better use on British roads.

But none of this is to say there's no place for the tuned car. The engine and suspension modifications work well and add around £8000 to the basic M2 Competition price. If you go with those but keep the 19in factory-fit wheels, you’d be left with a four-seat coupé that's faster than a 911 Carrera S, comes chock-full of character, rides with good fluidity at speed and is well suited for track days, all for less than £60,000. 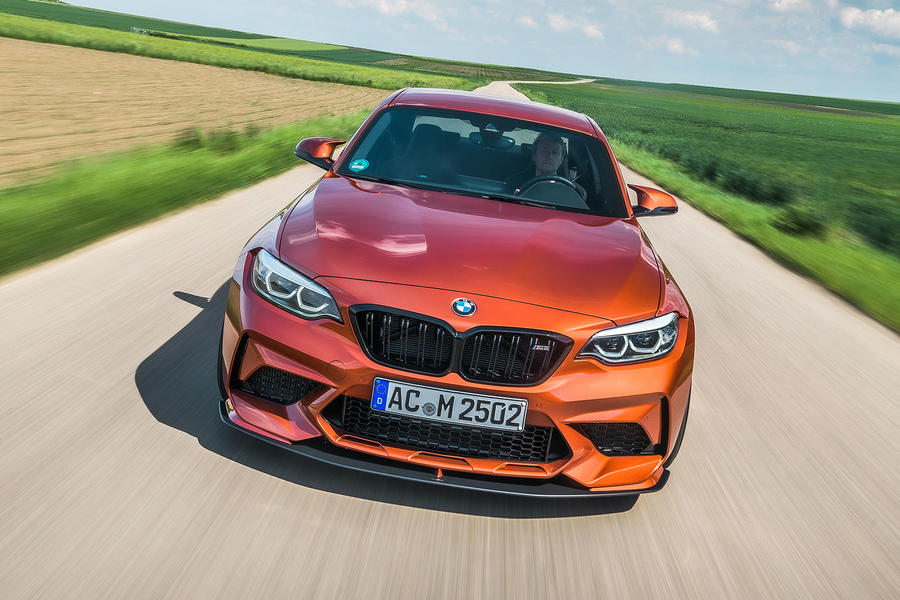 This does look stunning, very

This does look stunning, very purposeful, mad money but that's what having something different or unique is going to cost. Since the m2 is more than fast enough already I'll take a car in standard tune but with the styling mods as I do love the way it looks.
NoPasaran 23 August 2019

All the best to ACS but

The best M2 is the factory M2 Comp. No need for extra spending, the stock car is more than enough already. All the best to ACS, well done, but I am sure they sell very very few of these.

I wouldn't even get the M2 Comp, I would get the stock 1M, it has hydraulic steering rack which I prefer.

No need for a power tune either, the 340hp of 1M is more then enough, it is flighty already, not to speak of even more powerful M2 Comp.

And for the money ACS charges for their car I would absolutely get the GT4, it is just another level in handling, interior and badge.

Agree, buy the 1M (used $50k here in USA) or just take a stock M2 Comp unless you have a passion for after market mods. Whichever way you go its better than an M4 which is a really, really sad statement.

And yes, I’d have one !, I’d live with the bumpy ride, it’s all about the sensations, the big cheesy grin just driving it gives you!, who needs a Radio when you’ve got the Engine sounds to entertain you?!