It’s the most powerful-ever version of the fearsome and famed AC Cobra, the Anglo-American icon that’s been in and out of production for the best part of 60 years. Packing a 580bhp supercharged V8, this muscle-bound slice of 1960s sports car is the latest arrival from a revitalised AC brand that celebrates its 120th anniversary this year.

Following a naturally aspirated 378 Cobra that made its debut three years ago, this Superblower is the new flagship of a range that also includes a recently revealed, and bang-on trend, all-electric version. Like these versions, the Superblower’s chassis and body are built at the firm’s factory in South Africa, before being shipped to the UK, where the drivetrain is installed, the finishing touches are added and the car is submitted for its individual type approval.

While it looks largely like the ’60s original, there have been some significant changes for this latest iteration. For instance, like all Cobra models, the Superblower’s curvaceous body is actually formed from composite rather than aluminium. Purists may be up in arms about this approach (it adds around 20kg to the kerb weight but saves tens of thousands on the list price), but the finish of the composite body is flawless, with lustrous paint and the sort of tight panel gaps that would shame some series production cars.

Another change that’s likely to have the aficionados reeling is that there’s no Ford engine under the bonnet. Instead, AC has chosen the tried-and-tested LSA V8 from the Chevrolet Corvette, the very car that the Blue Oval was out to beat when it collaborated with AC to create the Cobra all those decades ago. Packing a hefty 580bhp and rippling 555lb ft of torque, it drives the rear wheels through a Tremec six-speed manual gearbox and limited-slip differential.

As with the bodywork, installation of the engine is superbly done. It’s a tight fit, but the fabrication on display under the bonnet is first rate, while the plumbing and wiring is neatly arranged. Yet the highlight is a pair of hand-crafted and polished manifolds for the side exit exhausts, which have something of a sculptural quality to them.

More familiar is the ladder frame chassis, largely because it's much the same design as that used on the first MkIV models launched in the 1980s. Formed from four-inch steel tubing, it’s fairly basic in its layout but it’s well finished and gets an extensive powder coating treatment to ward off any potential rot.

The suspension is an update of the MkIV’s too, with independent multi-link front and rear axles that feature Bilstein coil spring and damper units and anti-roll bars front and rear. AC says the geometry and spring and damper rates can be tuned to taste, but our car has been set up for fast road use. Finally, nestling behind the gorgeous, period-correct 15in pin drive alloys are race-specification calipers that clamp ventilated discs all round.

AC has also worked hard on the fit and finish of the interior of the Superblower, and it shows. It’s fairly basic inside (although air conditioning is standard), but it has a special look and feel as a result of its hand-stitched leather bucket seats, a gorgeous aluminum three-spoked wheel and a generous smattering of Smiths dials, which are suitably chrome-ringed and feature white-on-black faces. Only the modern Volkswagen stalks spoil the retro vibe, but they’re well integrated and easier to use than their spindly predecessors.

Weather protection runs to a rather fiddly fabric roof with plastic side windows, plus there’s also a tonneau and AC is working on an optional hard top. Today, however, the skies are blue and the sun is shining, so we go al fresco. 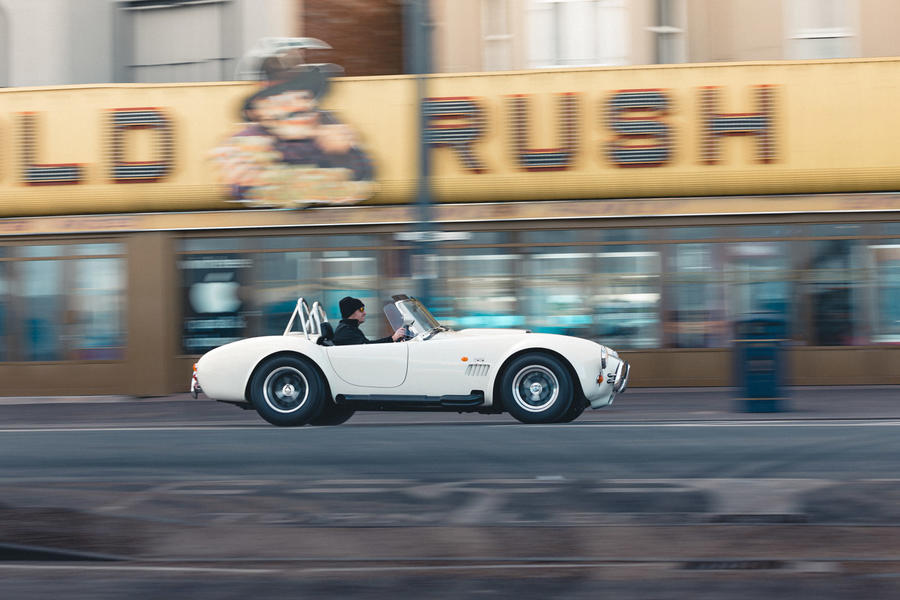 If you don’t grin like a loon the moment that big V8 erupts into life, then a call to 111 for a quick check of your vital signs might be in order. As it throbs away at idle, the supercharged 6.2-litre LSA is the literal heart of the car, sending a pulsing beat through both the car’s structure and your body. Each blip of throttle has the Cobra rocking gently from side to side in time with the bellowing and crackling reports from those side exit exhausts, which are a £3500 option that replace quieter, regulation-meeting pipes that run the length of the car and appear at the rear.

Get moving and you’ll find AC has tried to make the Cobra easier to live with than its illustrious forebears. There’s still no space for a clutch rest, but the pedals have been moved closer to the centre of the car for a more comfortable driving position. The assisted steering is light and precise, making it a doddle to drive around town, and despite there being little more than a windscreen to protect you from the elements, there’s surprisingly little buffeting from the wind, even at brisk motorway speeds.

Equally easy-going is the hydraulic clutch, which has a light and smooth action; and while the trademark long and canted forward gearlever looks awkward to use, it’s actually handily placed and delivers a precise action, provided you’re deliberate with your inputs. That said, with so much muscle on tap, gear changing is arguably an optional extra.

No matter what the gear or the revs, the Cobra just goes, carried along on a colossal tidal wave of torque. It’ll happily pull the long-legged sixth gear (40mph per thousand rpm) from as little as 800rpm, accelerating with an energy that would dust most hard-driven hot hatches with access to their full box of cogs. It makes for effortless yet rapid progress.

Of course you can extend the engine, and when you do, you’re in for a treat. This isn’t a unit that spins to the heavens and has a rev counter with a magnetic attraction to the redline, but it responds instantly to the throttle and the way it relentlessly gathers speed is intoxicating. Overtaking slower traffic is as easy as shooting fish in a barrel, the Cobra creating gaps that simply don’t exist in most cars. AC reckons the Superblower will comfortably crack the 60mph dash in a touch over four seconds, but such is the muscle on offer I’d put money on it being quicker.

Then there’s that noise, the bellowing thunder of a Daytona 500 winner overlaid with the distant whine from the supercharger. Back off and the exhausts deliver a fusillade of cracks and pops as unburnt excess fuel makes its way down the pipes. It’s a compelling, and 100% natural, aural accompaniment, one that has you constantly dancing on the throttle to change the tone, pitch and volume of the mechanical musical accompaniment. 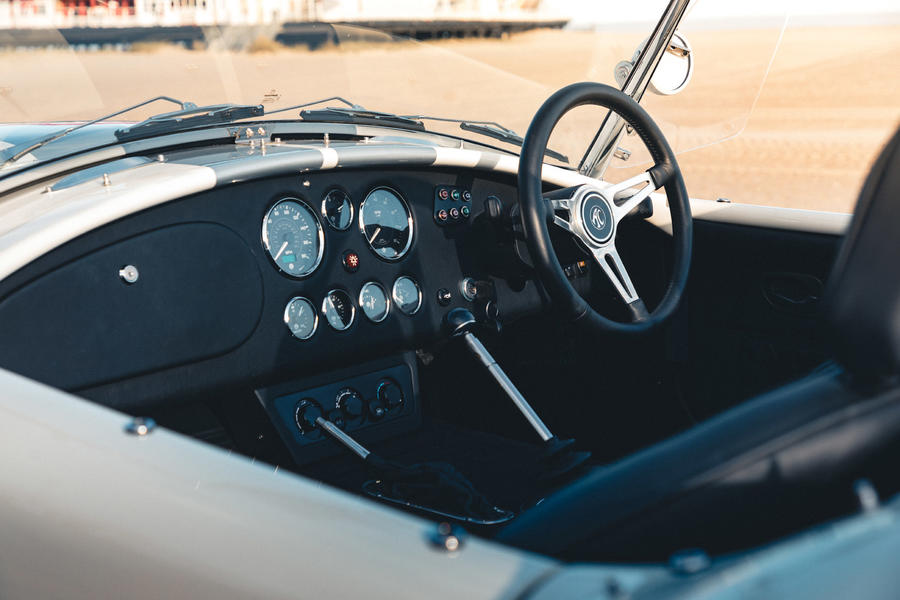 As much as the Cobra will devour the straights with the voracious appetite of a factory-fresh supercar, you have to keep in mind that it’s essentially a 60-year-old design. There’s no problem with the brakes, which are powerful and connected to a pedal with good weight and feel, but it doesn’t corner with the same control and precision as a modern road-burning roadster.

Surprisingly quick and well-weighted steering means the Superblower turns-in smartly, while the relatively soft suspension and massive 295 section of the balloon-like rear Avons result in impressively strong traction. Of course you can get the wheels spinning, but in the dry at least you really have to mean it.

Yet push harder and the Cobra quickly becomes a bit discombobulated, the combination of a little chassis flex, the relatively soft damping and those squidgy tyre sidewalls resulting in some mid-corner vagueness that’s compounded by assisted steering that offers little in the way of meaningful conversation.

That’s not to say the Cobra isn’t huge fun (because it is), or that it can’t cover ground at an alarming rate. Dial back your commitment, ignore the pursuit of highest apex speed at all costs and adopt instead the old-fashioned slow-in and fast-out approach, and the Superblower can demolish the average B-road at staggering speed.

Yet it’s at its best when you want to take it easy and simply revel in the journey. There’s that epic view ahead, the thin-rimmed windscreen framing the long wings and that striped bonnet with its pop-riveted power bulge that covers the LSA’s intake plenum and supercharger, while in your wake you’ll be trailing that glorious, bellowing exhaust note. And all the time you’re taking in the sounds, smells and sights around you – this is total immersion motoring. 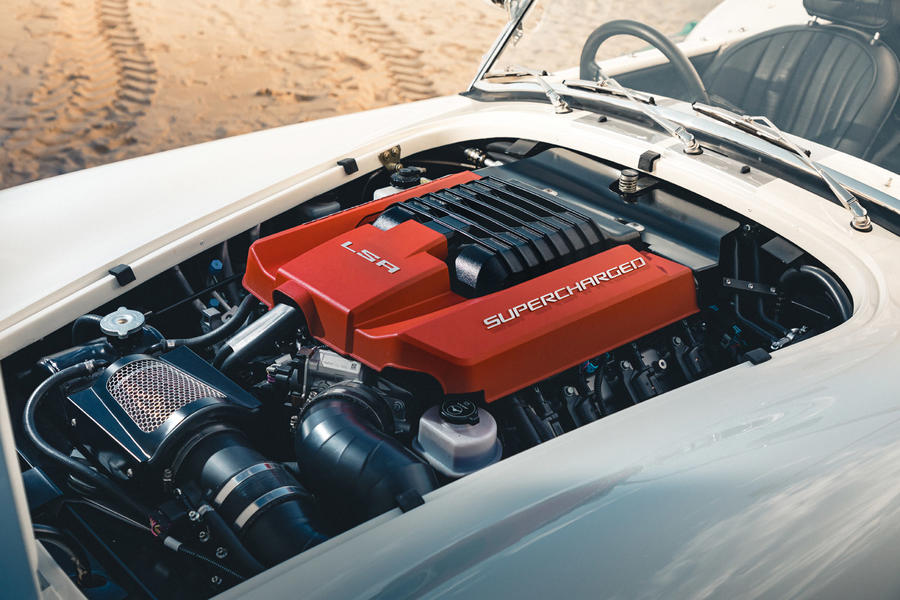 At £129,500, the Cobra certainly isn’t cheap, but it’s also not an outrageous sum for a hand-crafted car that’ll be built in button numbers. The quality of the finish certainly goes a long way to justifying the asking price, and that’s before you start looking at the telephone-number amounts you’d need to buy one of the ’60s originals.

Acceleration aside, the Superblower can’t hope to match modern machines for outright ability or usability, but to judge it by those standards is to miss the point. This car is purely and simply an indulgence, one that will make high days and holidays behind the wheel even more memorable. So let’s enjoy cars like the Cobra while we still can. 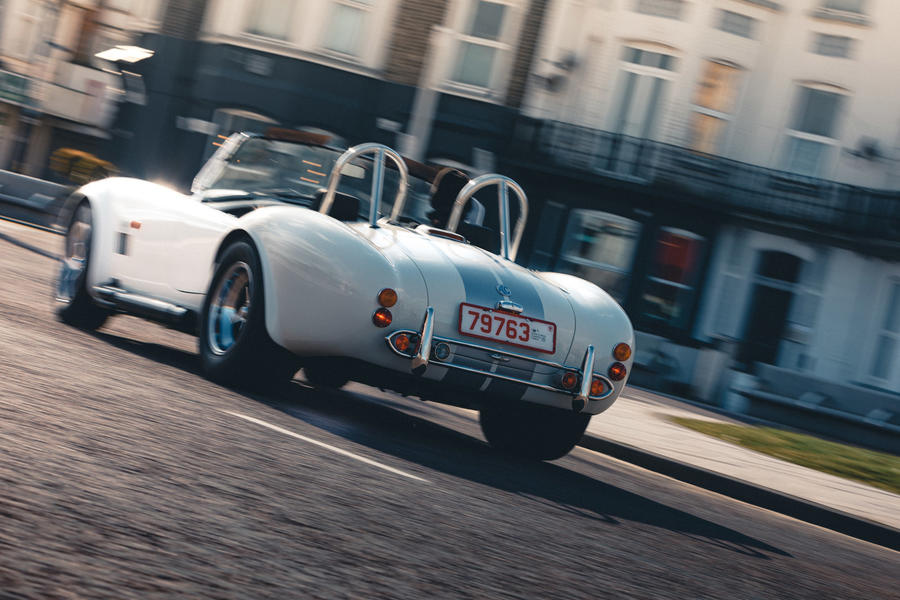 Log in or register to post comments
gareth9702 1 April 2021
What reason is there for buying a fibreglass body and Chevrolet engine at 130,000 when an exact replica with an aluminium body and Ford engine can be bought for 75,000? This may wear an AC badge but it has all the features of a typical kit replica.
si73 1 April 2021
Was surprised that the GRP body adds 20kgs over the aluminium body, and is the chassis better for being powder coated or would it being galvanised have been a longer lasting protection?

Fantastic car though, I can only imagine the noise, although some one up the road owns one, not sure whether it's a classic or a kit, but it sounds mighty either way, and that is this cars only downside, no one will know what it actually is, still if I had £130k ish spare to blow on a toy, then this would definitely be of consideration.

Stunning brilliant, but it's a shame they've dropped the hand-formed aluminium body (not that I could afford one).