BACK TO ALL NEWS
Currently reading: Maserati Quattroporte | Used Car Buying Guide
UP NEXT
Prodrive P25 is uprated Subaru Impreza 22B with 400bhp

For a used car with real soul and an inspiring V8 soundtrack, forget Munich and look to Modena. John Evans has the gen on how to pick a tidy Maserati Quattroporte
Open gallery
Close

Used car buying guides that suggest you look past the usual sporty German fare to alternative stuff, usually Italian, are clearly spending your money and not theirs.

After all, why would you lavish your hard-earned cash on a 2006-reg Maserati Quattroporte Sport GT 4.2 instead of on a proven and dynamically superior same-age BMW M5?

Character, that’s why – and, no, not the kind that means many hours spent at the roadside. True, early Quattroportes are a trifle temperamental but the engines are, save for the odd oil leak from the top, tough and reliable. The body doesn’t rust, either, and although the boot’s soft-close mechanism can play up, the complex electronics behind the fancy Skyhook adaptive suspension on some cars is trouble-free. 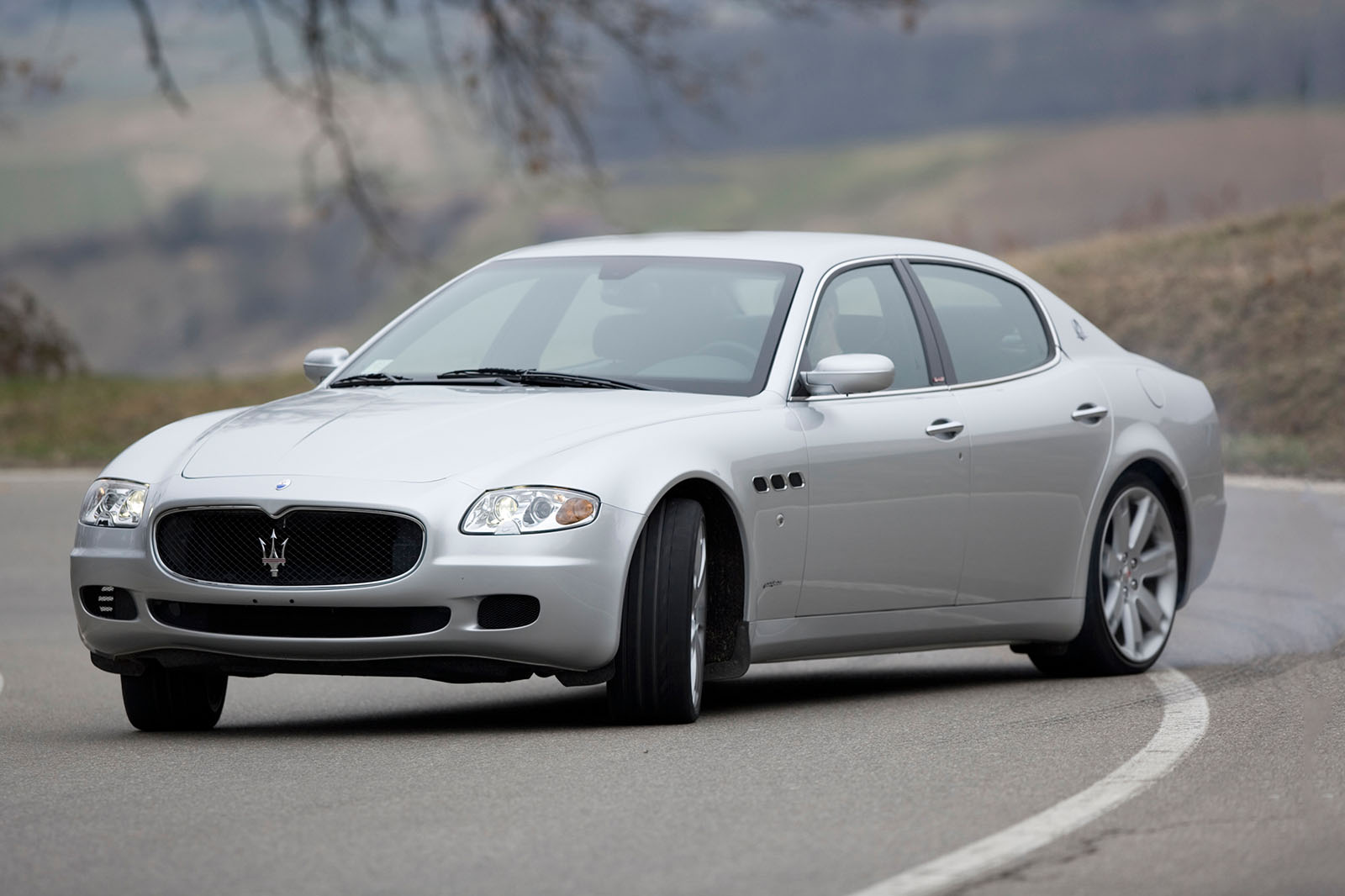 So, yes, character. The kind that comes from a sporty rear-wheel-drive layout with a near-perfect weight balance. From a deliciously throaty V8 making, in 4.2-litre guise, 394bhp at 7000rpm (0-62mph in 5.2sec). And from elegant but muscular styling that still turns heads long after an M5 has ceased to.

This is the Mk5 Quattroporte that arrived in 2004, when it cost from £70,000. It’s powered by the aforementioned 4.2 V8 linked to a six-speed automatic with paddle shifts, called the DuoSelect. Connected to the rear wheels through a transaxle, it works brilliantly in manual mode but is jerky and slow as an automatic.

The following year, the Executive GT and Sport GT models arrived, the Exec featuring wood and leather and the Sport 20in wheels, a quicker-acting ’box and a fruitier exhaust. 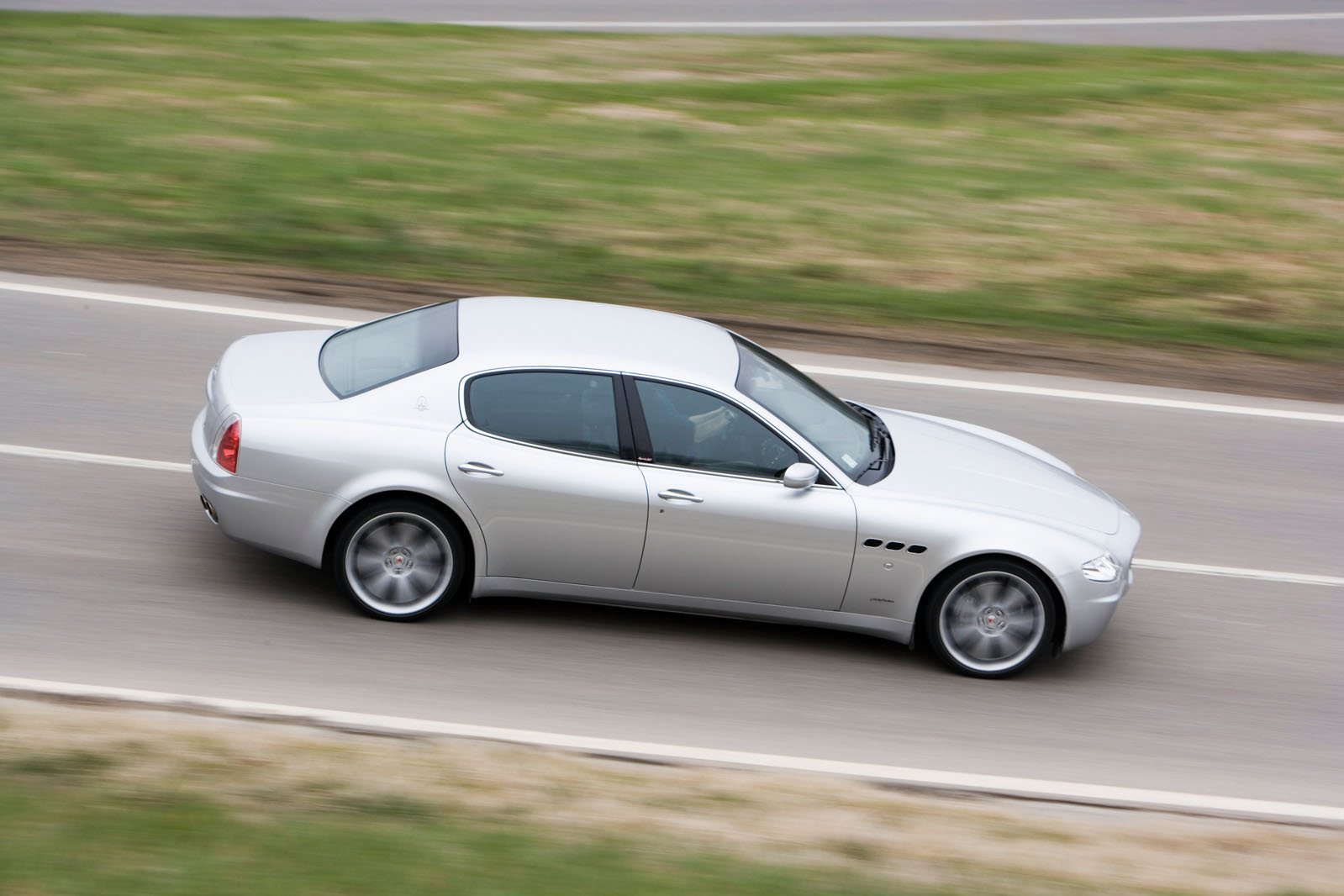 In 2007, Maserati finally offered the Quattroporte with a proper ZF auto. It was a re-engineering job that did away with the transaxle, moved the gearbox closer to the engine and gave the V8 a wet sump in place of the old dry one. The whole plot, suspension included, got a makeover, too, making these cars well worth their premium over earlier versions.

Not that the DuoSelect threw in the towel, because it clung on in the Sport GT, now a much more focused beast – lower, stiffer and with more powerful brakes. Meanwhile, the rare and luxurious Collezione Cento edition featured a pair of 10.4in touchscreens in the front seatbacks and — before this kind of thing became frowned upon — internet browsing via a keypad in the centre armrest.

In 2008, just as everybody thought Maserati had put away the Quattroporte drawing board, the model was refreshed once more with a new grille, lights and wing mirrors and, inside, a redesigned centre console. Not only that, but an all-new GT S version was launched. Power came from a 4.7-litre V8 that produced 433bhp — enough to launch the car from zero to 62mph in a shade less than five seconds. 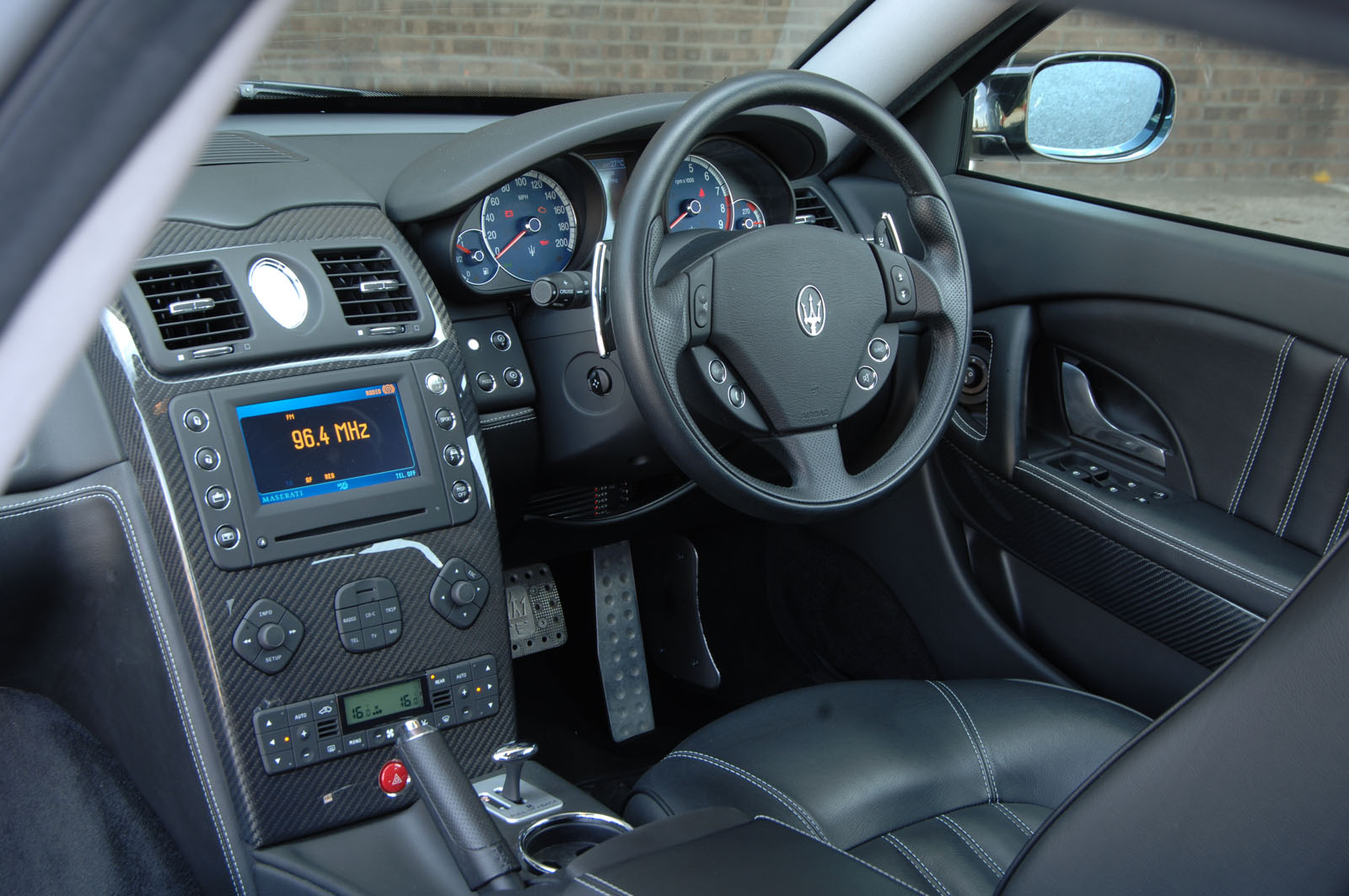 The last Mk5s hit Maserati showrooms in 2013. With prices for good standard 4.2 cars starting from around £12,000, character has seldom looked so tempting.

How to get one in your garage - an expert’s view

“I drive a 2005 4.2 Executive GT DuoSelect with 80,000 miles — and love it. It cost me £5000, but needed the equivalent of £7000 of work. Look after a Quattroporte and it’s sublime. Neglect it and it’ll be a money pit. New, they cost more than £70,000, so they have the parts and labour costs to suit. Brakes, suspension parts… they’re all expensive. That’s the bad. The good is all that character. A Quattroporte has soul and there aren’t a lot of cars you can say that about.” Matthew Sage, Giallo

Check the servicing has been done every 6000 miles. Look for oil seeping past the cam cover gaskets and front crankshaft oil seal. Look under the engine, too. Rough running could be due to a faulty air flow meter.

On DuoSelect cars, rising revs, stalling and gear selection problems indicate trouble ahead. The clutch can last as little as 12,000 miles, especially on pre-2006 cars (it hates stop-start crawls), and is around £1500 to fix. Check the hydraulic gear selectors’ condition. 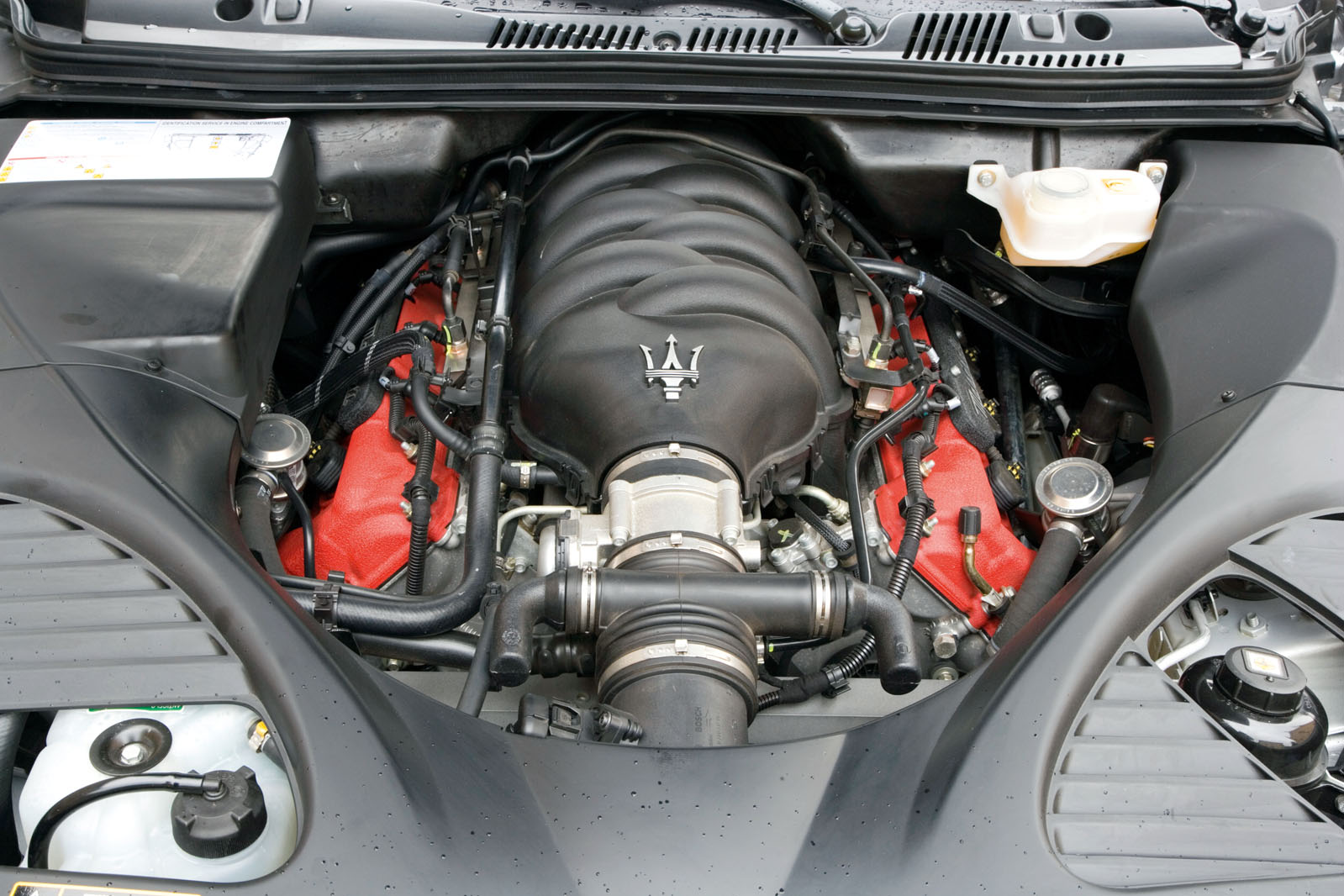 Skyhook electronics are okay. It’s the mechanical stuff on both systems that fails, such as roll-bar drop-links, broken springs and collapsing dampers. Especially on pre-2005 cars, check for steering rack leaks (expensive) and excessive play around the straight-ahead. Look at the condition of the steering pump (a weak spot). Check for uneven tyre wear and, on the test drive, steering and handling finesse. Four-wheel alignment can be easily disturbed.

Generally rust-free but keep an eye out for unrepaired stone chips. Check the condition of the bonnet latch (it can fail) and ensure the powered wing mirrors fold. Gorgeous alloy wheels are easily kerbed. Check the 2006 recall about doors opening spontaneously was carried out – exterior door handles should have been replaced. Make sure the boot’s soft-close function works. 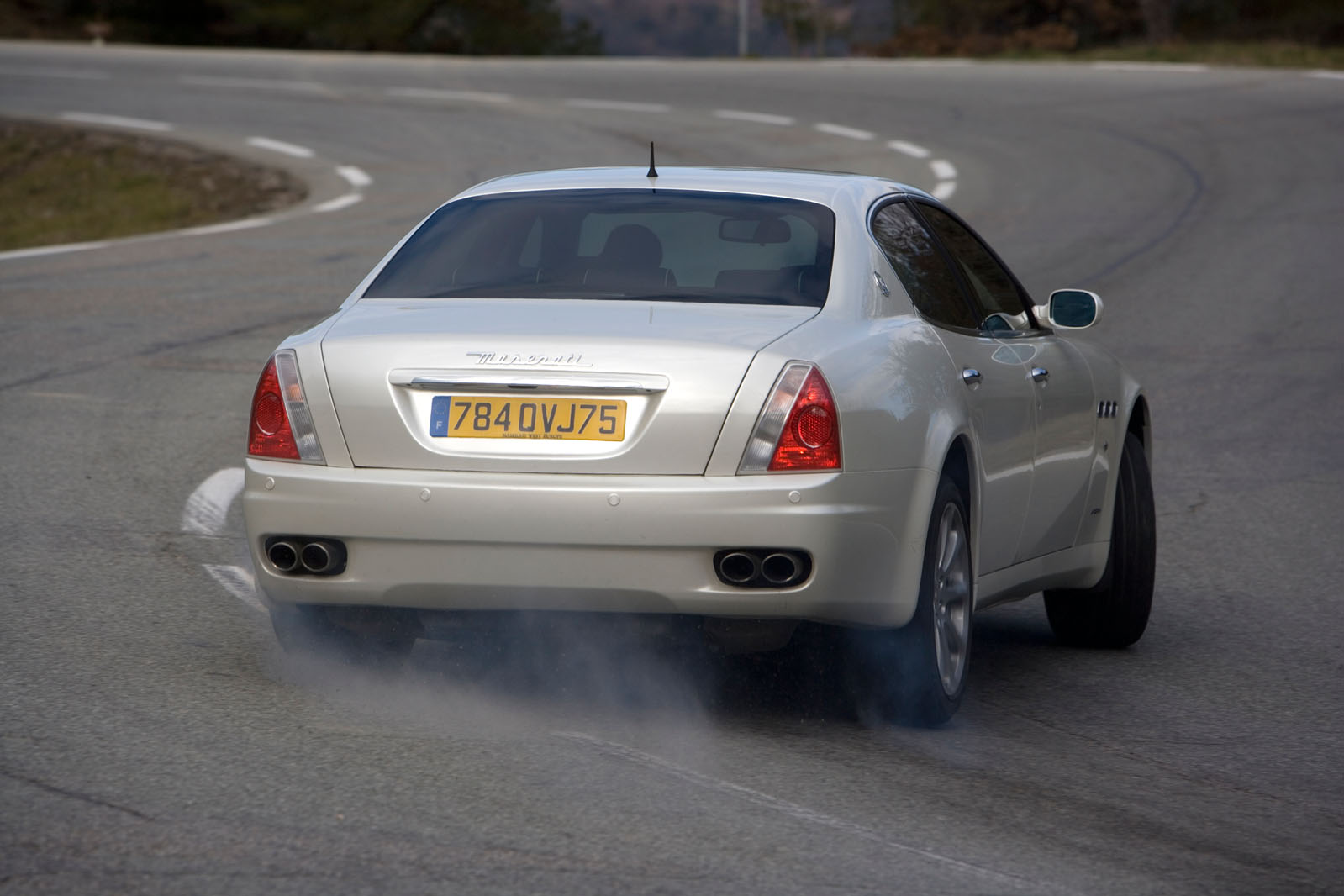 There are two steel covers under a Quattroporte, about 10in x 10in and located either side of the car, inboard of the front jacking points. They cover a section of the brake pipeline channel. They rust badly and quickly but are cheap to replace.

Maserati Quattroporte 4.2 Duoselect, 2006/06, 55K miles, £12,950 Full Maserati service history up to 43k miles and two indie services thereafter. Even so, check clutch change history. Has the Comfort pack, so has massage seats front and rear. It also has a Bose sound system, if that V8 growl isn’t enough.

Basing so much opinion on your uncle's car. The later versions are fantastic looking, fast and capable of doing 150,000 miles with TLC. If you're a decent home mechanic capable of changing plugs/pads/suspension/ oil etc,  know of a decent indepent garage and are smitten with Maserati's then go for it, afterall you can't take your money to heaven.

Bit harsh on your uncle.

I agree on that point,

I'm surprised he had so much trouble when he had a tool like you.

Deeply unrelaible car, My late uncle had the misfortune to buy a low milage 2nd hand Maser which spent so much time in the shop it was a joke: appalling build quality and rubbish engines with preformance myths perpetuated by motoring magazines. Utterly intolerable that journalist cant call these rubbish makes out for what they are.