The Subaru Impreza gets all the attention, but in the mid-noughties more mature enthusiasts, put off by that model’s hard-charging image, might have been tempted by the larger Legacy 3.0R Spec B, in saloon and estate forms, instead.

It was launched in 2004 but here we’re interested in the facelifted version of 2006, because there are more for sale and they were usefully improved. Interior quality took a big leap, the optional five-speed automatic gained paddle shifts and a new drive mode system, called SI-Drive, was introduced.

The grille and head and tail-lights were smartened up while the car gained a more purposeful, sophisticated look thanks to delicately bulging wheel arches, an inoffensive roof-mounted spoiler and indicators integrated into the door mirrors. Alloys became smart 18in, 10-spoke affairs that still look good. The already crisp suspension was retuned (it features inverted Bilstein STI-style front struts) and the steering made a touch meatier.

What went unchanged was the standard-fit four-wheel-drive system with viscous centre differential and a limited-slip diff, and the 3.0-litre flat six continued to make a respectable 241bhp for 0-62mph in 6.7sec (autos take a yawning 1.2sec longer). A manual is clearly the pick but they’re rare. At least the auto’s paddle shifters help maximise what performance remains after the torque-converter ’box absorbed its share.

It’s a real driver’s performance car but, should you push things too hard in the corners, Vehicle Dynamics Control (VDC) will step in to brake individual wheels and straighten the car out. Switching it off gives the Legacy a greater rear-drive bias for a more laugh-out-loud experience. 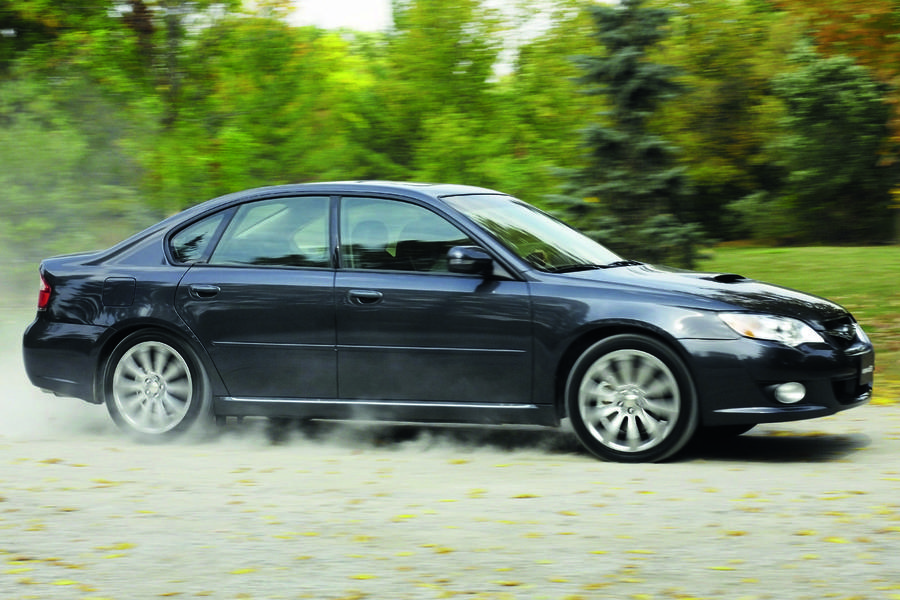 The 3.0R Spec B is a Q-car, then, and no more so than in estate form when its huge boot provides an effective distraction to the main event – namely, surprising other people from the lights. Not that it or the saloon should stoop to such levels. Instead, it’s best treated as a civilised, all-weather cruiser with a touch of hooligan in reserve.

Business car it was not, due to its poor economy and high CO2 figure. Brace yourself for those two, but at least there’s the three-mode SI-Drive system with its economy-minded Intelligent setting that makes this 3.0-litre Subaru feel like a dozy 2.0. It’s operated via a rotary controller and steering wheel-mounted buttons.

Cars priced below £5000 tend to be UK-registered examples with high mileages. However, if their service histories and unmarked interiors (even the leather seats show little signs of distress) are a guide, they tend to attract caring owners. From around £8000, lower-mileage Japanese imports heave into view. They look bright enough and, assuming they’ve been prepped to satisfy UK regulations, are well worth considering as a less lairy but no less accomplished alternative to the ubiquitous Impreza. 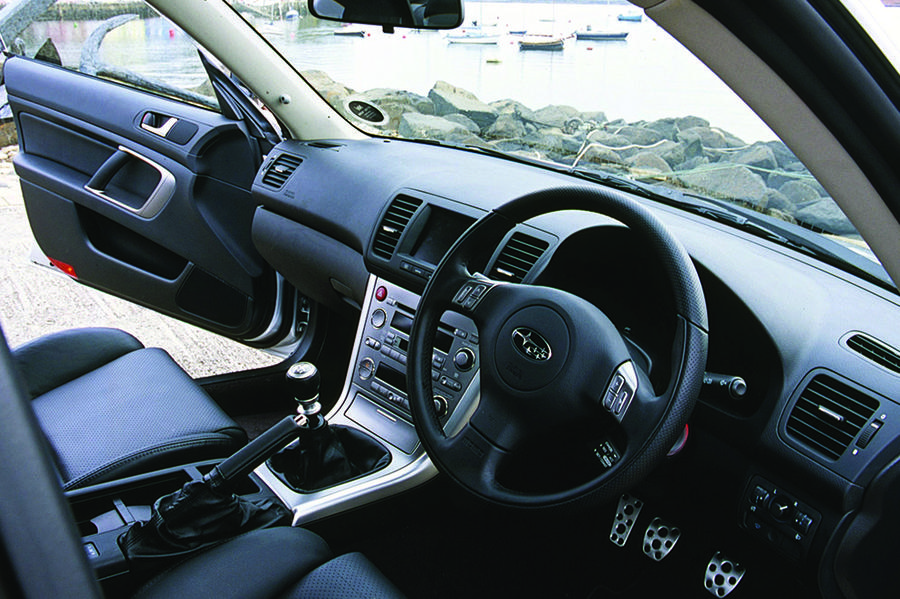 Mark Harris: “I’ve had my Legacy 3.0R Spec B estate for nine years. My wife was against an Impreza so I bought the next best thing. It’s a 2006 auto and with 173,000 miles. It’s been extremely reliable. I’m fussy and change the oil every 7000 miles, and the gearbox and diff oils every two years. The engine is bulletproof. I was told Subaru turned down the power so the Impreza wasn’t overshadowed, so it’s fairly unstressed. I’m the one suffering stress: road tax is £500 and economy rarely goes above 25mpg.”

■ Engine: Check for leaks from the front timing chain case and the lower part of the engine. Misfires may be due to the most inaccessible pair of spark plugs not having been replaced in years, so try to check their condition. Inspect the head gasket for leaks and inside the oil filler neck for emulsified water and oil. Check the external coolant pipes for corrosion, especially on higher-mileage cars.

■ Transmission: Generally reliable but in any case feel for worn synchros on manuals and hesitant changes on autos. Also on autos, check that paddle changes are instant. Drive a few cars to gauge normal levels of drivetrain noise, although driveshafts and centre shafts are fairly trouble-free.

■ Suspension: With the car on a ramp, inspect the condition of the front track control arm bushes. The model goes through the rear bushes on the front wishbones, so inspect those, too. At the back, the front bushes on the rear trailing arm can tear but may still pass an MOT. Subaru OE replacement bushes are perfectly good. 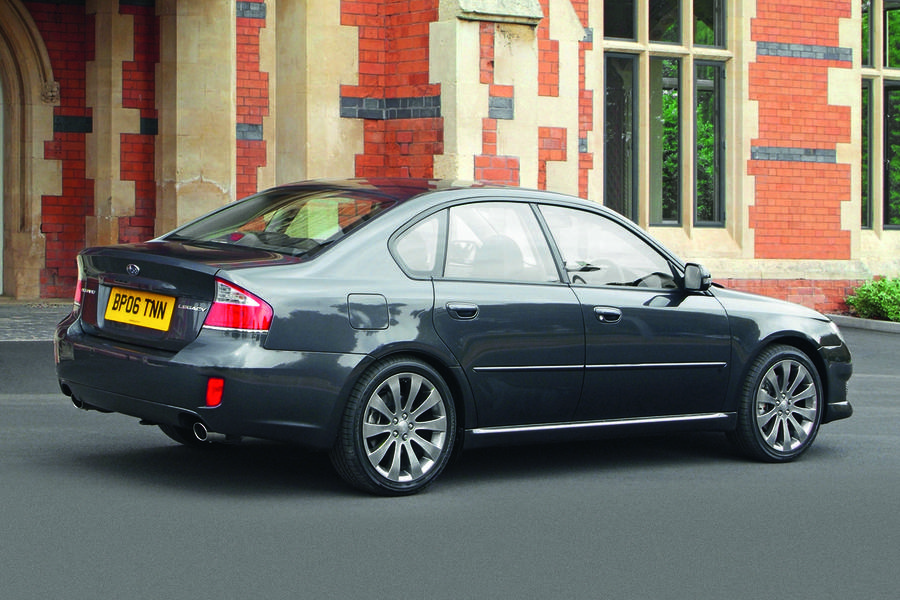 ■ Brakes: The front, sliding calipers are prone to seizing. The rears tend to give little trouble.

■ Bodywork and chassis: Resists corrosion well so any you do find is probably repair related.

■ Interior: Check the SI-Drive system scrolls through its driving modes, and on the test drive feel for clear changes in character between each mode (Sport Sharp should be a world away from Intelligent mode).

All the specialists agree that the Legacy’s Achilles heel is the exhaust’s Y-shaped centre section, which rusts and starts blowing. A replacement section is expensive but, fortunately, if it’s not too far gone, it is repairable. 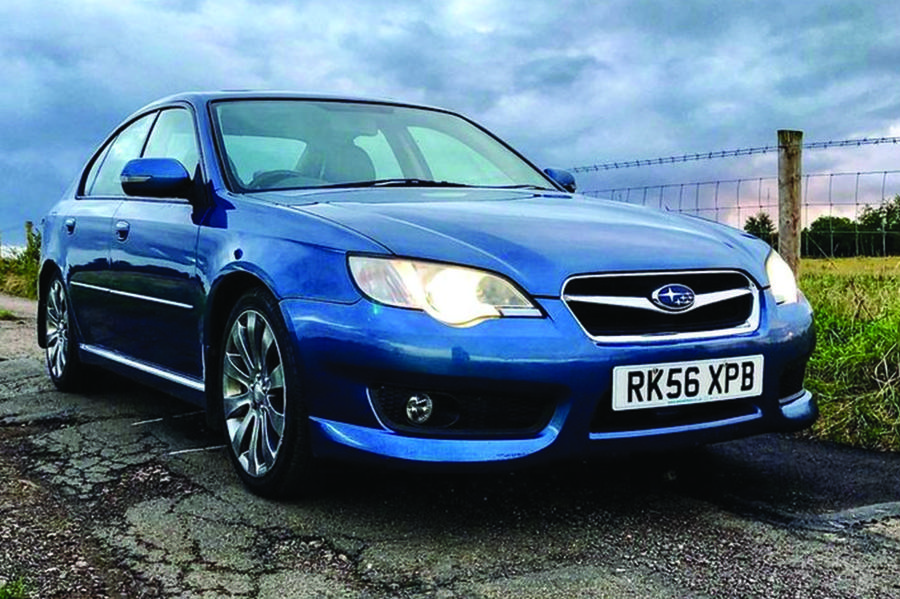 Subaru Legacy 3.0R Spec B, 2006/56, 92,000 miles, £3995: Nice 3.0R in the right colour and with full history, black leather trim and a tilt and slide glass sunroof. At this distance it looks to be a wonderful example of this highly underrated model.

I had a manual 2006 (pre Si) model which I loved and am occasionally still tempted to buy another as a beater.

Problems have been well-highlighted in the article, but become major considerations on a now elderly car. The subframe / engine drop required to change the spark-plugs was a killer for me. Tax was brutal. Engine was great but frequently enjoyed a very heavy drink. Y-section of the exhaust corrodes and replacements are quite pricey. Quite hard to find people with expertise to work on them too.

Having said that, on the right road with the H-6 singing away it was a properly fun car with serious grip.

Biggest problem with these is

Biggest problem with these is they are getting old now - and it's a shame Subaru don't make anything similar.

A blast from the past, from a

A blast from the past, from a time when Subaru sold appealing cars in the UK. I tried one at the time (a manual), and it didnt feel as quick as the numbers implied. Still a really nice car. If only such things were still available.