If the prospect of owning a good Mazda MX-5 Mk1 is fading as prices rise, how about a Mk2 one instead? True, it’s not as pretty and it has an even worse reputation for rust, but as the years roll by, it seems less bland, while a wire brush and lashings of Dinitrol anti-rust proofing should keep the worst of it at bay.

If Volkswagen ever thought launching a new Volkswagen Golf was tough, launching a new MX-5 must have been harder still for Mazda’s dutiful executives, still reeling from the success of the original. Of course, it could never be a straight copy but, even so, the absence of the Mk1’s pop-up lights – a move forced on Mazda by US safety officials – was a blow. A bit like when BL was forced to replace the MG B’s traditional chrome bumpers with ugly rubber affairs.

Still, what else were you going to buy back in 1998, especially since word was that the car possessed the same sweet, rear-drive handling, delicate steering and crisp gearchange (plus some extra kit including a heated glass rear window) that had made the Mk1 such a winner?

Twenty-one years later, these very qualities continue to attract second-hand buyers, especially now that prices for Mk2s begin from as little as £350 for runners with an MOT. In fact, they don’t really go any higher than £3500 for the best cars. In part, they’re held back by the Mk3, which kicks off at around £2250 but also by demand for clean Mk1s. You’ll easily pay £6000 for a good one of those. 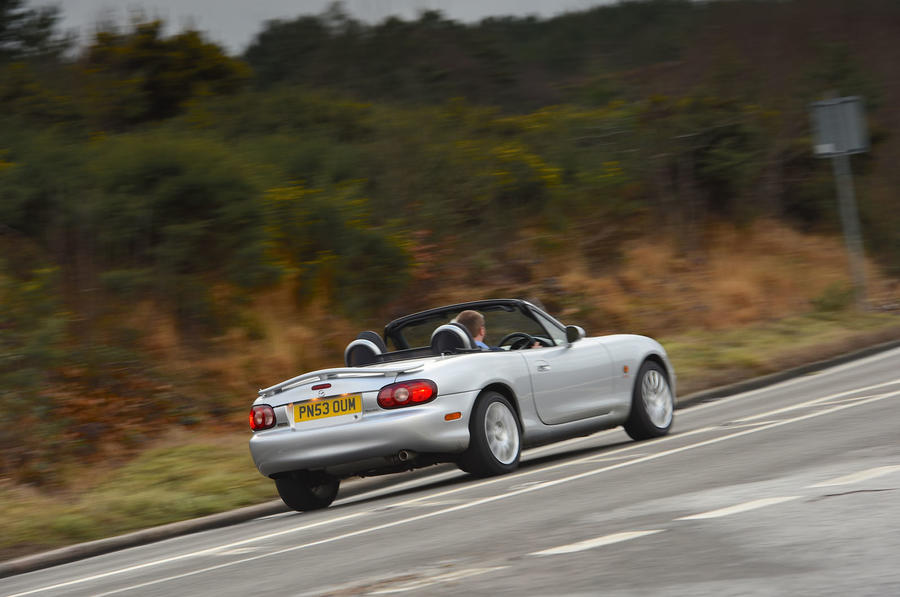 Condition and not age or specification or size of engine is key to valuing a Mk2. You’re just as likely to find a tatty but late-plate 2004 1.8i Sport for a few pounds as you are an early but bright 1998 1.6 for a few thousand. Those two engines are your lot. The 140bhp 1.8 Sport had a Torsen limited-slip differential and 15in alloy wheels.

Cars dating from the facelift of 2001 are known as Mk2.5s. It was a mild affair, the biggest change being the headlights, which now had three bulb chambers. The front bumper also gained a couple of foglights, or mesh grilles if the trim level didn’t permit them. An automatic gearbox slipped onto the price list but missed the point and is rare today. The 1.8i S gained larger, 16in alloys. 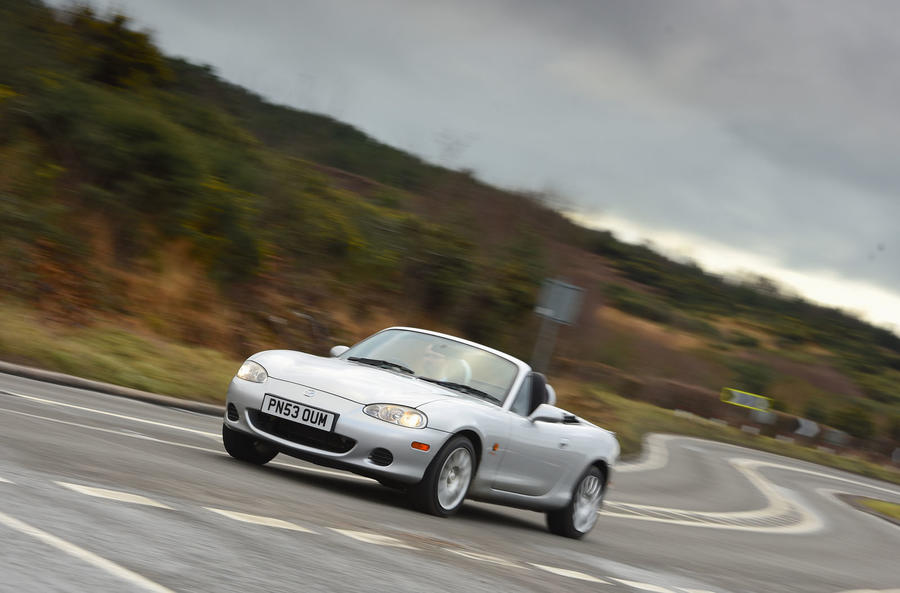 However, standard, Sport or special edition, it doesn’t matter. Condition is king and until you’ve crawled around the car testing the sills with a magnet and lifting the carpets checking for damp, there’s no point getting excited about the specification. But by all means get excited about how it drives.

Ashley Martin, The MX-5 Restorer: “I know Mk2 MX-5s inside out, literally so, due to the cavity rust issues afflicting them and Mk1s. We do a really thorough repair job on the cars. I own a Mk1 and a Mk2, both 1.8s, and love them. I’ve driven a few Mk3s but there’s something about the earlier cars. They just want you to have fun. There’s a huge and growing following for both, with the Mk1 still the most popular. The trouble with the Mk2 is that it’s not a question of if it will rust but when. They are cheap, though.” Buyer beware… 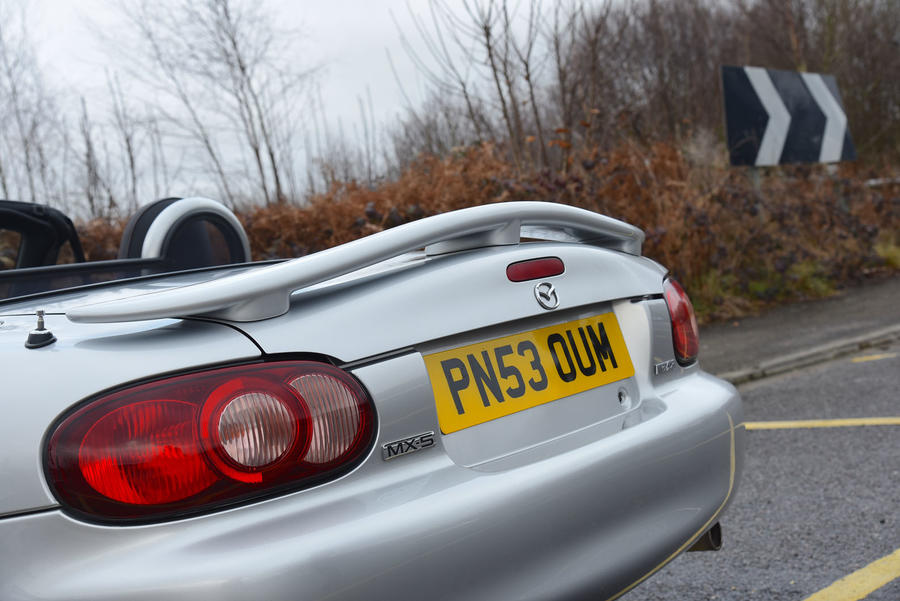 ■ Engine: Cambelt should be changed at 60k miles. With luck, the water pump will have been changed at the same time. Check for oil leaks from the cam cover (not serious) and listen for misfires caused by the coil packs. (There are two.) HT leads routinely break down.

■ Gearbox: On the overrun, a sound like marbles rattling in a tin is gear lash caused by the gearbox being misaligned when being refitted after, for example, clutch removal. Many garages don’t realise it has to be aligned. Later cars got a rubber damper. The later, six-speed gearchange is not as quick as the five-speed. Listen for failing propshaft joints (they’ll squeak), especially in reverse. 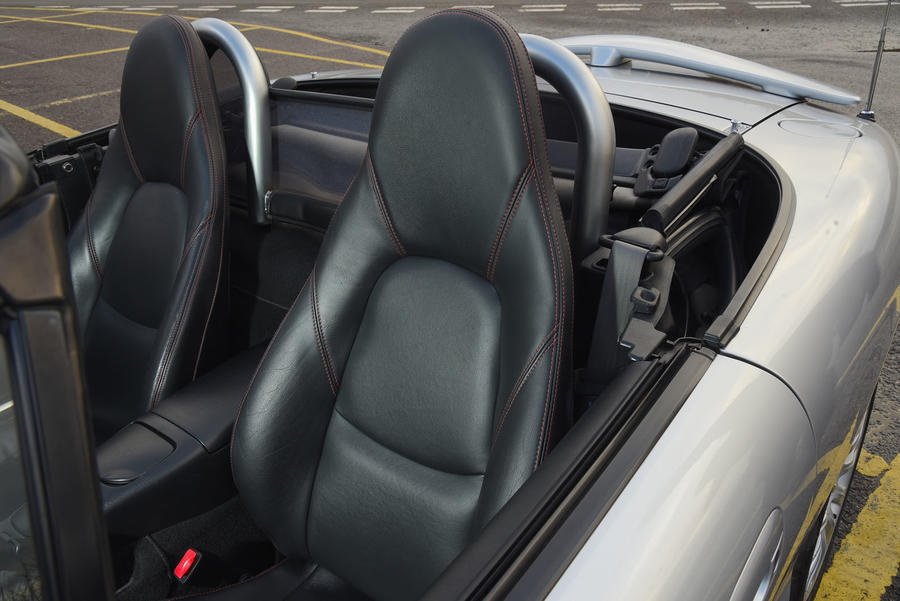 ■ Suspension, steering and brakes: Check for uneven tyre wear, suggesting incorrect four-wheel geometry. All four should be set up independently of each other. Suspension bushes will look terrible but they rarely fail. Check for seized brake caliper pistons and springs broken by speed humps.

■ Body: Regarding rust, later Mk2s fare worse than early ones. Rotting rear wheel arches are easy to spot but the sills, which rust from the inside out, will require much closer examination. Front chassis rails suffer badly. Unlike the Mk1’s, they’re a double-skinned box section for additional impact strength but this traps moisture and they corrode. Surface rust blights the underside, rear subframes and wishbones. Check for bonnet corrosion caused by stone-chipping. 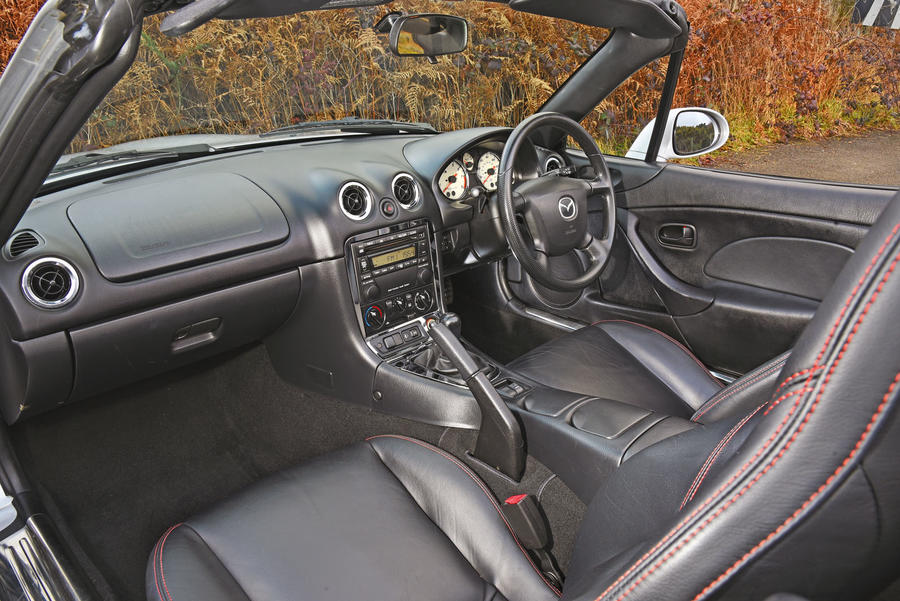 ■ Interior: Expect worn seats and collapsed armrests. Also worth knowing The first thing to do when you get your Mk2 home is brush and then rustproof the underside with something like Dinitrol. It’ll stop things like subframes becoming terminal. Then go online and find out where all the entry holes are and flood the cavities to delay rot from the inside out.

£1250-£1999: Huge choice of better-looking cars, many with full or near-full service histories but check for filler in places such as sills and wheel arches. 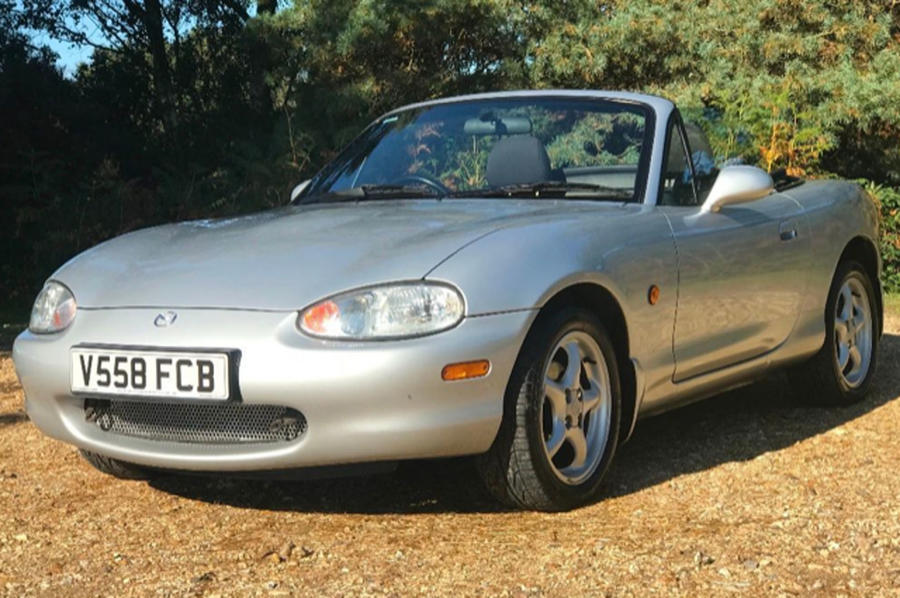 Mazda MX-5 1.8 Sport, 1999/V, 64K miles, £1999: ‘Full service history!’ exclaims the ad before admitting that it has had 11 services… No worries. Your biggest concern will be body rot but this is an early Mk2 and these were better protected, so fingers crossed.

I think you meant either "rust proofing" or "anti rust" John.

Agreed the cars rot but in the real world say a £1,500 to £2,500 bill will get it back on the road for a good few years, you will be about that maybe a bit less to sort a MK1 with not to much rust.

As noted a very clean Mk1 is well over £4,000 but as always if you do not want to get into sorting the car, a lot to be said for buying a clean car to start with as life can be two short.

In certain cases expect £1,000 to £1,500 or so to redo a an early Mk3 as the rear arches go and the area you cannot see beneath the rear sill covers can go as well.

The 6 Speed MK3 is a better car if you do a lot of touring, the earlier cars are nicer for say a 50 to 80 mile run but get a bit noisy on the motorway if you are doing a good distance.

Due to the smal size of the cars, people with long legs or longish bodies can fit in say a MK1 but maybe not a Mk3.