BACK TO ALL NEWS
Currently reading: Used car buying guide: Ford Mondeo ST220
UP NEXT
New 2023 Porsche 911 GT3 RS is "most track-focused" ever

Drive a 223bhp Ford Mondeo ST220 and you’ll never tire of surprising people with its brisk turn of pace. We can help you to spot a good buy
Open gallery
Close

Time was when Ford had performance covered. If you were a young hooligan, you bought a Fiesta ST, while older ones went for a Focus ST. But what if you were a youngish person staring family life in the face or someone with responsibilities but an itch to scratch? That’ll be the Mondeo ST220 of 2002 to 2007.

Powered by a 3.0-litre V6 producing 223bhp and 210lb ft, it could do 0-62mph in a hot-hatch-baiting 6.6sec. As owner John Goldspink confirms, it’s fun surprising young blades at the lights, although you do pay in fuel consumption. About 20mpg around town, anyone?

Once leased by execs wishing to upstage their inferiors but without the punch to shoot for a BMW 3 Series, most Mondeo STs long ago ended up in the hands of those less able to afford its fuel consumption, never mind the occasional service. Mileages are generally on the high side, and gearboxes and suspensions have usually taken a hammering. 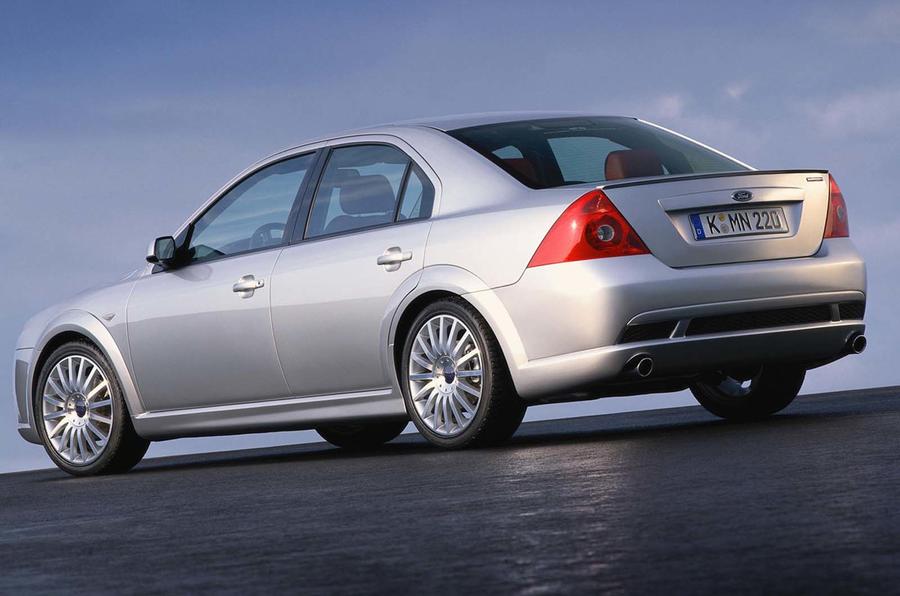 Still, the occasional diamond can be found, such as the one we unearthed. Scott Harper, its owner, has been this ST220’s custodian for just 18 months (he’s fallen in love with a Mercedes E320) but says that during that time, it has been almost faultless. Only ‘almost’ because it failed its last MOT on a dodgy ball joint, since rectified.

“If I wasn’t about to replace it with something a bit meatier, I’d have another ST in a flash,” he says.

His Mondeo is in desirable racing blue. It’s the five-door hatch – more useful than the saloon version but not quite as lusted after as the fairly rare estate, with its capacious boot and clever, self-levelling suspension. One private seller is asking £2250 for his “slightly bished” 2004-reg estate with 150,000 miles and loads of service receipts. Or how about £2999 for a dealer’s 2006/56-reg car with the same mileage?

The Ford Mondeo is a fine car in most areas. The family hatch is still a class leader even as its replacement nears 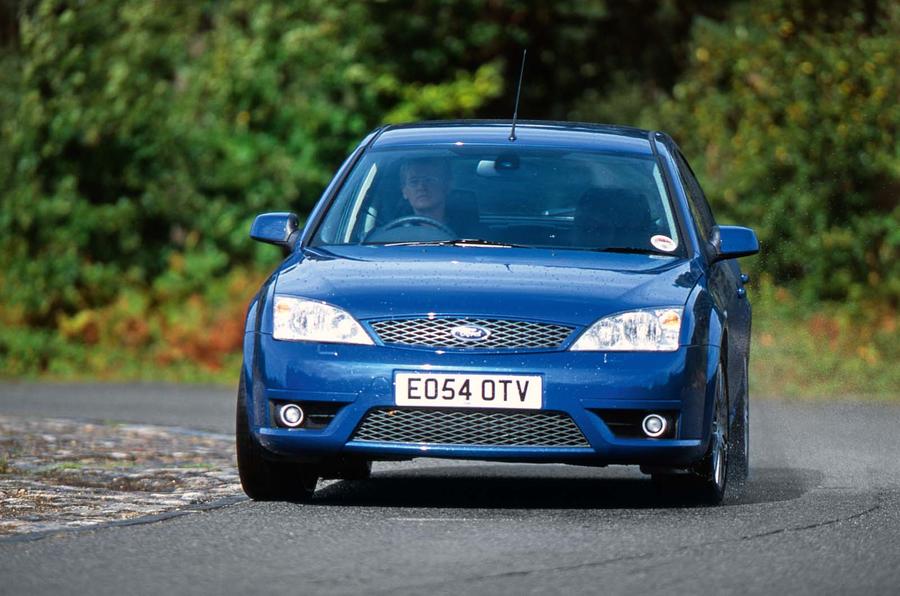 Whether saloon, hatch or estate, the ST220 came with a bodykit, 18in alloy wheels and heated Recaro leather seats. Early versions were handicapped by a modest five-speed manual gearbox, but a Getrag six-speeder became standard in 2003. The taller top gear turned the sporty ST220 into a relaxed mile muncher, while the remaining gears acquired slightly lower ratios for an even sportier drive.

The V6 engine has no serious failings. Instead, it’s the electrics that are more likely to give trouble, although we’re talking predominantly about comfort elements such as the heated seats. Whether you want to spend £500 sorting out those on a car worth little more is your call.

If you’ve found a good one for little money and you think it might be a keeper, why not consider a power upgrade? Something like Pumaspeed’s ST250 mod might fit the bill. Your £1347 (fitted) buys a Milltek Sport cat-back exhaust, K&N cone filter and Pumaspeed tuning box. Could be just the job when those Fiesta STs come sniffing.

An expert’s view – JOHN GOLDSPINK: “I’ve had my ST, a 2003 hatch, for almost 10 years. I got it when we were starting a family and I just kept it. Mrs G loves the practicality and I love the performance. Unfortunately, while I was away driving my BMW M3, my wife forgot to keep an eye on the ST’s oil. The crank self-destructed and I had to shell out for a recon engine at £1600 fitted. That was 20,000 miles ago when the car had some value. I’m selling it for £1000 now. I’d really recommend an ST220, but be prepared to get just 26mpg – if you’re careful.” 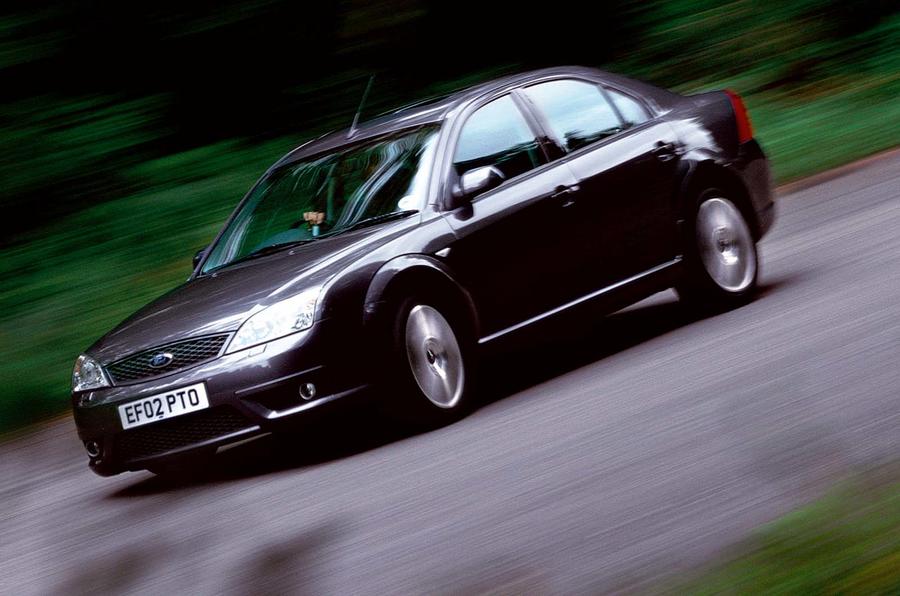 ENGINE: Irregular oil changes affect chain tensioner reliability. Listen for a noise like a diesel engine as the chain relaxes. Also listen for ticking cams and uneven idling when hot. Be vigilant for rumbling low down at the front from the bottom crank pulley and for a mooing noise caused by a worn air bypass valve.

GEARBOX: With the car in second gear, pull away. If it stutters and misfires, the flywheel is on its way out. Once under way, feel for notchy changes.

SUSPENSION, STEERING: Clonking and looseness at the front could be worn bottom arms, strut top mounts, drop links or dampers. Listen for clunking or banging at the rear caused by worn rear subframe bushes. Check the high-pressure power steering hose near the bulkhead, where it can rub through. On the estate, look out for oil leaks from the self-levelling rear suspension dampers.

WHEELS, BRAKES: Listen for worn wheel bearings humming during the test drive. Release the handbrake and then raise it with your fingertips. If it rises without resistance, the cable could be seized or on the way out.

BODY: Check the underside of the front bumper and the corners at either end for cracks. Look for rust on the bottom of the doors, wheel arches and around the windscreen. Underbody rattles are likely to be a loose heatshield.

INTERIOR: Check the air-con and heated seats work and the battery light isn’t on. 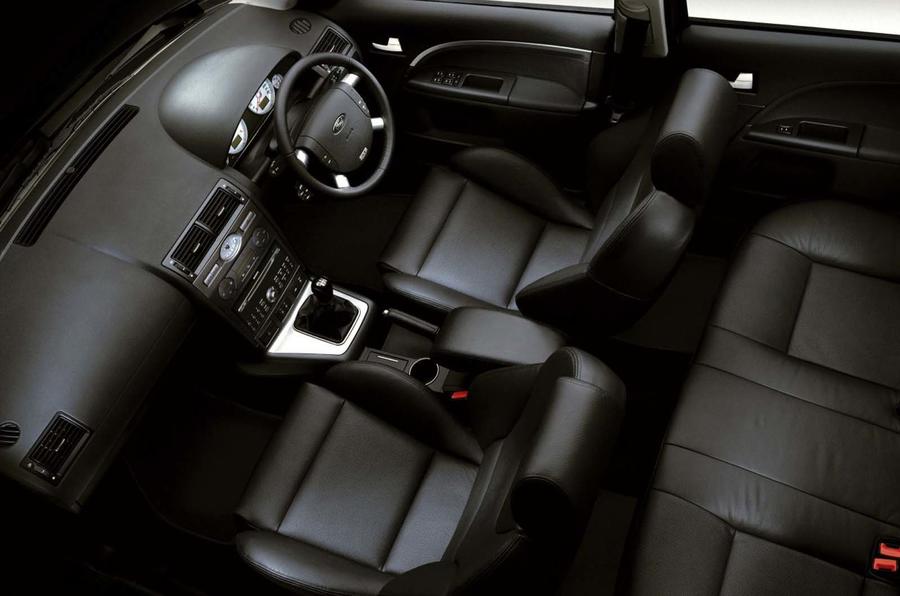 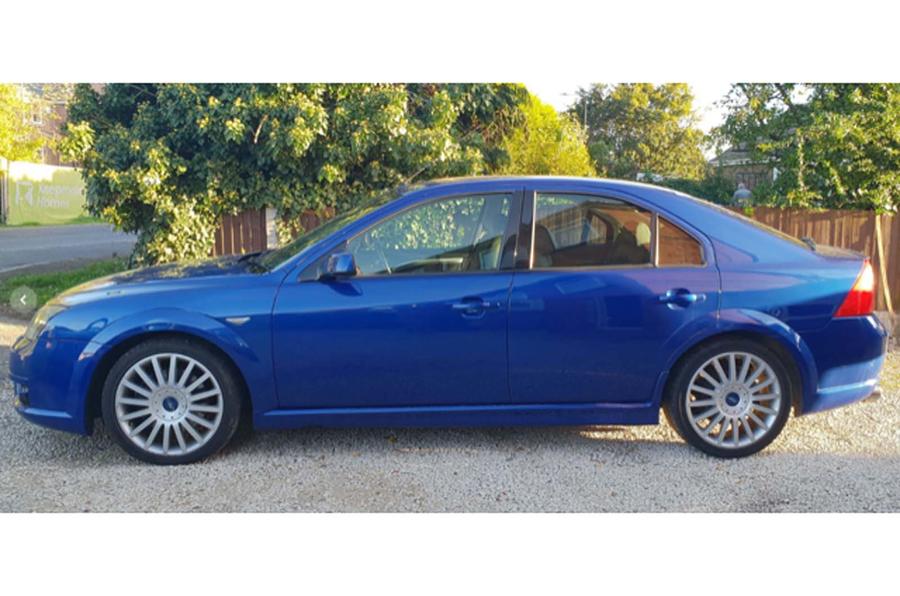 FORD MONDEO ST220, 2004/04, 130K MILES, £1995: Described as being “absolutely beautiful with a perfect interior”, this blue ST looks bang on. It has a Cobra stainless steel exhaust and a fresh MOT. That the private seller is candid enough to admit it has part service history is strangely reassuring, too.

not since the much loved essex V6 engine found in the classic 3 litre capris have we had such a engine in a sports derived model, plenty of options re tuning and of course depends on your budgets, sadly many examples out there run on shoe string budgets by lead footed heroes or chavs are ones to avoid plastered in tacky juvenile decals, if clutch is on way out look at spending £1000 inc labour, maintained well they are a cracking car with good features,  the focus st225 front calipers offer a decent upgrade on these cars due to terrible 300mm fitted from factory, as well as replacing many of the bushes with poly ones it peps up the handling nicely, some think the diesel is worthy of the ST badge but many purists think classing any diesel with ST badge is a slur on fords sporting heritage.

The small ads are full of these cars sadly most have been neglected as being run on shoe string budgets or kids chaving them up, viewed 20+ of these cars before finding a honest decent example out of the 9 dealers I visited NONE were as described so typical dealers then, there are a few facebook groups for these cars and some are very clicky so chose wisely, diesel versions do nothing for me as I would rather own a tractor, just inspect fully before coughing up any cash.

one of the last ones. Blue hatch, in dealer stock, brand new, with Ford assistance ie several £k off. I was going to be a bit of a financial stretch and ended up deciding against, but wish I hadnt.