Does the Volkswagen Golf’s serial appeal rule it out of being considered a ‘cult hero’?

Not in the case of the Mk5 Golf R32, a car that blazed the trail for today’s Golf R with its GTI-trumping performance, a chassis you can trust implicitly and the sure-footed confidence of four-wheel drive. Throw in a 3.2-litre V6 engine and the model’s appealing balance of scarcity and availability – there are just under 2500 Mk5 R32s on UK roads, according to howmanyleft.com – and it has ‘cult hero’ written all over it.

The Mk5 R32 arrived in 2005 as an alternative for drivers who thought the firm’s popular GTI was just a little bit too sensible, but questions were immediately asked about whether it could justify its £4000 premium over Volkswagen’s stalwart performance offering. It was the second Golf to brandish the R32 badge – the Mk4 Golf was the first – and it was a significantly improved package.

Its 3.2-litre V6 petrol engine produced 247bhp and 236lb ft of torque – a hefty increase over the 197bhp and 206lb ft of the contemporary Golf GTI. It also had two driven axles to the GTI’s one and its four-wheel drive came courtesy of Volkswagen’s Haldex 4Motion system. Drivers had the choice of a six-speed manual or a dual-clutch automatic (DSG) gearbox. Unlike in modern dual-clutch set-ups, the manual was the quicker of the two. It gave a 0-62mph time of 6.2sec, which rose to a still-pretty-brisk 6.5sec for the DSG. 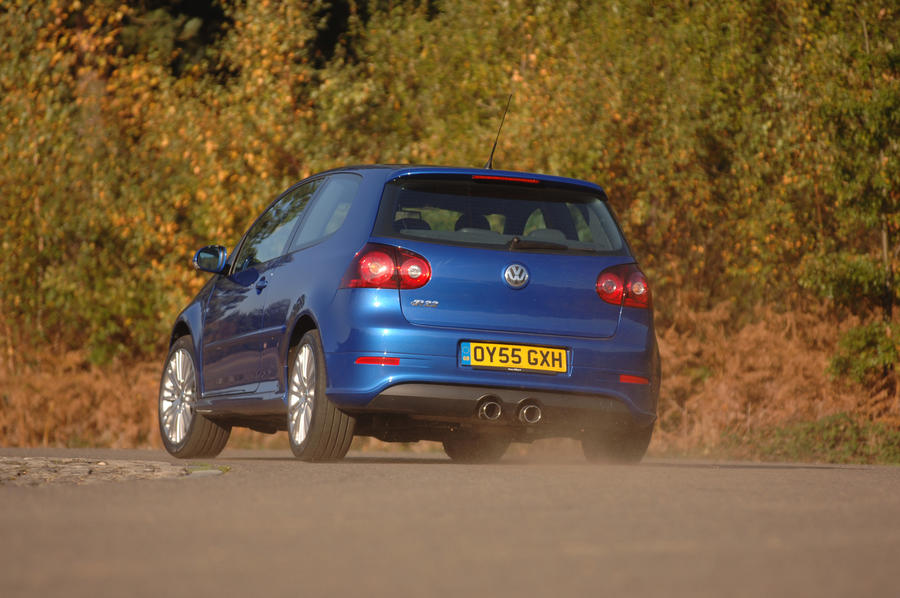 With a firm but certainly not uncomfortable ride, the car was more than suitable for daily driving, but it also felt – and sounded – more special than a GTI. The dynamic changes extended to a twin-exit chrome exhaust, which we described as “deliciously raspy” on our original test, and the R32 certainly had the right amount of everyday character to make the commute interesting.

Further changes were aesthetic, with a chrome front grille and blue brake calipers, which went on to become a trademark styling feature on all future Volkswagen R models. The R32 was also equipped with bi-xenon headlights and 18in wheels as part of its push for further exclusivity. Inside, the high standards set by the regular Golf were in evidence, with a roomy cabin, well-sorted driving environment, sound perceived quality and good ergonomics. 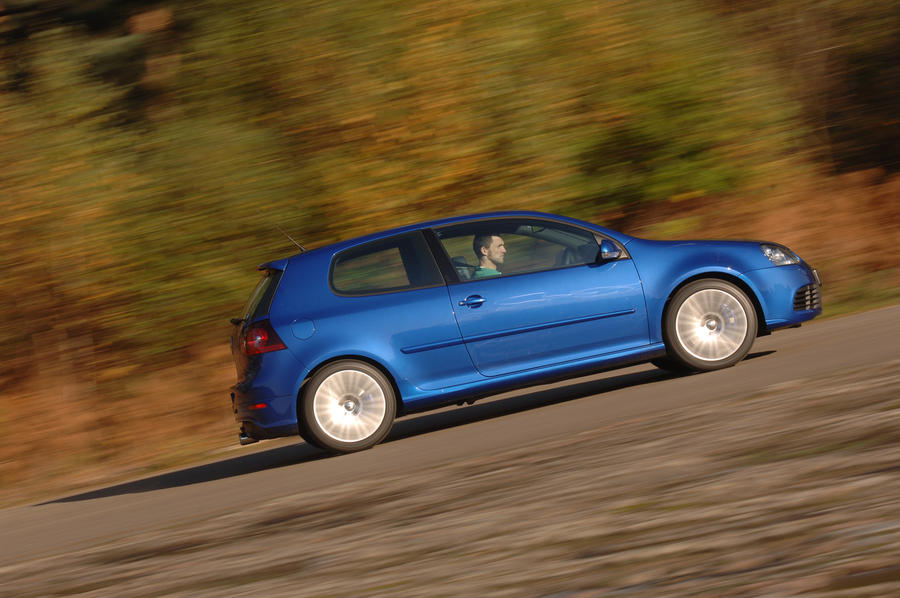 The R32 also introduced a few of its own touches in line with its more sporting remit. A three-spoke, flat-bottomed multifunction steering wheel was standard and, on DSG variants, accommodated shift paddles, while aluminium trim adorned the dashboard. Aluminium was also used on the centre console, pedals and door panels.

Climate control and smart wipers were fitted as standard but some of the features now common on many of today’s new cars were optional, including parking sensors and sat-nav. Other options provided a sportier feel, including hard-shell Recaro seats with their additional lateral support.

The R32 pushed the Golf into a new performance bracket without compromising its appeal as a practical family hatch. And talking of appeal, prices today start at £5000.

5 October 2005: “The R32’s handling matches its pace, with masses of grip and taut body control. Its inherent directness gives a good degree of confidence through quick corners. The brakes are excellent. Backing all this up is a beautifully finished cabin, making the new R32 a more complete car than its predecessor. It’s faster (if only fractionally), more comfortable, better looking and better equipped. It also delivers a level of driveline sophistication that the GTI can’t match. In short: great.” 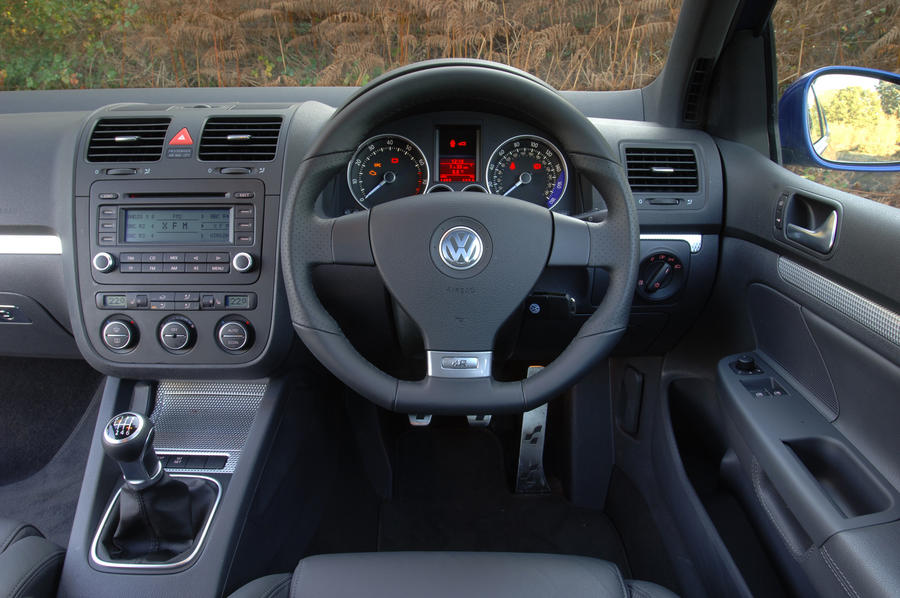 An owners view, Tom Gallagher: “Some might call me stupid but I decided to buy a Golf R32 over the current Golf R in August last year. I don’t regret it at all. While the new car is probably much more refined, the noise my car makes is unbeatable. I think it’s the most enthralling part of the car but, of course, it also drives like an absolute dream.

“I bought a completely unmodified car for £5500 and I’ve had few issues. If I had to highlight any problems with it, I’d say tax is a little high and the car I bought did have fogged up headlights, but they were an easy fix. I’ve also had to sort a few rust problems but they weren’t particularly noticeable.”

Engine: It’s chain driven so you don’t have to worry about cambelt replacement, but you should make sure coil packs, tensioners and bolts are in good order. You will know something’s off if you can hear a rattle from the engine. Oil changes are recommended every 10,000 miles and the rear differential and four-wheel drive system need to be serviced every 40,000 miles.

Transmission: The R32’s DSG requires an oil change every 40,000 miles and is reliable if this is adhered to. Owners suggest the most common fault with the DSG is failure of the mechatronics unit, which can cost up to £1500 to replace. Manuals can sometimes struggle to get into third gear.

Bodywork: Issues are similar to the standard fifth-generation Golf. The plastic lining on the wheel arches can wear away paint, eventually leading to rust. Other rust-affected areas are the door sills, just below the rear VW badge and the roof seams. The front lights can also suffer from condensation if the seals wear.

Interior: The optional Recaro seats can wear around the edges and the seat mounts are prone to rattling. Leather seats can also sag. Damp can affect the battery storage area, boot, sunroof and carpets.

Electrics: Look out for flickering headlights. Cruise control and climate control systems can break and be costly to repair. Some owners have experienced problems with the sunroof opening by itself. People have been known to disable the engine management system light ​​if they don’t want to pay to repair certain parts, so check it on start-up.

Also worth knowing: R32 prices may look affordable, but that 3.2-litre V6 engine has the ability to hit your wallet hard. Few hot hatches are green, but the R32 emits more than some rivals, producing 233g/km of CO2 and setting drivers back £585 a year in tax. You can expect a combined economy of 29.1mpg. For comparison, a 2004 Honda Civic Type R is significantly cheaper, with a £340 tax bill, 212g/km and 31.7mpg. The Ford Focus RS is similar in cost to the Civic (£340 tax but with a combined economy of 28mpg). Mind you, neither has that Volkswagen V6… 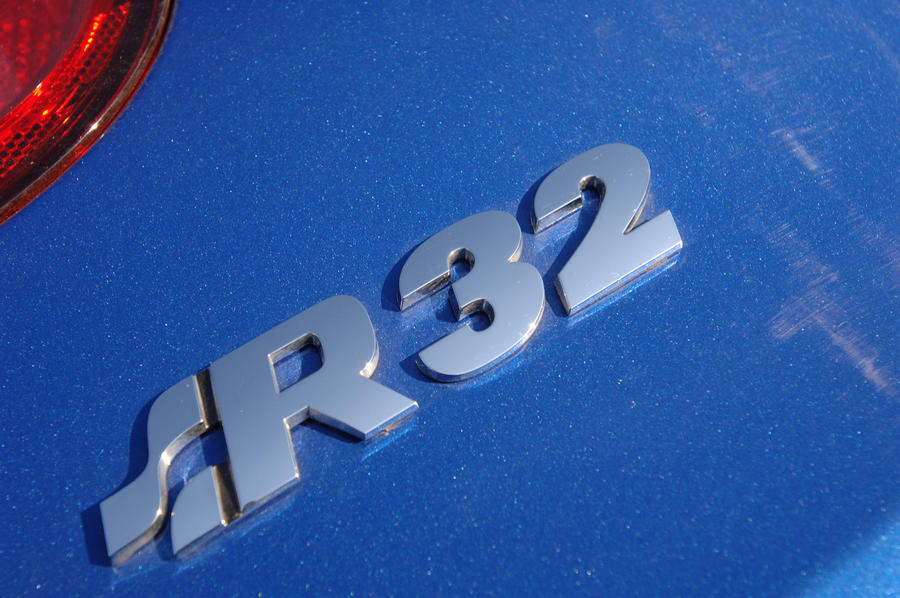 £6500-£7499: A mix of automatic and manual cars, some with optional extras such as a Winter Pack and electric door mirrors.

£7500-£8499: Tidy-looking cars, including some with aftermarket bodykits and remapped engines.

£8500-£9499: Mileages are still high here, but most models have well-maintained engines and very smart bodywork. 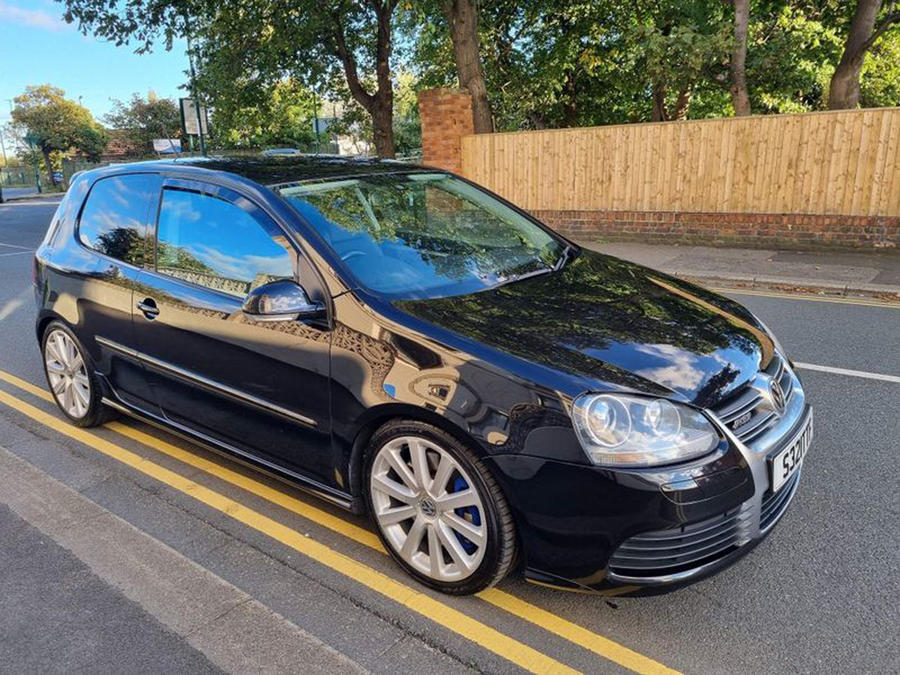 Volkswagen Golf R32, 2009, 102k miles, £8495: This black R32 comes with a full, 11-stamp service history, two keys, a like-new interior kitted out with sat-nav and a clean exterior. Its MOT runs until August and it’s being sold with a three-month warranty.

Log in or register to post comments
Marc 14 February 2022
The type of person buying and driving these isn't really the sort to be too concerned about taxing their car anyway.
si73 14 February 2022
Annual tax bill over £500, it's nuts isn't it as when they changed the tax regime in 2017 you can run a similarly high co2 car for around £155, just look at the tax difference between a used 2016 and 17 Mustang.
The V6 did sound special on these but you can see why they went to a tuned version of the E888? 2.0 engine, personally I've always preferred the GTi, plentiful performance and a more nimble lighter car, but I can certainly see why the R32 and later Rs are coveted.