Slipping discreetly under the brash-o-meter on the luxury SUV radar, this is actually the third-generation Volkswagen Touareg, a technofest on wheels that combines sharp but subtle looks and a lush interior with real on-road ability.

Underneath, it shares much with everything from the imperious Audi Q7 to the manic Lamborghini Urus. There’s aluminium here and more of the stuff over there, and if it’s not exactly lightweight, it at least tosses a caber in that general direction.

You can choose from a variety of turbocharged 3.0-litre six-cylinder engines. The 228bhp and 282bhp diesels are a touch gruff at idle but smooth on the move and have plenty of power. The 335bhp 3.0-litre petrol arrived late in 2019 and is quieter and even faster, but that comes at the price of higher fuel bills, which is where the 456bhp plug-in hybrid system of the Touareg R comes in, with a claimed 28 miles of electric-only driving.

Click here to buy your next used Touareg from Autocar

Entry-level SE trim will suit most buyers, with 19in alloy wheels, leather trim, heated front seats, dual- zone climate control, LED headlights, front and rear parking sensors, sat nav, lane-keeping assistance and a 9.2in infotainment touchscreen. SEL has adjustable lumbar support for the front seats, while R-Line models have 20in wheels and sports suspension. Tech editions of SEL and R-Line get you the upgraded 15.0in infotainment system and 12.0in digital information display. Black Edition adds 21in wheels, a panoramic glass roof, adaptive headlights and a 360deg camera. The R operates as the highest-rung model with 22in wheels and model- specific exterior and interior styling.

All Touaregs have four-wheel drive. Grip levels are high and agility is impressive, particularly when the car is equipped with the more advanced air suspension and four-wheel steering set-up. R-Line and R-Line Tech models are fitted a with sports suspension that’s too firm, thumping over potholes in an undignified manner and jostling you from side to side on country roads. Wind noise is well suppressed, but road roar is a touch louder than in rivals when the Touareg is fitted with bigger wheels. All the engines come with an eight-speed automatic gearbox that shifts without fuss but can be a little hesitant at low speeds. Things look quite flash inside, but the fit and finish isn’t as good as some premium rivals. There’s plenty of padding for your elbows, mind, and there’s lots of space for the driver and both front and rear passengers. You can also slide and recline the rear bench for greater comfort or fold it down in a 40/20/40 split. The boot is big and the loading lip shallow. 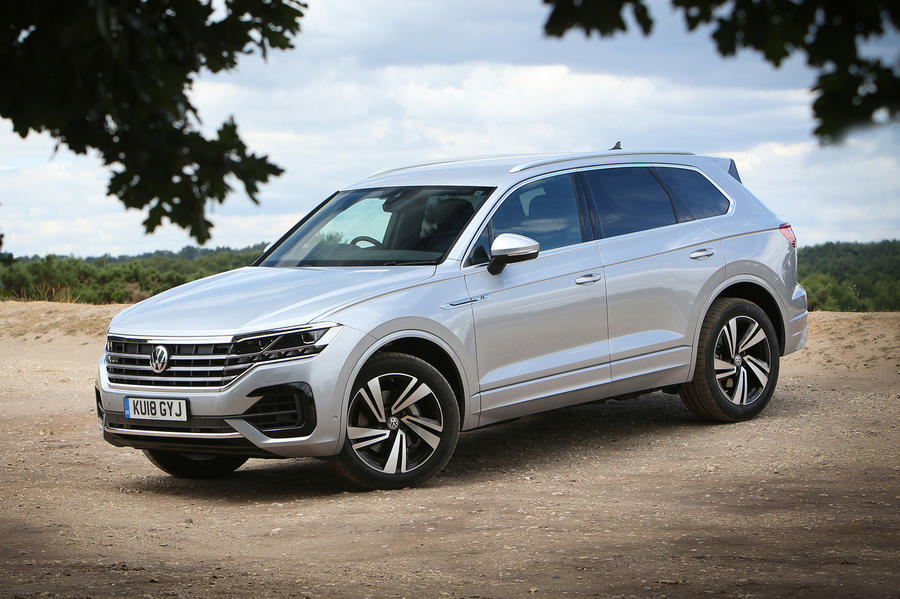 To keep a lid on running costs, consider the 3.0-litre diesel, which achieves 34.4mpg compared with the 3.0 petrol’s 26.6mpg. None matches the claimed 95.2mpg of the plug-in hybrid R, of course. An issue has been found with the front shock absorbers fitted to some early Touaregs. A problem with the right rear seatbelt buckle could compromise the safety of cars made between August and October 2018. And a connection within the steering system could work loose on cars built between April 2018 and January 2019.

3.0 TDI V6 230: The lower-powered (228bhp) 3.0-litre diesel engine makes the most sense, thanks to its combination of decent performance and far greater fuel economy. The petrol is best for urban dwellers and those who make mainly short journeys. 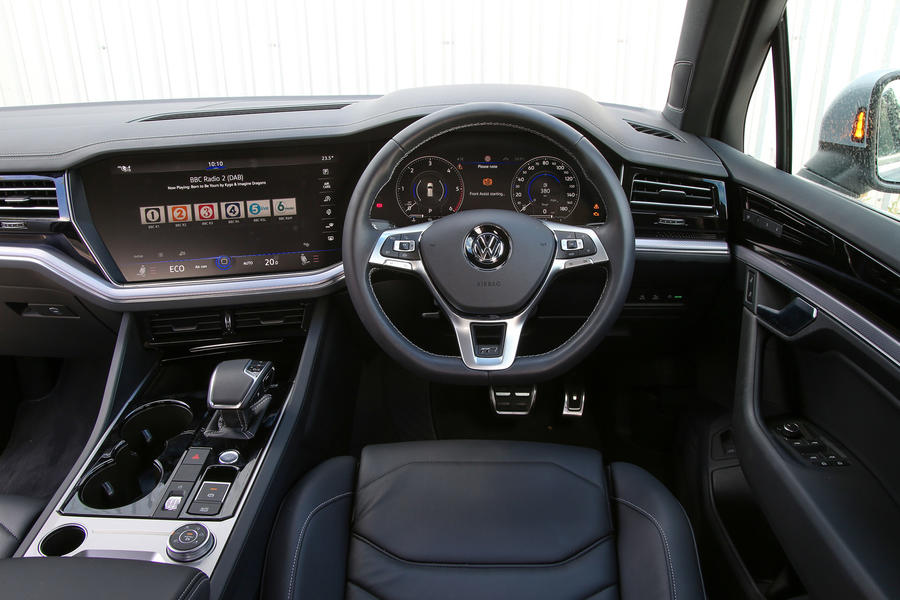 3.0 TSI V6 PHEV R: Big thrills are in order as the expensive R pumps 456bhp through its petrol-electric veins (0-62mph in 5.1sec) and yet has the ability to be the most economical version in the range. So long as you plug it in...

VW have frankly ruined the look of the Touareg. The series 2 was a quietly handsome beast. This third genlooks lumpen and too liberally festooned in unecessary chrome add-ons. There is a fine line between enough chrome to look prestigous and too much which looks like it should have a caravan attached at a fairground. German brands unfortunatley (to please the Chinese), have strayed over that line, and are now seemingly adding chrome to chrome.

The Golf 8 also has become lumpen when previous editions looked fresh (both Golf and Touareg).

The interior of a Touareg was quite classy on the series2, now all plastic (finger marked) screens - cheap and tacky looking.

They have always been good value secondhand, but given that secondhand cars have increased so much in value lately and as the Touareg has been one of the top selling secondhand cars in the last few weeks - unlikely to be the bargain they once were.

It's your pocket, your choice, nobody has right to say you wasted your money,and, if you enjoy driving it, then, that's all that matters.