BACK TO ALL NEWS
Currently reading: Used car buying guide: Volkswagen Scirocco
UP NEXT
Tesla to expand select UK Superchargers to other electric vehicles

​VW’s Scirocco Mk3 is a sportier Golf in cooler-looking clothes and priced from £3500. We run through the all-turbo line-up and reveals what to look out for
Open gallery
Close

Now here’s a tough choice: a VW Golf 2.0 GTI Mk5, the version Andrew Frankel described in Autocar as having “more than 80% of the ability of the best front-drive hatch in the world [the current Mk7] for less than 20% of the money”, or its sister car, the Scirocco Mk3?

However, if you like a little more flair, courtesy of a longer, lower and wider coupé body (yes, the rear cabin is a squeeze), a broader range of engines and, well, something less ‘historic’, the Scirocco Mk3 it must be. Based on the Golf Mk5, it landed in 2008 and was killed off only at the end of last year. 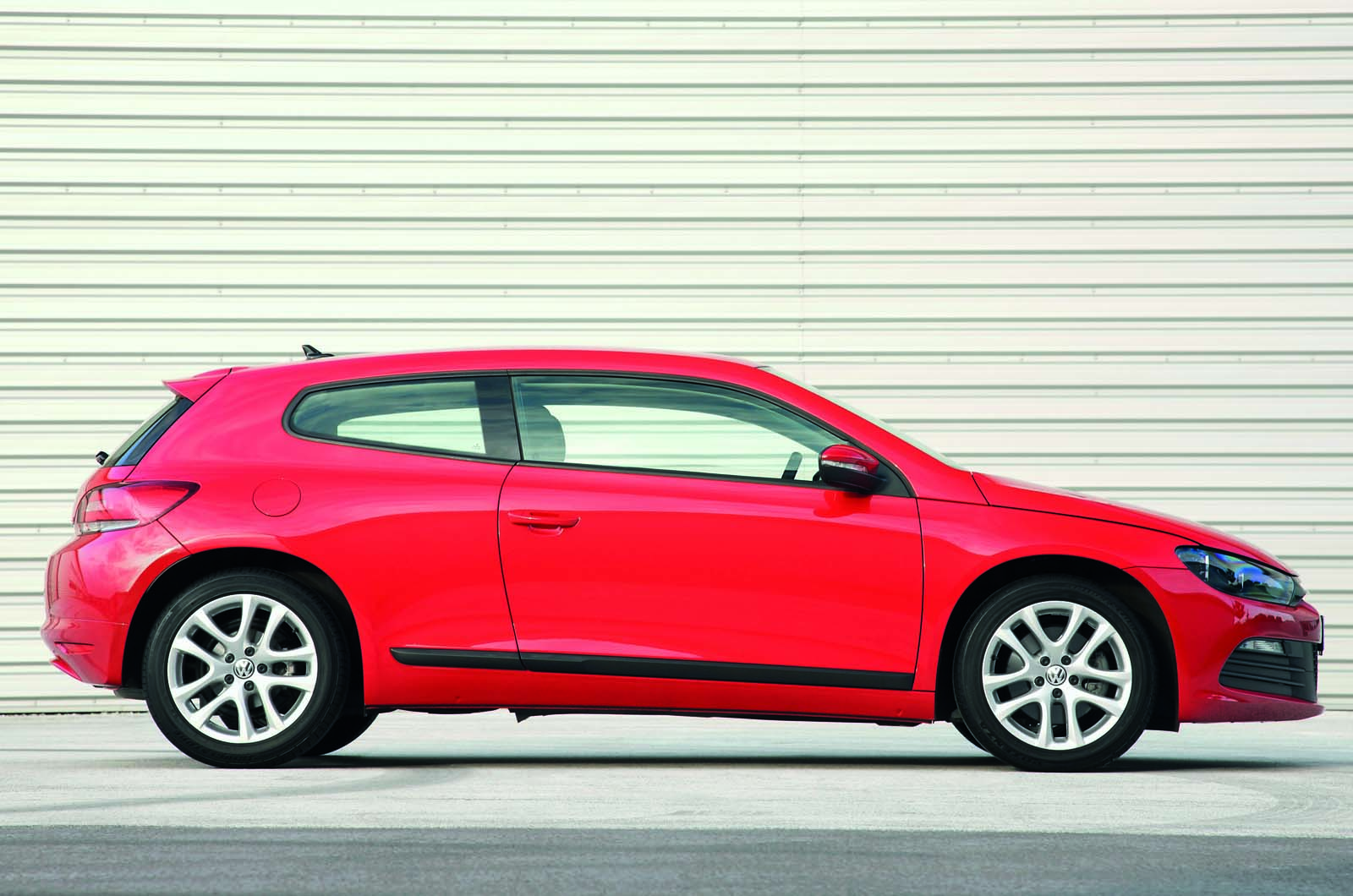 Initially, power was provided by a 194bhp 2.0 TSI petrol engine but that was soon joined by a 156bhp 1.4 TSI petrol and a pair of 2.0-litre TDI diesels doling out 136bhp and 166bhp. All were available with manual or DSG dual-clutch automatic gearboxes.

The DSG is a quick-changing ’box good for keeping the engines, all of them turbocharged, spinning in their sweet spot when occasion demands. However, the mechatronic control unit can play up. Gearbox experts reckon VW had sorted the problem by 2012. Feel for a juddery take-off, although even a healthy DSG can feel hesitant from launch. As for suspension, dynamic chassis control (DCC), offering Comfort, Normal and Sport modes, was an option. In 2009, power for the 2.0 TSI rose to 204bhp but the big news was the arrival of the Scirocco R.

It used a different four-cylinder turbo petrol engine from the standard 2.0-litre with an uprated turbo and intercooler to give 261bhp and 258lb ft. The car was still only front- wheel-drive, although an electronic differential boosted traction. At the other extreme, a 118bhp version of the 1.4 petrol arrived shortly after. 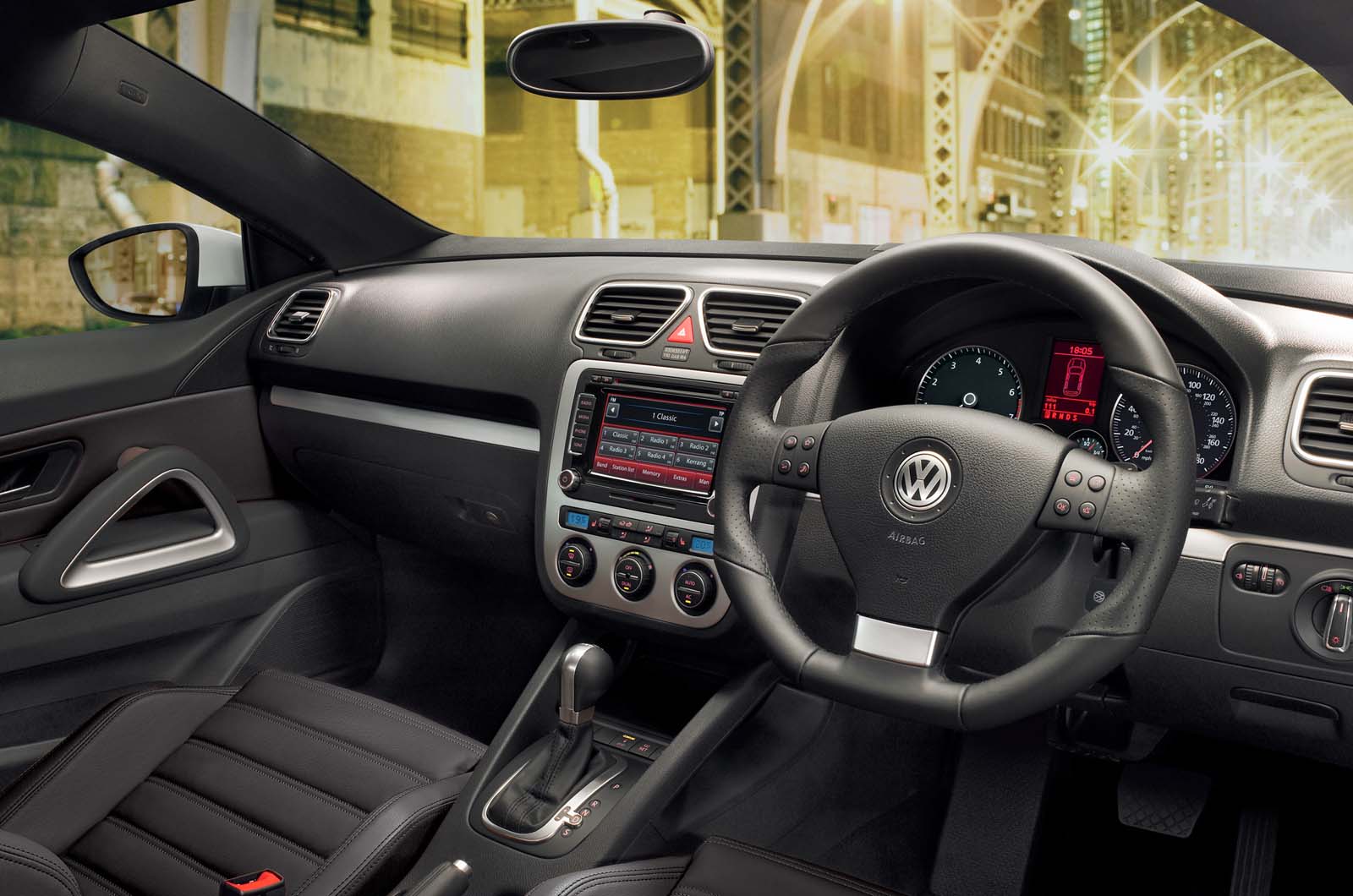 At the same time, the model gained the Golf Mk6’s smarter dials and steering wheel. In 2011, it got that car’s integrated climate control system. The 2014 facelift brought new lights, a smarter front bumper, and uprated petrol and diesel engines. Finally, in 2016, a GTS version was launched with an uprated 214bhp 2.0 TSI motor.

From the off, there were two trims, standard and GT, joined later by top-spec R and intermediate R-line. Price-wise, there are three main Scirocco price points today: around £7500, £10,500 and £13,500, this last one dominated by former PCP cars with low mileages and solid histories.

There are lots of diesels around, but if you’re tempted, haggle hard because their values are falling fast. A better plan is to seek out a 2.0 GT or R. You can pay up to £30,000 for final Black Edition cars but bear in mind they’re a 10-year-old design under all that run-out kit – and an early 13-reg Golf GTI Mk7 starts at half the money. 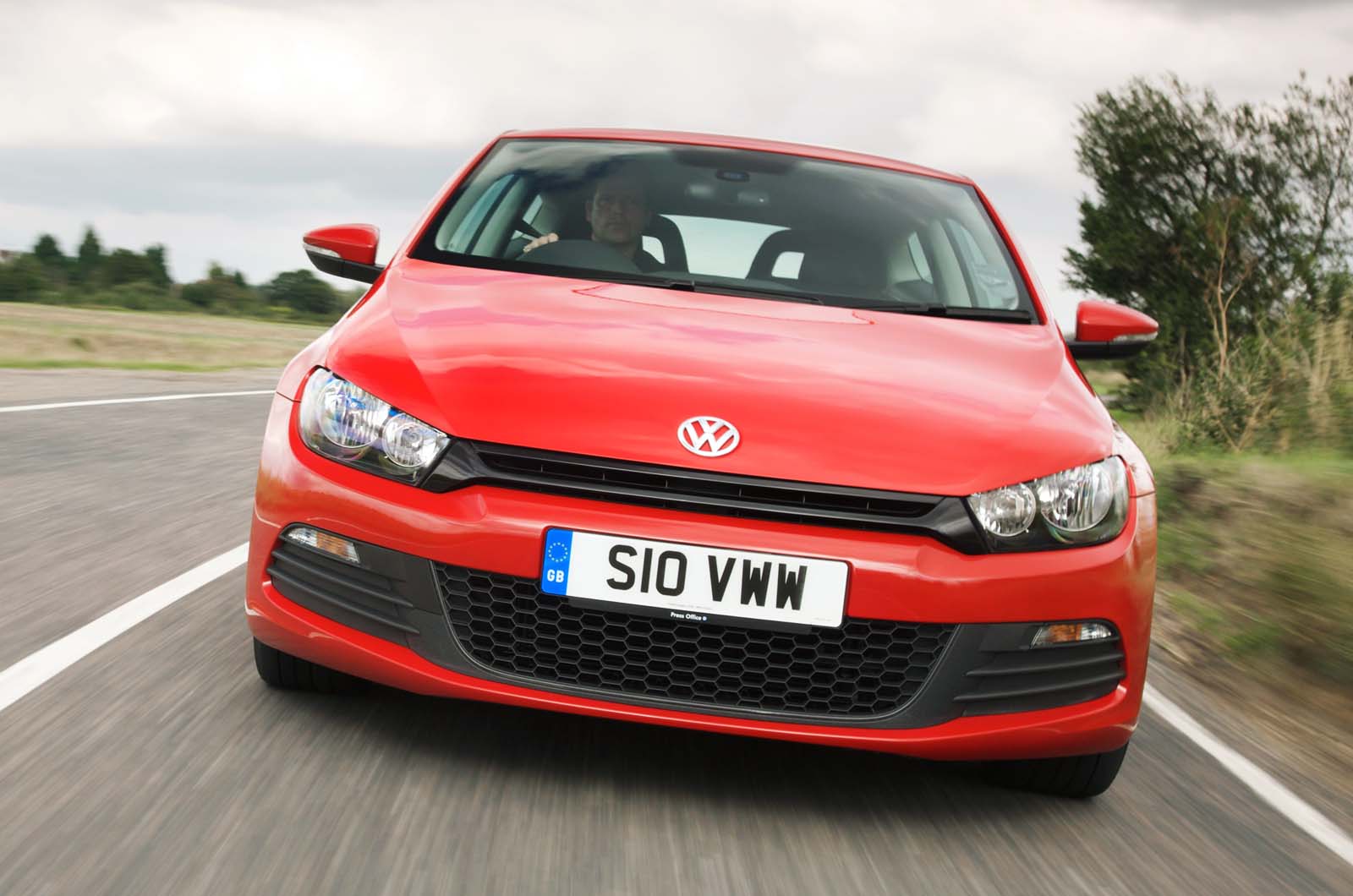 An expert’s view: Phill Jarrett, sciroccocentral.co.uk - “I’m on my second Scirocco, a 2.0 R. It has a TFSI engine where all the other petrols are TSIs. However, the engine cover still says TSI. I love the Scirocco’s styling: it’s unusual and really stands out. Of course, it has its issues. The TSI can suffer broken timing chains (the TFSI has a belt), so get it changed at the scheduled interval. The coil packs can fail, causing misfiring, but it’s a relatively inexpensive fix. The 156bhp 1.4 can drop a piston. That’s a bit more expensive and occasionally terminal.”

ENGINE - On the 2.0 TSI, check for positive crankcase ventilation by removing the dipstick while the engine is running. If the engine stutters, it’s okay, but if it runs smoothly, it has failed. Engine not making full boost? Check the dump valve diaphragm isn’t split. The 1.4 TFSI can suffer misfiring issues that can wreck the engine.

TRANSMISSION - On manual versions, check second gear engages smoothly and the clutch is quiet. Tales of poor reliability plague VW’s DSG auto ’box. Most specialists reckon post-2012 cars are okay but, even so, feel for a lurch on take-off and walk away if it goes to limp-home mode. Ensure the oil and filter were changed at 40,000 miles. 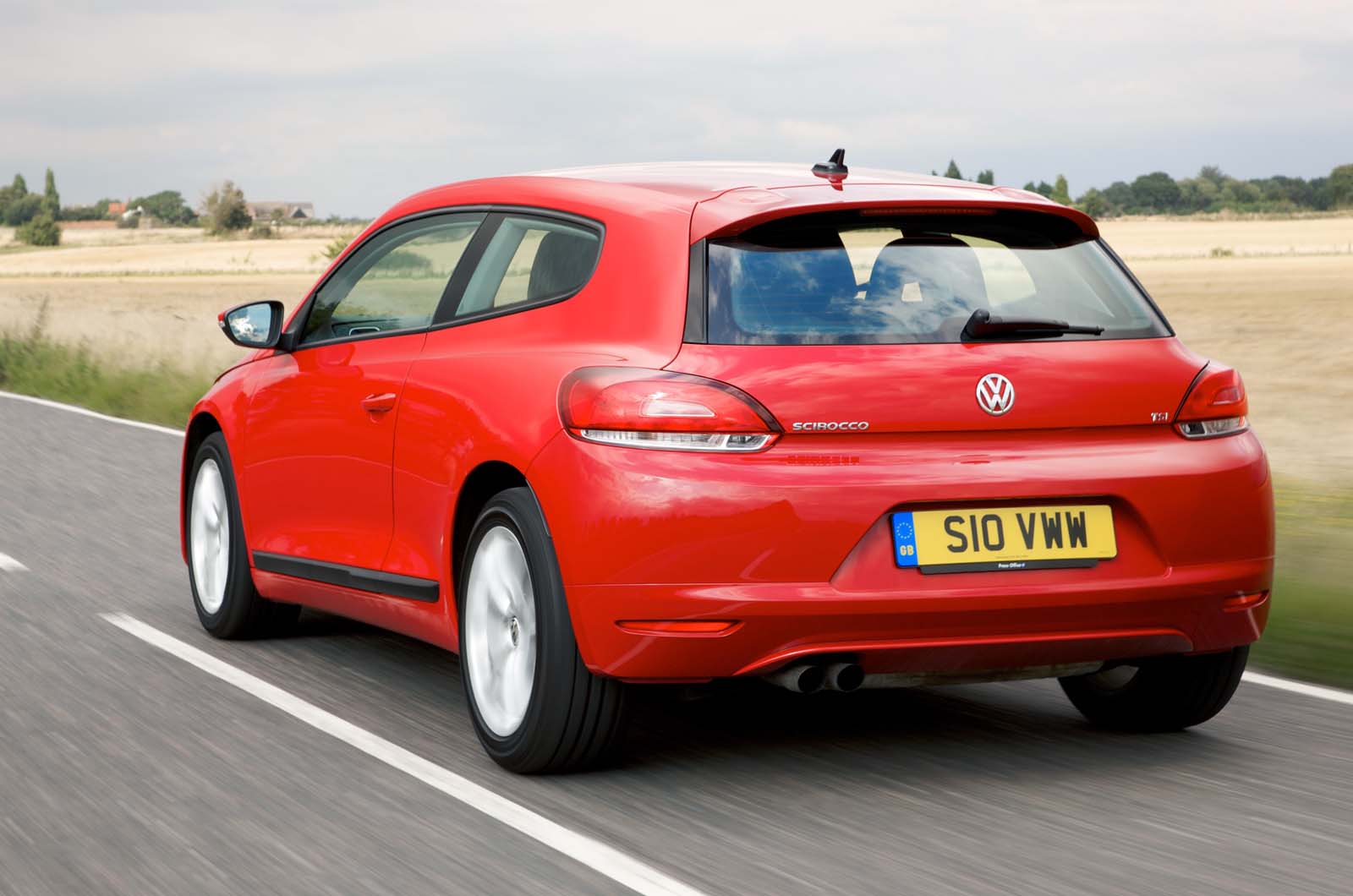 STEERING AND SUSPENSION - Check the rear suspension for oil leaks and, where it’s fitted, that the dynamic suspension functions in all three modes. Inspect tyres for uneven wear, suggesting impact damage. The steering can be noisy at low speeds.

BODYWORK - As the Category N write-offs at the cheaper end of the market testify, the Scirocco is a sports car that can fall into inexperienced hands, so check for fresh paint and uneven panel gaps. Rear three-quarter visibility is poor so look for rear bumper damage. Check early cars for rusty hatch strut mounts. Check for misty headlights and tail-lights, and torn rubber door seals where they freeze to windows. 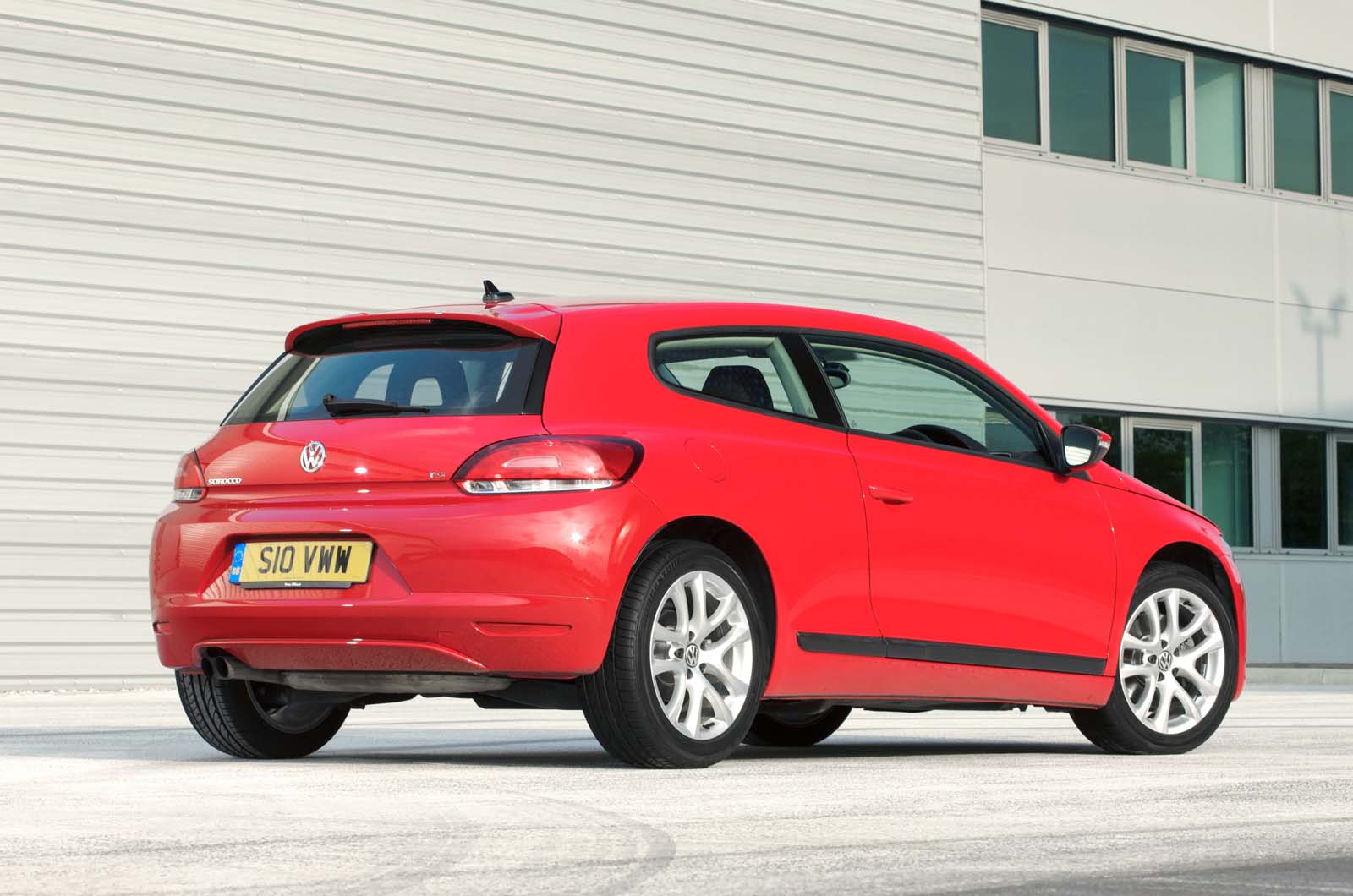 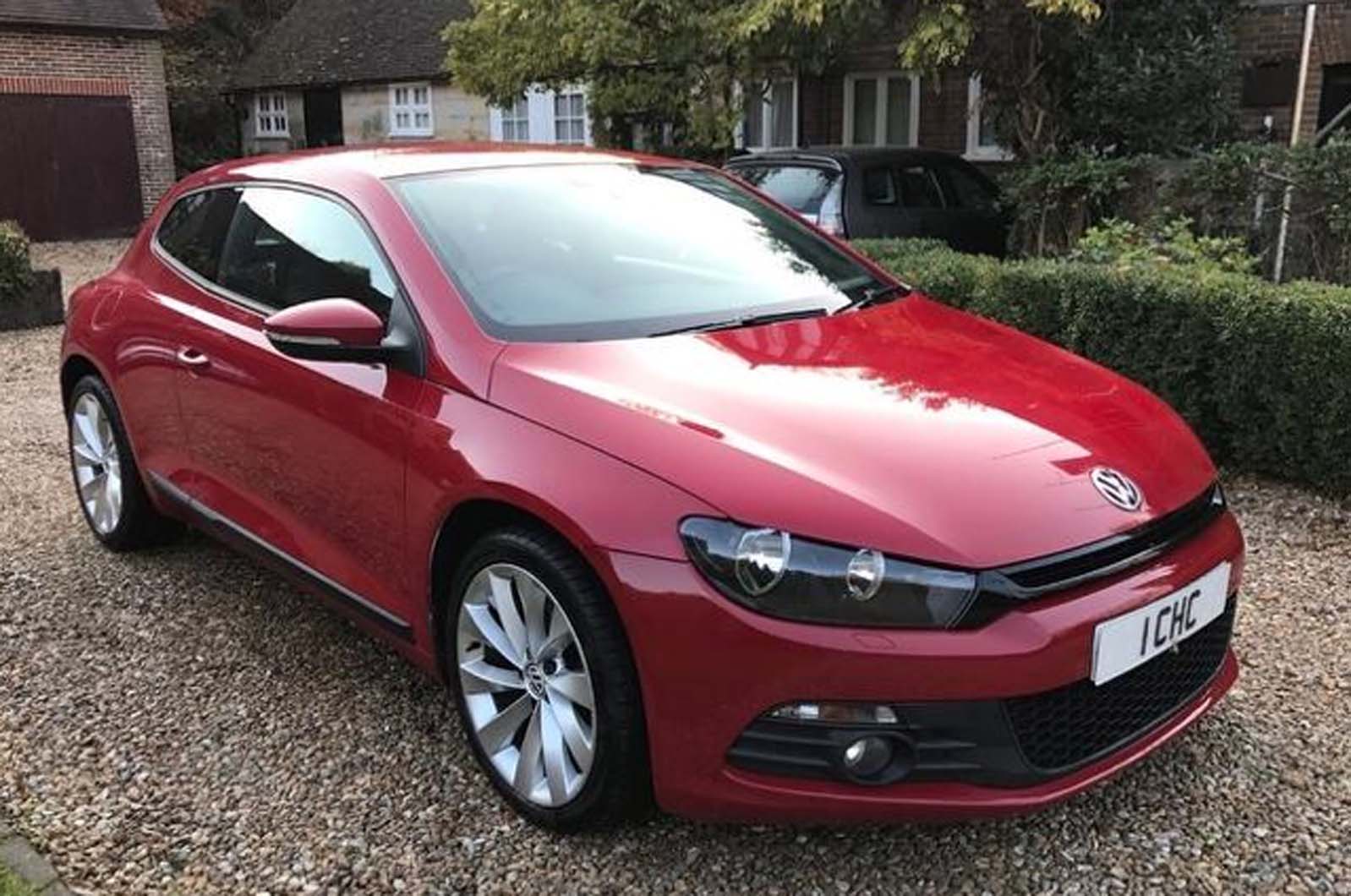 I don't like diesels cars, petrol engine is best but i love old sport car.

Thanks for sharing. I see the novelty of your writing, I will share it for everyone to read together. I look forward to reading many articles from you.

Was a great car

Had my 2.0 tdi about 8 years ago. I personally liked the styling . It was dark night blue metallic with 19” alloys. Good to drive and felt a lot more solid than my current Golf R . I only had it for 3 years and found it to be really reliable. Only issue I had were the factory fitted Pirelli tyres. Seemed to wear excessively quickly &  had blistering on the tyre walls .

Had my 2.0 tdi about 8 years ago. I personally liked the styling . It was dark night blue metallic with 19” alloys. Good to drive and felt a lot more solid than my current Golf R . I only had it for 3 years and found it to be really reliable. Only issue I had were the factory fitted Pirelli tyres. Seemed to wear excessively quickly &  had blistering on the tyre walls .

Shouldve gone down the narbourgh road in leicester mate guy down there that does some cracking deals on part worns got some for me escort . Harnkook top quality mate!! 20 each fitted!!!