BACK TO ALL NEWS
Currently reading: BMW M5 | Used Car Buying Guide
UP NEXT
Ford Kuga PHEV deliveries halted due to battery fires

The high-pitched howl of this car’s V10 makes the E60 arguably the best-sounding BMW M5 yet produced. Here's what to look for in a used one
Share
Open gallery
Close
Share story

Granted, when they come, the M5’s bills will knock you flat on your back but you’ll soon be on your feet, propelled by the desire to re-experience that Formula 1-inspired 5.0-litre V10, whose 389bhp – rising to 493bhp when you press the M (or Power) button – is directed to the rear wheels through a quick-changing, seven-speed, sequential manual gearbox (SMG).

Granted, this best-selling M5, codenamed E60 – there was an E61 Touring version, too – hasn’t the charisma of its V8 predecessor, the E39, and prices still have a way to fall. There are some nasties to watch out for, in particular its fondness for clutches, its appetite for fuel brought into focus by a 70-litre fuel tank that means you’ll be stopping every 200 miles to open your wallet, and its general high-cost ways (mechanics call this the ‘M tax’). But this M5 is still a spectacular way to travel and sooner or later prices will find their level, the best cars will firm up and those who know will talk of it as a ‘future classic’.

It was launched in 2005, costing £61,750 in standard form. Standard? It had 19in alloy wheels, sports suspension, gearchange paddles, a head-up display, a sat-nav, leather trim, quad pipes… we’ll stop there. More important, it had gadgets: that Power button, launch control and 11 shift modes for the SMG ’box (the fastest is seriously hard on the already overworked clutch).

The M5 was facelifted in 2007, a move that coincided with the arrival of the E61 Touring version that already incorporated the new mods. Changes included adaptive cornering lights, larger headrests and visual tweaks (daytime running lights, and LED indicators and tail-lights). Crucially, the SMG transmission gained upgraded pumps and hardware, too. Facelifted cars were released in batches over 12 months, so it’s not unusual to encounter a late-2007 M5 that is actually a pre-facelift model. 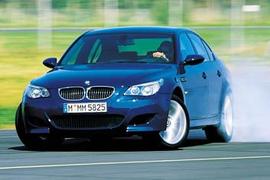 The last M5 super saloon to be powered by a normally aspirated engine - a manic 500bhp 5.0-litre V10 All M5s require careful buying and this E60 is no exception, so drive as many as you can. Research the M button and that 11-mode shift system, and don’t be shy about exploring the many performance permutations. An owner who won’t let you try the M button in the most extreme S6 P500S shift mode is probably terrified that you’ll expose his car’s brutalised clutch and clonky diff.

Check not only tyre wear but also whether the rubber is budget or premium, and test his knowledge of engine oils. Castrol Edge 10W60 should have been its only tipple.

“I owned an E60 M5 and had a very bad experience with it. It had done 130,000 miles without problems and then all hell broke out. Granted, some was accidental stuff like a wing mirror being knocked off (£1000), but it went through three iDrive controllers and two throttle actuators (there are two at £600 each). It also needed a new clutch. Parts aren’t cheap. I was unlucky with mine, though, because generally the E60 is reliable and will do high mileages with ease — and it has the best-sounding BMW engine ever.”

Conrod bearings can give trouble if oil changes are skimped. Check for a Vanos warning light: it could be an oil pressure issue involving the sump-tohead hose or the Vanos pump (£1600) rather than the Vanos unit. Throttle actuators can play up. Expect oil consumption of around one litre per 1000 miles. Check if the expensive main service is due and negotiate if so.

SMG 3 gearbox, fitted to later cars, is more reliable than the SMG 2 but the single-clutch weak point remains. The clutch lasts about 50,000 miles. The ’box is clunky around town but should be clean and quick at speed. Early cars were recalled to replace the SMG pump.

It’s naturally noisy at low speeds and when turning but whining, grinding and clunking are not good. Check for a slight oil weep (£30 each for seals).

Expect around 30k miles from discs. If the disc has a lip, replace. A brake fluid change is needed every two years.

Generally tough but feel for steering column vibration or knocking, which points to worn control arms. The optional EDC suspension is reliable but a damper is £600 if it goes wrong.

If the system freezes on the BMW logo start-up page, suspect the harddrive. Budget £700 for an exchange system or have the ECU and computers updated with the latest software.

BMW has issued two technical bulletins (grinding noises from the rear diff when cornering at low speeds, and preventative maintenance for the sunroof). Safety recalls include one issued in September 2013 for a faulty fuel filter heater that could cause a fire.

BMW M5 prices - how much to spend?

Facelifted 07-08-reg cars with up to 60k miles, plus some earlier cars at optimistic prices.

Most expensive 08-10-reg cars with fsh, including some BMW Approved Used.

You got to be kidding

24 March 2017
You compare depreciation and maintenance on 16k Mini to costs on an old V10 M5, and say if you can afford one you can afford the other? I hope no-one believes your ridiculous statement!

Not just the money

24 March 2017
An M5 that age means every one will assume you are only a middle ranking drug dealer and/or a total knob.
Still, if you are able to cope with the eye watering bills and risks to your licence, every one will love it in 20 years. It is a future classic with all that entails.

"If you can afford the

Nope. I don't believe a word of it.

24 March 2017
I had one a few years ago. The gearbox was what finally made me get rid of it; it's awful. The engine is a bit disappointing below around 5500 rpm but after that the thing was ballistic. It was comfortable, well built and handled really well but I was constantly on edge about getting a big bill. The fuel consumption was epic; I averaged around 14 mpg around town. If you're prepared to take the risk and put aside a few bob for the inevitable expense they're a car with one of the greatest engines ever built and the noise is incredible when it comes on cam. I still miss mine and I'm sure I'll have another one at some point.

As others have said, the

24 March 2017
As others have said, the opening paragraph is pure nonsense. Once hefty running costs and inevitable bills are factored in you have to compare this to new cars costing £25-30k. A easy opener for an article but one that has no basis in reality.

24 March 2017
...over a mid range supermini would be the best part of £2500pa. Versus £2800 per year for the depreciation over the first three years. That's leaves £300 in the kitty for servicing and repairs each year. It wouldn't just be the performance giving white knuckles but the extreme tightness of crossed fingers (amongst other body parts) that nothing went wrong with your second hand car that was built to be driven very enthusiasticaly and probably had been for the past 100000miles. That's optimistic. Then again, a 500bhp BMW vs a 1.2 Polo. A year of crossed fingers for 500bhp? mmm....

The fuel bills alone would

24 March 2017
The fuel bills alone would ruin most people if you used it every day. All very well in theory but in reality only for the very brave and those prepared to hold on to it for long enough that it may increase in value.

I doubt that anybody in reality would find this cheaper to run even taking into account the higher depreciation of a new hatch.

24 March 2017
All I see is turks driving around in these V10 M5s. Usually they also have extremely loud exhausts.
No, thank you.

24 March 2017
All I see is turks driving around in these V10 M5s. Usually they also have extremely loud exhausts.
No, thank you.

24 March 2017
"...A year of crossed fingers for 500bhp? mmm...." - not as exciting as you might imagine, especially if you are not on unlimited empty German autobahn. One only understands this when one has a 500+ car of ones own. In most parts of Europe it is useless and just for bragging rights or because you can afford it. You want a sportscar, buy something small and light with engine in 300hp territory, personally I like Boxster/Cayman S 981 model with 3.4L NA engine. 2-ton car with big engine is a very fast car (on extremely rare occasions when you can hold the pedal for even 10 seconds) but not a sportscar.