BACK TO ALL NEWS
Currently reading: Throwback Thursday: Driving the 1988 Le Mans-winning Jaguar XJR-9
UP NEXT
GSR2: The new rules making cars safer but more expensive

Ahead of the 2017 Le Mans 24 this weekend, we revisit when Autocar sampled the legendary 1988 winner back in 2000
Open gallery
Close

Even if you’re no huge fan of endurance racing, you’ll probably recognise the victor of the 1988 24 Hours of Le Mans, with its covered rear wheel, purple and white body and Silk Cut branding.

We’re of course talking about the Jaguar XJR-9, and on 26 January 2000 Autocar’s Colin Goodwin had the chance to find out whether it’s as good to drive as it is to look at, at a wet Bruntingthorpe aerodrome. 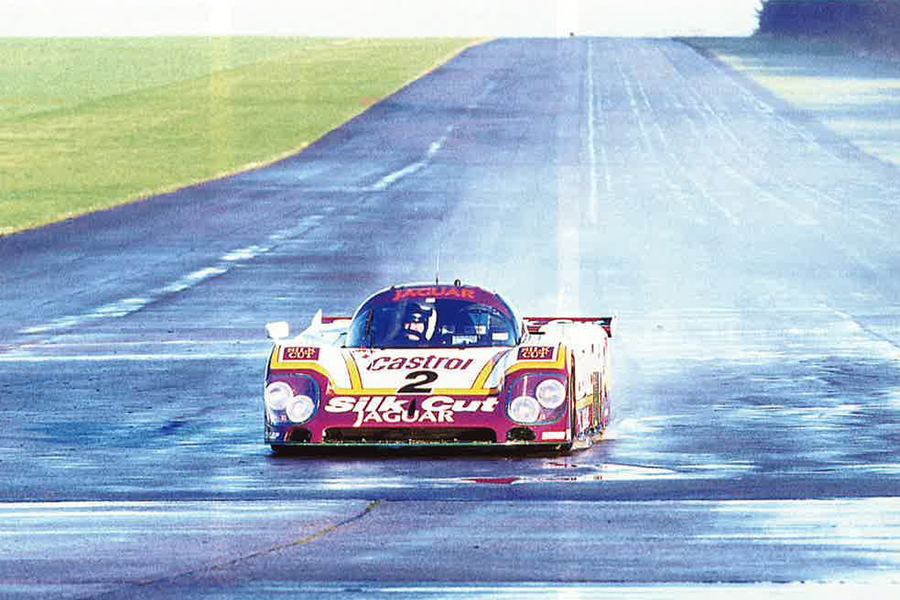 “Below 100mph, the Jaguar XJR-9 feels a bit skittish as we pound down the main straight. But at over 200mph it feels so pinned to the ground that King Kong could be sitting on the roof," he began.

“There is no speedometer in the cockpit, but 6800rpm in fifth gear equals 236mph. I know this because the car was doing the same speed along the Mulsanne straight when Jan Lammers, Johnny Dumfries and Andy Wallace took this very car to victory. 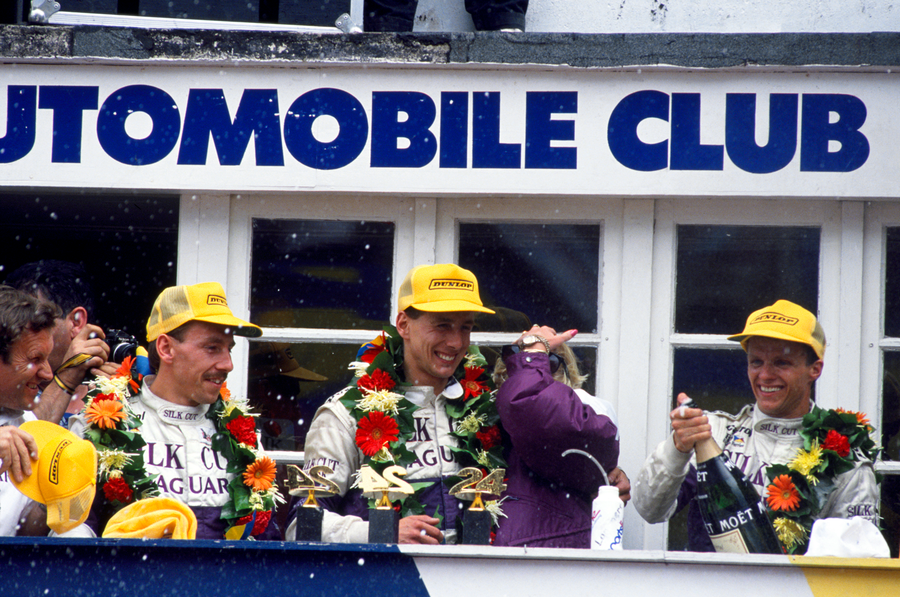 “There’s not enough room to reach that speed here, but by holding my breath I can just get the screaming V12 to 6000rpm, which gives us 208mph. It feels incredibly fast and it’s very difficult to know when to hit the brakes. At the end of the straight is a high earth bank. A fraction of a second too long gazing at the rev counter and the Jag and I will be launched high enough to knock down a satellite.

“I had expected the cockpit to be as busy as a fighter jet’s, but in fact the Jaguar’s is really very simple. To my right is a row of three toggle switches for fuel pumps, ignition and starter. In front is a stack rev counter that reads to 8000rpm but has no redline painted on, and to the left are three gauges that show fuel, oil pressure and volts. Above them a row of toggle switches that work the heated front windscreen, headlights and wipers. And that’s about it. 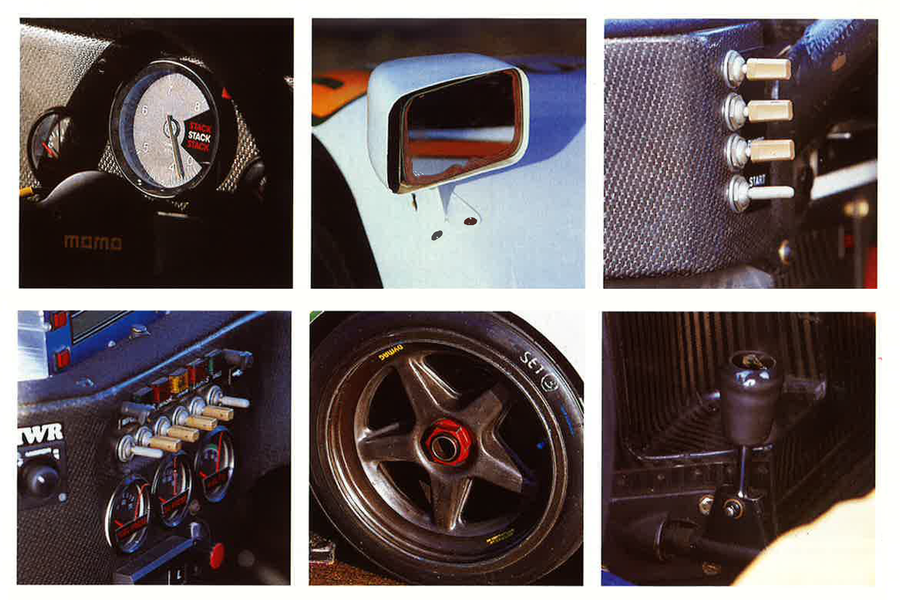 “The steering wheel is quite close but not uncomfortably so; probably just right for a two-hour session at Le Mans.

“I find I get almost as big an adrenalin rush going through the pre-launch as I do when I’m actually driving a very fast car,” Goodwin said, “especially when I don’t know what to expect and the car itself is so far out of my league”.

“The XJR-9 is fitted with a Jaguar V12,” he continued,” but its cylinder count is about the only thing it shares with the engine in your XJS. This 7.0-litre unit produces a staggering 745bhp at 7200rpm and 615lb ft at 5100rpm. It still has single overhead camshafts and two vales per cylinder, but otherwise every other moving part was specially made.”

All that fitted to a car that weighed just 900kg. 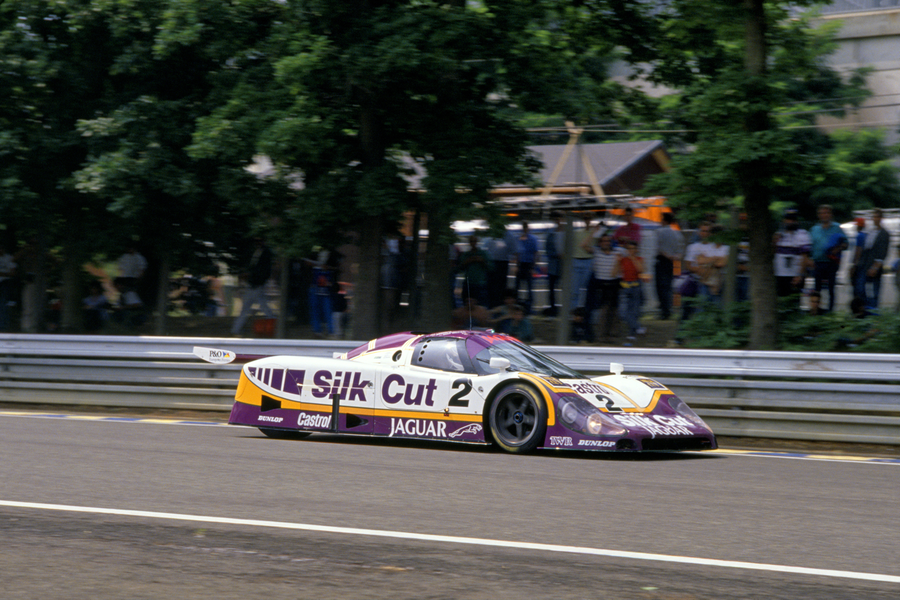 Goodwin continued: “The five-speed gearbox was made by March and the gears themselves are straight-cut with no synchromesh. First gear is left and back, with the other four in an H pattern. We’re before the days of sequential transmission here.

“The throttle is a little sticky and quite heavy, so there’s a loud yelp from the V12 as we creep forward.

“The tyres are 11-year-old intermediates, and are not the most grippy. It’s like driving on ball bearings.

“In first gear, the engine just screams as the wide Dunlops spin all that torque away into the puddles. Same thing happens in second gear. The car doesn’t try to step sideways, although I bet it would if its nervous driver didn’t lift off the throttle and let the tyres find grip again.

“The Tarmac is rather cruddy at this old US air base, and the Dunlops follow the cracks all over the place. But when we’re really moving, the car starts to track straight. 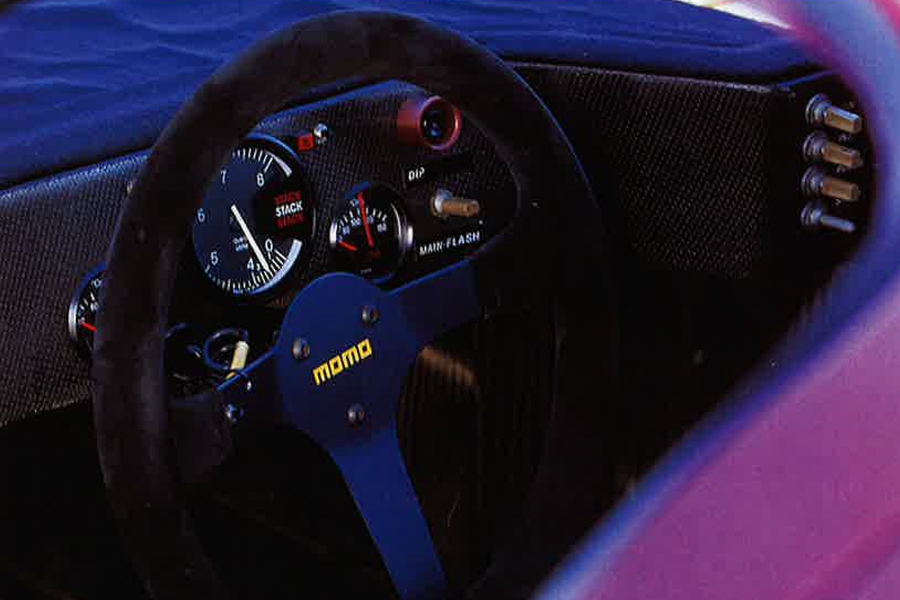 “The steering is light and very accurate. In spite of our incredible rate of progress down the straight, I try not to grip the Momo steering wheel too firmly, letting it wriggle and squirm as the odd bump deflects a wheel.

“After a few runs, I don’t mind it jiggling a bit, because the car itself feels like it’s running on a Scalextric track.”

Anyone can floor a pedal, but braking the XJR-9 was the delicate art. One of the victors of that ’88 race, Wallace, said: “The whole thing about Le Mans, especially at night, is knowing exactly where you are on the circuit.

“There are three braking boards at the end of Mulsanne, and I brake at the second one. It’s a disaster if you miss the first and think the second is it. Then you’re in the fertiliser. 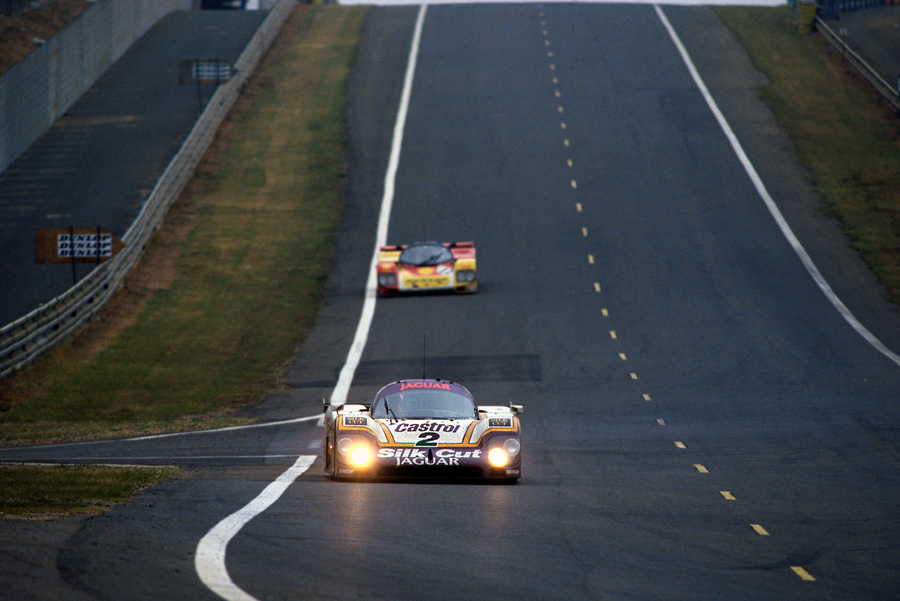 “It was actually easier before they put the chicanes in. As soon as you went up the hill under the Dunlop bridge you knew that you had to brake. It was easier because that point was so obviously marked.

“My favourite cars were from the era when racing sports cars were really Formula 1 cars with a sports car body stuck on, but I loved the XJR-9, too, especially its engine. Proper clean downforce, too, but still very slippery.

“The only thing you really had to watch for was losing the car in high-speed corners. You could afford to get a bit sideways in slow corners, but in faster ones, the tail-heavy Jag would spin really easily and it was difficult to catch.” 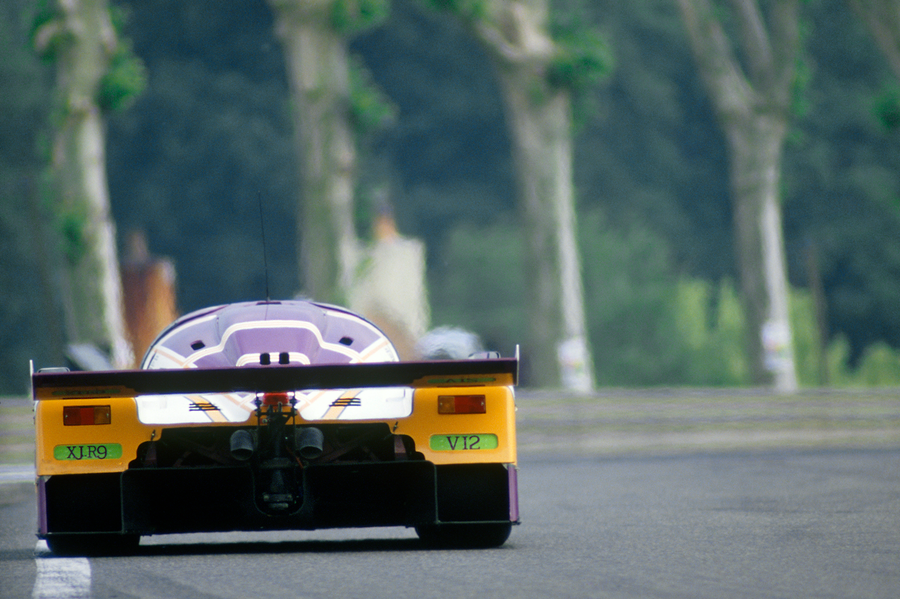 That last bit came as no surprise to Autocar’s man. On a small circuit section of the aerodrome, “I had been whizzing out of the hairpin with a bit of a slide, then straightening it up and going through the gearbox with stacks of revs on,” he said.

“You don’t use the clutch on the way up the 'box; just a lift off the throttle. God it sounds good. Of course I’m getting cockier and cockier, imagining that I’m at Le Mans. Then suddenly I’m looking at the track from totally the wrong angle and going backwards at some rate. It’s true what they say, you do seem to accelerate on wet grass. Eventually, it stops. I gingerly drive the car back onto the Tarmac, wheels spinning all the way.”

And no hideous shark fins !

And no hideous shark fins !

So, we see that tomorrow at Le Masn.

I've built the plastic model kit of the Jaguar.

A great era, with no driver aid, no chicanes, no tarmac outside the track...

Great story and one of my all time favourite racing cars. Would loved to have been there in '88, Le Mans is fantastic but something has been lost with the decline of V12 and move to diesel and hybrids.
View all comments (4)