BACK TO ALL NEWS
Currently reading: Throwback Thursday: 1955 Mercedes-Benz 300 SL road test
UP NEXT
New 2026 Polestar 6 confirmed as 874bhp evolution of O2 concept

This beautifully designed and 'most astonishing' grand tourer was based on a Le Mans winner and a candidate for the first true supercar, being able to hit 0-100mph in just 21.0sec
Open gallery
Close

Much has been written about the Mercedes-Benz 300 SL, invariably describing it as one of the best-looking cars of all time and/or one of the best sports cars of its era. At the least, it was certainly the fastest.

Even if you aren't taken in by the automotive deification of the 'Gullwing' of 1954, it's nearly impossible – upon looking at the car and reading reports about it – to refute either assertation.

The 300 SL was created at the suggestion of one Maximilian Hoffman, an importer of European luxury cars into the US in the postwar years, to whom we also have to thank for the creation of the Porsche 356 Speedster and Alfa Romeo Giulietta Spider.

The grand tourer, carrying the internal designation W198, was essentially a road-going version of the W196 300 SL of 1952. This oddly bloated little creation, of which just 10 were built, was the first racing exploit that Mercedes-Benz had engaged in this side of the war.

Expectations were high, given the Silver Arrows' domination of grand prix racing throughout the 1930s. And the W196 lived up to them in fantastic style, taking a string of wins in its debut season that included Le Mans 24 Hours, the Nürburgring Eifelrennen and Mexico's terrifying Carrera Panamericana (victors Karl Kling and Hans Klenk are pictured below). The W198 used the W196's lightweight welded aluminium spaceframe chassis – the implementation of which forced the use of innovative gullwing doors – that supported the engine, transmission and axles, and clad it in a stunning, streamlined steel body. This gave the car a kerb weight of just 1251kg.

The engine was a 3.0-litre petrol straight-six borrowed from the four-door 300 introduced in 1951. This engine was tuned, however, with a new head that allowed for larger intake and exhaust valves, and mechanical direct fuel injection in place of carburettors.

This application, one of the earliest of its kind, made the W198 significantly more powerful than the W196, with 240bhp and 217lb ft. On 25 March 1955, Autocar got behind the wheel of this "most astonishing" car. We began: "This coupé is in full production for sale to those who have the ability to handle and the means to purchase such a car. As is well known, the two essentials do not often go together."

After completing the awkward ingress over the very high sills, we found the 300 SL's driving position offered "an extremely good view", with the sloping bonnet "allowing the driver to see the road close up to the car", the driving position adjustable enough for most and the steering wheel "placed at an ideal angle". 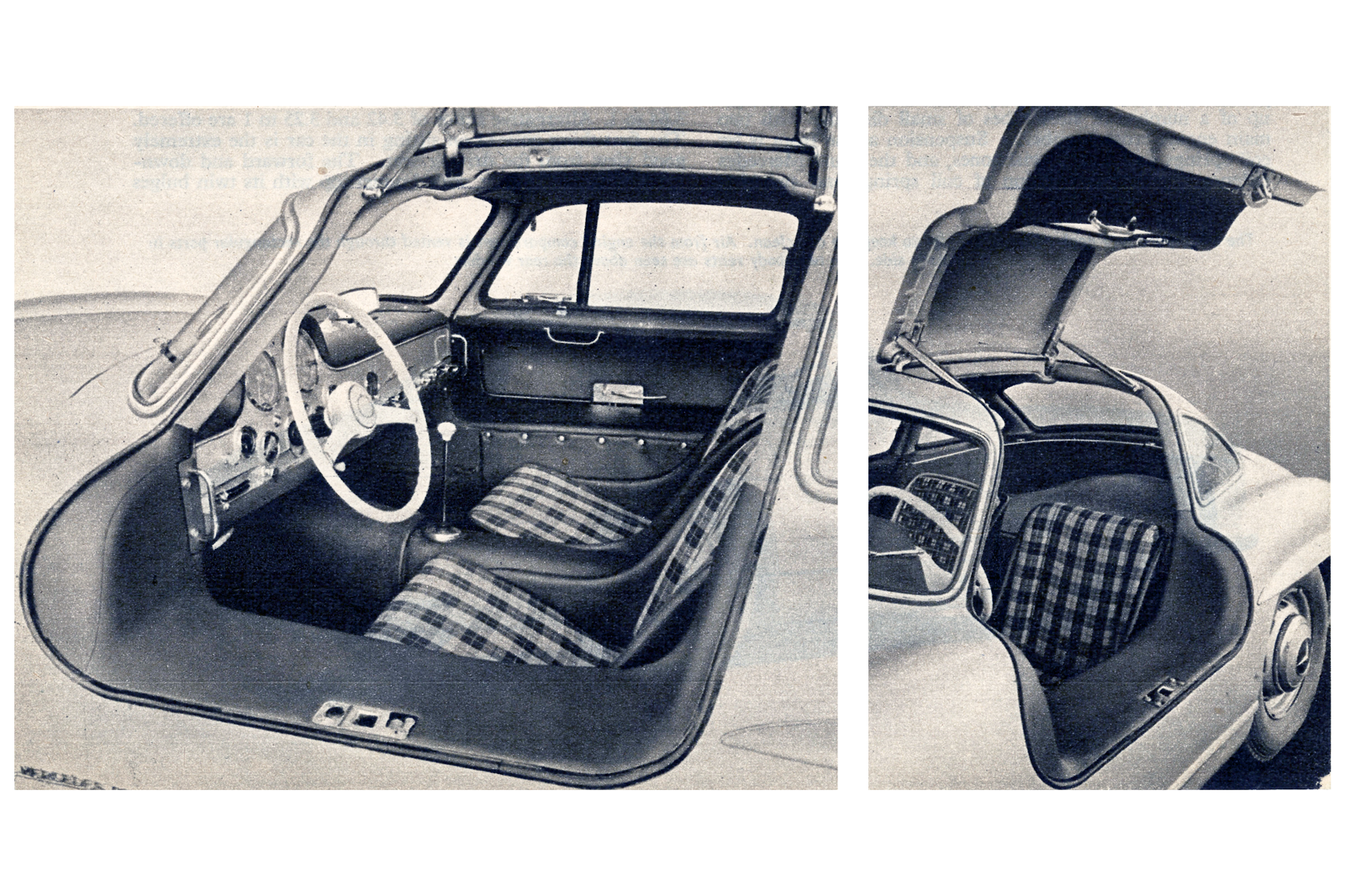 We continued: "The 300 SL is docile and tractable in dense city traffic, but there is no doubt whatsoever that its true place is outside built-up areas, where it can be allowed to come into its own.

"After it has trickled along in third and top gears, the time eventually arrives when second gear can be selected, so that the car really comes to life.

"For a passenger who has not travelled in the 300 SL before, the effect is electrifying. The occupant receives at first a mild pressing back into the seat and then, as the power comes in between 3500rpm and 400rpm, he feels as though he is being rocketed through space. Up to 70mph is available in second gear, and then comes a quick movement into third. The rev counter needle drops back for a second or two and, again at 4000rpm, the effect of being urged forward by some irresistible force is felt.

"There is a somewhat harsh note from the engine, but little exhaust and wind noise. "The acceleration is truly remarkable. The effect up to 60mph is not so noticeable as higher up when, with over 80mph showing, the rev counter needle swinging round rapidly towards the limit mark and third gear still engaged, the car fairly rockets forward.

"Press the accelerator well down even at over 100mph in top gear and, again, there is the feeling of being on the end of a rope that is being pulled hard from in front of the car. The way the 300 SL does it all with so little fuss is almost uncanny."

"The 300 SL's cruising speed is limited not by mechanical factors, but by the road and traffic conditions," we wrote. "It's one of the least tiring cars to drive, in the manner of all high-performance cars except those which are very noisy. 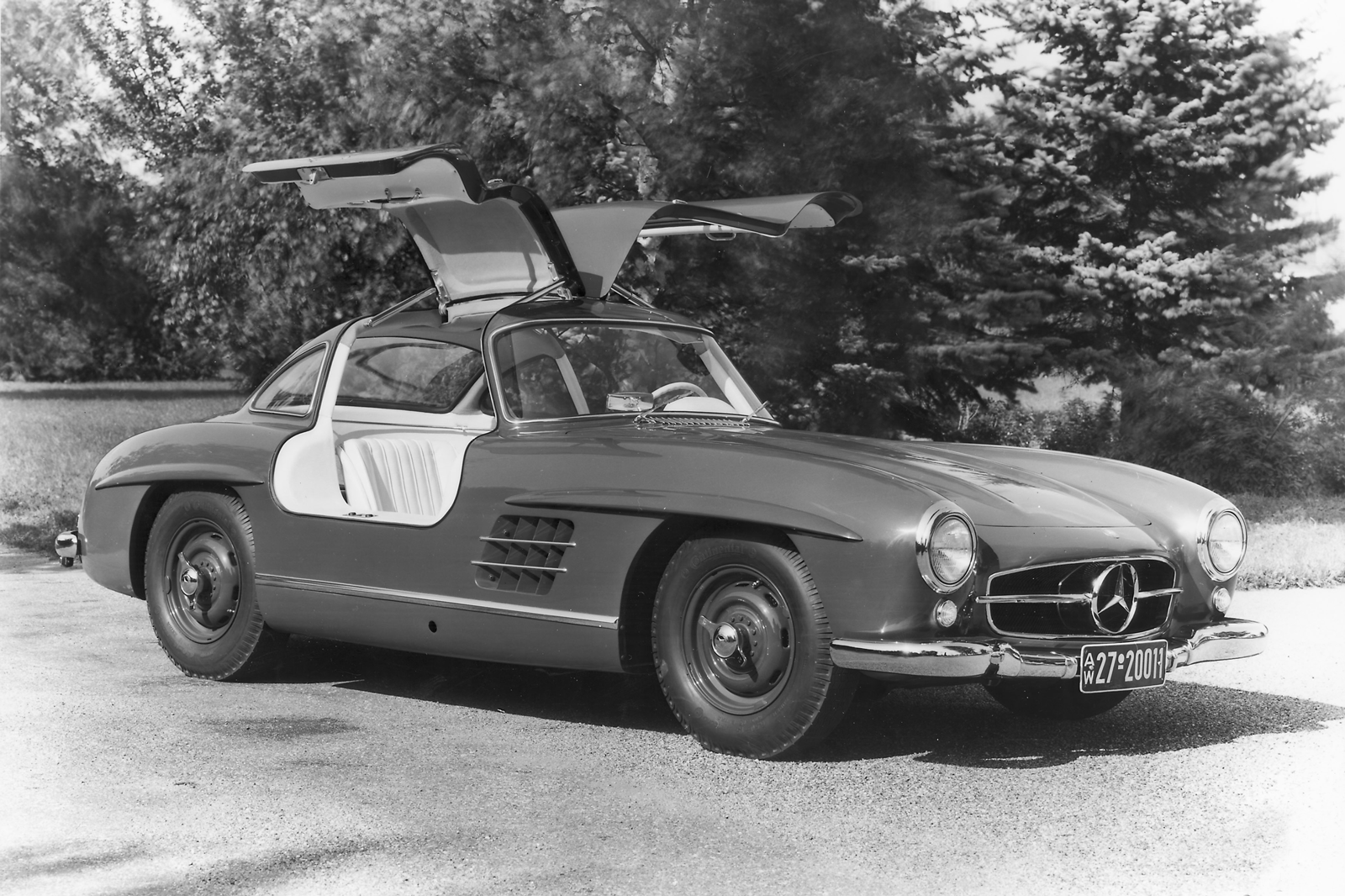 "The acceleration capabilities of the car enable the driver more frequently to overtake slower-moving traffic in safety and so cut the time for a known route by a very considerable margin and with no feeling of having misbehaved by upsetting other road users. Admittedly, they may have wondered what it was that passed them but, by that time, the 300 SL is over the hills and far away!"

Of course, a car such as this must have the ability to handle and stop as proficiently as it can hurtle. Thankfully, the 300 SL did so, and this we considered "part of the character of the car".

"The ride is by no means harsh," we said. "In fact, on one 400-mile journey, a small child was able to sleep curled up on what is essentially the luggage space behind the seats.

"When cornering at the speed of other traffic, the 300 SL goes round firmly on the proverbial rails, taken close to the chosen line and with hardly a movement of the steering wheel."

Indeed, due to lock-to-lock being just two turns, our driver found himself hardly conscious of turning the wheel in order to corner, reminding him "of a fast motorcycle" that "is steered more by leaning the body than by actual movement of the handlebars". 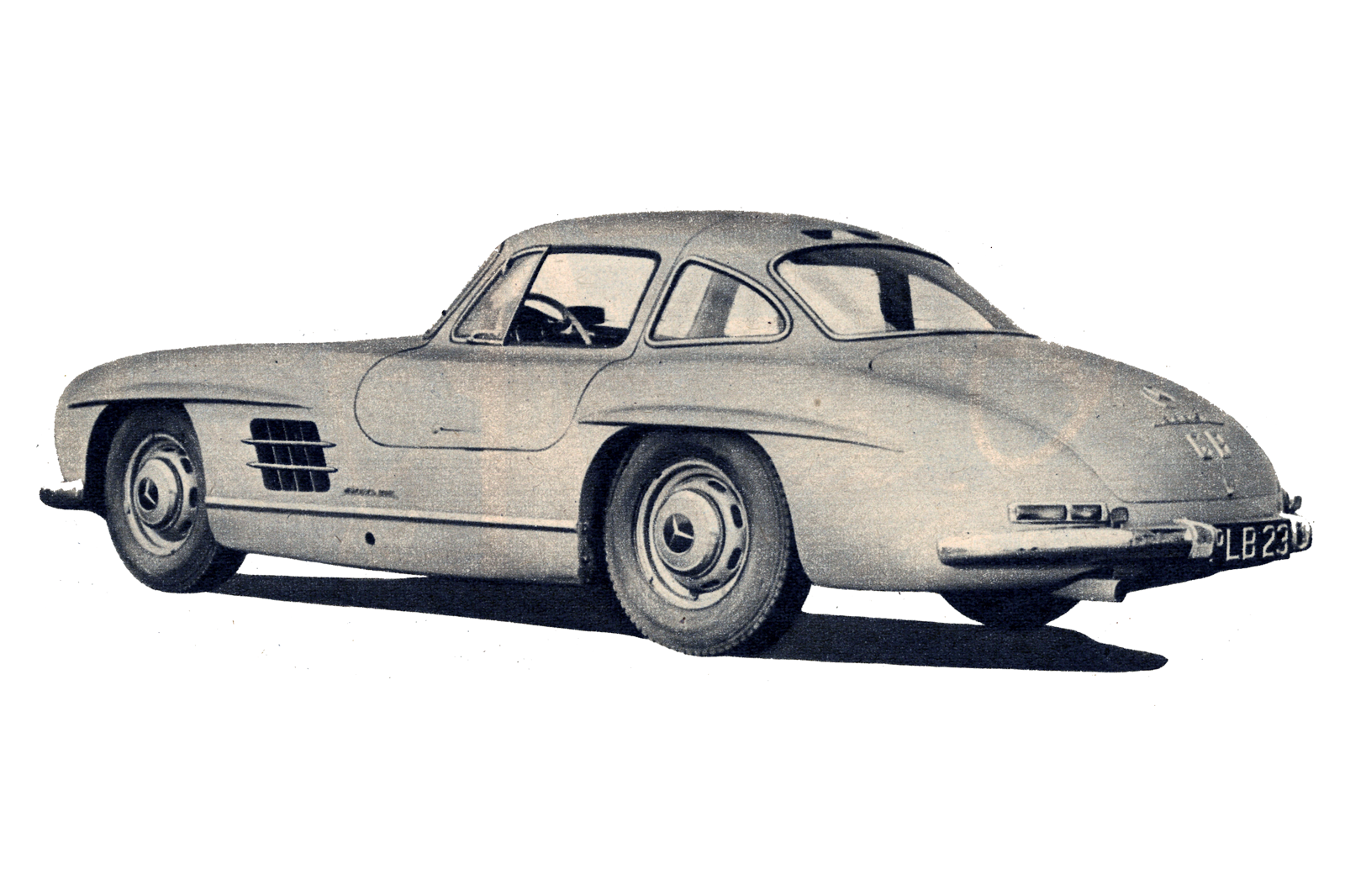 There was a useful amount of kickback from the front wheels and apparent oversteer; "any inclination to ease the throttle round a corner and the rear of the car will tend to swing round". When driving the car round bends, "no trace of misbehaviour" was noted.

We elaborated: "When taking open, very fast swerves, the driver can start to guide the car round just before he enters the corner and then, using the throttle, make the 300 SL come out on the straight in a beautiful movement.

"There is the typical Mercedes-Benz feeling of the swing axles working. On wet roads, the car slides slightly but, with judicious handling, there is no tail breakway. This is a car that teaches its lessons sharply and thus demands respect."

The brakes, meanwhile, were vacuum-servo-assisted and "fully capable of dealing with the high performance of the car". We found, even when used repeatedly on a rapid descent and when taking performance figures, "there wasn't the slightest sign of fade or unevenness", while the pressure required was "comparatively light".

And that other crucial component, the gearbox, had a pleasant gearshift and a smooth clutch that had no slip.

Clearly, Autocar's testers were stunned at this car – after all, it was the fastest production car at a time when traffic would have consisted of Austin Sevens and Morris Minors. Looking back now, it's easy to see why the 300 SL is often billed as the "first ever supercar" and now sells for more than £1 million (rather than the £4392 demanded in 1955).

Wonder what our chaps back then would have thought of the car's "spiritual successor", the much uglier but much faster SLS AMG of 2010.

Easy to see the origin of the new Mercedes 'downturned' front grilles in this!

Is definitely the ugly sister in this company with none of the style or grace of the 300 SL.
View all comments (6)