BACK TO ALL NEWS
Currently reading: Under the skin: The hydrogen-powered BMW that's literally bombproof
UP NEXT
New Kia EV9 primed as premium electric range-topper

Under the skin: The hydrogen-powered BMW that's literally bombproof

Security vehicles, designed to withstand even the most determined attack, are rarely shown or even discussed at motor shows. But at the recent IAA show in Munich, BMW revealed details of a latest concept that is not only bomb (and just about everything else) proof, but powered by a hydrogen fuel cell system, too.

It would be easy to assume that protecting a vehicle from attack is as simple as adding some armour steel plate and glass, but the reality is more complex than that. What if the engine or cooling system is damaged (easy to do) and the vehicle rendered a sitting duck? What about hand grenades, or worse? As well as covering all the options, security vehicles have to look like the normal production versions from which they are derived and be quick off the mark, fast and handle well. (Those J-turns are not just the stuff of movies.)

With the iX5 Hydrogen Protection VR6, BMW wanted to show that it’s possible to have a fully certified protection vehicle that’s also zero-emission. VR6 is a ‘vehicle resistance’ class specified by the Association of Test Centres for Attack-Resistant Materials and Structures (also known as VPAM). The existing BMW X5 Protection VR6 is claimed to be the best-selling luxury ‘SAV’ private protection vehicle in the world, but the difference with the iX5 version is that it is powered by a hydrogen fuel cell system, rather than the mighty, 523bhp M Twinpower V8 petrol engine of the conventional Protection VR6.

The iX5 has armoured passenger and luggage cells made from high-strength steel and includes underbody protection. The underside is also anti-magnetic to prevent the attachment of ‘sticky’ explosive devices. The chassis is heavy duty and further aluminium underbody armour protects against shockwave loads and splintering from grenade attacks.

Protection glass is 30mm thick and designed to provide post- blast protection. Even after an explosion, all windows remain in position, with no openings between glass and body, and all door, body and luggage compartment gaps are tightly sealed. The passenger compartment can also withstand a blast from 15kg of TNT from four metres as well as assault by the world’s most commonly used weapon, the 7.62mm-calibre Kalashnikov AK-47.

The standard version has an aviation- type leak-resistant fuel tank, but protecting hydrogen tanks and their valves needed a different approach in the shape of a non- magnetic, blast-resistant layered structure. That said, composite hydrogen tanks have been shown to be resistant to gunshots anyway and, as usual, these were subjected to burst and leakage tests.

It may seem that zero emissions might be the last thing on the mind of any customer needing this level of security, but these vehicles still have to conform to local laws, which include zero-emission zones they may need to operate in. The iX5 and the blast tests it has undergone should also help to dispel any lingering doubts about the safety of hydrogen fuel. 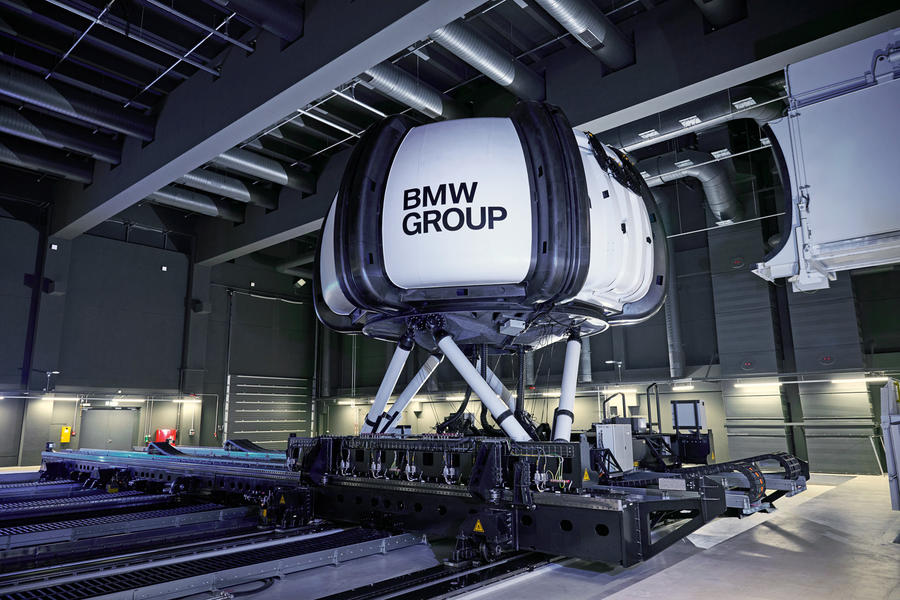 BMW’s new driving simulation hub at the Research and Innovation Centre (FIZ) near Munich has a number of high-end simulators. One of these is the High-Fidelity Simulator Sapphire Space, which stands 10 metres high, is 83 tonnes of moving mass, soaks up 6.5MW of power and can simulate acceleration close to that of the 480bhp M3 Competition.

Rather than hydrogen fuel cells, which are incredibly expensive, why isn't the industry looking at hydrogen internal combustion engines? Lord Bamforgh of JCB clearly thinks it's the way forward. We'd still need to resolve efficient hydrogen production and convert petrol stations to pump hydrogen (but that would have to be done even for fuel cells), but he believes the change from oil ICEs to hydrogen ICEs could be almost zero cost differential. Have a look at the video on Harry's Garage on YouTube. It's an interesting watch.

This car will just be for going to Tesco's and back, and if your that paranoid, you'll have your own supply of Hydrogen, even might get it delivered.

It'll take some flat bed to take that thing to the nearest Hydrogen station some 100 miles away every time it's empty.