BACK TO ALL NEWS
Currently reading: Under the skin: How flat-plane cranks enhance a V8 engine
UP NEXT
Lion's pride: Peugeot 508 PSE vs BMW and Volvo rivals

Under the skin: How flat-plane cranks enhance a V8 engine

Most V8s have cylinder banks arranged at 90 degrees, but some are set at 60deg at the expense of some smoothness
Share
Open gallery
Close
Share story

Like the straight-six engine we looked at in the 23 September issue, the V8 holds a special place in the hearts of petrolheads. If we’re honest about the reason for that, probably 40% of the appeal is down to its power, torque and smoothness, and the other 60% is the glorious sound it makes.

Why does the V8 work so well? It has good inherent balance, packs a lot of cylinders into a shorter length and can produce plenty of power and torque, because there are four power strokes for each revolution of the crankshaft, compared with just two in a four-cylinder four-stroke engine and three in a six. It’s versatile, too, delivering huge refinement for luxury cars, power for sports cars, muscle cars and racing cars, and shedloads of torque for SUVs and pick-up trucks.

What makes the V8 so different to most other engines is that there are two distinct types, and this has to do with the crankshaft design. A V8 can be thought of as four V-twin engines joined in a row. Although there are eight cylinders, the crankshafts have only four crankpins or ‘journals’ to which their pistons are attached by connecting rods. Each is shared by a pair of opposite cylinders, like a V-twin. In a conventional V8, the journals are arranged at 90deg to one another, so looking from the end of the crank, they form a cross, hence the name. A flat-plane crank has journals arranged at 180deg to one another, so the crankshaft lies flat on a surface, and looking from the end, resembles the letter I.

Why the difference? Flat-plane cranks are lighter and, as the crank journals are at 180deg, the firing order moves sequentially from one cylinder bank to the other: left, right, left, right and so on. This means that exhaust pulses follow one after the other, forming an orderly queue through each exhaust manifold and helping to draw or ‘scavenge’ exhaust from the engine more easily. With a cross-plane crank, one cylinder can fire after another in the same bank, so unless using a complex design of exhaust manifold, exhaust pulses collide and scavenging is less efficient.

The combination of a lighter crankshaft and superior scavenging in a flat-plane V8 lets it rev higher and so makes more power. The downside is inferior balance (piston pairs move in the same direction, like in a four-pot engine), meaning it’s less smooth.

The noise is completely different, too. The flat-plane V8 makes that flat blare typical of V8 supercars and race engines, derived from the fact the engine fires like two screaming four-pots together. In contrast, the cross-plane V8 makes that famous mellifluous offbeat burble for which muscle cars are known, thanks to an uneven firing order.

But both types make for an intoxicating driving experience, and it will be a sad day when the last V8 rumbles off the line. 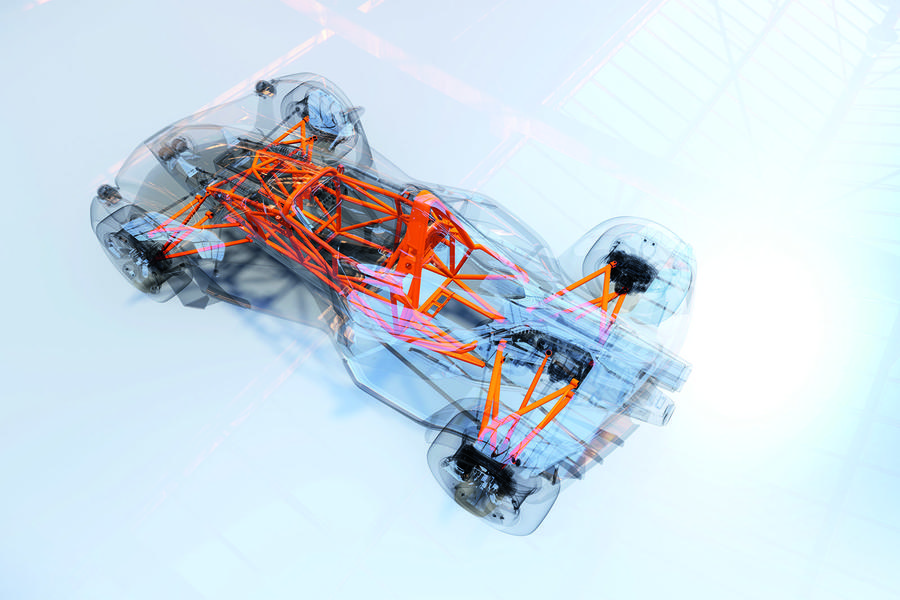 Having successfully used graphene to improve carbonfibre components, BAC is now researching the use of the element nobium. This is ductile (can be drawn out) and malleable (easily worked and shaped). Mixing it with other metals to form an alloy will improve tensile strength (ability to withstand tension) and yield (the point when a metal begins to deform under stress). The aim is to use it to produce lighter chassis and suspension components for the Mono.

Under the skin: Why anti-roll bars still hold sway

I believe that boxer engines etc would

also have the same issue if wearn't for the offset crank they'd sound ordinary and it's the "crank angle" that gives them an idiosyncratic sound. From what I know flat plane cranks can be made to produce more power, I believe Audi tried this method to cheat/gain advantage in DTM in 19992 and got away with it initially despite protests however the protests continued and after round six, the flat-plane V8 was deemed illegal after all. Audi suspended their DTM program with immediate effect and the German manufacturer would not return with a manufacturer effort for over a decade.

TVR and Lotus completely failed when they tried them.

You made no mention of the counterweights routinely fitted to cross plane crankshafts. These damp vibrations, but inhibit revs, and, of course, increase weight.
View all comments (7)