BACK TO ALL NEWS
Currently reading: Under the skin: This EV gear-changer could be a game-changer
UP NEXT
Hope for Bloodhound LSR project as sponsor talks start again

Under the skin: This EV gear-changer could be a game-changer

Rarely do we come across something in the car world that hasn’t been thought of before, but the Ingear multi-speed transmission design from Canadian firm Inmotive is nothing short of genius. Chief technical officer and keen cyclist Anthony Wong began pondering the derailleur gears on his bike and wondered how it would be if, rather than shifting the chain across the gears in that noisy and clunky way, he could think of a way to move the gears beneath the chain. The result is a prototype transmission for EVs that is expected to match the efficiency of a single-speed helical gearset when it reaches production. Inmotive claims a 7-15% improvement in an EV’s range using Ingear and an improvement of 15% in acceleration

Ingear isn’t a CVT and it doesn’t need any clutches or synchromesh. All of that is replaced by an extremely robust BorgWarner Morse Hy-Vo silent chain, which is not only quiet but also capable of handling high torque. Single-speed EVs normally have a first-stage reduction gear and a second-stage reduction gear, then a differential like any other car transmitting torque to the wheels. The Ingear system replaces the second reduction gear and surrounds the differential so no extra space is needed. The chain transmits torque from a drive sprocket to a driven sprocket and it’s in the driven sprocket that the magic happens.

A third sprocket is used as an idler so that the chain forms a triangle. The driven sprocket is in two parts – a larger, low-gear sprocket and, inside that, a smaller, high-gear sprocket. The low-gear sprocket is made in retractable segments that can move sideways, one by one, clear of the chain’s path. As each segment moves away, the chain transfers seamlessly and in a split second to the smaller sprocket, engaging high gear.

As that happens, both the high and low gear engage with the chain for a couple of milliseconds so there’s no interruption of torque, in the same way as a dual-clutch gearbox or CVT but simpler and more efficient. As the shift takes place, the main traction motor has to significantly reduce or increase speed so its controller uses positive or negative ‘torque fill’ to ensure the transition is completely smooth. That said, the system can do Sport and Comfort modes, depending on how the software is configured. In reality, the shift is completed in milliseconds and less than one rotation of the road wheels.

Wong first made a model in a spare bedroom using a small CNC machine bought on eBay. A full prototype was expected to shift at up to 300rpm, with things like wind turbines in mind, but in fact made 1200rpm. The early attempts took the drive through an off-the-shelf carbonfibre-toothed belt but proved that the tensioning system worked and that shifting was completely reliable. Chief engineer on the project Jarek Lutoslawski realised the design would need to be simplified to make it feasible and cost effective for the car industry to produce. That would mean losing half the components of the early versions without compromising functions. In high volume, it is expected the latest, simplified design would cost car manufacturers less than £108 per unit. The unit can be scaled to fit different-sized vehicles and is installed in a Kia Soul EV for evaluation.

Conti gets its big brake 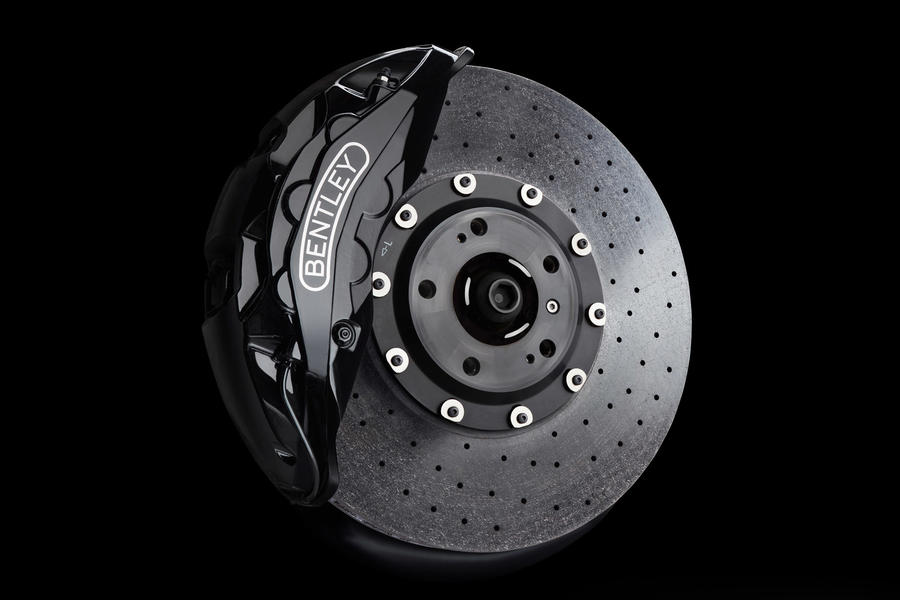 The Bentley Continental GT Speed Coupé and Convertible have the largest brakes of any car in the world, at 440mm. The 10-pot calipers with carbon-ceramic discs weigh 33kg less than a conventional iron disc system and stop the car in 60m from 80mph. Fade is minimal, with 10 consecutive stops adding only 1.1m to the braking distance. The brakes are the result of a tie-up between Bentley, Brembo and Akebono.

You need to see the company's video to really understand how this transmission works. It's crude but simple - I guess the sophistication comes from the electronic control which smooths what would otherwwise be a jerky transition between the two ratios. But if it produces the gain in performance / efficiency claimed, then it seems like a brilliant idea - much better than adding more battery weight.